The common phrase I heard this past week was, “Welcome to being a homeowner.” Lots of things went wrong and took way longer than they were supposed to take, and I even had the pleasure of running into an ex because the week was just that awesome. But enough about me, let me tell you what is happening with the house.

I got my awesome new Whirlpool fridge from the VIP program that a friend had access to. We plugged it in and it worked for all of 3 minutes before the control panel went dead. The lights still work, the water dispenser thingy works, and yet the fridge does not cool off because the little digitally lit snowflakes melted in the heat. A technician is coming out on Tuesday. 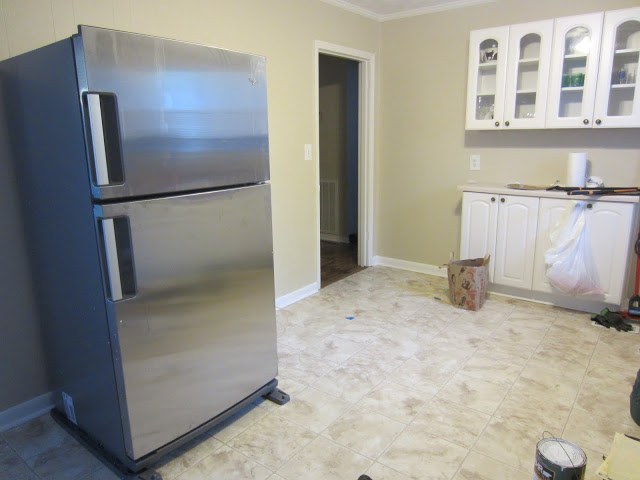 I made an unpleasant discovery in the guest bedroom. It is never wise to leave me alone in a house with a crowbar. There were visible tape lines all around that room and we’ve been thinking we’d need to repair the drywall in there. Well, people, I have an announcement to make, it’s not drywall. It’s paneling…with a couple layers of wallpaper…that were painted over. Son of a biscuit!!! I immediately started tearing the room apart, and in the manner of Ty Pennington, I have made it my “special project.” 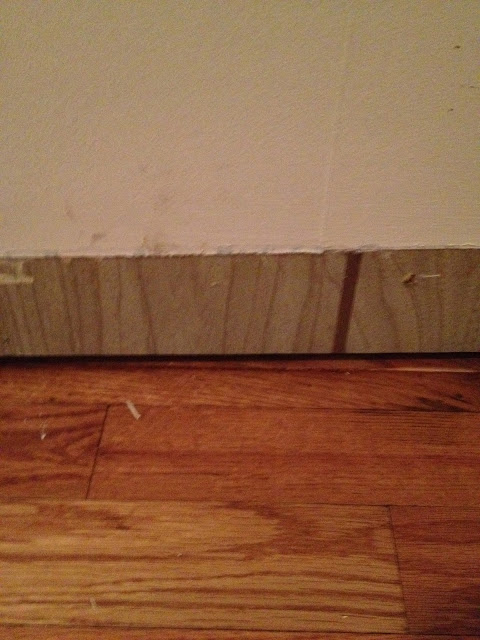 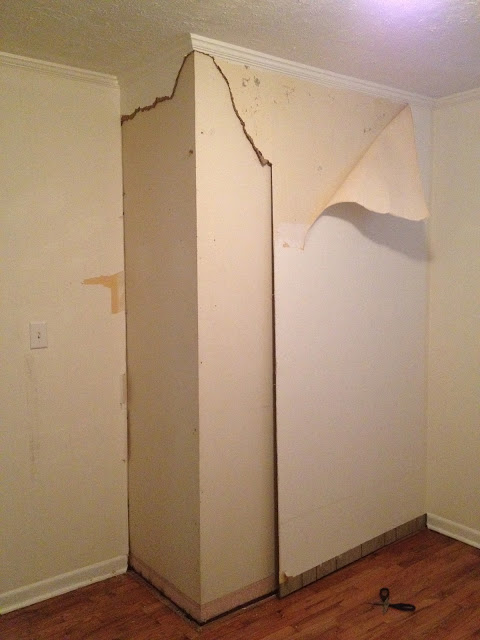 Rob has been working so hard on the bathroom.  The Hardie board backer is going up for the tub surround.  This will provide moisture-proof backing for the glass tile. 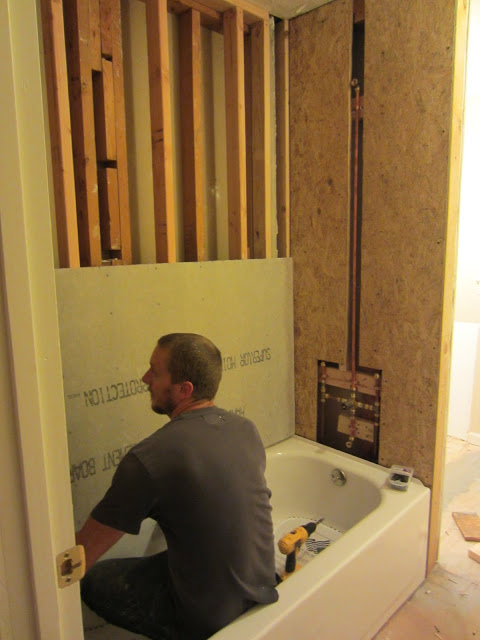 I continued tearing the guest room to shreds with the righteous anger and incomprehension of how someone would wallpaper paneling and then PAINT over it!!!  Morons.  Thank goodness there is drywall underneath.  It’s in rough shape, but we can fix it up.  I can’t even describe the smell of that paneling without making you sick.  It smelled a bit like sewage.  As I was tearing everything down, the pile in the dining room grew larger and more overwhelmingly smelly. 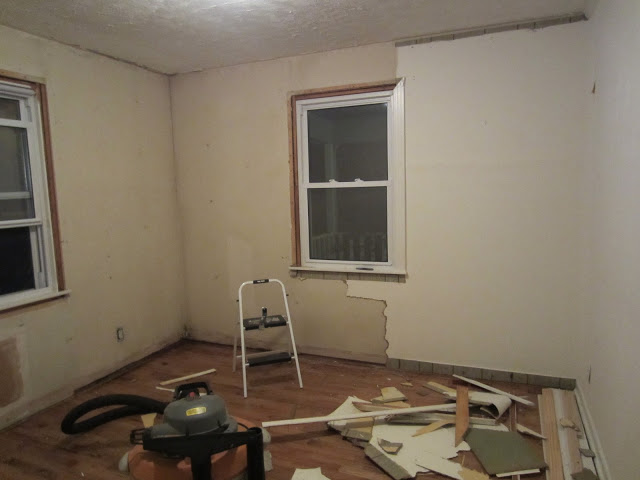 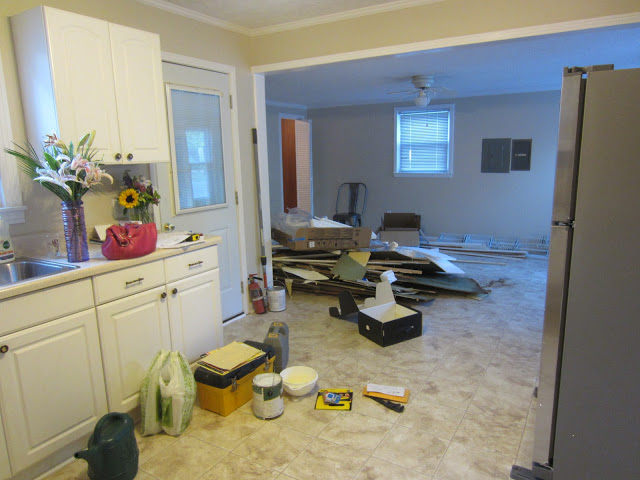 Lacey got all dramatic with the explosive remodeling noises happening throughout the house, so she decided to find a quiet corner to chill. 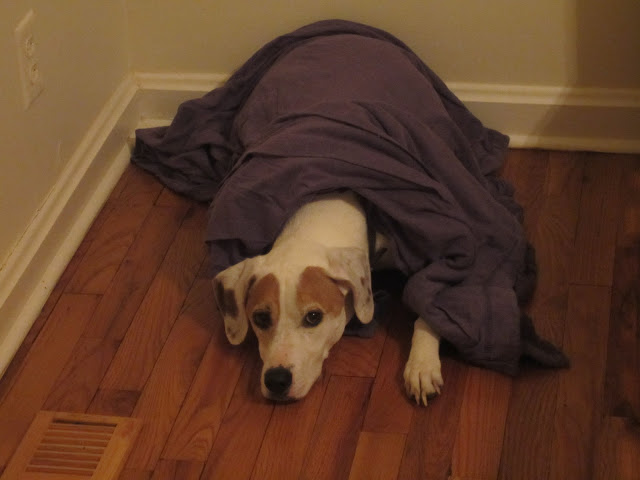 The Hardie backer is up!!!!  How exciting!  Onto the floor! 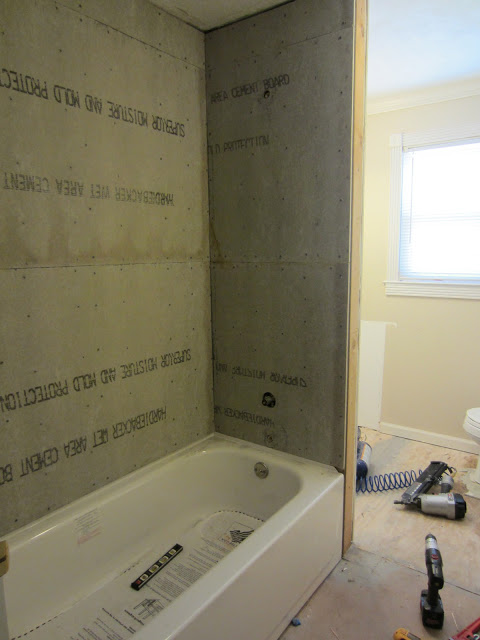 I made another awesome discovery in the guest bedroom.  In the picture, it just looks like a white square on the wall, however, be not deceived by the innocent white square.  After whoever made this nightmare ran out of paneling on that side of the room, they smeared drywall mud all over the empty portion of wall to make it nice and even.  Needless to say, that part of the wall will need to be replaced. 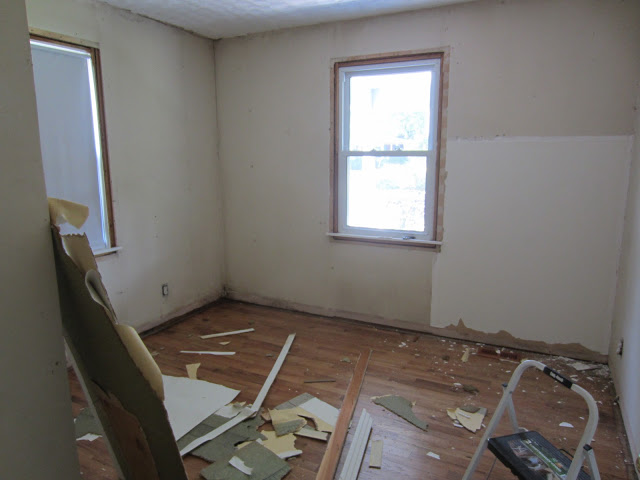 My new dining room rug was delivered on Friday.  I ordered it online from the Home Decorators Collection to match the Jacqueline Penney picture I am putting up in there.  After demo-ing the guest bedroom and filling Rob’s truck with the debris, I held my breath, rolled out the new rug, and did a little dance across it.  The color is EXACTLY what I wanted and so much prettier than the picture online.  I could not be more pleased and I think it will look so beautiful in the dining room.  A burst of color that just begs to be dived into! 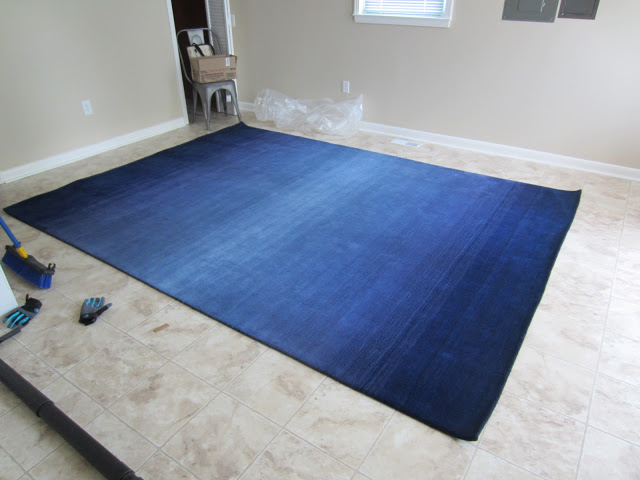 HH Gregg is where I purchased my stove, and while I was very pleased with the deal I got, I could not have had a more horrendous customer service experience.  I will never buy anything from that place again.  The salesperson was abrupt and unhelpful, the cashier had no clue what she was doing and took 15 minutes just figuring out the computer while looking like a brick had just hit her in the skull.  The manager was also less than helpful when asked what to do if the item were discovered to be damaged.  His words were to “just bring it on back” like it was an ill fitting pair of shoes or something, as opposed to a hundred pound item.  THEN, as if the attitude weren’t enough, we drove there to pick it up on Saturday (when they told me it would be available) and the delivery truck hadn’t arrived yet and they were not able to tell me when it would get there.  I was livid when we left the store because that one mishap cost us hours of time and frustration in our plans over the next 36 hours.  After much angst, a trip to the dump, and many murderous thoughts later, we got the stove.  However, the sales manager who helped us get it out of the store neglected to tell us we needed to buy a power cord, which would have been much more helpful than the Verizon phone pitch we got while signing the pickup form.  Unless you want to be treated like crap, don’t shop at HH Gregg.  This is not where these appliances will remain…they’re just there until the kitchen gets built…so ok, they’ll be there for a long time, but we won’t think about that right now. 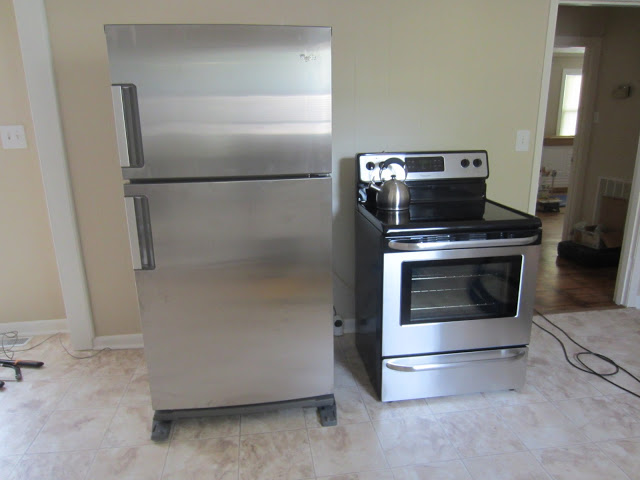 Today, Rob worked wonders on the floor of the bathroom.  I seriously cannot say enough good things about the quality of work he is doing, I am so impressed.  The original sub floor was a nasty conglomeration of particle board and plywood that was water damaged, so he pulled all of that up to reveal the slats on top of the joists.  All of this after removing the original toilet, which was a nasty business, to be sure. 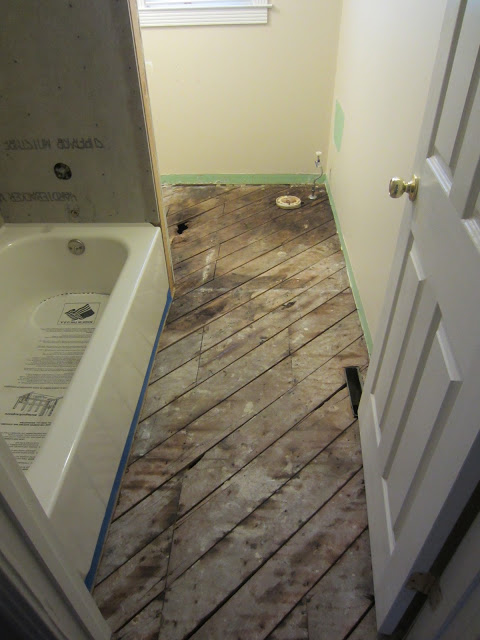 As you can see, some of the boards in this area needed a bit more support, so Rob went under the house and nailed a 2×6 to the parts with holes or shaky boards. 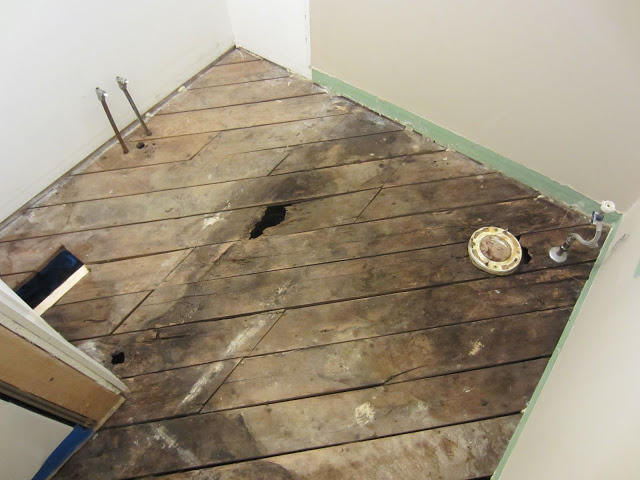 While he was doing all of that and cutting the 1/4″ Hardie board for the sub floor, I decided to tackle the bamboo in the backyard.  While bamboo is a lovely plant, it is very invasive and needs to be controlled.  There is a lovely stand in the corner of my yard that is obscuring two large viburnum bushes that were probably planted years before the bamboo forest began to encroach.  Here is a pic with the evening sun shining through. 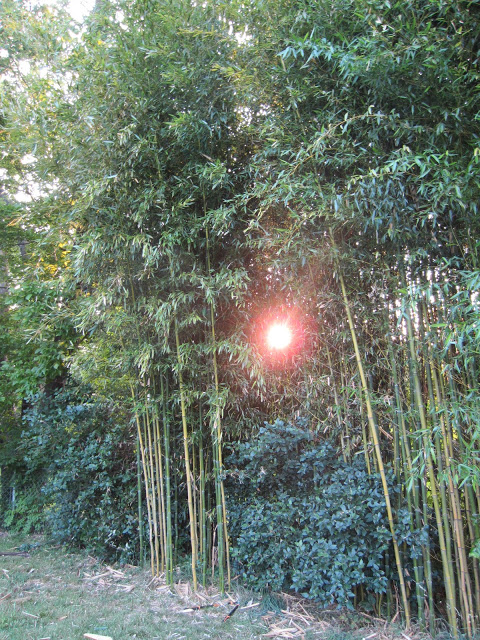 My friend, Charlotte, just built a lake house and needs some bamboo for her shower wall.  I cut down quite a few pieces and cleaned the leaves off of them and piled them next to the shed.  Obviously, I will have to get a panda bear. 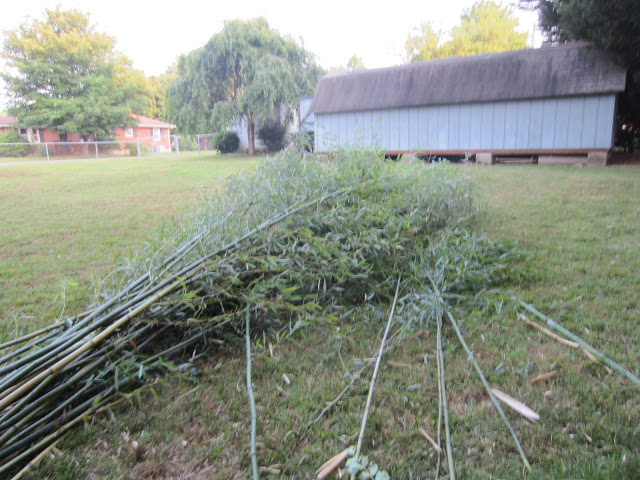 While I was cutting the trees, I noticed the most glorious beetle!  It was an iridescent red and blue that just shone in the fading light.  I tried to find a picture online and the closest thing I can find was a picture of the larva of the Blue Bug, which eventually grows a hard blue shell after the red disappears. 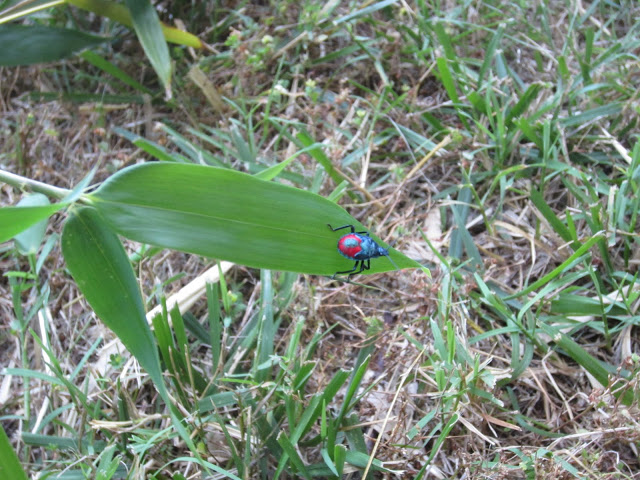 I came inside to find the floor all finished and ready for tile!  It’s almost a bathroom again!!!  Rob added silicone around the toilet ring and the tub, so water leaking and damage will no longer be an issue.  What a job well done! 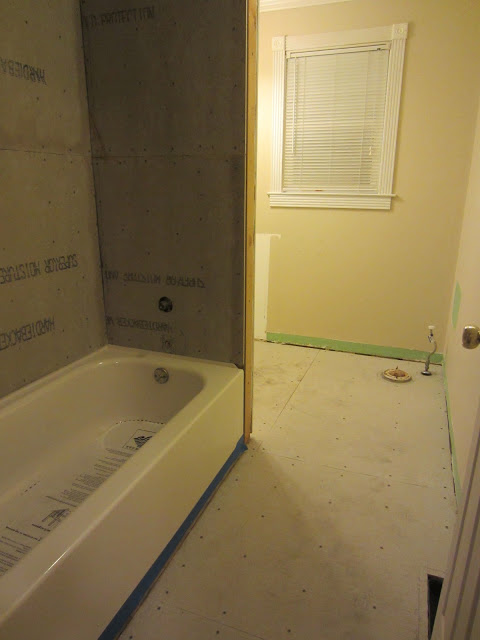 We are both exhausted, sore, and beat up.  There were a couple of times this past week when I indulged myself in a meltdown.  I whined pathetically while standing in the middle of my demolished guest room asking Rob, “Did I bite off more than I can chew?”  He answered sympathetically, “Maybe for the first two weeks.”
« Birthday Weekend in the New House!
ASK FOR DISCOUNTS!!!! »