November was a phantom month.  It came and it went.  It was there and then it simply…wasn’t.  To say I have been busy doesn’t really describe what I’ve been up to.  Busy for me might look different than busy for other people.  My friends who have children (I don’t know how they do it) know a kind of busy that must be exhausting and exhilarating all at the same time.  For me, busy looks like traveling for work, traveling for family and friends, maintaining friendships outside of work, cooking, cleaning, maintaining my 1/2 acre of ground, cleaning gutters, learning Italian, maintaining a relationship, maintaining my faith.  All of these things signal a lack of time alone, which for me, is utterly exhausting.  There is peace and regeneration in time spent alone.

The weekend before November hit, there was one task that had to be finished.  Planting trees.  I wanted to plant a maple that would get bright red in the fall, along with two apple trees.  I settled on an October Glory Maple and two Honeycrisp Apple trees.  Albert Camus once said that “Autumn is a second spring when every leaf is a flower.”  I chose the maple based on this lovely leaf. 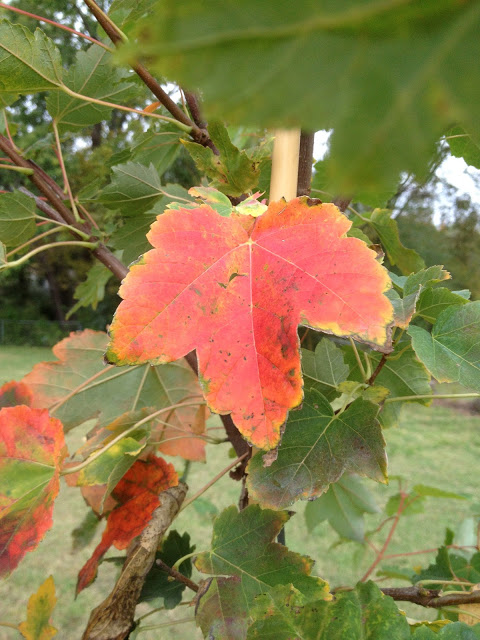 And I chose the Honeycrisp because I love the taste of the variety and they are $2.99 a pound when in season, so hopefully I can save myself some money and get some lovely apples!

To plant the maple my neighbor, Lindsay, came over and helped me dig a hole in some of harshest, rockiest clay soil, I’ve ever seen.  Rob helped separate the soil from the grass while we dug. 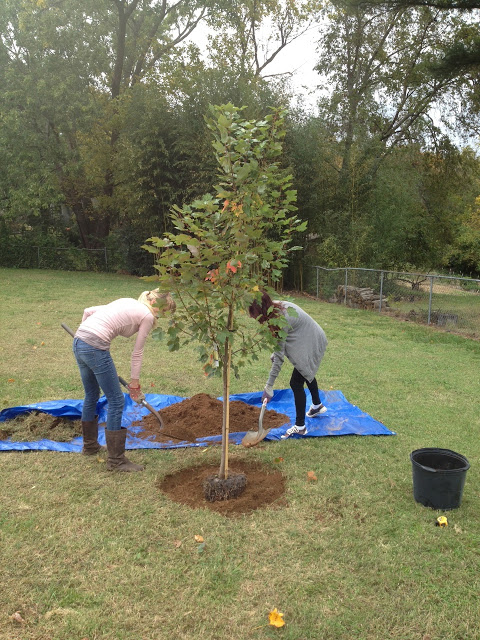 After watering the tree as we went, while piling a bit of mud up, we covered the bottom surface with mini pine nuggets.  Over the next weeks, I watered the tree every few days and waited impatiently for the color to change to a cheery autumn red.  More on that later… 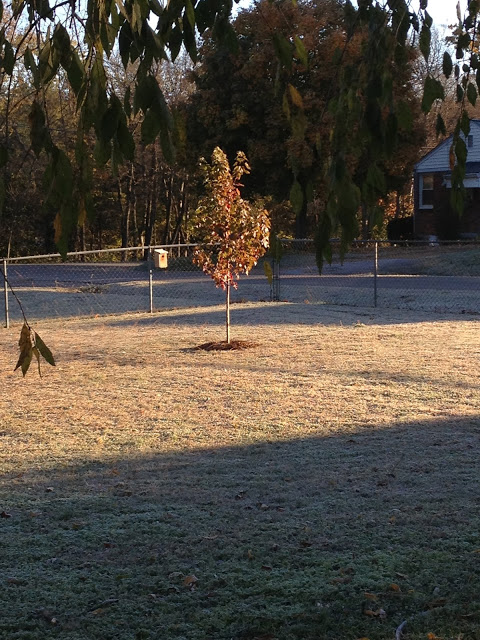 I decided to put the apple trees in the same part of the yard.  This time I dug alone and almost immediately ran into some nasty rock with my shovel.  Due to the changing daylight and lack thereof in the evenings, I was forced to wake up early in the morning — which I hate to do, by the way — and dig like a maniac.  The neighbors must have thought me mad.  I got out there with a small spade and used the hammer on top of it to break up the stone, a miserable task.  How a tree would make it in that soil, I could only guess.  I threw some manure in those holes and hoped for the best.  Here’s what happened. 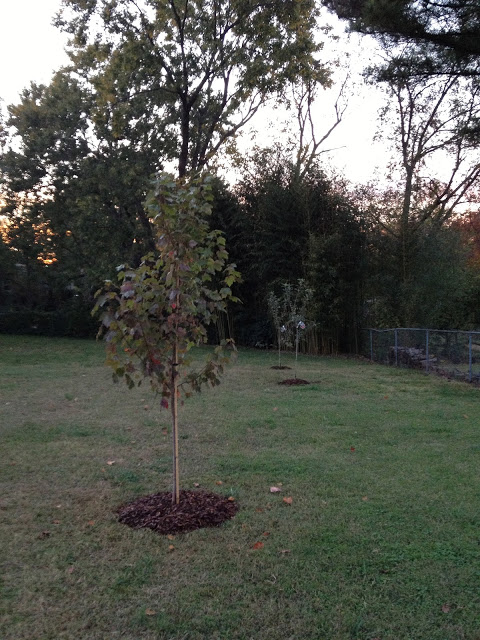 There is a Welsh proverb that says “A seed hidden in the heart of an apple is an orchard invisible.”  These two little trees are my mini orchard, sort of visible, with a bit of tender hope attached to them.  There are two other apple trees close by in the neighborhood, so hopefully they will pollinate this spring. 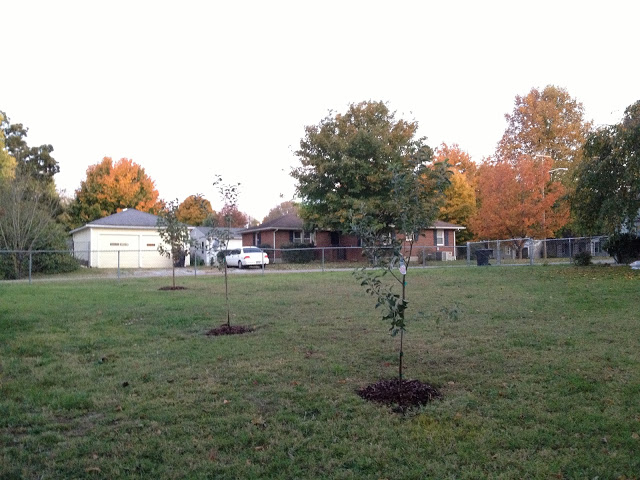 A couple of short weeks later, the maple put on a brilliant little show, just before the bluebirds returned to their new house for the first time.  Bluebirds use these houses in the winter to nestle in for warmth.  Apparently you can even make heated ones!  Now the little birds will have a tree to perch in when they nest in the spring. 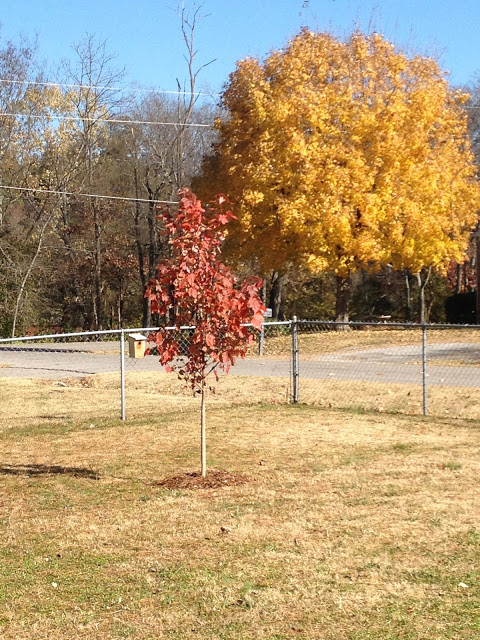 As of today, I am happy to report that all trees are still alive!!!  They are standing straight and will hopefully survive the winter.  I also went to the Biltmore in late October and got some bulbs to plant around the base of the maple.  So excited to see these bloom in the spring! 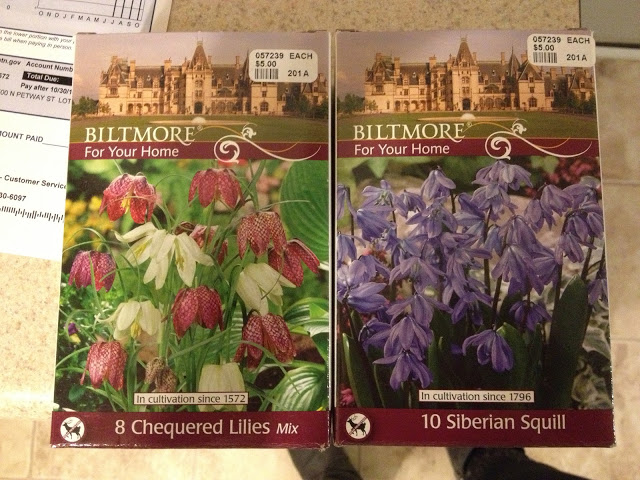 The fall brought with it a melancholy beauty.  I always enjoy nature’s brightest display with the knowledge that it ushers in the cold barrenness of winter.  Small changes like leaves accumulating under the last roses are bittersweet. 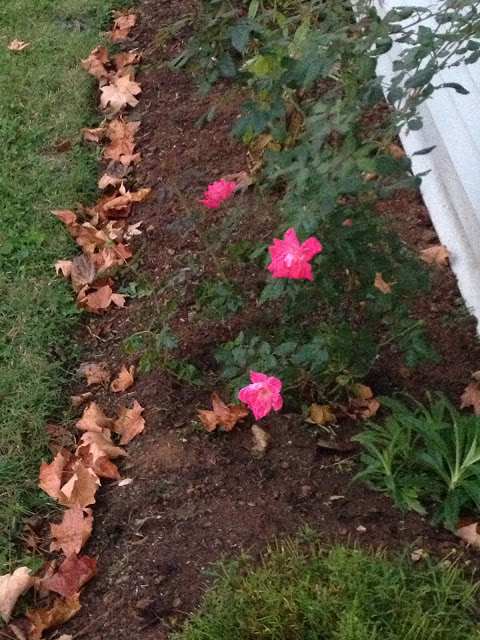 One morning in the cold I noticed this monarch butterfly clinging to the butterfly weed.  The wings were malformed and there is simply no way the creature will finish its migratory trip to Mexico, but I have a soft spot in my heart for monarchs from raising them when I was little.  I sat with this one for a moment and appreciated how much effort it must have taken to escape from its chrysalis into the cool breeze of fall. 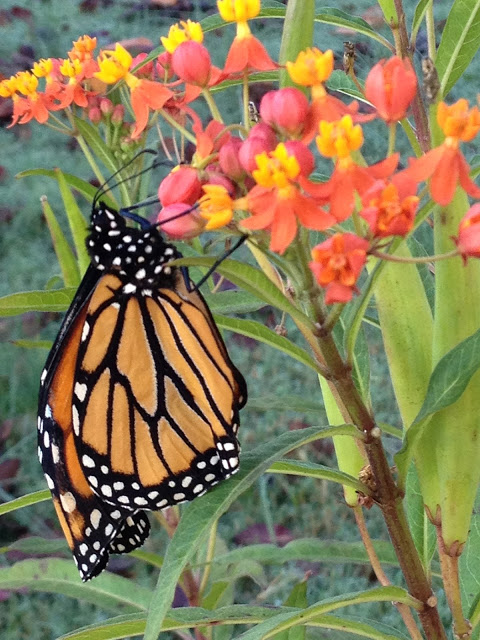 And then the happiest surprise came when I noticed a sunflower growing in the Japanese Maple planter! 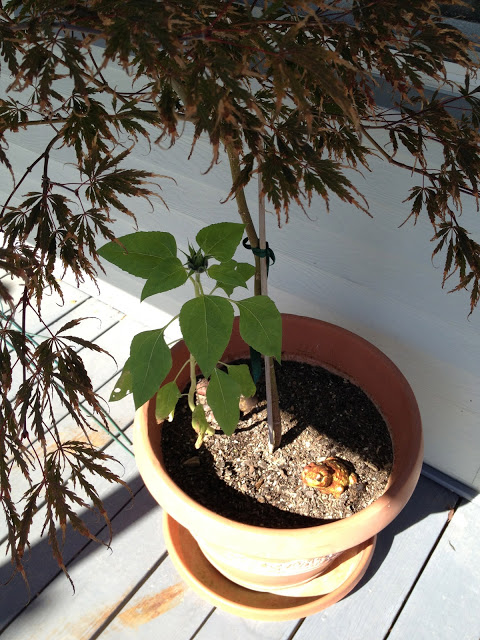 A frost had already come, but this determined little sprout refused to give up.  I couldn’t believe it would actually survive the cold until I went out to the car one morning to find the brightest yellow bloom smiling at me. 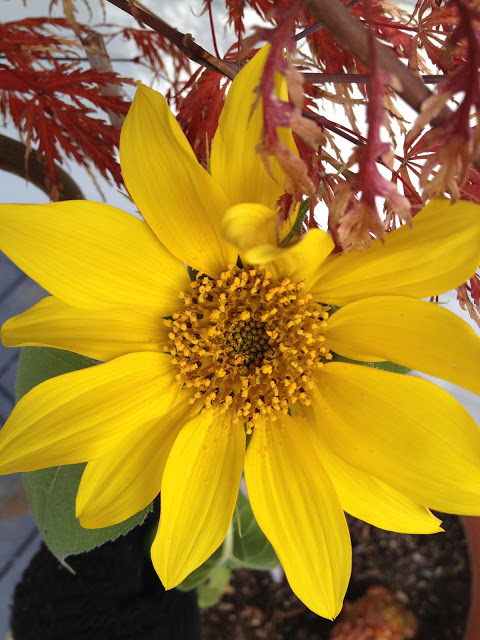 There is only one thing left to do in the yard.  The sick plum didn’t pull through and therefore, needs to be pulled out.  The roots are quite insistent that it stay in the ground, but I’m too afraid a disease will spread to the remaining plums.  This is what’s left.  All I can do now is buy a hatchet to sever the remaining roots.  Then the yard will be ready for winter and all it brings. 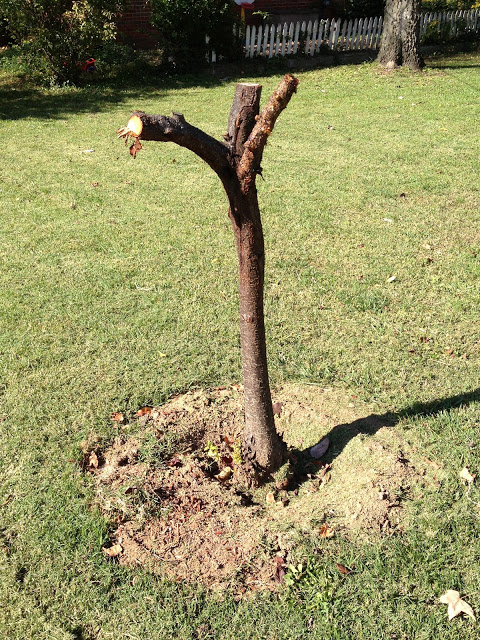 The first hard frost was beautiful.  Some of the flowers survived, and some simply succumbed to the beauty of the ice before breathing their last.  At this point, I’m ready for the yard to be done.  The sooner winter takes over, the sooner spring will be here! 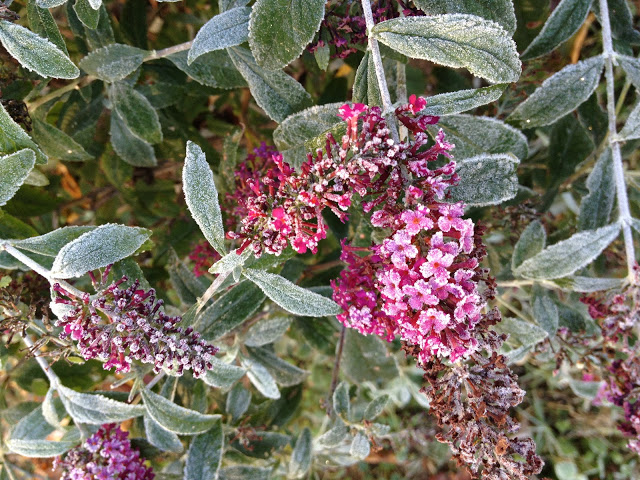