This past Saturday it snowed, so Sunday seemed like the perfect day to break ground for a vegetable garden.  Rob was able to borrow a tiller from a friend and we set to it.  Once again, like every project with this house, I thought this would be an easy task that would take like 30 minutes max with a crazy big tiller…no. 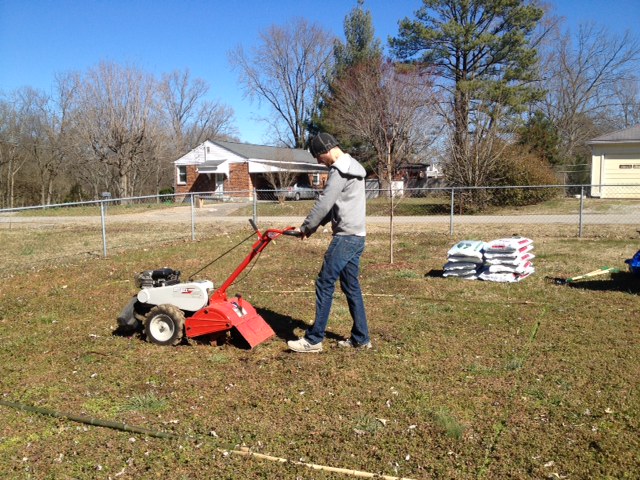 I decided that I wanted to do a 12′ x 18′ plot, which would provide plenty of room for several types of vegetables, but also not be overwhelming to keep up with.  When I laid the bamboo out in the yard, the space looked very small to me, but when the tilling started, I thought, “Oh man, what on earth am I getting myself into?”  Pun possibly intended. 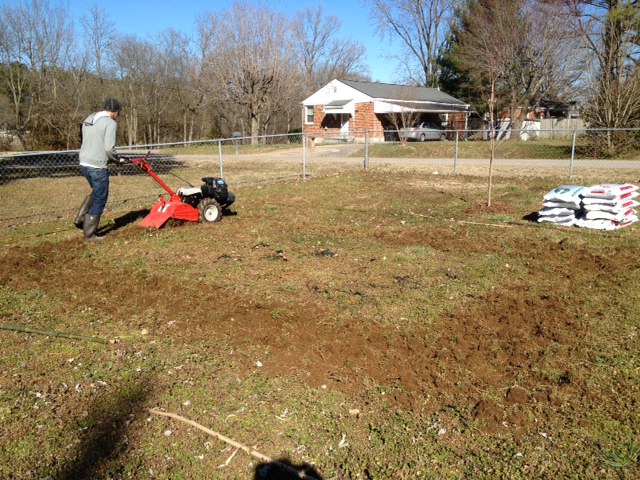 The soil in my yard is a nasty mixture of clay and rocks that doesn’t lend itself to digging.  It took about three rounds of tilling to get the soil to a workable consistency before adding amendments.  We also discovered a lovely 12″ diameter concrete footing on the edge of the plot which caused some internal swearing and readjusting the layout in my mind.  As Rob tilled, I was raking the largest clumps of grass and roots in an attempt to delay the inevitable onslaught of weeds.

Since the soil in these parts is so rough, we added some organic humus (not to be confused with hummus, which is pronounced differently) along with some good old fashioned horse shit.  That’s right, nothing gets those veggies going like a healthy dose of manure.  It looks like Rob is doing all the work in these pics, and it would have been an impossible task without him, but I promise I was helping!  I have the muscle aches to prove it! 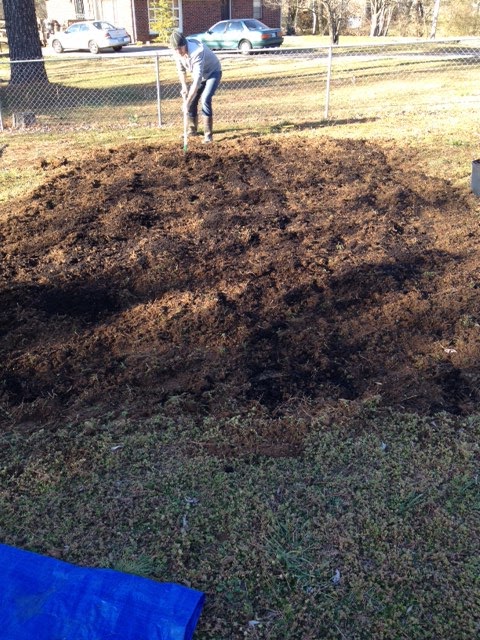 So this is what we ended up with.  A lot of weeding still needs to be done, and I plan to also add some lime, and possibly some more of the organic humus (not hummus) to soften the soil up a bit.  Right now the soil is most likely having acidity issues due to its clay-like nature and pine needles from a nearby tree.  The lime will add a bit of alkalinity that will enable the plants to better absorb the beneficial nutrients from the dirt. 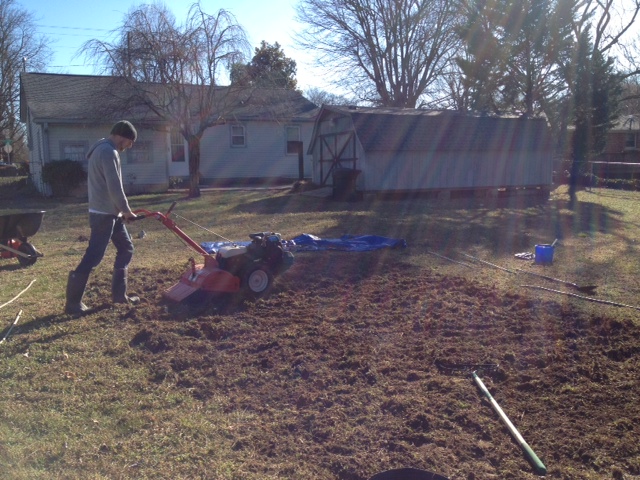 The soil will be able to sit and relax until April 15th, when the growing season officially begins in Zone 7.  So what am I planting???  Sweet Slice Cucumbers, Heirloom French Zucchini Ronde de Nice, Heirloom Icebox Watermelon Doll Babies, Nickel French Filet Bush Beans, True Lavender, Sun Gold Cherry Tomato, Giant Belgium Heirloom Tomato, Cherokee Purple Heirloom Tomato, Chives, and some Basil seeds my Uncle John smuggled from Italy.  Most of the seeds were ordered from Swallowtail Garden Seeds, some were purchased at Yarrow Acres, and the rest fell into my lap.  I’m terrified.  I suck at growing seeds.  I can keep plants alive, and can find my way around a garden, but seed starting is a whole different ball game, and I can only hope these things survive.  Here’s the arsenal. 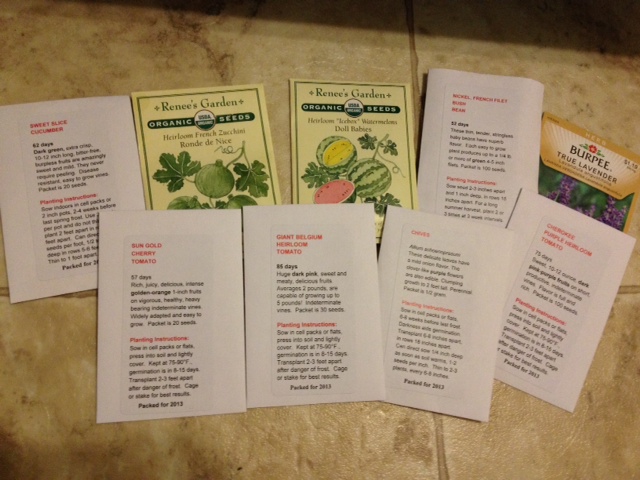 Used berry containers, used pots from the Hens & Chicks, and a flat of small pots given to me by a friend.  I broke down and got seed starting soil, which I hate.  The stuff is so fine that when I tried to water it, there were lots of bubbles and the water was draining through the soil, but not actually making it wet.  ARGH!  So I gave up on the watering can and started using the sprayer in the sink.  What a mess.

The seeds were also so tiny, I was having multiple heart attacks trying to plant them just right. Tweezers ended up being the tool that saved the evening.

I have nowhere in the house to put these seeds where they’ll get adequate light other than the laundry room, which is not a south-facing room…it’s also not heated.  I’m going to put a space heater in there at night and see what happens.  Not a totally ideal situation, but I’m hoping the warm weather gets here soon. 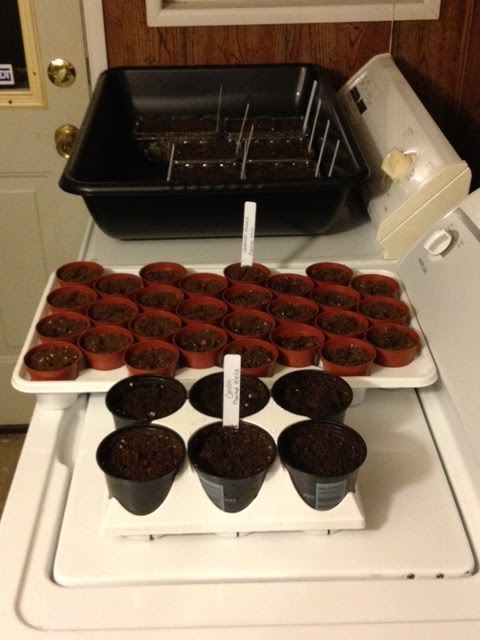 Now I wait to see if this endeavor is a total failure or not.  It’s quite amazing to think that towering plants can come from such tiny seeds, but I’m excited to see what happens!  The beans, cucumbers, zucchini, and watermelon will be directly sown into the ground in April.  The prospect of being able to grow food is such an amazing thought, especially since I’ve been particularly discouraged by the supermarket produce sections of late.  Books like The Dirty Life and You Grow Girl have inspired me to want to use the land I have for something beneficial.  Gardening is a physical effort that gets the body moving, a spiritual effort since many events in life are related to growth, and a mental effort since a bit of learning is required.  I think the quote that sums it up best for me is, “If you have a garden and a library, you have everything you need.”  Thank you, Cicero!

Previous Post: « Hens And Chicks: What’s The Fuss?
Next Post: Dallas: I Think They Have A Sports Team There »