It feels like summer is beginning to make its first appearances here.  The days are becoming too hot to work in the sun for long amounts of time and the evenings are perfect for lazy walks into downtown Franklin.

Last year a ton of work was done inside the house, but this is officially “the year of the yard.”  I’ve been busy planting flowers, making some new beds, and getting the vegetable garden in shape for summer.  This has required hours of time in the evenings and on weekends, but I think that the more I get established this year, the easier it will be since the beds will just require maintenance in years to come.

The flower bed on the side of the house needed some work, and I have a feeling will be a work in progress for a little while.  I extended the bed to go along the fence so I won’t have to mow there. 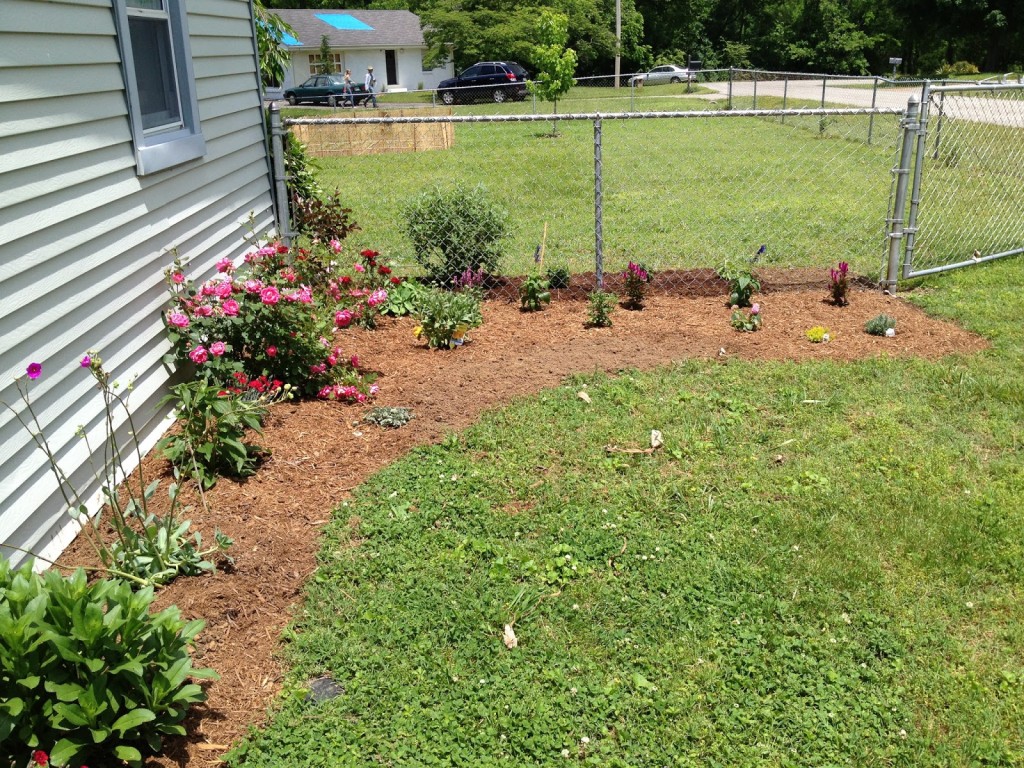 Right now it’s a riot of color with roses, celosia, several salvias, dianthus, lantana, lavender, seedum, and a crape myrtle.  Might have gotten a tad carried away, but I’m hoping these will fill in the spaces as the season progresses.  The clashing pinks and reds are driving me a little crazy, but maybe the butterflies will go nuts over them. 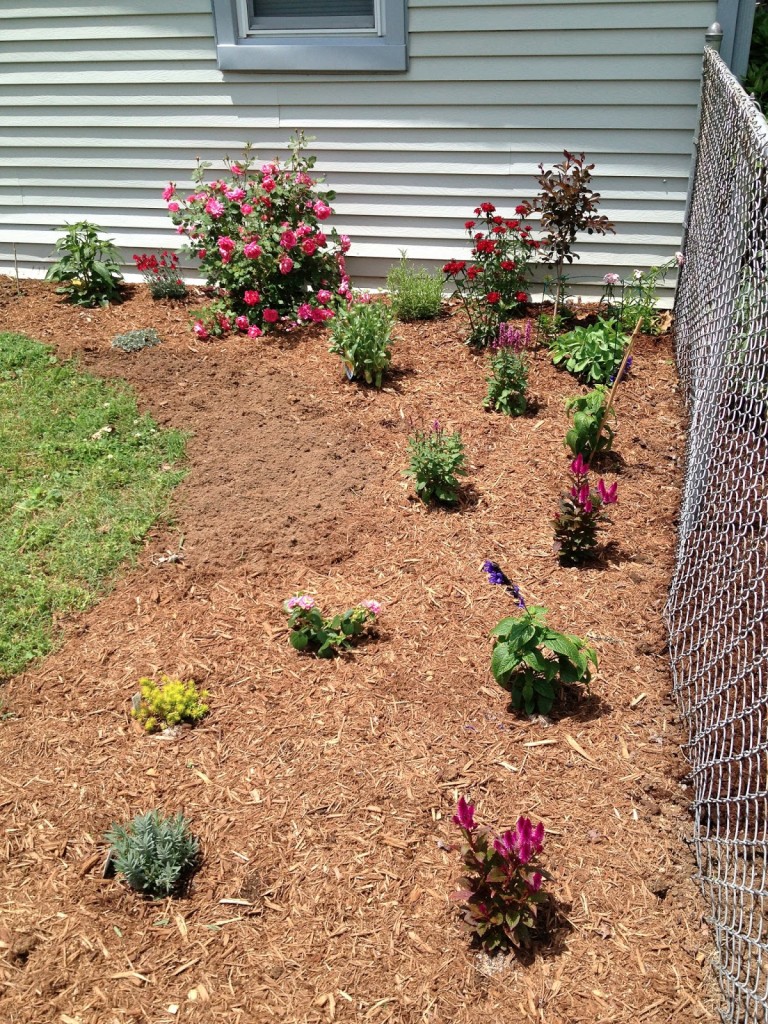 I also extended the bed on the other side of the fence. This one is simpler with two butterfly bushes, some salvia, and a Russian sage.  Not having to mow along the fence is wonderful.  I’m planning to add a really long bed on the other side of the fence, but Lord help me, these took about 5 hours to dig out since the grass was so thick and I wanted to get rid of all the roots.  The mulch has also significantly kept the weeds at bay. 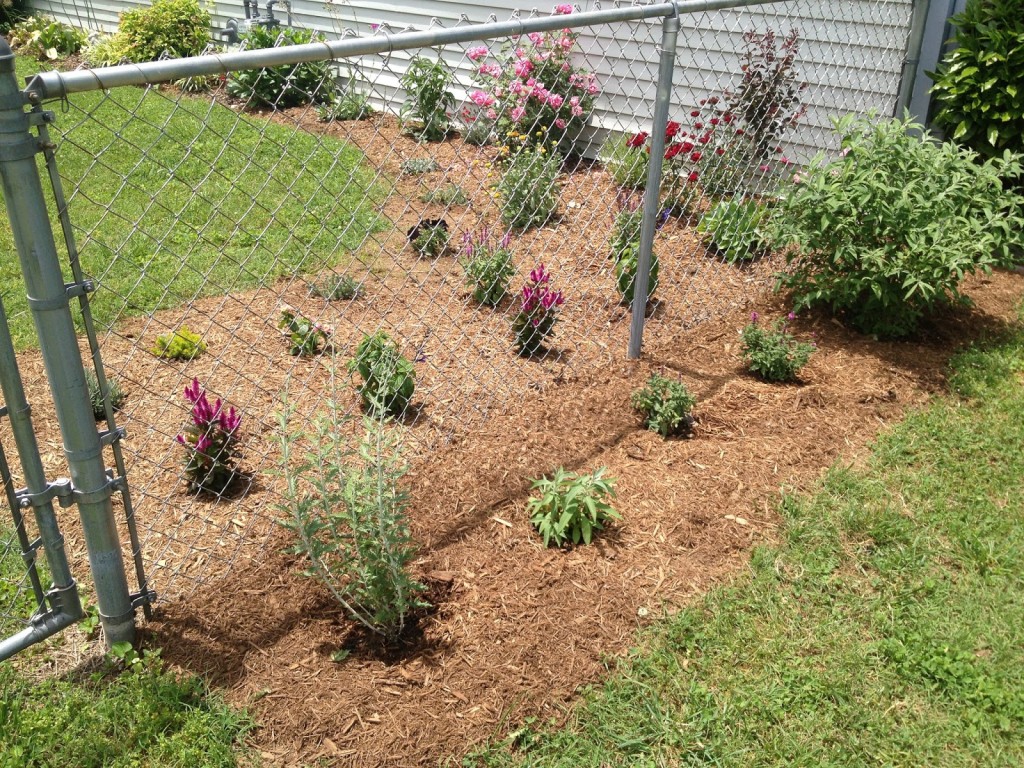 And now onto the garden I’m most excited about right now, the veggie plot!  This is what it started out as.  Rob cut some cedar stakes for me and then cut some reed fencing that was 6 feet tall into 2 foot sections.  I used some twine to secure the fencing to the posts.  This should help keep hungry creatures out, although I am about to have an all out war with some squirrels who are destroying my planters. 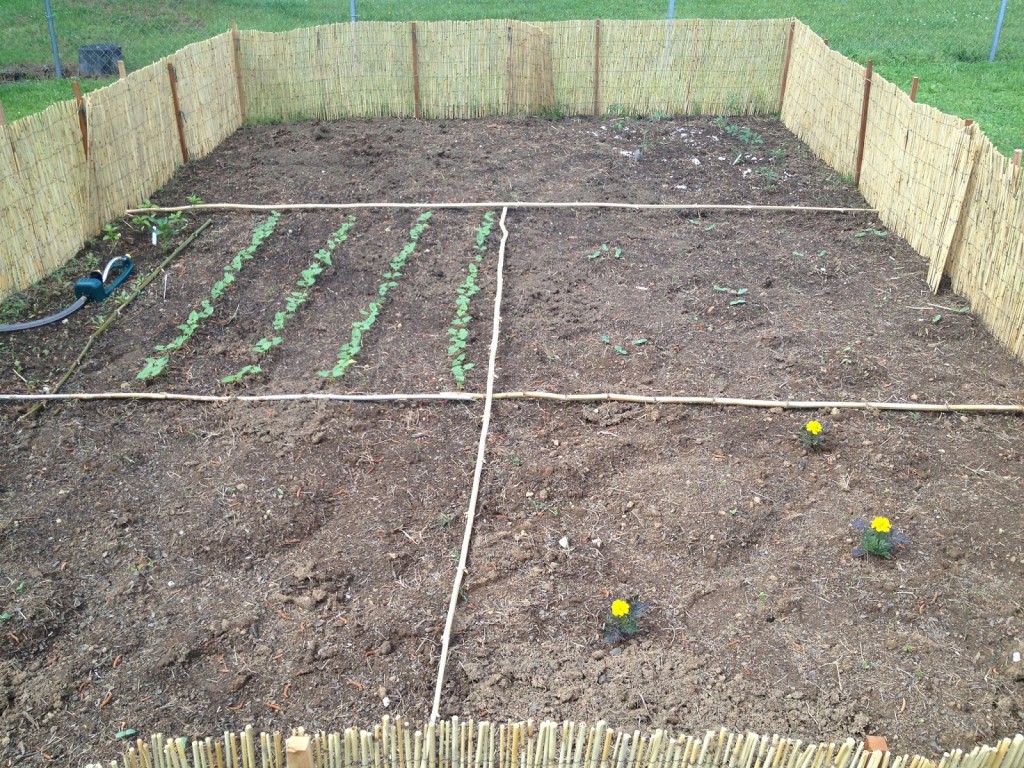 Over time…the beans, round zucchini, and cucumbers are starting to sprout nicely.  The peppers were starter plants and are still alive…always a good sign.  Tomatoes are slowly being added.  Some are seedlings, some are starter plants I got from a friend. 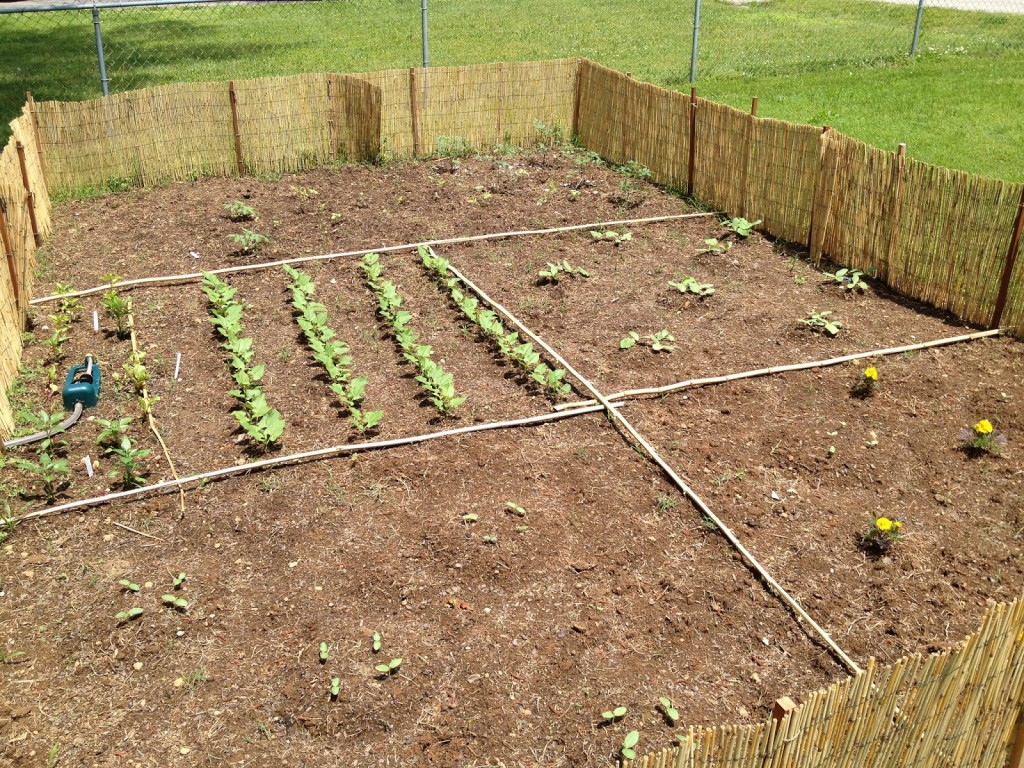 As things have been growing, the Bermuda grass that used to be the lawn has been a total nightmare.  The stuff has very deep runner roots that go below what was tilled and the only way to weed has been to dig deep with a spade and try to get the main root.  Misery!!!  I’m hoping the straw will slow the growth of the weeds.  I will not be putting straw around the tomatoes since I’ve heard that too much nitrogen from the straw breaking down is not good for them. 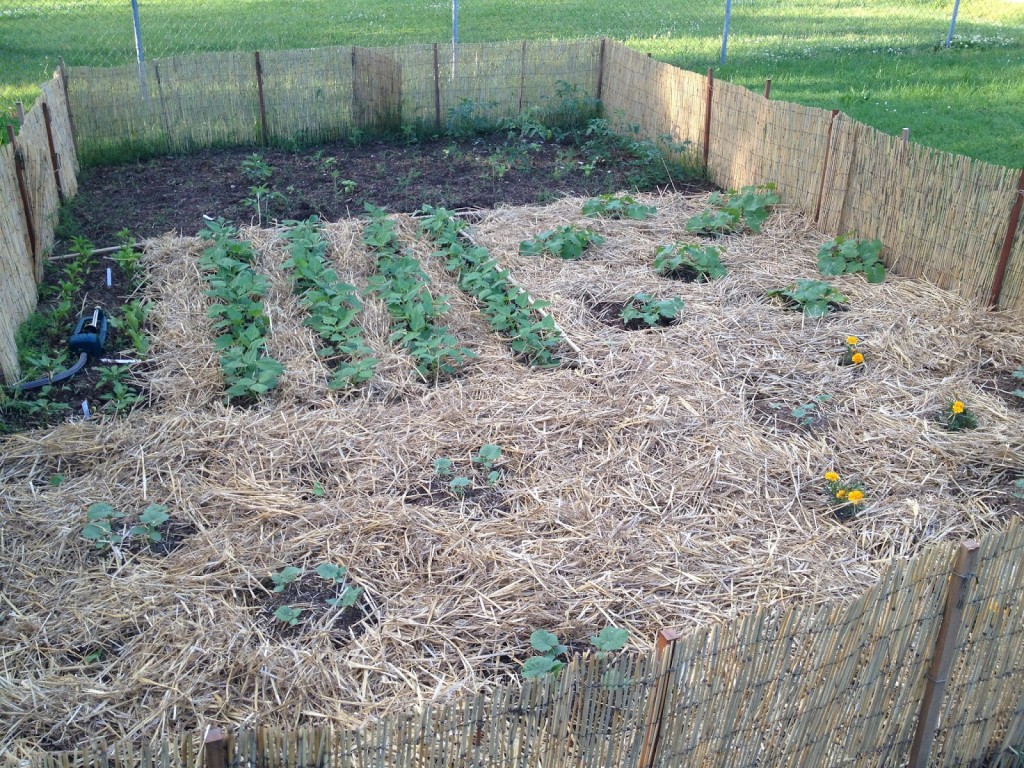 As the tomatoes grow, they need to be staked and this has been a dilemma for me…what to do?!  I’ve looked up several different staking methods and ideally, I would love to use the paneled cages (I already have 3), however, these are $10 apiece and the bamboo in my yard is free, so I decided to go with tripods for each plant.  I have 21 plants.  It’s insanity.  I spent all of Sunday morning cutting bamboo, cleaning it, measuring it, and making the tripods…hours of labor. 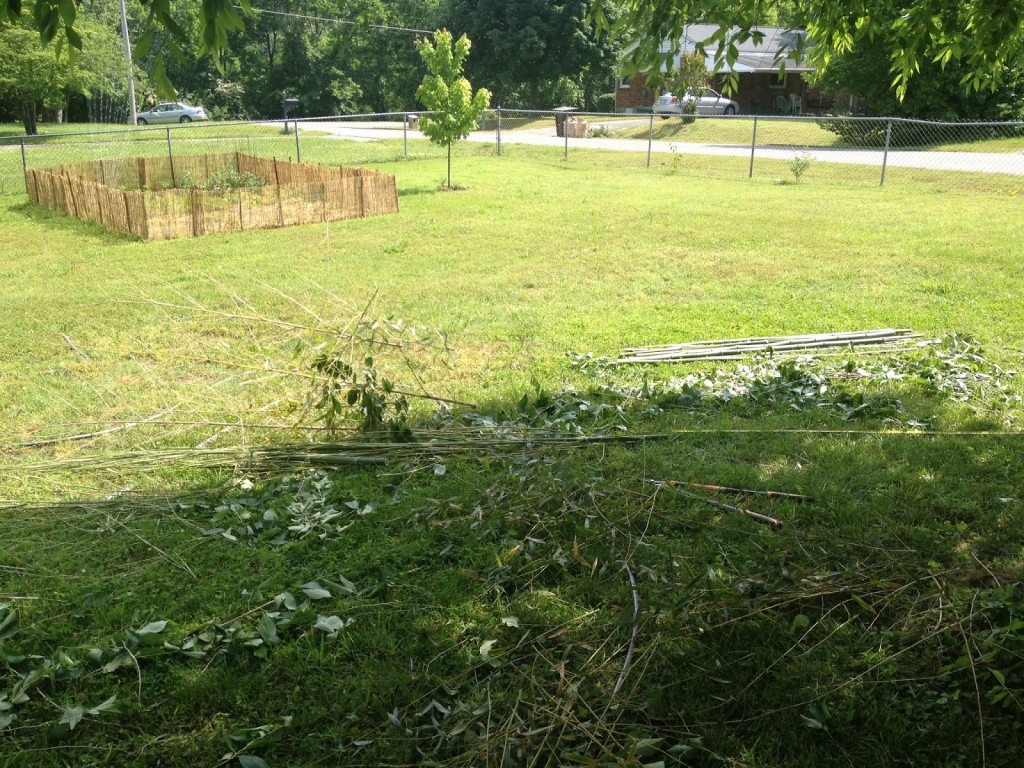 I used 6 foot pieces and tied them with twine at the top.  This was very easy and they took about a minute to assemble! 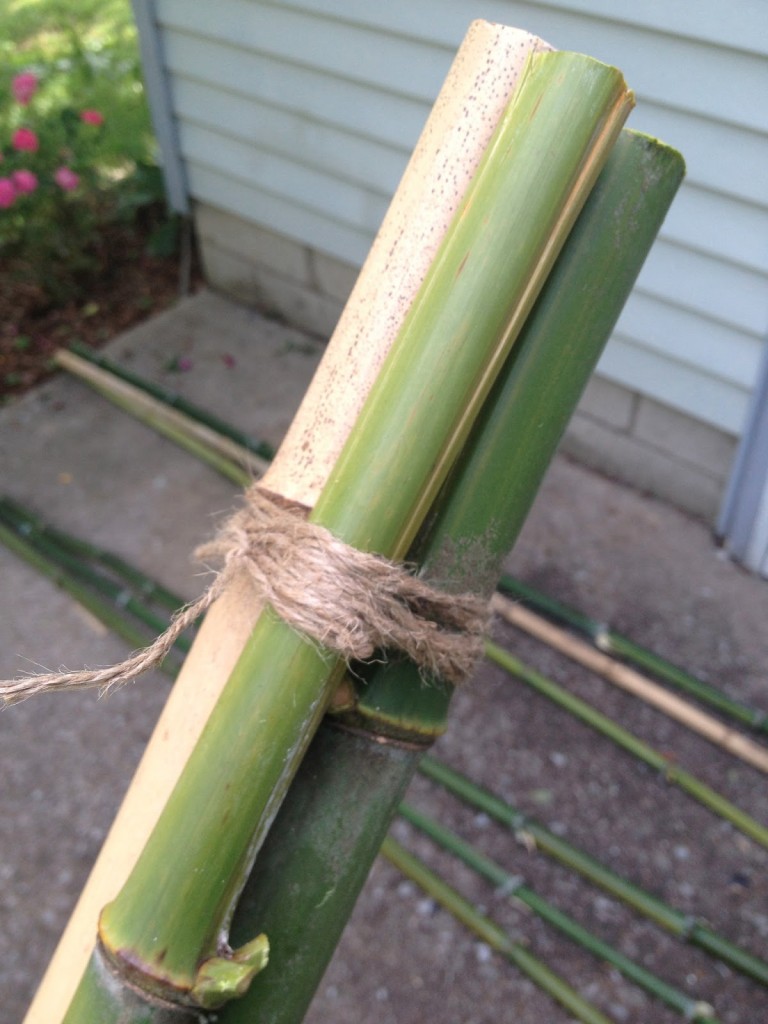 All 21 plants now have supports and I have a roll of velcro ties that will help them stay on the stakes as they grow.  The nice thing about the bamboo is that it’s natural. It will hold up for more than one year.  It was free.  It won’t get rusty.  It’s pretty sturdy.  And, if a tornado knocks it down, I can just build another one. 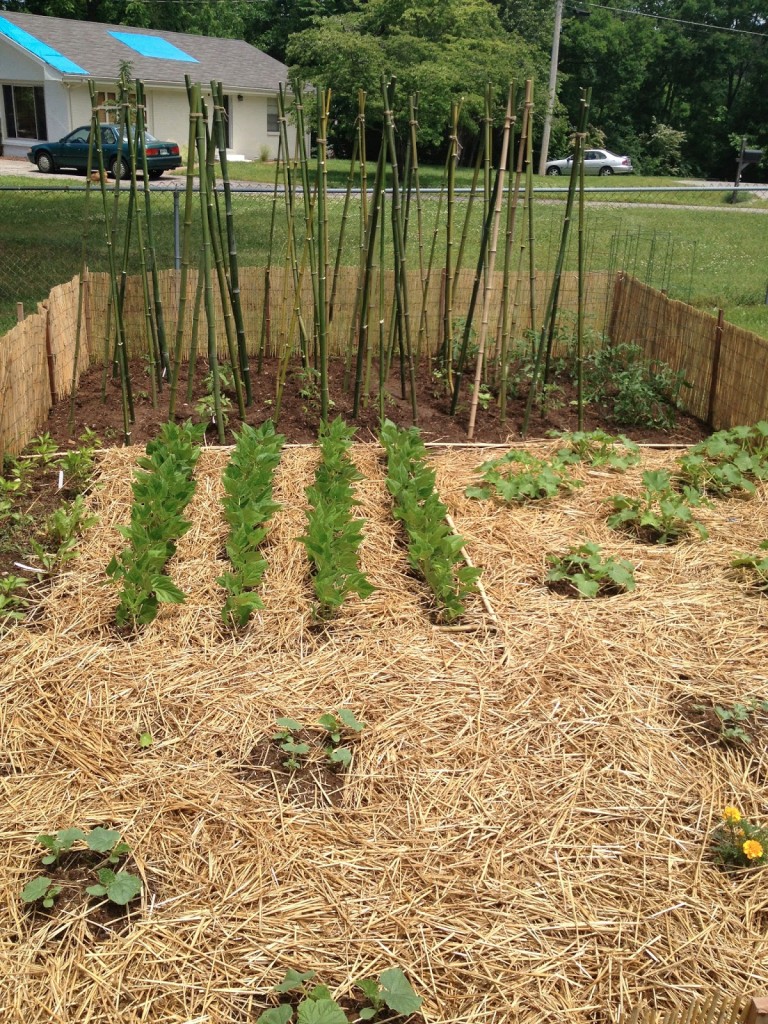 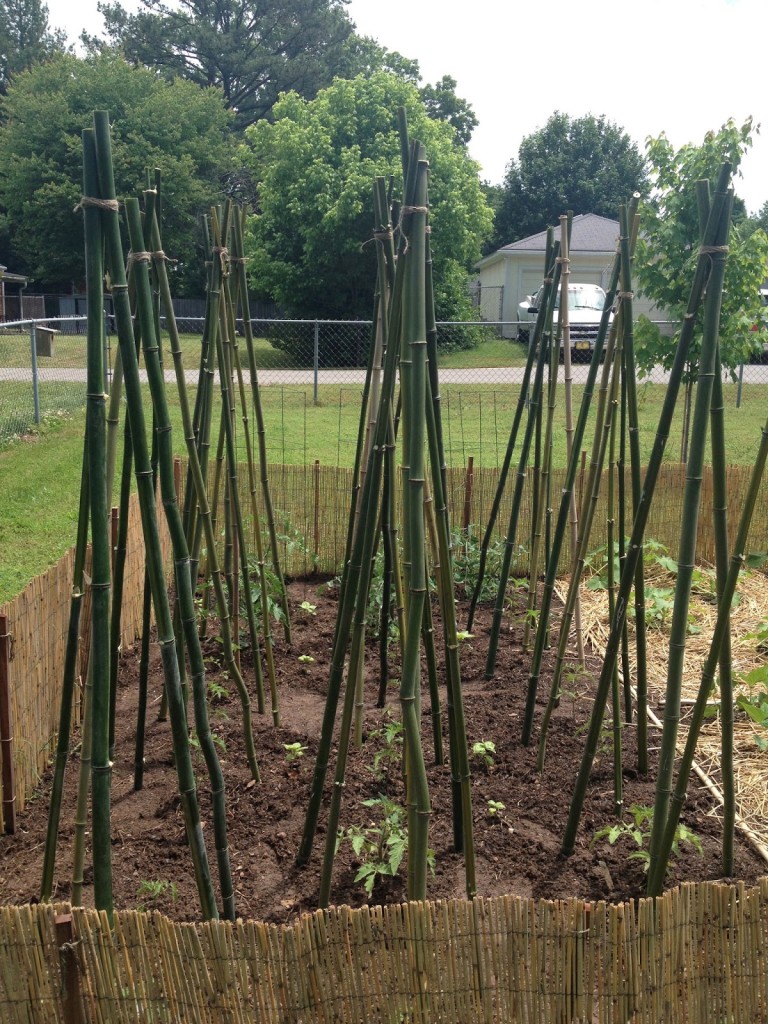 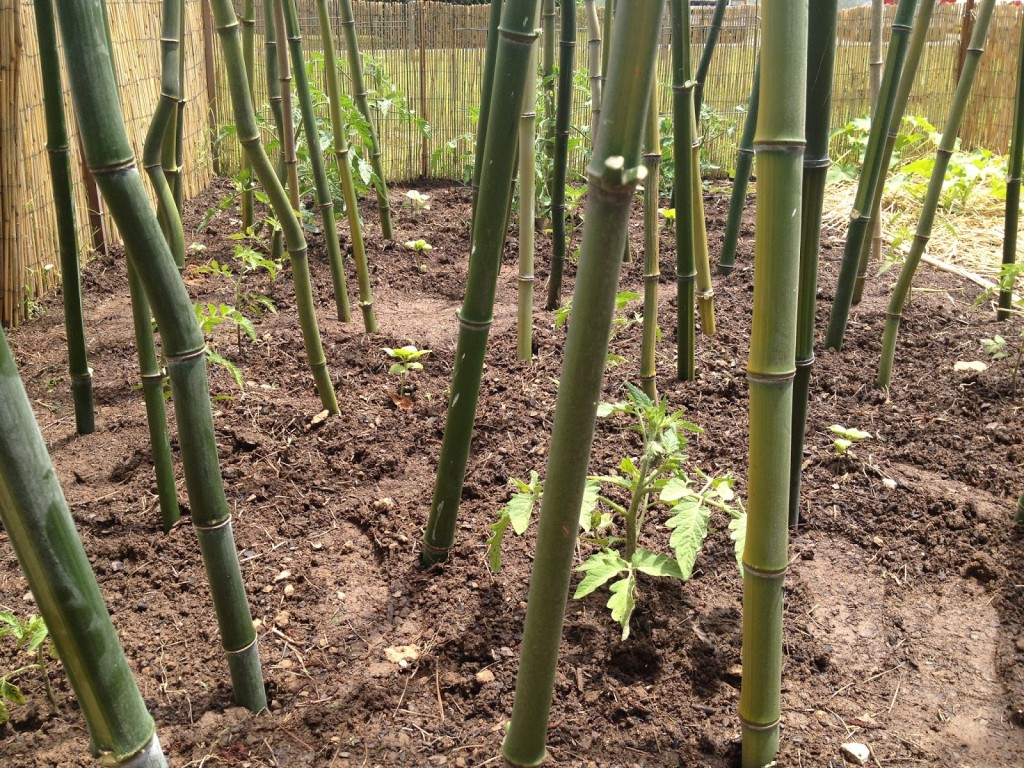 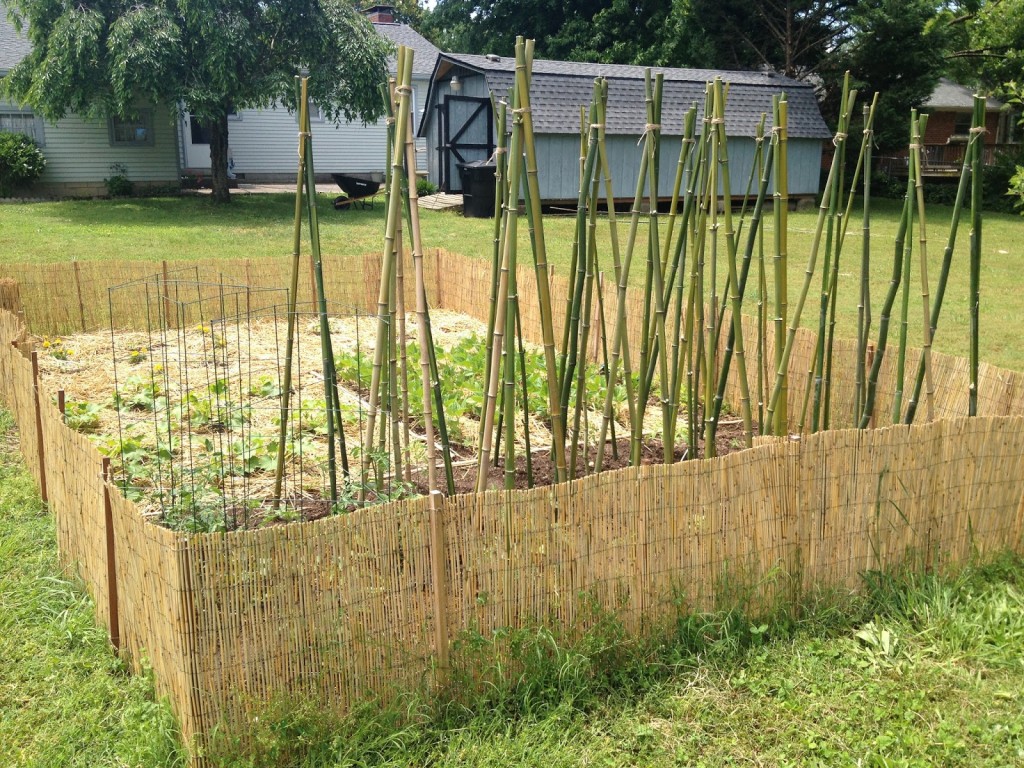 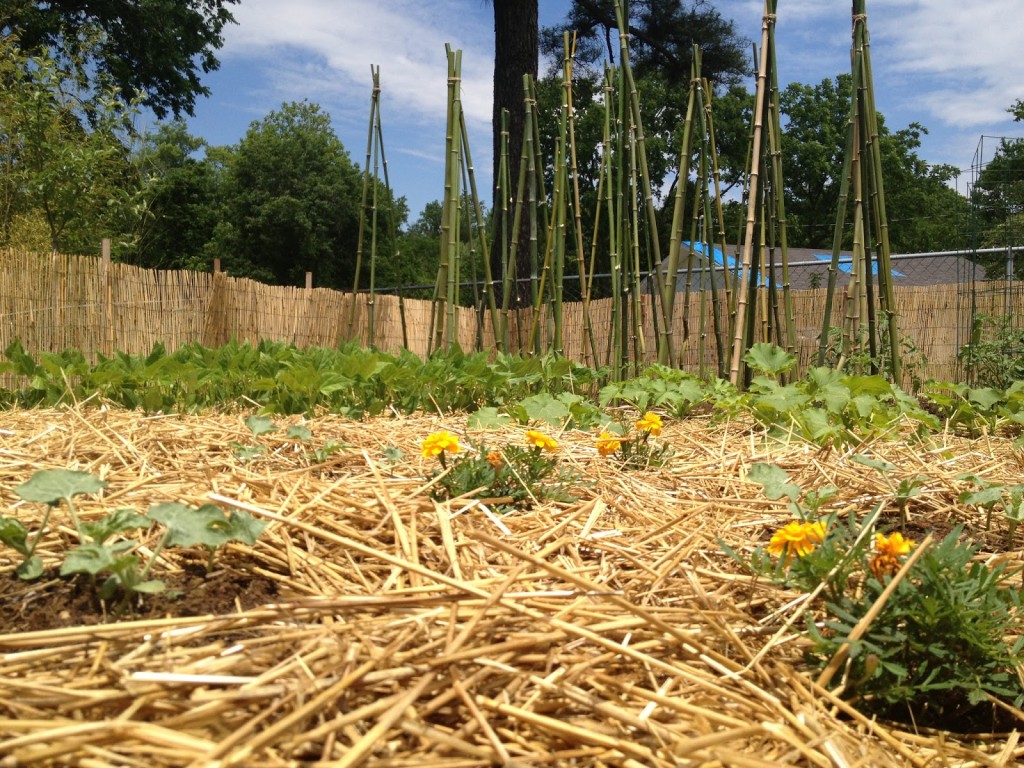 So for right now, things are coming along.  The beans are doing awesome!  The round zucchini, watermelons, and cucumbers are coming up nicely, basil is growing, and the tomatoes are establishing themselves and starting to get some blooms.  There are 4 varieties: Heirloom Cherokee Purple, San Marzano, Sun Sugar, and Heirloom Giant Belgium.  While all of this could turn out to be an epic failure, it’s the first year…so I’ll see what works and try not to cry over what doesn’t. 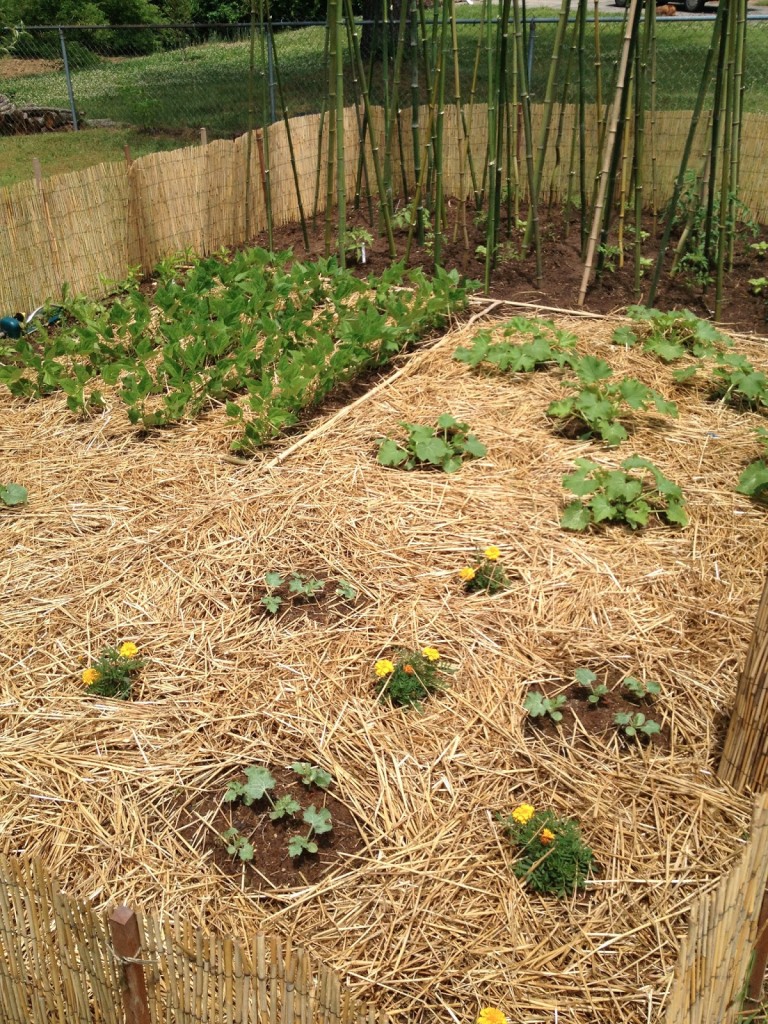