Today there was a very high chance of rain in the afternoon, so Ashley and I headed to Boulder to the Celestial Seasonings Tea Factory and took our tea-loving selves on their free tour.  It was pretty great, but we were having major RMNP withdrawal so we quickly headed back to Estes Park in the rain.  The rain ended at around 5 pm so we headed back to the park with the thought of, “Oh, we’ll just go see the Sheep Lakes meadow in the evening.” So we got the meadow and were like, what the heck, let’s just keep going.

So we kept going and came to a fork in the road.  Should we do Trail Ridge Road again?  Is that crazy?  I mean, you only live once, so why not?!  So we turned right at the fork and headed upwards once again.  We got the first overlook and the whole landscape was shot through with light.  The shadows played on the precipices, the trees took on a whole new green, and the landscape changed before our eyes as the sun began to set. 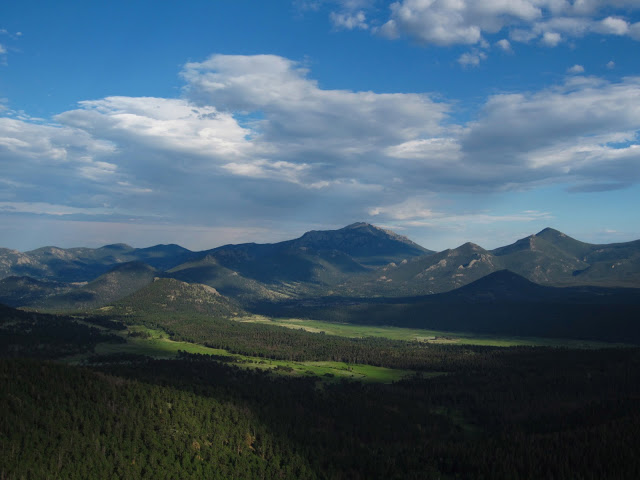 We headed up to the next overlook, Rainbow Curve.  Should we go higher?  I mean, why not go all the way to the tundra?  Do we have enough time?  Sure, why not?!  So we headed straight up the Tundra Communities Trail aka Rock Cut.  It took about 10 minutes to get there and there were hardly any other cars on the road.  We got to the lookout and there were a few other cars parked with people looking over the ledge where the pikas and marmots were sunning themselves yesterday.  We peak over the ledge and holy cow, the herd of bighorn sheep we’d seen yesterday were right there, about 20 feet away!!! 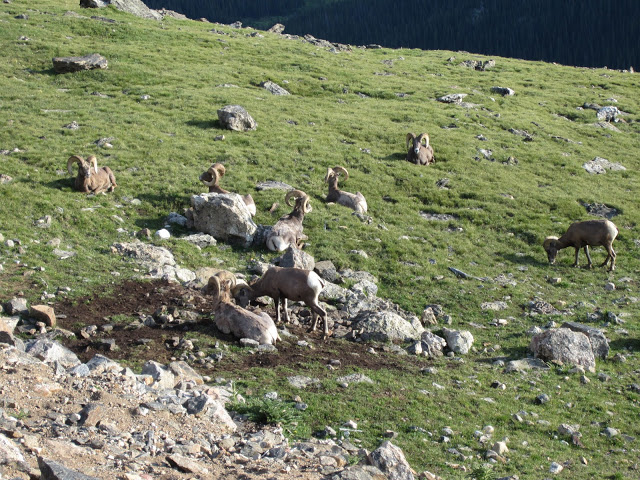 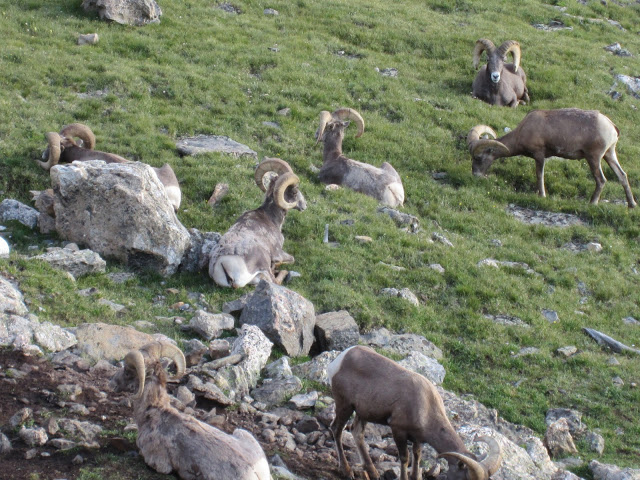 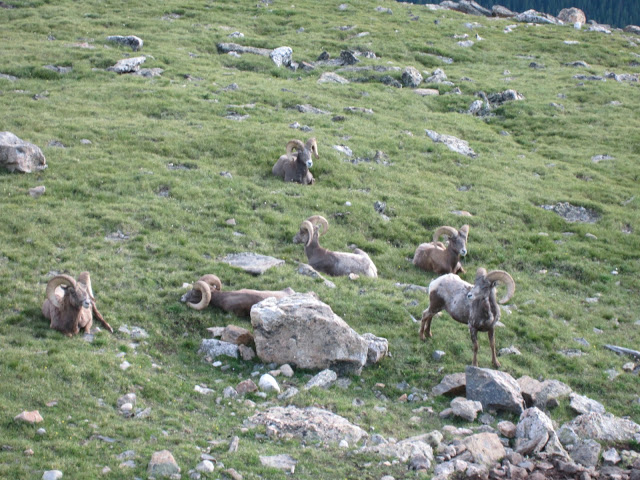 This was awesome considering the fact that we were told they aren’t seen too often.  The wind was icy, cutting right through us as we stood there, in July, freezing our butts off to look at these amazing creatures.  They were like, yeah, whatever, this is where we live, chomp chomp.  I read on the RMNP website that the sheep’s horns weigh more than all the bones in its body combined.  Bighorn indeed!  The moment was so special, the fading light, rays of sun shooting through the clouds, shadows shifting, and sheep grazing.  The marmots and pika were still hanging out, making their little high pitched squeaks. 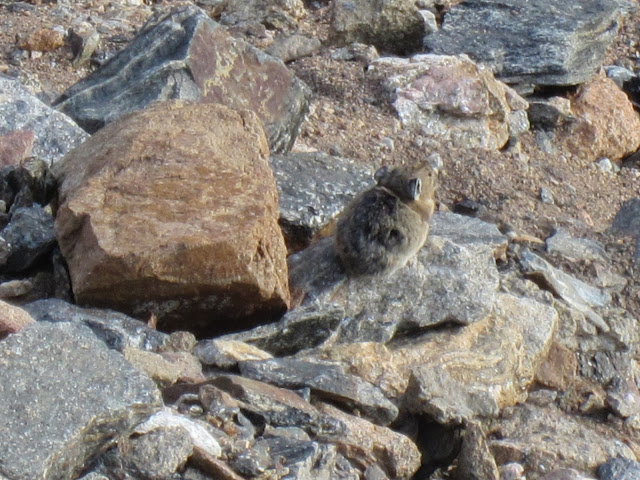 We ran our frozen bodies to the car and headed back down the mountain toward the Forest Canyon overlook.  We saw a herd of elk grazing on the steep mountainside.  How these animals do not tumble off, I will never understand.  They are massive and they skip along these sheer faces of land like it’s a walk in the park…which it is, I guess.

The Forest Canyon looked amazing.  The sunlight was shining directly on the pines in the canyon so you could actually see them well.  In the day time the canyon looks very dark and the trees are less defined when you look down at them.  We couldn’t speak for the beauty we were seeing.  If we hadn’t come, we would have missed this.  The lack of people made us feel like we had the whole mountain range to ourselves with just the quiet sounds of the wind for company. 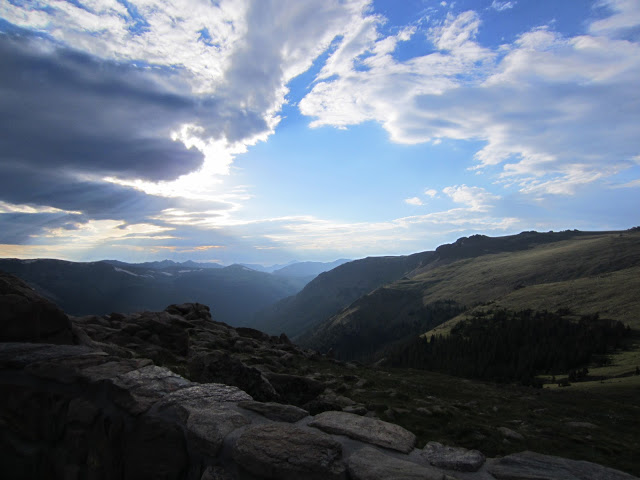 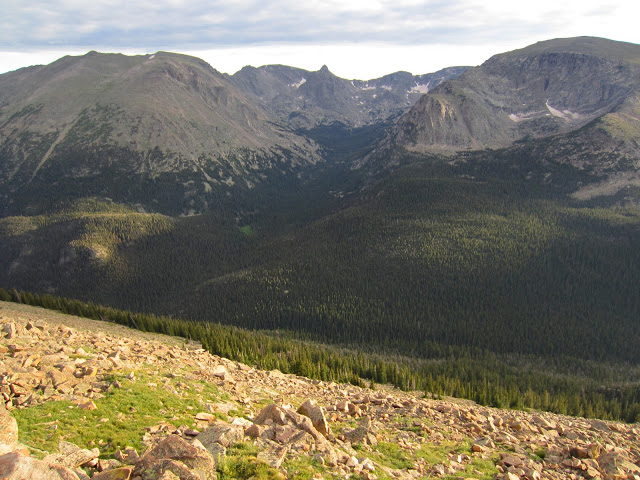 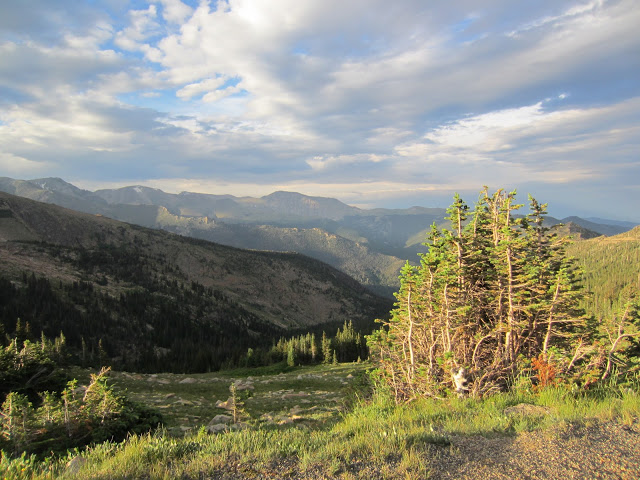 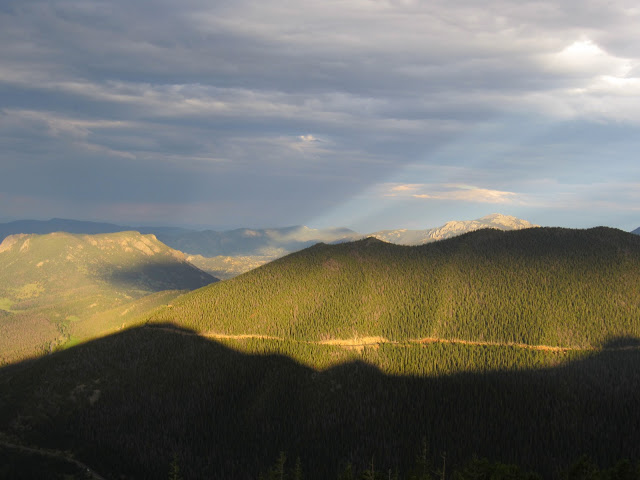 We stopped at an overlook above Horseshoe Meadow to watch the sun rays behind the peaks, then headed back down.  On our way we passed a Ptarmigan (Tar-Mih-Gan) on the side of the road, so we quickly turned around so we could take pics.  When we pulled up beside the bird, there were three adorably fat little chicks following behind her.  This was a stroke of luck because we’d met a guy yesterday on the Tundra Communities Trail who was tracking the radio signals of Ptarmigan collars.  That bird would have been so far off the radar if not for running into him. 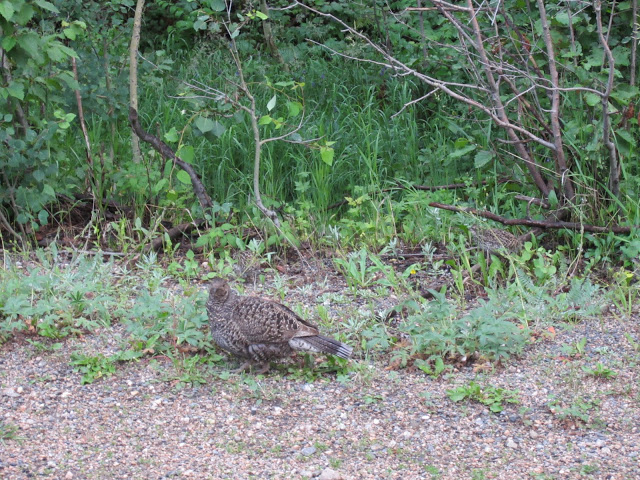 Lastly, we stopped at the meadow we’d originally come to see one last time.  All the colors were so vivid as we watched the last light fade behind the mountains.  Even the wildflowers looked brighter.  I told Ashley I want to remember this scene for the rest of my life.  My soul has been fed. 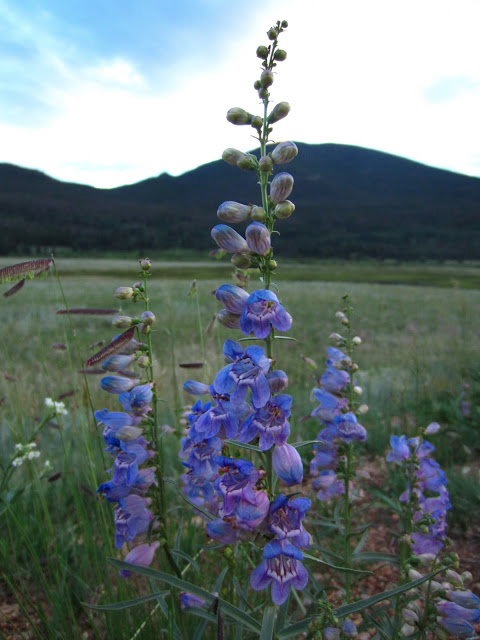 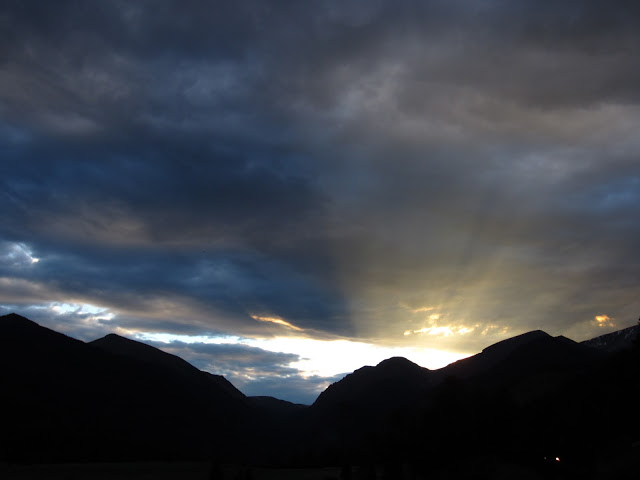