Autumn is here and the chill in the air is making me melancholy.  While fall is nature’s most resplendent display – Mother Earth’s chance to show off – it signals the coming of winter, a cold and barren time in the garden when the bulbs sleep and the animals hunker down for warmth.  I have been busy, tearing out spent tomato plants and tired annuals that have raised the white flag and dropped their petals.  Fall is crunch time.  The evenings descend quickly and the light disappears as I rush around the yard trying to finish digging flower beds and mulch new plants.  Last year at this time I was planting a maple tree and two apple trees, which signaled the beginning of what I refer to as “the year of the yard.” 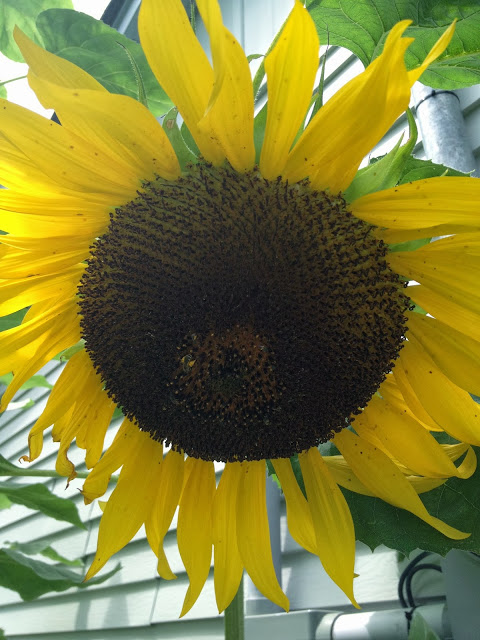 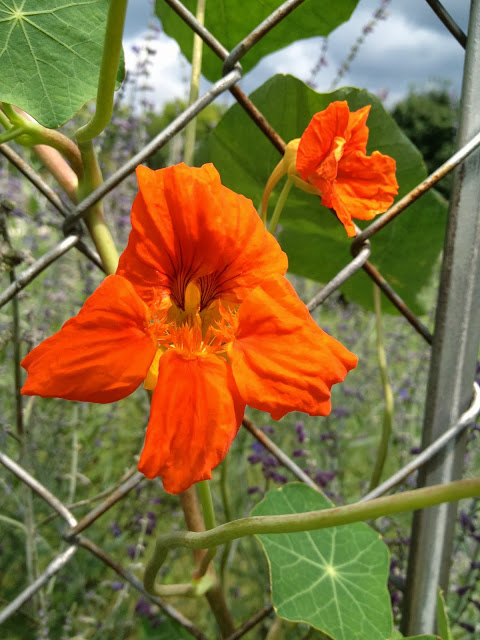 The first year in the house was an exhausting marathon of endless projects to make the place livable to the point where I wouldn’t pull my hair out or spontaneously kill someone.  The living room, guest room, and bathroom are finished.  3 rooms!!!  There are still several rooms to complete, but in the meantime, my focus turned outdoors to my glorious blank canvas of a yard.  The vegetable garden was more than I could have hoped for this year.  The yield was ridiculous with baskets of tomatoes, cucumbers, beans, and zucchini.  I still have some watermelon out there and a few forlorn sun sugar tomatoes hanging on, but for this year, the garden is preparing to rest and rejuvenate for next year’s crop. 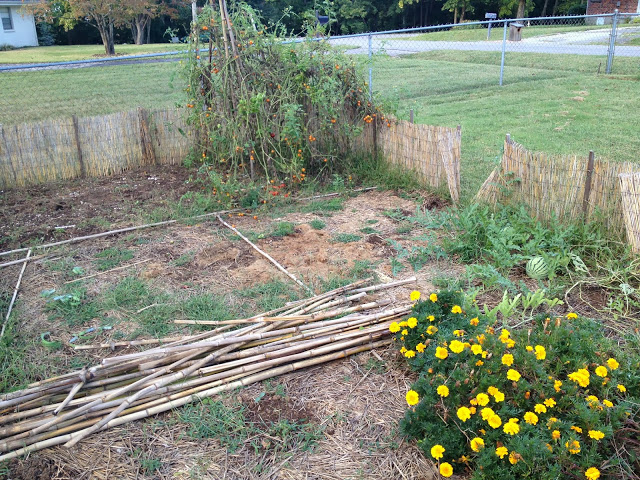 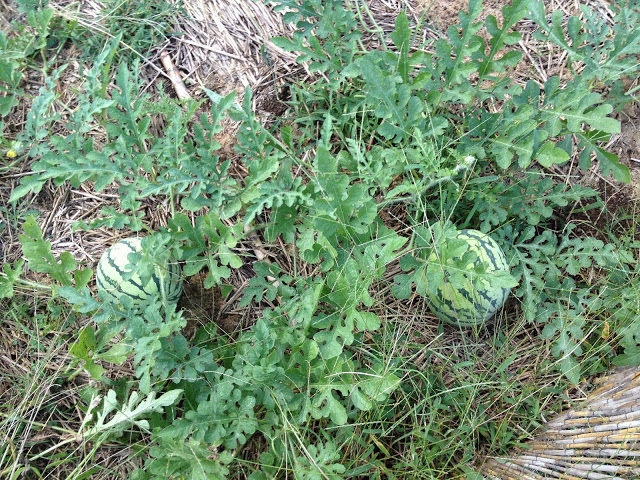 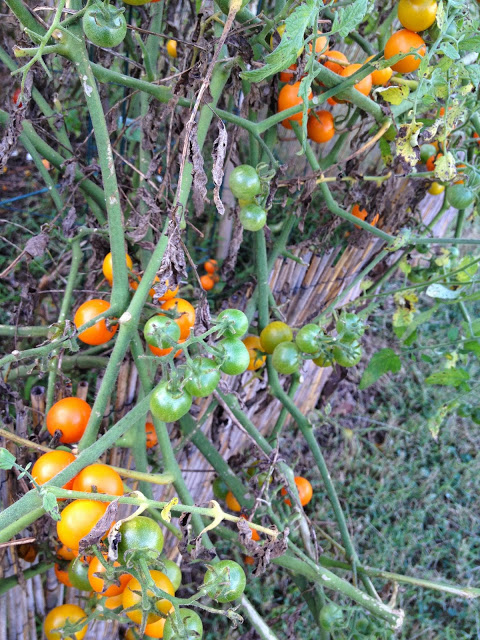 I don’t plan on growing jalapenos again since I had no idea what to do with them.  I will definitely grow the Sweet Slice cucumbers again because that variety was awesome.  The tomatoes…I am on the fence.  I will grow the Sun Sugar variety again.  Not the Cherokee Purple because the tomatoes were often misshapen and weird looking, and the plants were gangly.  The San Marzanos were good for sauce, but were a pain to manage.  The Giant Belgium were delicious and amazing, so I may try to do that one again.  All my tomato plants came down with the blight this year due to the immense amount of rain we received.  This is the first occurrence of this in TN since 2009. 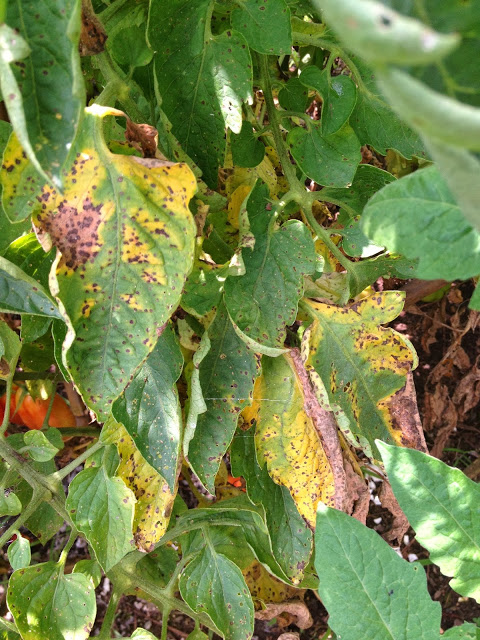 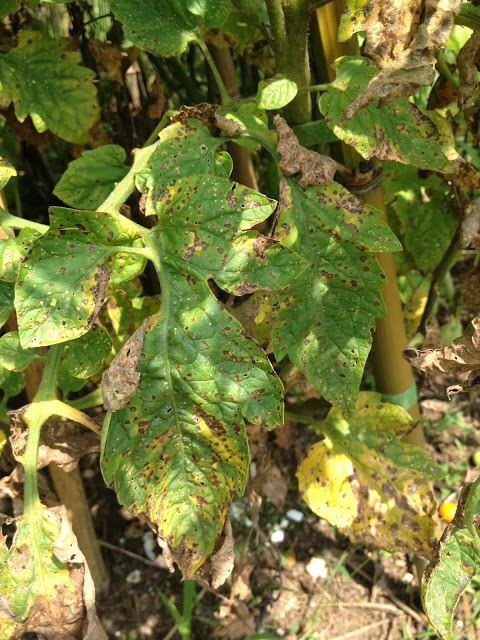 I left the ugly dying plants up and continued to get lots of tomatoes, but boy did it look like a mess in there.  Might not do string beans next season, but then again I might.  The round zucchini were fabulous until the vine borers got to them.  They are on the list for next year, along with maybe one or two plants of regular zucchini.  The watermelons were so fun, but nothing beats a seedless watermelon from the store.  I may use that section for something else next year, like a basil patch, or something fun I find in the seed section.  All in all, the veggie garden was a major success and such a joy to work in and harvest from.  Several neighbors have walked by and commented on all the hard work the yard is, but for me it’s my passion, the hard work was fun and rewarding beyond what I could have known.

My project for the last three months has been a long flower bed lining the main fence on the side of the yard.  This has been a pain to mow and I wanted to plant something pretty.  I started with a bunch of butterfly bushes in different colors, most of which were smuggled back from Mattituck on the plane in a ziploc bag.  They became huge and beautiful and the butterflies were all over these things!  Swallowtails, frittilaries, skippers, sulphurs, and hummingbird moths swarmed these bushes everyday…my heart was so terribly happy!!  Then came the clematis plants.  They were in the clearance section at Lowes (a black hole I can’t resist) and I bought 7 different colors and planted them along the posts of the fence.  Initially I didn’t want anything growing on the fence, but I broke down thinking maybe they would class it up a little, but let’s be honest, there is no plant in this world that can bring class to a chain link fence. 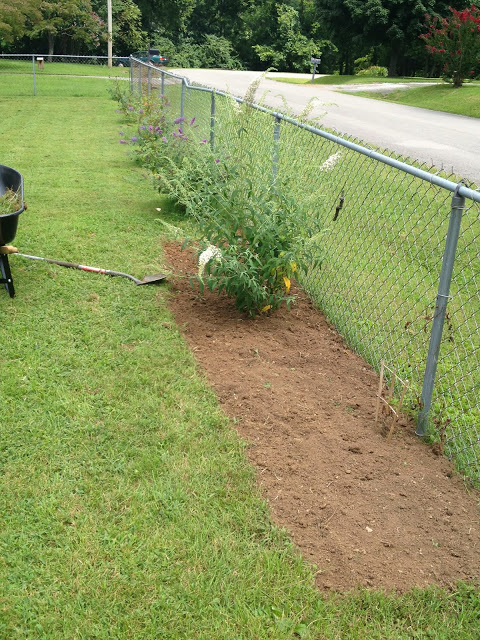 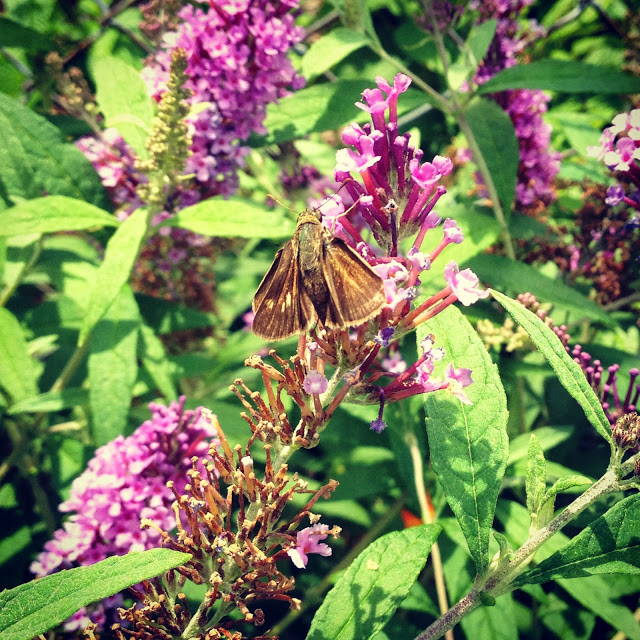 And lastly, dad’s daylilies to fill in the spaces between the butterfly bushes.  Daylilies are drought tolerant and keep their foliage up through the fall.  They are also incredibly gorgeous when they bloom in large groups.  There are about fifty plants that line the fence now, all from dad’s garden, all his original varieties that he’s hybridized.  No one else in the world has these plants and it is so special to me to have a piece of home in my flower garden.  Digging all of the grass out was a miserable process, but planting the daylilies made it all worth it.  I can’t wait to see the show they put on next spring! 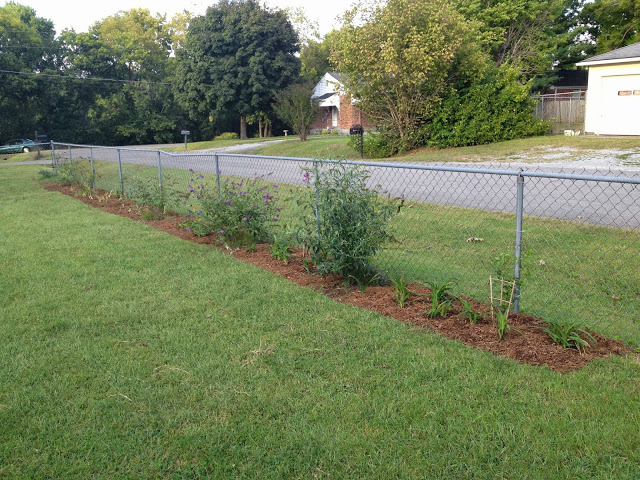 I have one flowerbed left that I want to finish before fall ends.  I’d like to get some railroad ties and put them around the apple trees to create a rectangular bed.  The soil where they are planted is very hard and some of the roots of the trees are showing, so I want to kill the grass, add some topsoil, and put some low growing, sun-loving perennials between the trees.

One of the most exciting little projects was the planting of my fig tree!  A friend gave me these twigs in the spring and they just took off and started to become a little tree.  As the tree became root bound in its pot, dad helped dig out a useless wad of lilac sticks that refused to bloom.  The roots were massively entangled and there was just no hope for the plant anymore.  The leaves mildewed in the humidity and it looked shoddy at best.  The fig is now happily sprouting new leaves where the lilac dwindled and the old lyriope from the front walk found a home around the base of the little fruit tree. 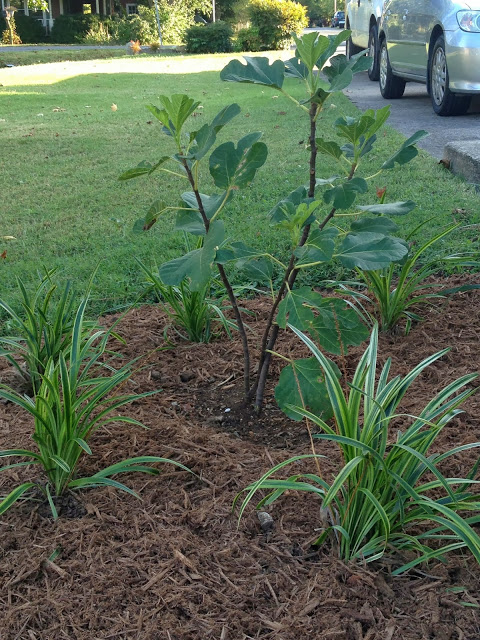 Not bad.  Most of the hardest, more labor intensive work is past me, so next year will be mostly maintenance and moving plants around to get them in exactly the right spot.  I wish I had tons of cash to drop at a fancy nursery so I could glam the place up a bit, but hopefully as roots start to establish themselves, the gardens will look less like a patchwork quilt and more like a designed and intentional  landscape.

Autumn, I love you, but I will miss summer’s heat and vibrant growth.  Now comes the time of soups, stews, and pumpkin pies!!!

Previous Post: « Bruno Mars & Judy Collins: A Case Of Musical Era Whiplash
Next Post: Great Smoky Mountains National Park: Getting Out Of Tackytown And Into The Woods »