So, we got married! I will talk more about this later when I have real pictures to show, but let me sum it up by saying that the week before was perfect, the weather was as incredible as anyone on Long Island could ever hope for, being with our friends was so fun and amazing, having so many loved ones join us in celebrating nearly made my heart explode, and I ended up with the best guy ever.  It rained on the day we took people to the airport, like the atmosphere was exhausted and petering out from putting forth all that effort to make everything beautiful for us.

Two days after the wedding, we left for our honeymoon in St. Lucia.  The blogs I’ll post over the next couple of days are from some emails I sent out, so forgive the improper tense.  Also, the spacing is totally screwed up and I can’t change the formatting.  Lord help anyone who reads this.  Hope you enjoy the pictures! 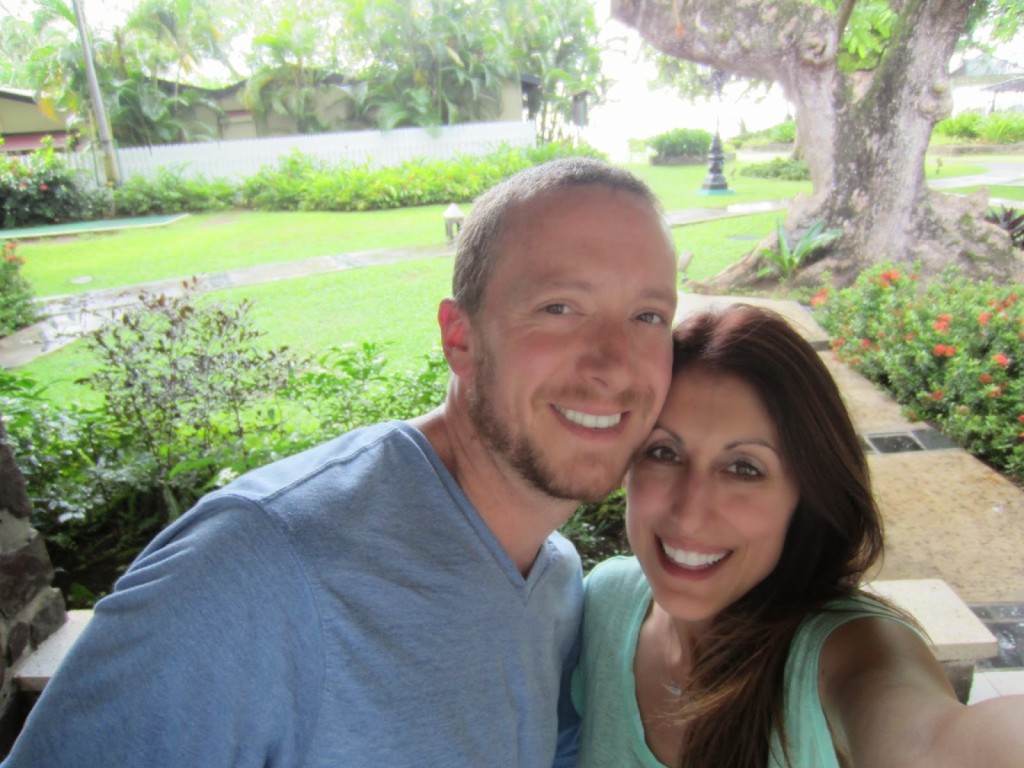 On the plane ride we were next to each other, but separated by an aisle and surrounded by couples in love. GAG!!! It was gross, they were everywhere.  Blonde chicks with rhinestones on their butts and boobs that said “bride” or “mrs.” I realize we are one of these couples, but I hope we don’t make people this nauseous.  The couple sitting next to me seemed normal and not 22 years old. They kindly gave us two dramamine pills before we got off the plane, and thank God they did because we would have been tossing our cookies on the van ride to the hotel. Rob and I had a hand on each others knee and would squeeze really hard when we got scared…needless to say, we practically cut off our circulation. The ride was kind of terrifying. We were on the opposite side of the road, the curves were insane, we almost plunged to our death like 8 times, and I just had to keep my eyes on the banana trees to avoid freaking out. We did see some giant ferns though! 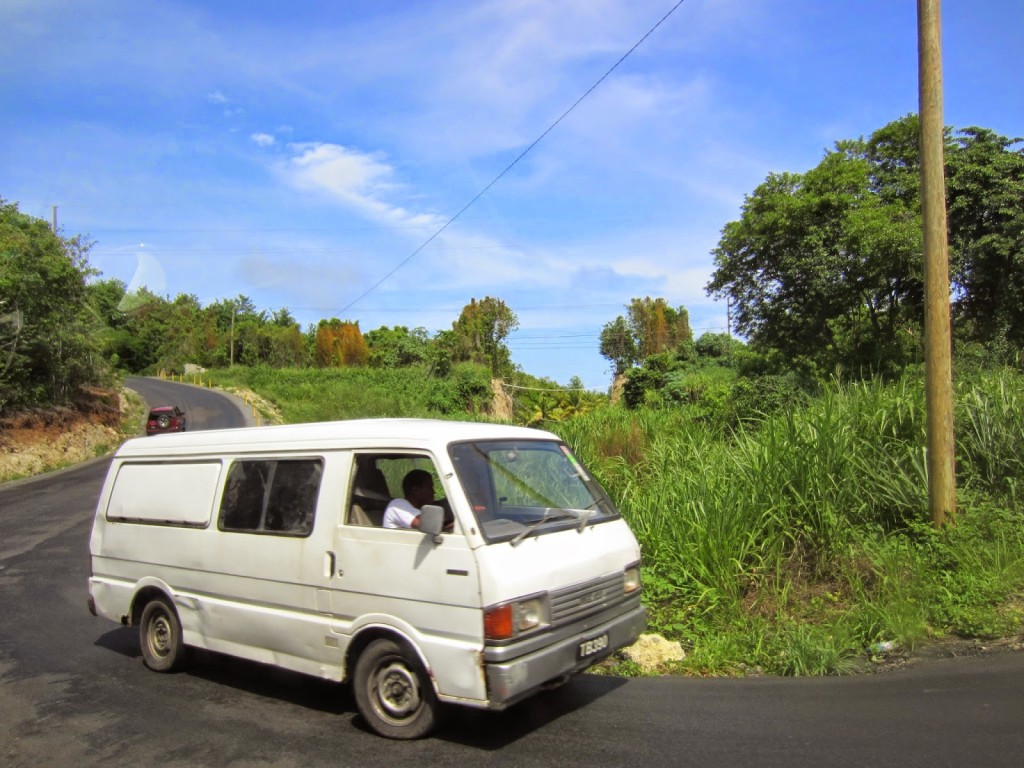 The island is very poor. Like, heart-wrenchingly impoverished in some areas. Many of the homes here are built with plywood, have no windows, are covered in sheets of rusting metal, or just look very dilapidated. We are staying in the capital city of Castries…a “city” that looks rather rundown upon first glance. We will not be exploring the way I thought we would. They do have a Best Buy and a Home Depot though…the Home Depot sign is painted on metal, not orange, and has sticks of lumber piled around it. We also passed a woodworking/furniture shop, covered with rusted metal and plywood, but inside we got a peek of some lovely pieces being built.

Our resort, Sandals Halcyon Beach, is on the outside of the city and we felt this very odd paradox when we
arrived in this luxurious place that exists in the middle of poverty, shutting it out with pretty landscaping and helping us to forget it exists by plying us with alcohol and hospitality. We talked about it that evening and said how weird it feels to be on this compound, knowing what exists just down the road.  A friend who has traveled all around the world gave a really good perspective on it.  She said that much of the world is like this and that Americans bring commerce and money into the economy.  At some point you tune it out knowing that your dollars are helping a little bit.  Sandals also has a foundation that gives back to the island, which is really encouraging to see. 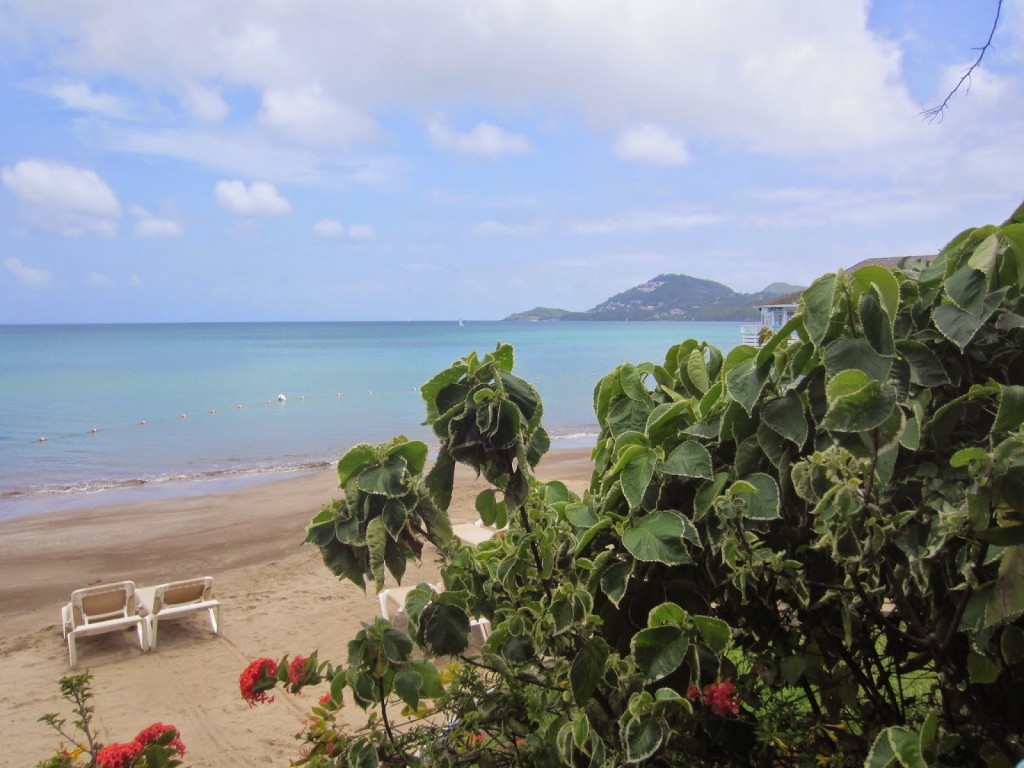 Our room is gorgeous with a vaulted ceiling and a view of the ocean. I think they upgraded us actually. 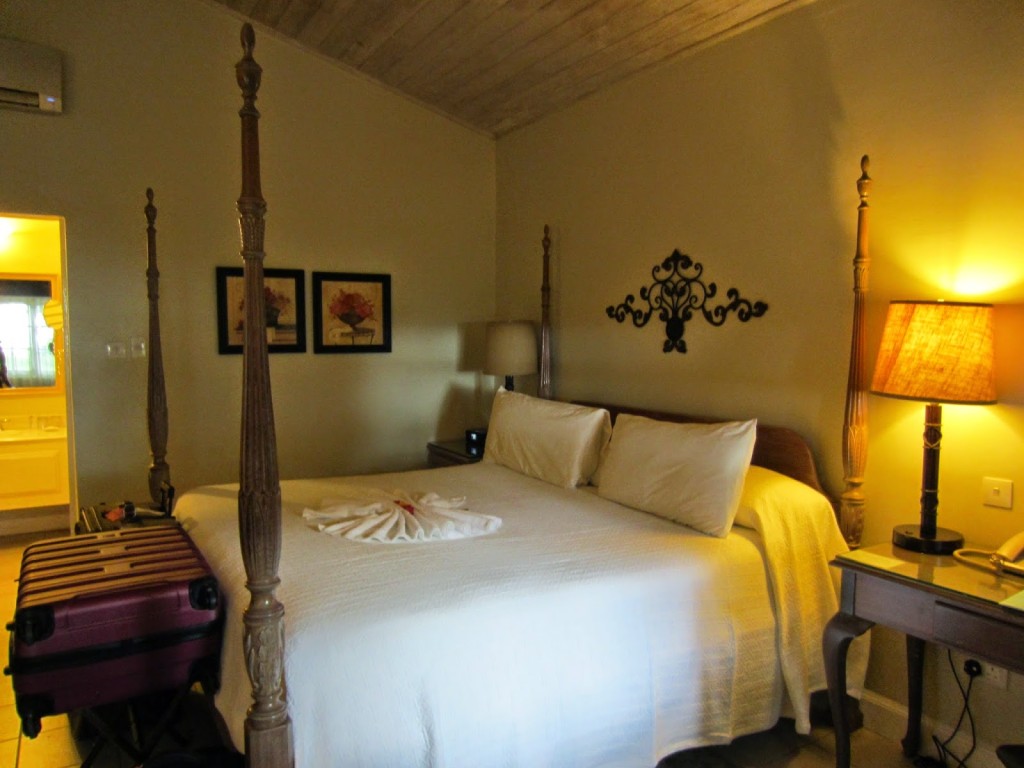 Somehow, we ended up in a resort that has cats everywhere! They are adorable. They greet you at the restaurants, hang out on our porch, and frolic on the beach. I’m sure they are considered a pest here, but are so cute and pathetic, I want to take all of them home. 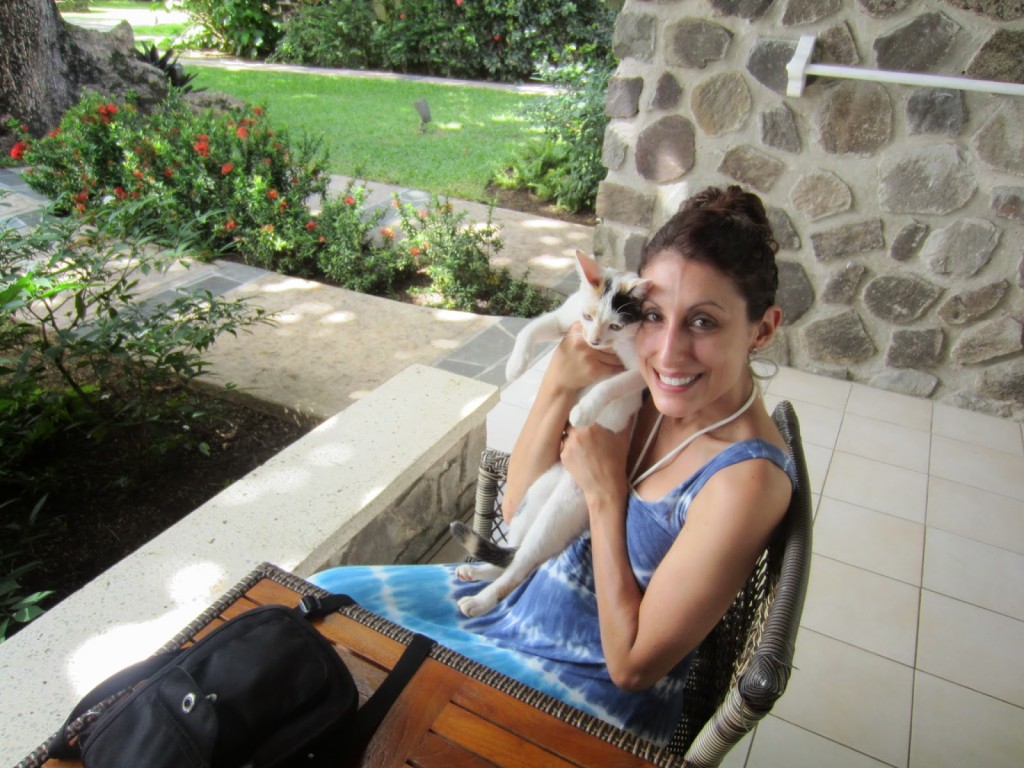 We got a tour of the resort and saw the most incredible caterpillars! I freaked out, you know I love a good
caterpillar. They are the size of a man’s finger and are all over some of the flowering trees here. I looked them up and they are Frangipani Hawkmoths. So cool, I’m geeking out. Rob keeps telling me to stop
taking pictures of the flowers, but they are all so gorgeous I just can’t help myself. 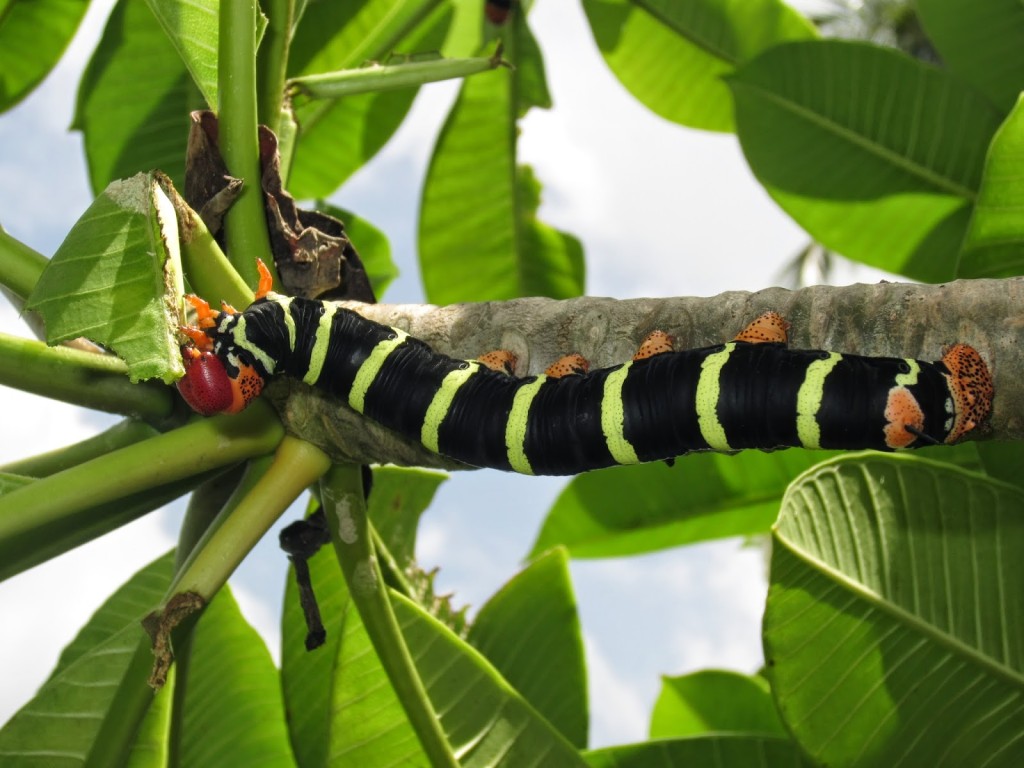 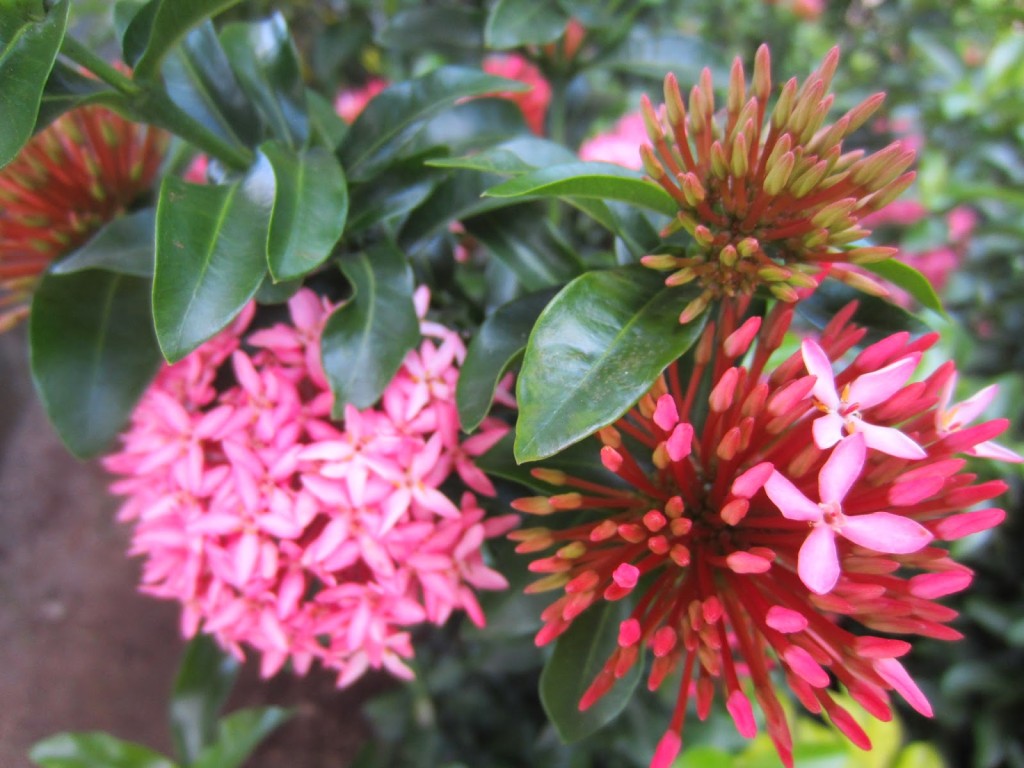 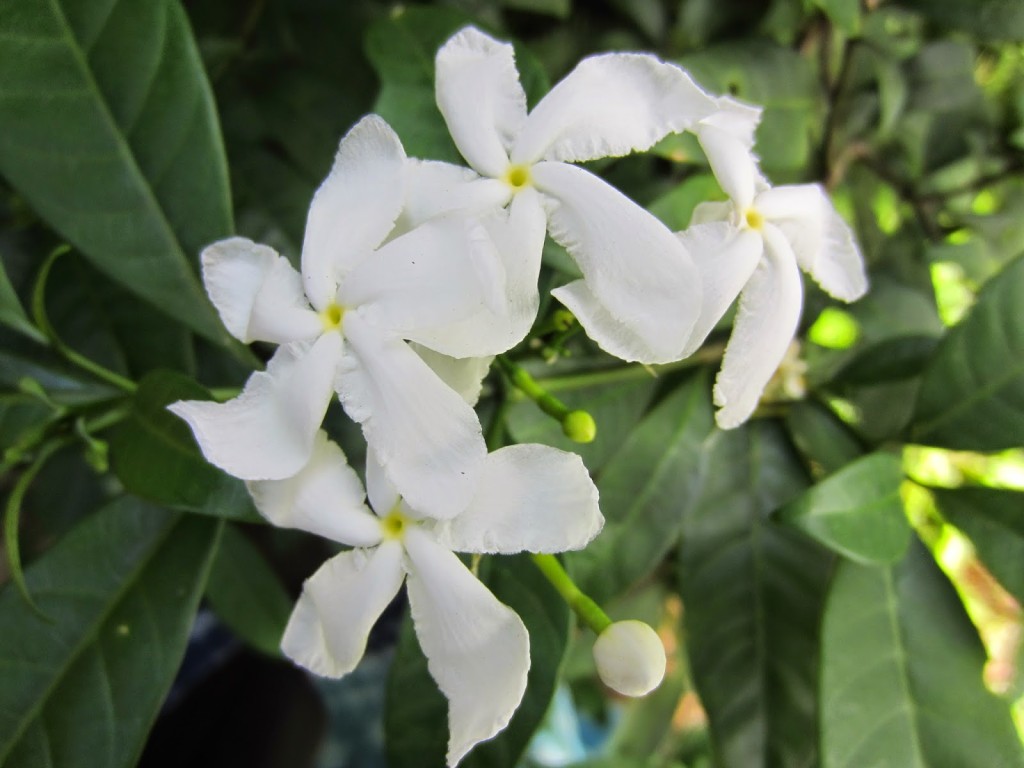 We went swimming today. The water is warm, but you know me, I’m always freezing. We made a reservation to go snorkeling at 8 am tomorrow. 8 AM!!!!! We are stupid. Apparently, they only go snorkeling later on Mondays and Saturdays. So tomorrow we will freeze and probably drown, but maybe we’ll see a cool fish or two. We also went paddle boarding today, which was so fun…it’s like being
Jesus for a minute. Forget walking on water, he should have just used a paddle board! Rob ended up with one that had a broken fin, so he gradually drifted farther out to sea while I was like “doo doo
doo, this is so awesome…” He made it back in to shore, but was generally annoyed by the experience. 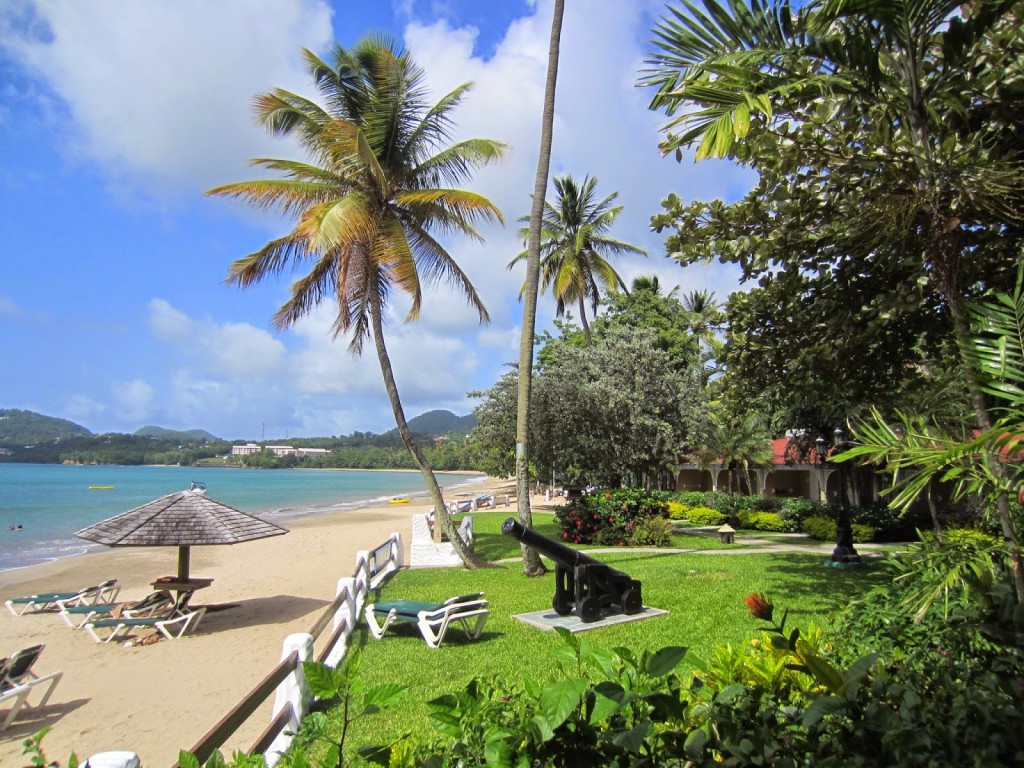 Later on in the day we took a kayak out to the island you can see below in the pictures. The island has a couple of TOTALLY CREEPY buildings on it that some nuns used to live in. Like real life Ghost Adventures stuff here, folks. 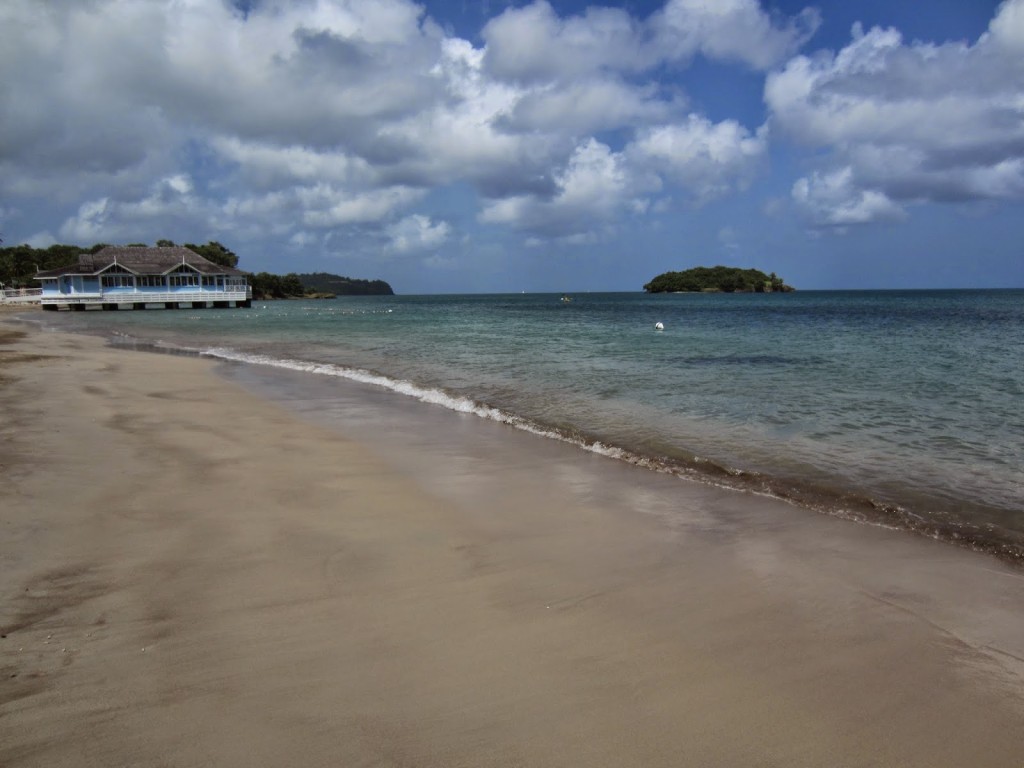 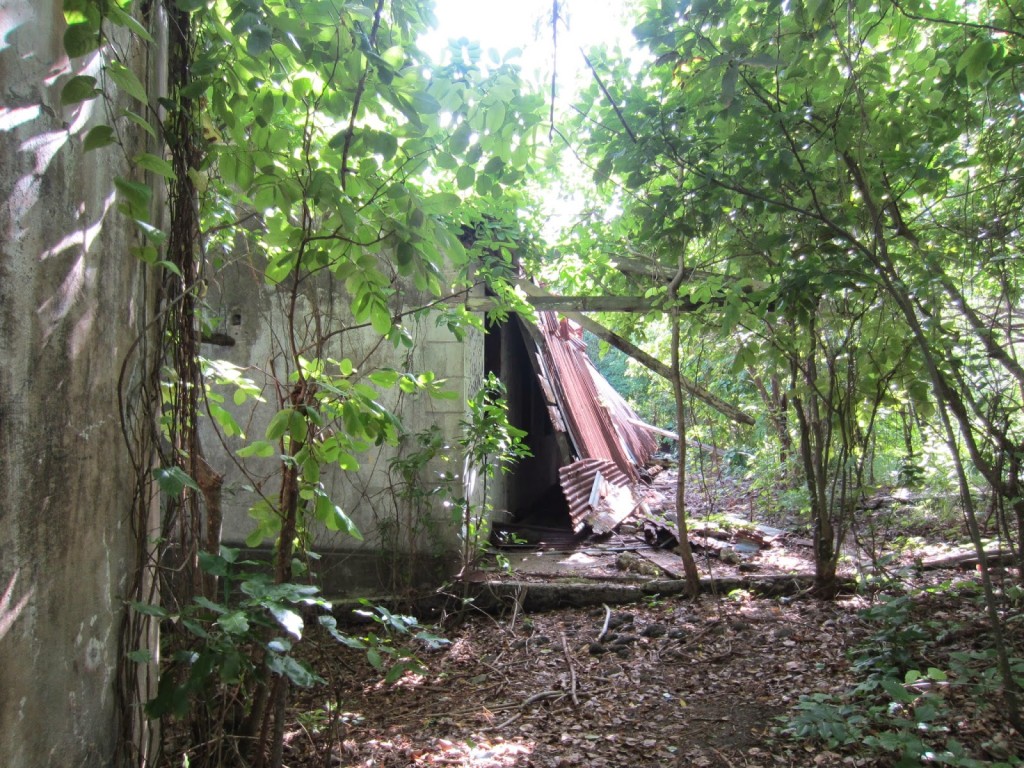 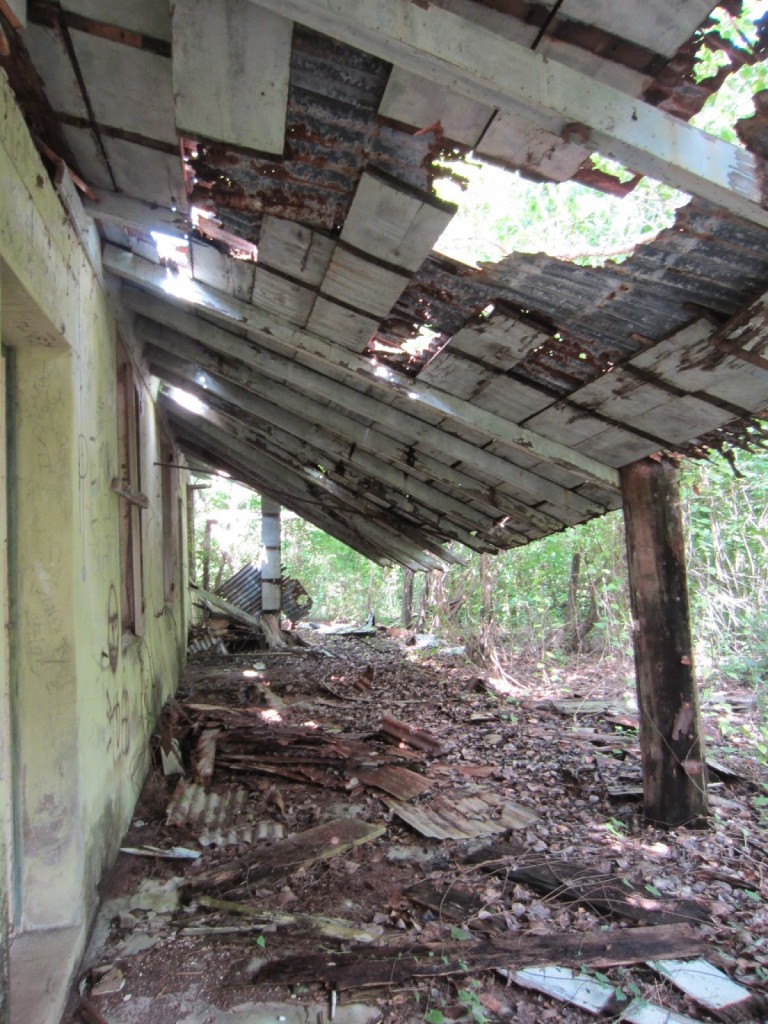 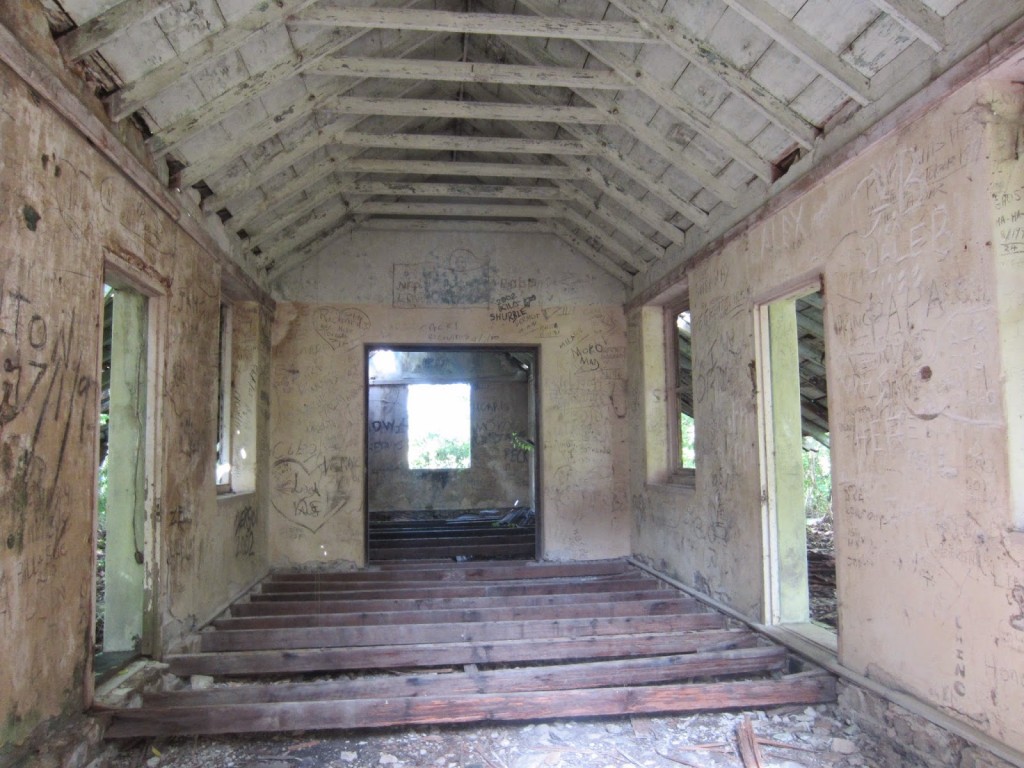 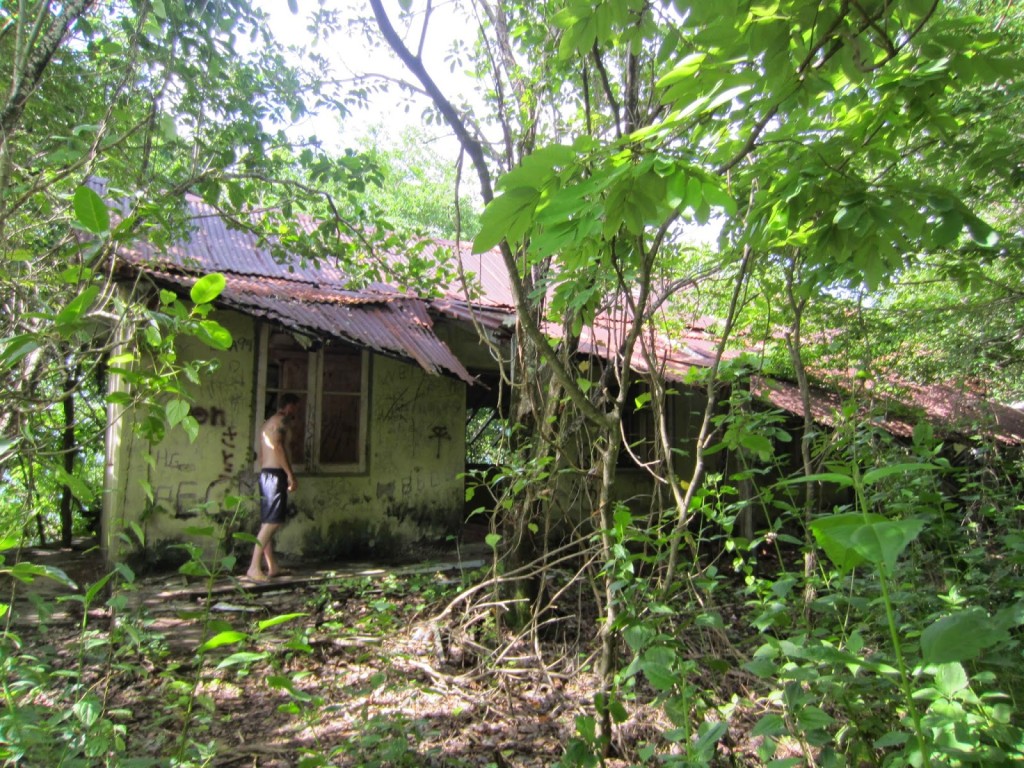 There are large land hermit crabs walking all over the woods!! They are adorable! It was so cool to see them in their natural habitat after seeing them for sale in mall kiosks. I had one when I was in college and I kind of feel bad that he ended up walking around on my dorm room floor instead of living the life in a tropical forest with haunted buildings on an abandoned island. Our arms almost fell off on the way back. We were against the wind and the current, but we worked dinner off before we ate. 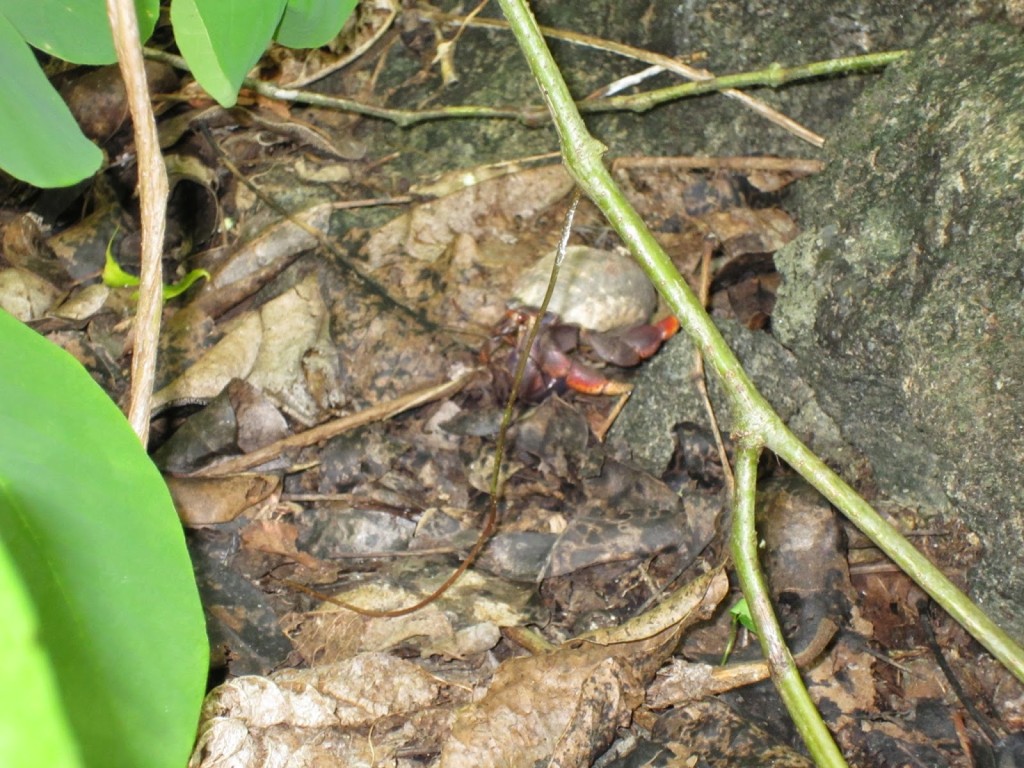 We got dressed up and had dinner at the dockside restaurant…that blue one in the water that you can see below. It was really nice and the food wasn’t bad! Rob’s been eating lots of fish and I’m trying not to eat scary meat. So far my favorite thing I’ve eaten here has been the banana ice cream with hot fudge. 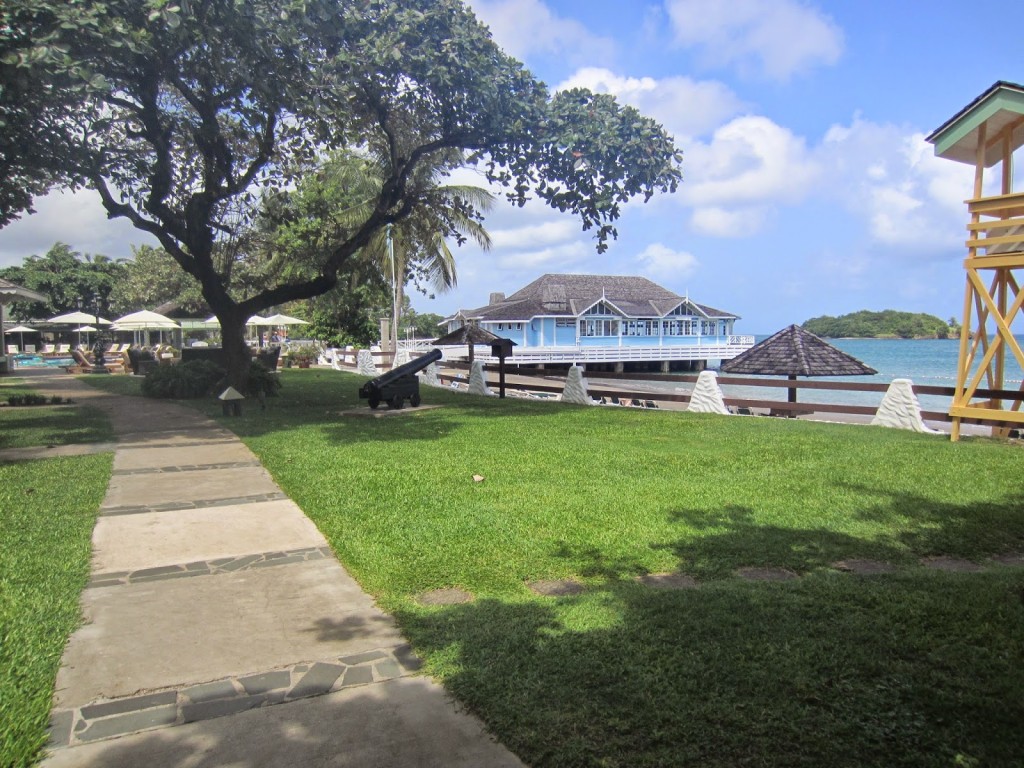 Time for bed…must be awake for snorkeling at the crack of dawn (what were we thinking?). It’s a good thing I brought 8 bathing suits because I wore two today and they’re not dry yet. We also almost used an entire bottle of sunscreen today trying not to fry in the sun. Everything is nice, but we’re looking forward to seeing the other two resorts because this one is a bit limited in food options. Tomorrow we have a
reservation for the Italian place at the Sandals Grande St. Lucian.

The crickets here are ear-peircingly loud. They sound like electronic beeps. The first night we were like, what the heck is that crazy LOUD sound?!?!? I thought maybe frogs, but they told us they’re crickets. I haven’t seen one yet, but I can only imagine they are the same size as the cats. Thank goodness we’re so exhausted or we’d never get to sleep with all that racket!