I needed some time to process, to fully think about what the Women’s March on Washington meant to me. The experience opened up something inside of me that I had shut down and closed off. Living in the South has always been a challenge for me even though I made the choices that brought me here. I wanted to work in the music industry. I have a wonderful job that has led me to stay here and make a life in an area with reasonable living expenses, a husband who I love, and the ability to travel, but none of these things has made it easier for me to be here in a culture where I always feel on the outside or as a friend put it so aptly, “other.” I had never fully experienced what it felt like to be an outsider until I moved to the South and people called me a Yankee and constantly asked me where I was from. When I would reply that I was from New York, they would ask me what country I was from due to my ethnic ambiguity. This still happens to me today and I can only attribute this to the fact that the people asking are not well traveled, maybe not well educated, or just plain rude. Because what else would prompt a stranger to ask someone who looks different from them where you are from and then call you a name? In effect it says, “You’re not from around here, you don’t look like us, and you don’t belong here.”

And you know what? This is a feeling that black people in America feel all the time. So while I am Italian and considered “white” in this country, I can empathize with what it feels like to be judged by appearance.  That’s where it ends. I cannot relate to having people in my family tree who were once enslaved, beaten, bought and sold. I cannot relate to watching people from my race shot by police officers, or pulled over and arrested because of their skin color. I cannot relate to the psychological weight that comes from being part of an oppressed people. And yet, I hear many conservative folks talk about how black people are working the system, using their welfare to buy fancy cars, cheating the government, not willing to work hard…waves of judgment stemming from generations of privilege that goes unacknowledged because of the lack of ability to put oneself in another’s place.

I live in the South surrounded by neighbors who own guns and openly discuss the automatic rifles that sit in their closets. This does not make me feel safe. It does not make me feel safe when family members talk about handguns newly purchased or bring out the latest addition to a collection of weapons that serve no other purpose than to kill or maim. I live in the South where a proposition was voted on last year that says abortion in a case where the life of the mother is at stake is prohibited. I still see the stickers on cars all over town of people who think the life of a woman takes second place to the fetus she carries. I see stickers that say “Trump that Bitch,” “Hillary for Prison,” “I have guns and I’m not afraid to use them,” and on and on the list of one-sided offenses goes, spewing hate from the backs of vehicles all over the town where I live. Sometimes these stickers sit next to an ichthus, the symbol of a fish which is used to represent Christianity and declare to everyone on the road that you are a Christian…but that you also think “Bitch” is an appropriate thing to call the most qualified woman ever to run for President. The puzzling thing about the evangelical culture that exists here is I don’t see it representing Christ in a way that those outside of the culture would desire to be drawn to him. As someone who grew up in the church, went to a Christian university, and is familiar with the teachings of the Bible, I am repulsed by the culture of church that I am surrounded by. I have not lost my faith. I have not lost my love for God. And yet because I do not go to church, there have been several occasions where I have been witnessed to in an attempt to be converted…to something I already believe, but apparently not in a way that is satisfactory for an evangelical in the South.

So I live in the South, but have never felt a true sense of belonging here because, to put it bluntly, these are not my people. There are oases of friends who live here, face the same struggles, are like minded, and provide outlets of genuine conversation that is raw and honest and real in every way. I work with some of them and have dinners or go for hikes with others. Those are the people I cling to in this culture where I feel “other.” So, last week when I went to Boston, then to New York, and finally on to Washington, I was given a reprieve of this feeling and felt an instant relief at not having to defend or explain why I am who I am. As I stood in a crowd of people on a subway platform in DC getting ready to march for women’s rights, a cheer broke out and I felt chills go up and down my spine. A friend in our group who had traveled to the march looked at me and laughed, saying, “Leah, do you feel like you’re with your people now?” And yes, hell yes, I did. 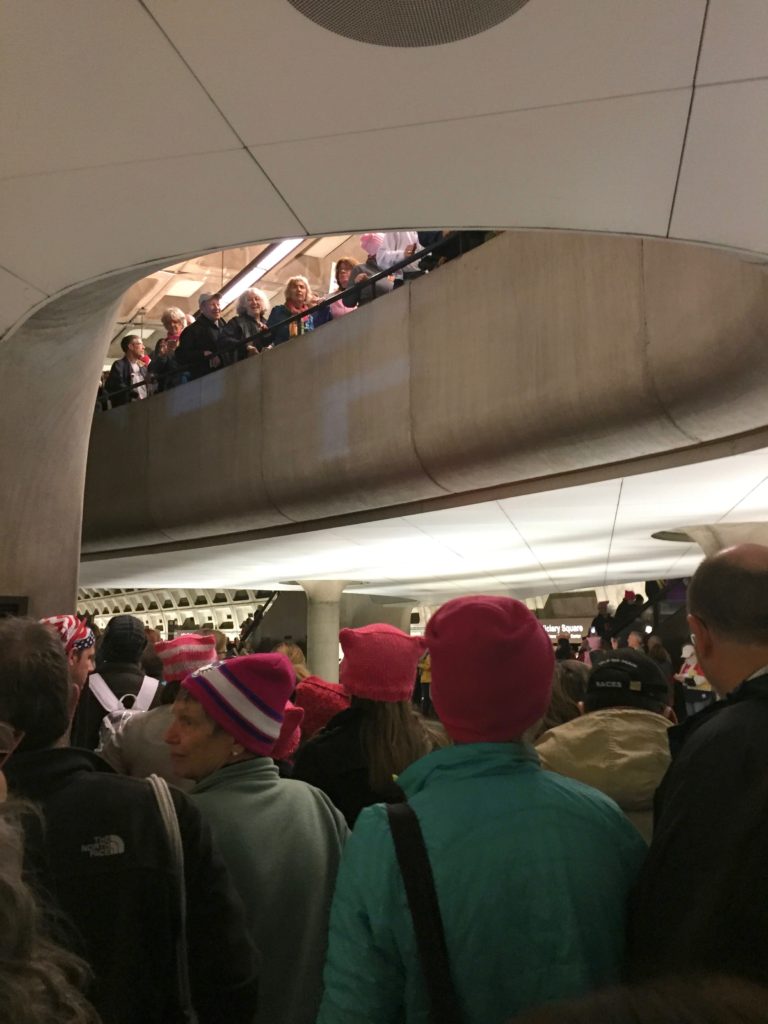 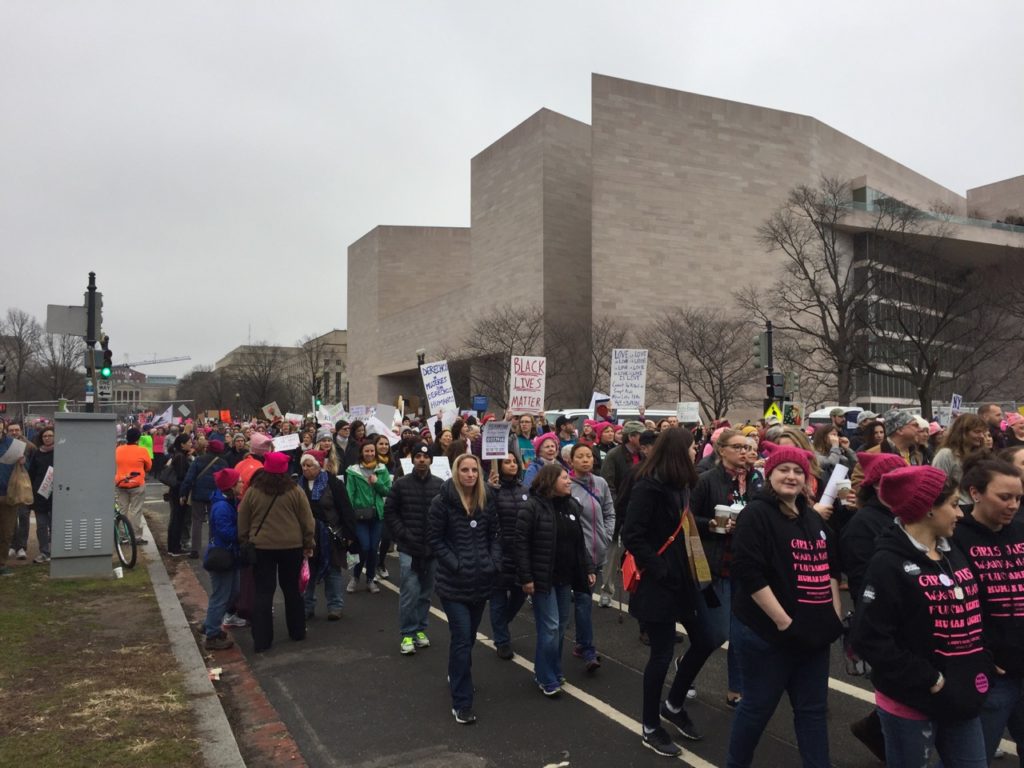 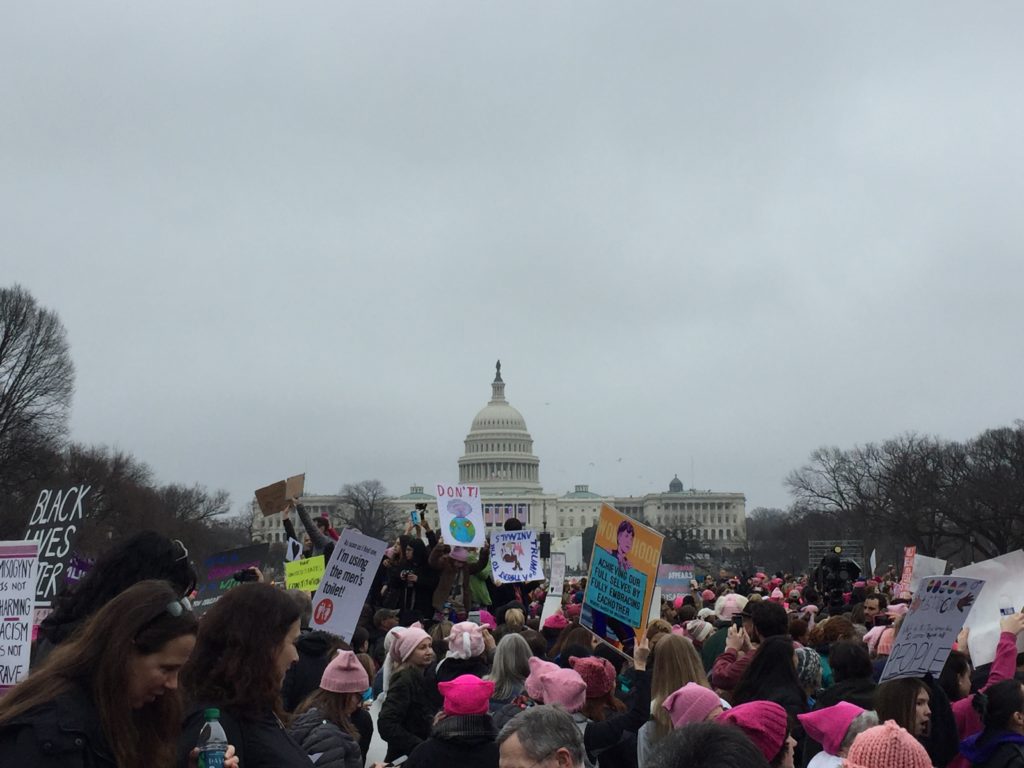 In the weeks leading up to the march, the reactions to the announcement I was going were mixed. My husband was supportive and proud of my involvement. Some friends immediately wanted to know if they could come too. And others reacted with an awkward “Okaaaay…” or just tried to change the subject, wholly disapproving of my reasons for going, but not wanting to offend. My main reason for attending the Women’s March on Washington was to stand in solidarity with other women who wanted to make the statement that sexism, sexual assault, and discrimination against women is not acceptable in any way. I also wanted to be one of thousands sending a message to the incoming president that I find his actions toward women to be deplorable, disgusting, and completely inappropriate for someone who is meant to be a leader of integrity and an example for young people in our country to aspire to. In addition to this, I wanted to march for all the women who could not be there in person, who feel marginalized in some way, who have been abused, who are poor, who have been discriminated against because they are women, who have been denied access to routine preventative healthcare, who have been forced to make the decision to terminate a pregnancy because their life or the life of their unborn baby was in danger. I ache and I weep for these women.   Aside from donating to organizations that support them, I wanted to physically do something to show support, I wanted to be counted among those who stood up. 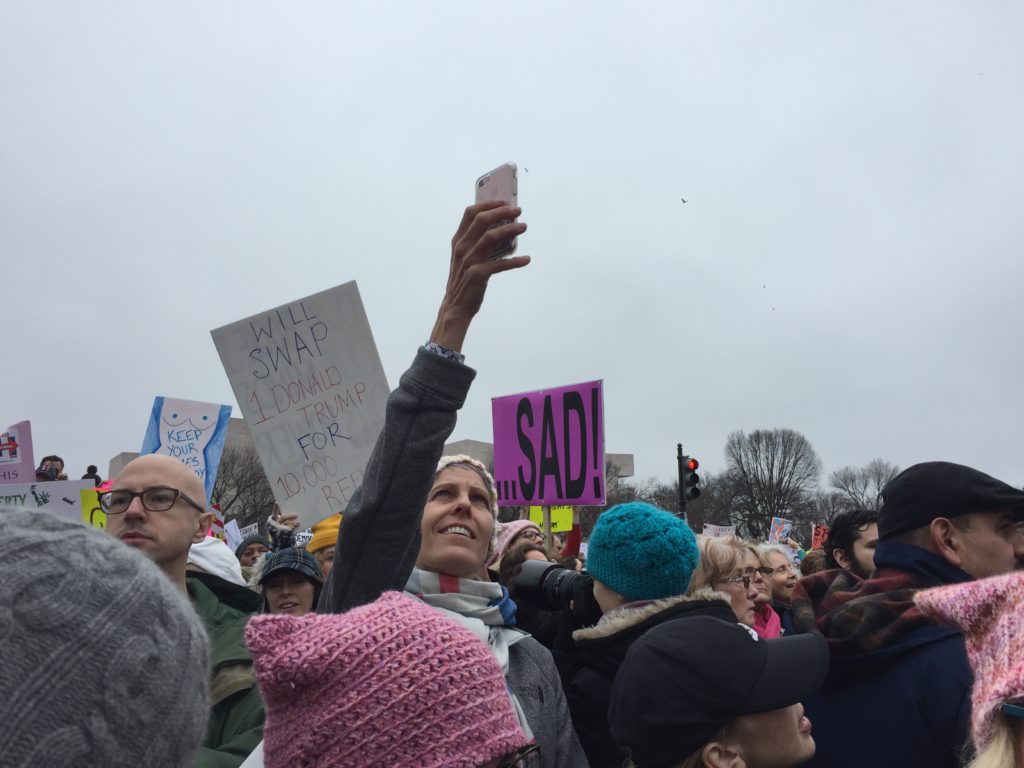 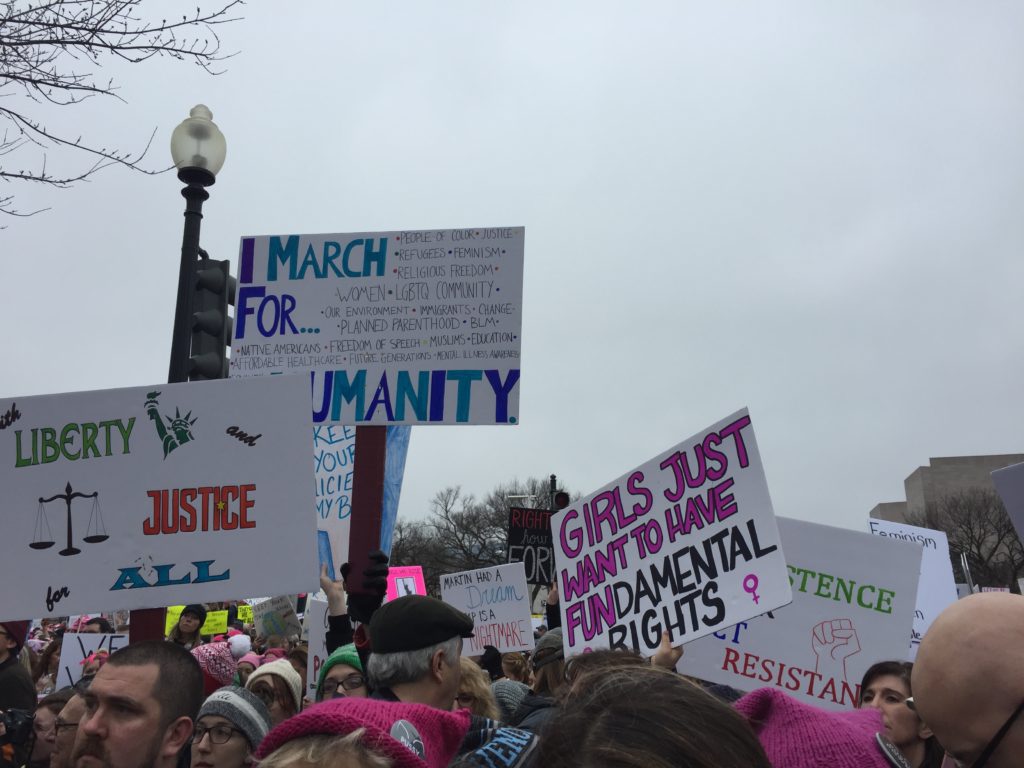 The march was uncomfortable. We stood for hours, crammed in with thousands of people, personal space nonexistent. Some cheered, some clapped, others chanted, and the energy was palpable. We stood waiting for the march to begin, not being able to hear the rally which ran 45 minutes over time. Finally when it was time for us to march and for the barrier at the end of our street to be removed, the word started to get back to us that the march had been cancelled due to the number of people who had shown up. The initial feeling was one of disappointment, but then we turned around and walked up the mall toward the Washington Monument. There was an explosion of people into every street, down every avenue as women and men standing for a cause literally swamped DC with their presence. Seeing people on the steps of the monument made me think of images I’ve seen from protests in the 60s and 70s. We walked down Constitution Avenue, saw the White House, and took pictures of what we were witnessing around us. Exhausted and worn out, we continued walking to find some food and try to mull over what had happened during the day. Consensus was that even though the march wasn’t what we expected it to be, we were glad that we had taken part and made the effort to be there. Later that night as we sat looking at pictures from marches around the country and around the world, the enormity of this peaceful protest sunk in. We had made history. Women had spoken. We are here. We are listening. We matter. 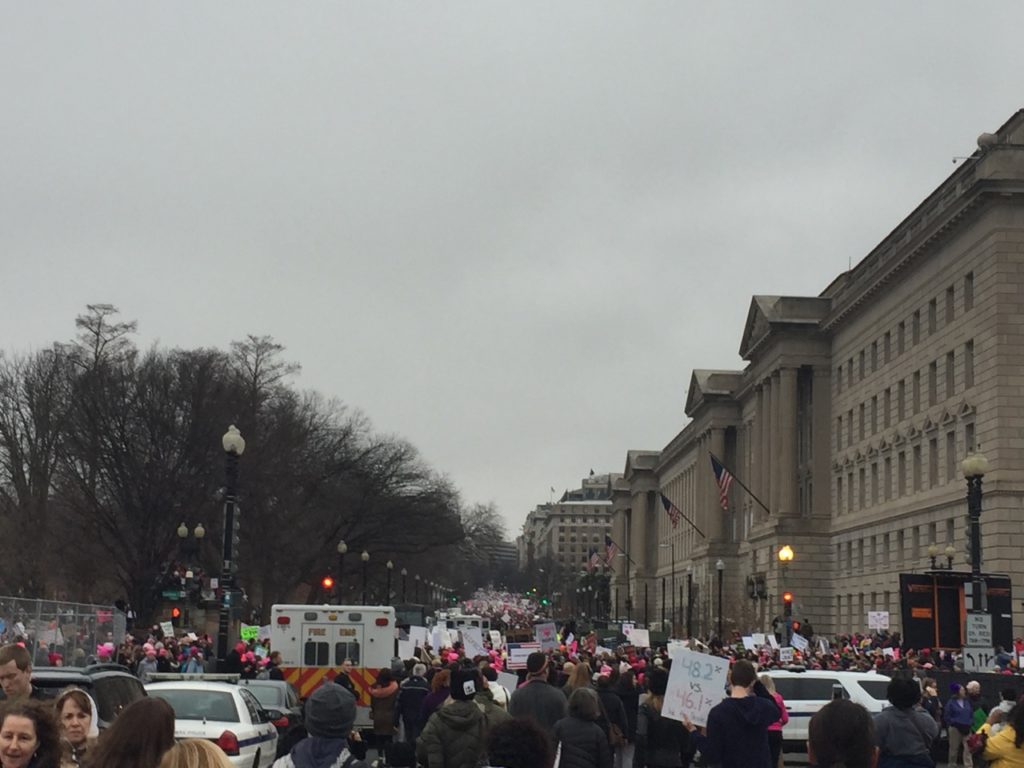 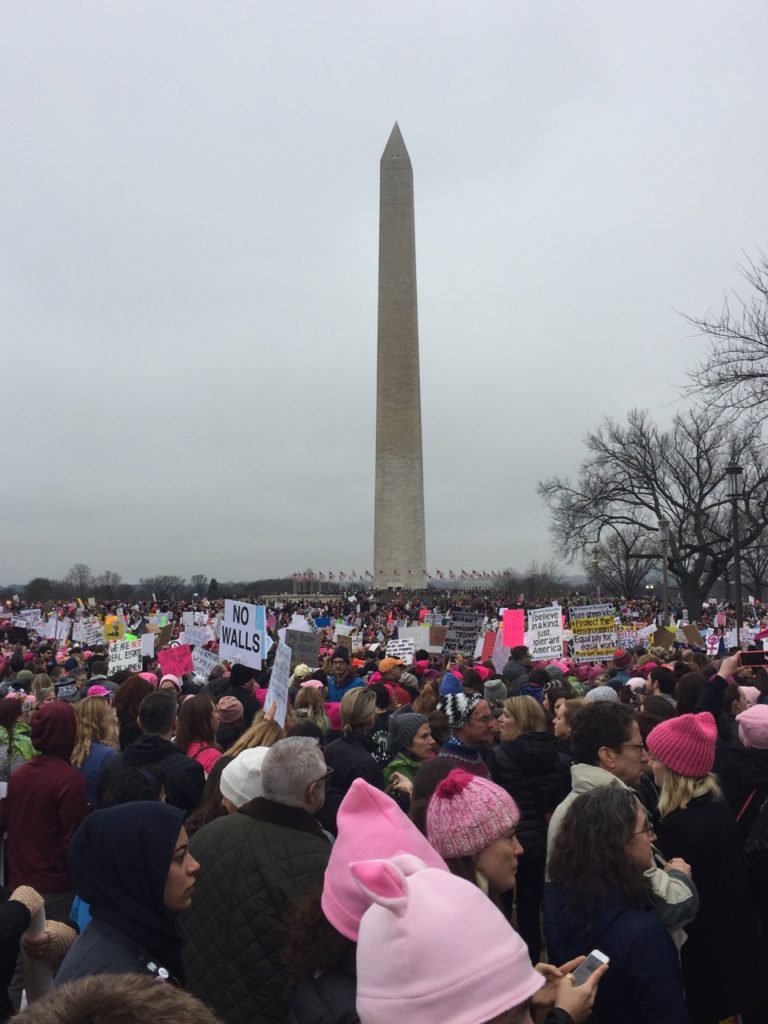 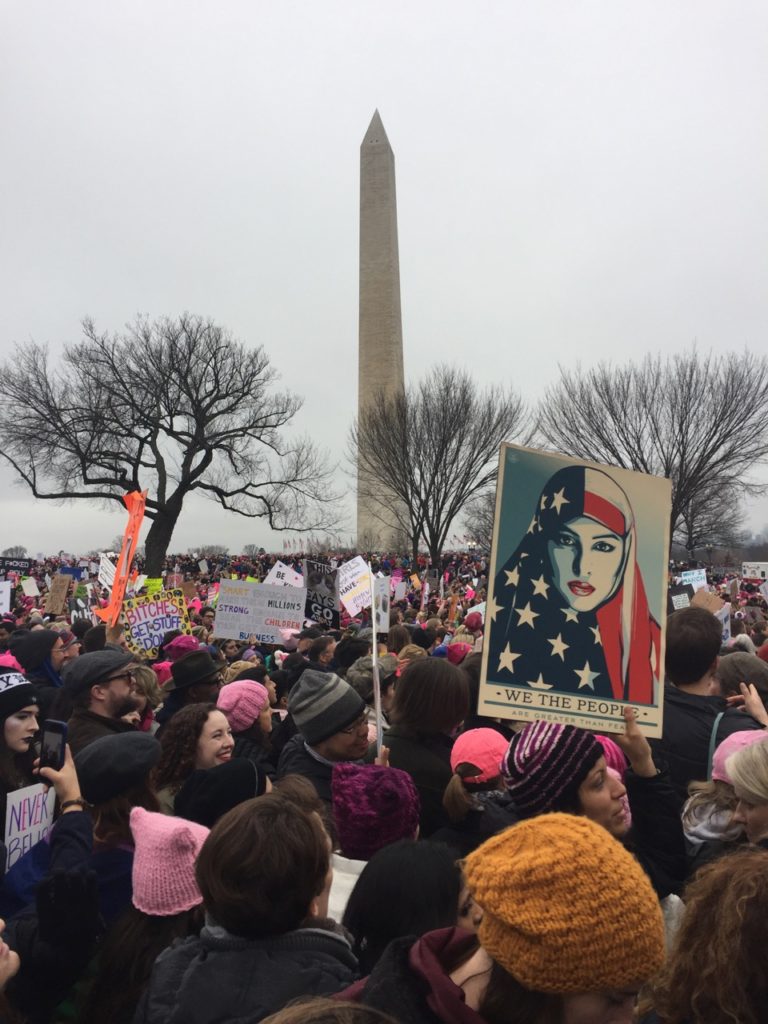 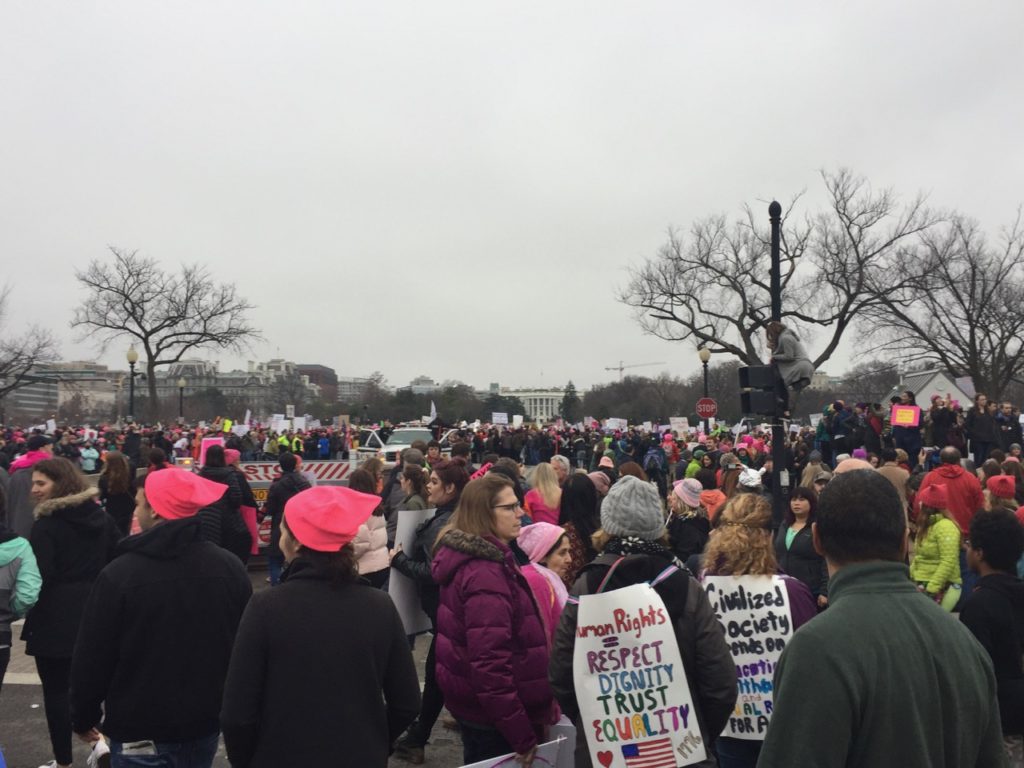 As this week has passed and I’ve read the news, I have felt like I’m going to get an ulcer. My body is responding physically to the stress of watching people lose their freedoms, watching refugees in desperate situations be turned away, watching Muslims fear for their safety, watching the people of neighboring Mexico be degraded and despised by our President, watching the National Park Service be silenced and then rise up and fight to distribute facts about the state of our environment to the public, watching a freeze on federal hiring, worrying about the security of my dad’s job and the important scientific work he does, worrying about the many millions of people who could lose health coverage, worrying about the concept of putting our country first without regard to how it could harm or hurt other nations, worrying so much about so many things, feeling powerless to change any of them. I cannot quell the need to stay informed because I think that in a time like this, having eyes that are open to the truth of what is happening around us is an absolute necessity. As rampant lies spew from the mouth of our leader, reminding oneself of what is true and rooted in fact is imperative.

Going to the march, seeing thousands of women, each with their own unique story, stand up for the continuation and expansion of their rights was a spiritual experience I will never forget. It also made me feel free. I had the realization that because of where I live, I have a subconscious defense mechanism that is always on, humming in the background, leaving me emotionally exhausted from feeling like I am constantly having to defend who I am and why I believe what I do in small ways all the time. Being surrounded by women who felt the same urgent struggle toward a cause gave me the freedom to be myself in ways I cannot on a daily basis.

There are a couple of friendships in my life that have palpably changed because of this election. For me, there has been an exposure of those for whom sexual assault, racism, and bigotry were not deal breakers in the vote for President. There are some in my life who support this man unashamedly, and I am in an honest struggle to not villainize these friends and family members and to still see them as good people. It is a struggle I am unashamed to admit because I know that many of us feel this. That people on both sides are looking across the divide and trying to figure out how to build a bridge. 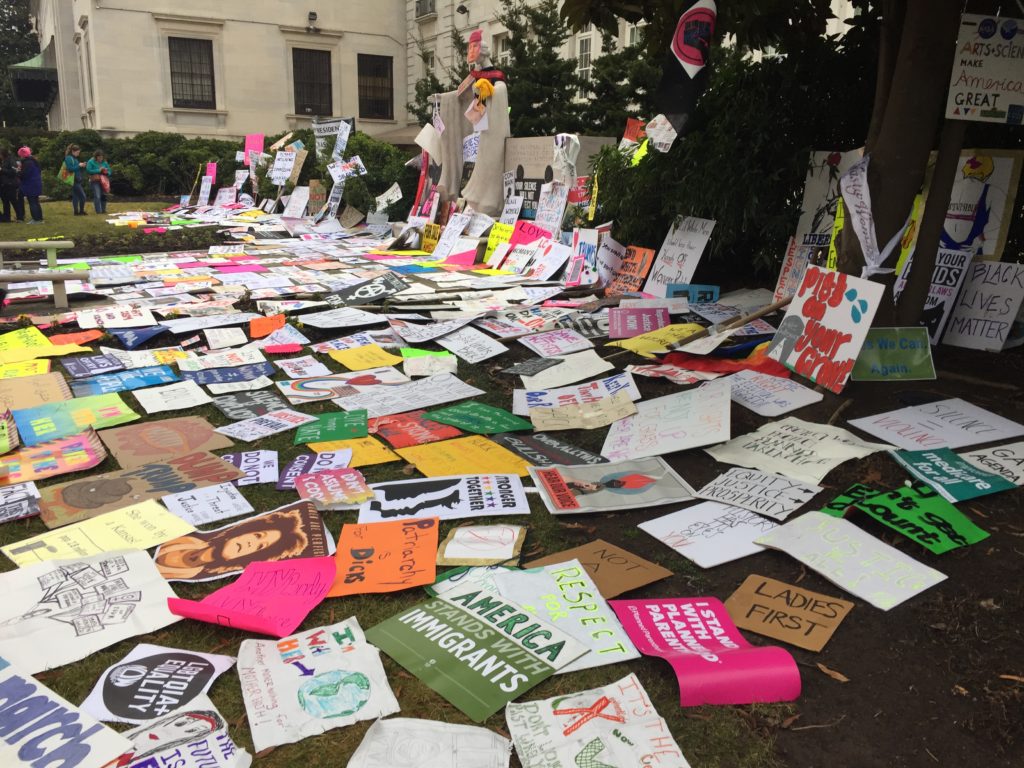 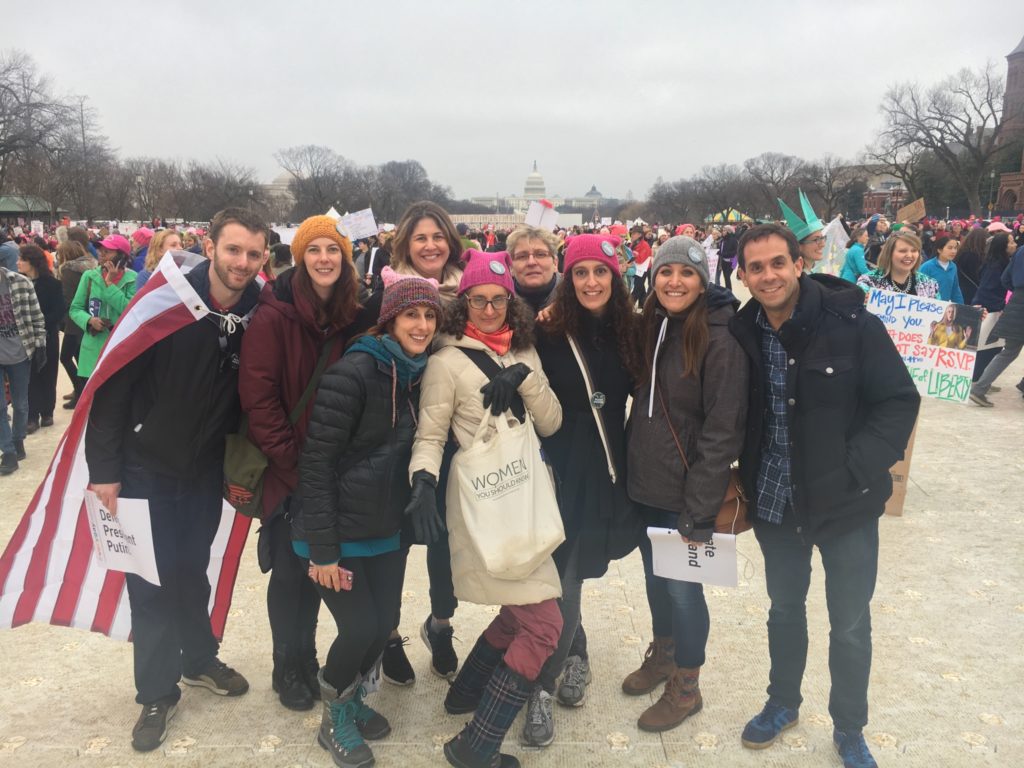