“Dogs are the closest we come to knowing the divine love of God on this side of eternity.”   Anne Lamott 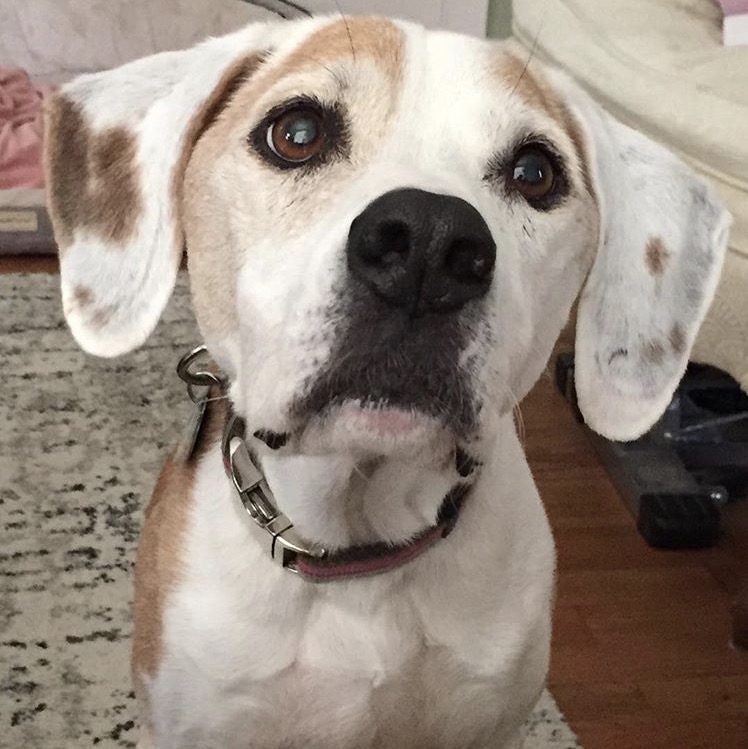 Today our hearts cracked in two. There is nothing in this world that prepares you for the emotional devastation that is losing a pet. Rob and I don’t have kids, and as clichéd as it seems to say (especially to people with children, and I get this), our pets are our family. When we were dating there was a clear understanding that each of us came as a package deal, Rob with Lacy, me with Maddox and Myrtle. I’ve never been a dog person and he has asthma around cats. This is what we do for the people we love. And eventually the pets become creatures we love too because we’re all figuring out this crazy mess together.

Lacy was a shy, stressed out little dog when I met her, and she’d already come a long way. She lived in a house with a bunch of guys, which would have made any woman go nuts, but she happily navigated a world of dirty sock smell and other dogs who weren’t always as kind as her. She barked a lot and kept a general patrol of every noise, car, and pizza delivery guy who came to the door. She stole all the covers from Rob on a nightly basis, but he never seemed to mind. One thing was clear about this cute little hound with the floppy ears, her heart belonged to Rob and Rob alone. 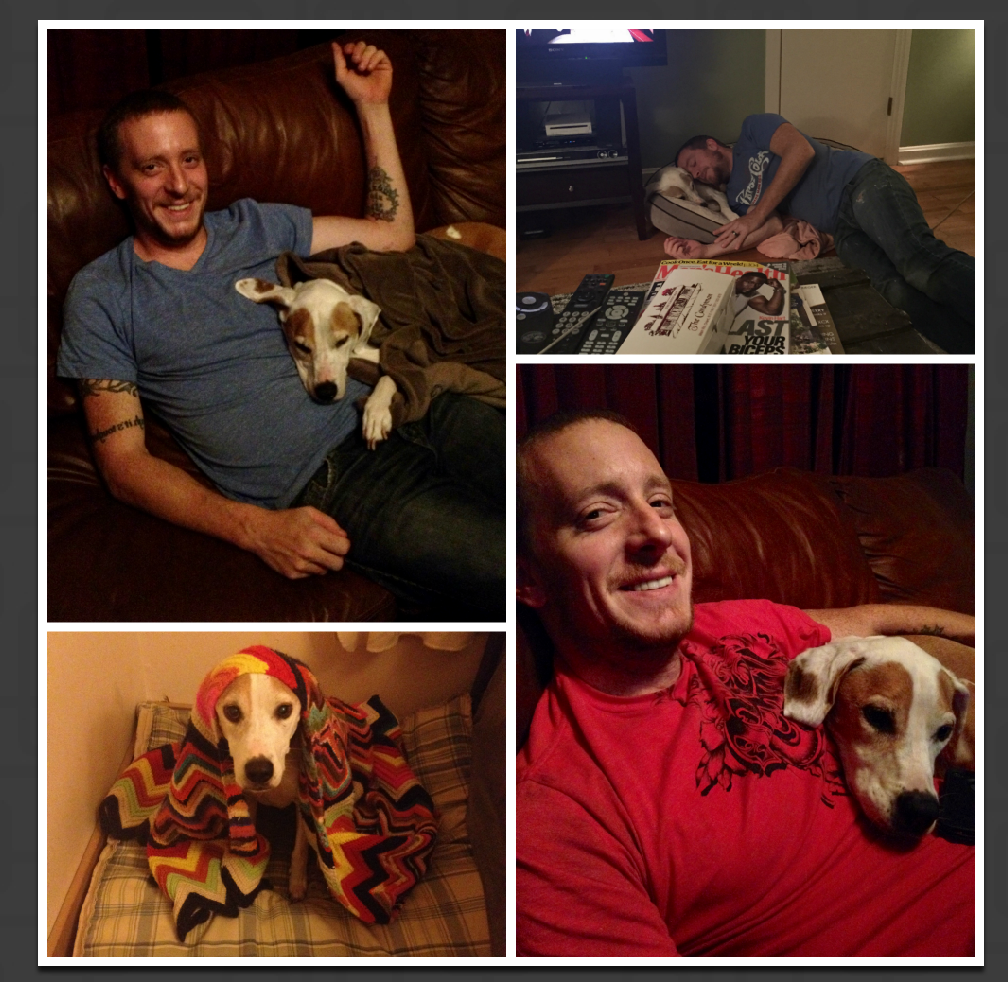 Rob and Lacy found each other at a pivotal point in both of their lives and I think it’s safe to say that she was his saving grace as much as he was hers. Being true to his nature, Rob went to an adoption property to find her, and when all the other dogs rushed the fence, he only had eyes for the shy one hanging back in the corner. After paying $20 for a dirty little pup with ticks and fleas who was scared of everything, he cleaned her up, and so began the love story of a man and his dog. Anyone who knows Rob knows how much this man adores dogs, but Lacy was the apple of his eye. Through the years as she gradually came out of her shell, she was still only her true self around him.

When we were getting married and talking about introducing the pets to one another, there was a lot of concern and worry over whether they’d get along and how on earth my house would handle a noisy barking dog. I had some serious anxiety about it. Turns out, Lacy didn’t have much to say to the cats and didn’t mind that they lived here too. Maddox would often chase after her, batting her with his paw as she’d walk past in an effort to rile her up and get her to play, but she marched to the beat of her own drum. When Myrtle and Lacy were first introduced, Lacy took a good long curious look at Myrtle, tilted her head, and immediately put Myrtle’s whole face in her big dog mouth. That was the one and only incident we ever had between the pets because maybe she just wanted a little taste. Lacy was a kindhearted, sweet soul. She didn’t bite and we never needed to worry about her hurting anyone or anything. This rang true when a little neighborhood kid came to our house one day and got so excited to see a dog, he immediately ran and face-planted right on top of her. She was unfazed by the tiny human.

In the past couple of years that I’ve worked from home, I was able to know her better. She loved to throw up on the white couch right after Rob left for work, so she and I could spend extra time together while I cleaned it up. After years of only being let out on a leash, she finally had the freedom to run in crazy fast circles around the backyard. As she settled into the peace of our home, her barking quieted and she spent her geriatric years lying in the sunshine and soft grass. There were many times when I looked out my office window to see her head raised to the sun, eyes closed in total bliss while sniffing the summer air. No matter how much I checked in on her during the day, she waited for the moment she would hear the car door, signaling Rob was home. Immediately, her face would perk up, the little ears would flop happily, and she’d excitedly jump up to meet him. They played in the backyard. She would fly past him as he tried to catch her and never succeeded. She was a free spirit who adored one person in this whole world above every other. 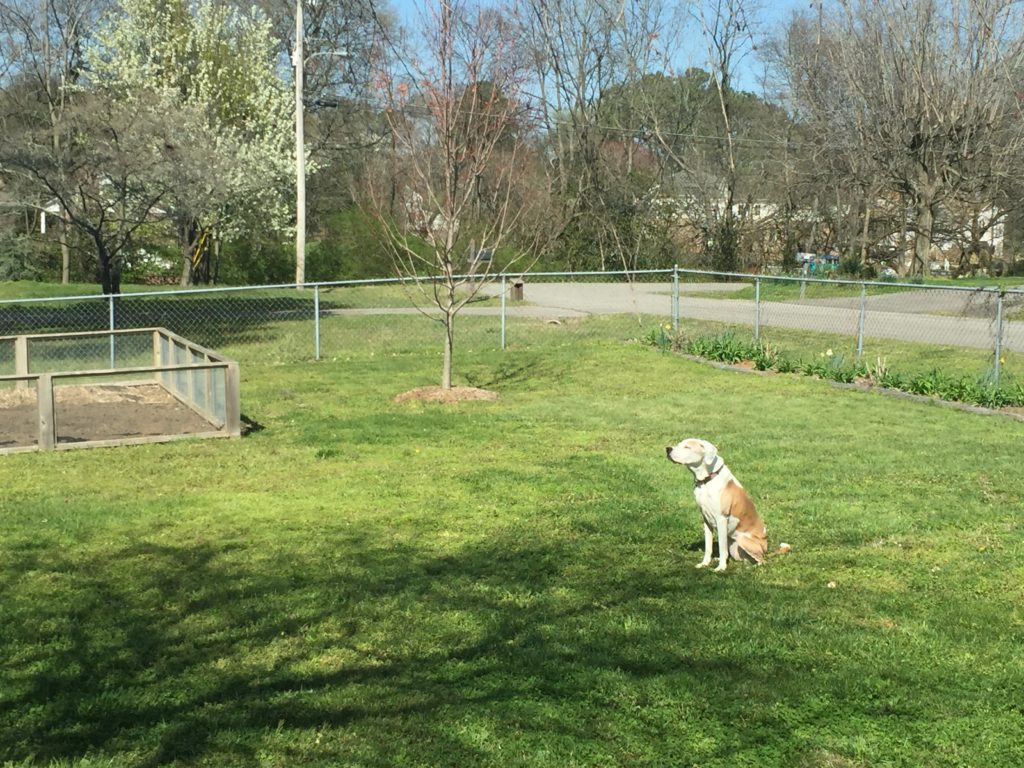 At 16 years old, she still had a spring in her step, and of course we hoped she’d live forever. This weekend she took a turn, most likely a stroke, and lost the ability to walk and stand on her own. We cried a lot of tears, trying to decide what would be best, keeping her comfortable, shoring her up as she tilted like a ship in stormy weather. Rob lovingly held her, begging her to get better. He was with her every second. I watched her look at him, following him with her eyes, trusting him to keep her safe, knowing he would take care of her. I knew I was outside of it. What they shared was something special. Today, we held her as we said goodbye, shed tears that are still falling, and hope that in the next life, she’ll be waiting there with her cute ears and tilted head to run ahead of us through the pearly gates.

Our hearts are broken, but you will be loved forever, sweet Lacy…

Previous Post: « Making Connections As An Introvert Is So Damn Hard
Next Post: The Midlife Crossroad – Trying To Get Unstuck & Move Forward »