You guys, I’m in Gatlinburg, the armpit of Tennessee, also known as the Vegas of the South, also known as the grossest place on earth, also known as the white trash capitol of the world, also known as air-brushed t-shirt heaven…shoot me.  The thing is, people actually come here to just spend time in this town.  What is wrong with them?!  We are staying in this town solely for its proximity to Great Smoky Mountain National Park.  We wake up early, eat breakfast before the crowds arrive, and head into nature as fast as we can to avoid all the insane crazy idiots who vacation here.  Then we hike, come back into this hell hole of abysmalness to eat dinner, and head to the three distilleries in town that give you free moonshine tastings…which brings me to my current state of drunkenness while writing this blog.  Moonshine is awesome, how was this stuff ever illegal?!  You sidle up to a sticky counter where a very enthusiastic, pimply youth who doesn’t get enough attention at home yells at you and tells you to drink more free liquor.  In fact, we discovered you can get totally drunk for $3 in Gatlinburg, $1 tip for each distillery.  Old Smoky Moonshine is gross and way too sweet, don’t go there.  The Davy Crockett place is much much better.  But the Sugarland distillery takes the cake as far as moonshine goes, but get there before 9 pm or you’ll only get 4 samples, and please, who can get drunk on that?  The best thing is that they give you tastings in communion cups!!!  Like, the old school plastic cups you drink grape juice out of in church, so you feel like this is some kind of holy sacrament Jesus approves of because everyone in the South is a Christian and loves Jesus, so obviously, moonshine.

Today, was maybe the best day of my life, except for being born and marrying Rob, because I got to hike a teensy tiny, not even worth mentioning how short it was, portion of the Appalachian Trail.  In fact I just did the math because I’m a nerd and we hiked 0.025% of the entire trail.  Holy cow, I’m a section hiker.  Tomorrow we’ll hike another 0.04%, so look out, world.  We went up to Clingman’s Dome and walked up that God awful concrete hill till we came to the Appalachian Trail and took an immediate left to head to the Double Spring Gap Shelter, which was 2.7 miles from the Dome.  This is probably, most definitely the most beautiful stretch of trail I’ve ever been on, plus it holds the distinction of being the highest point on the AT. 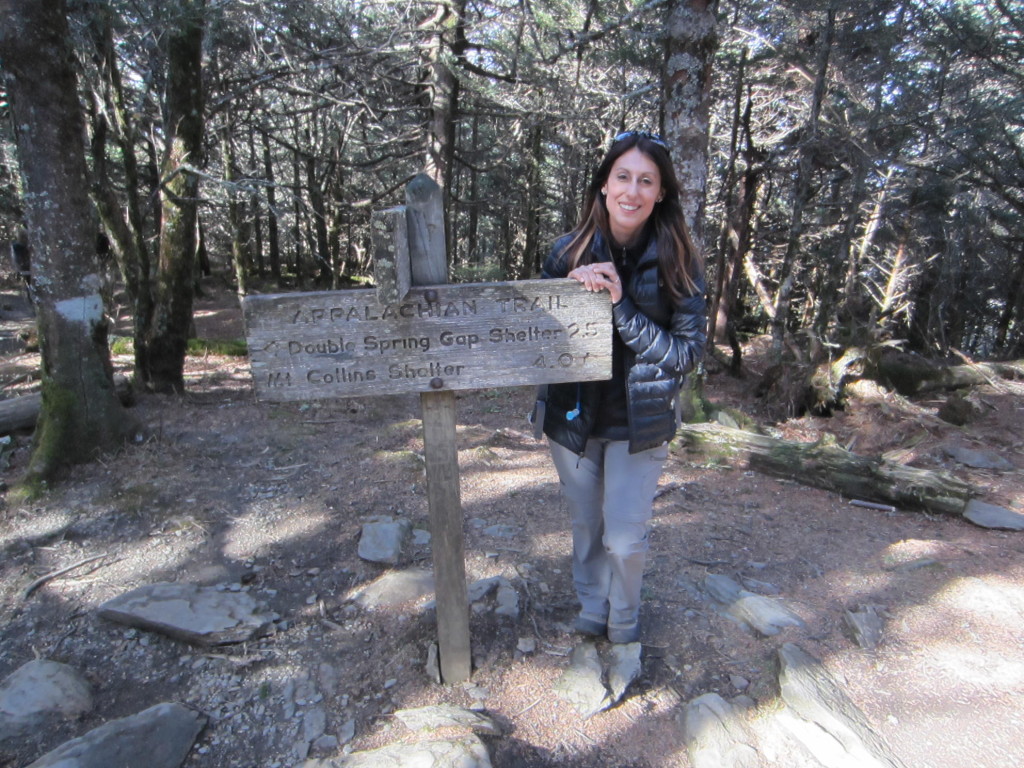 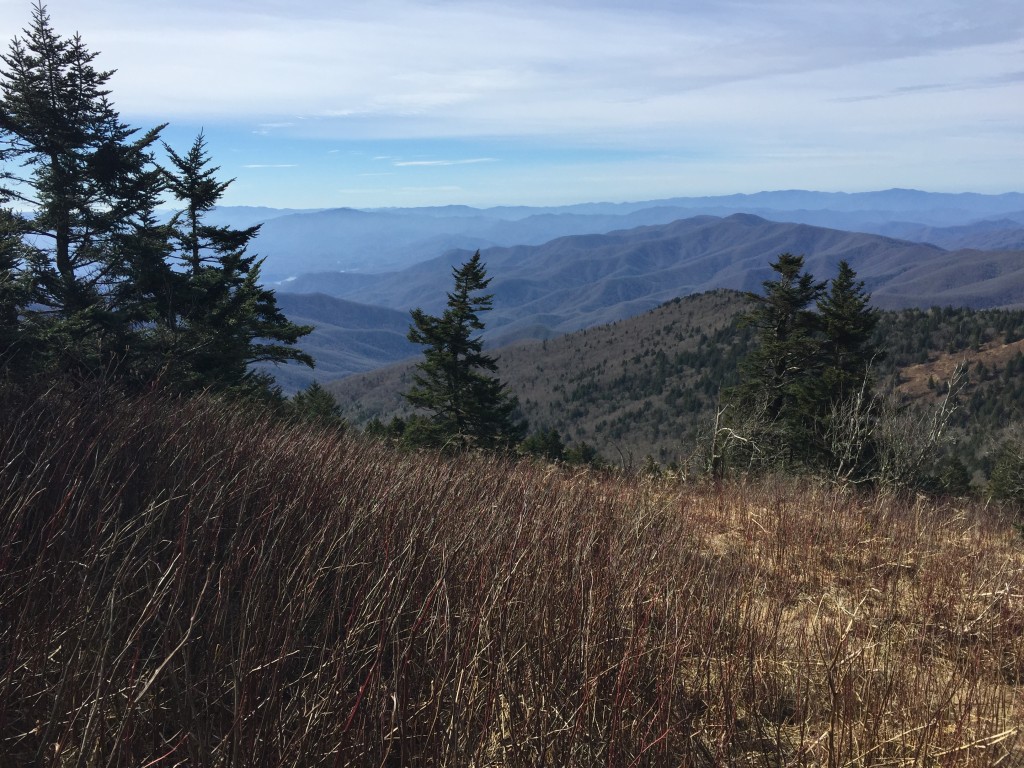 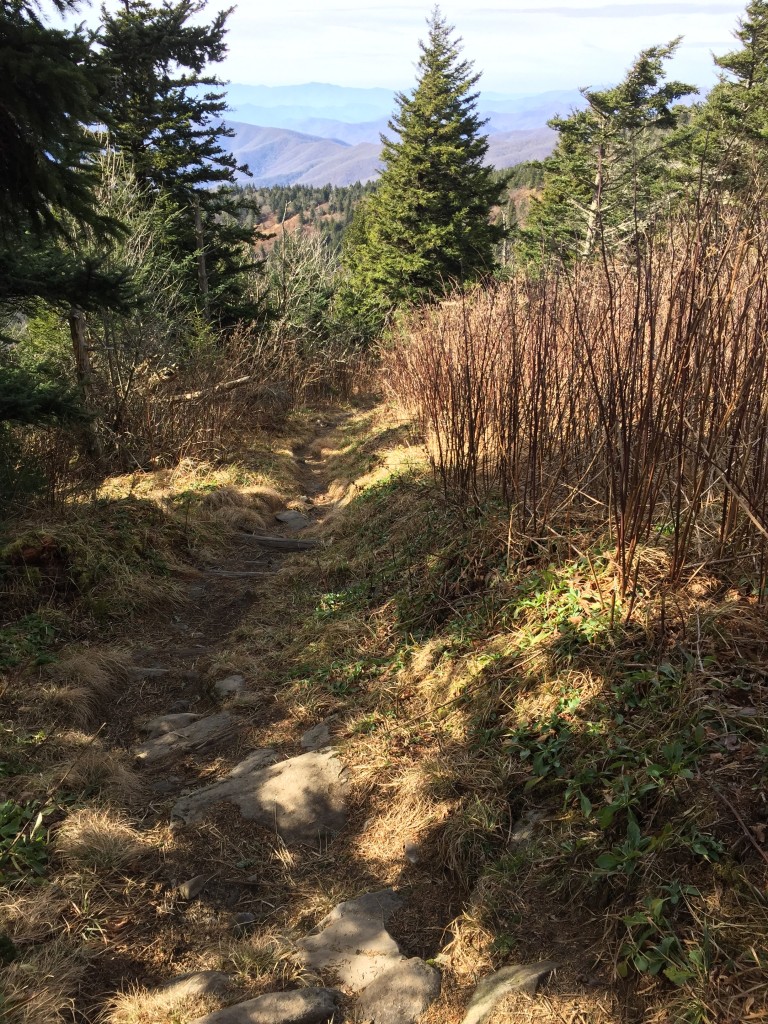 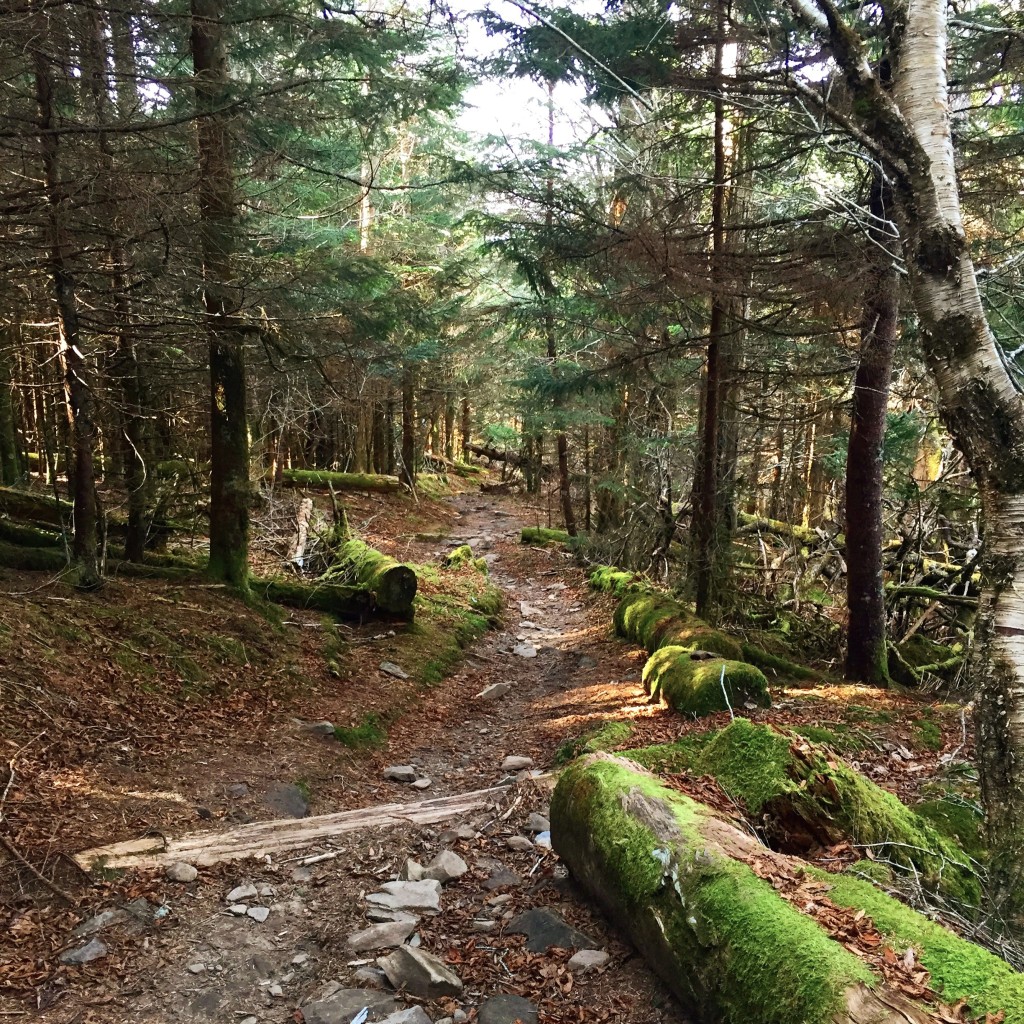 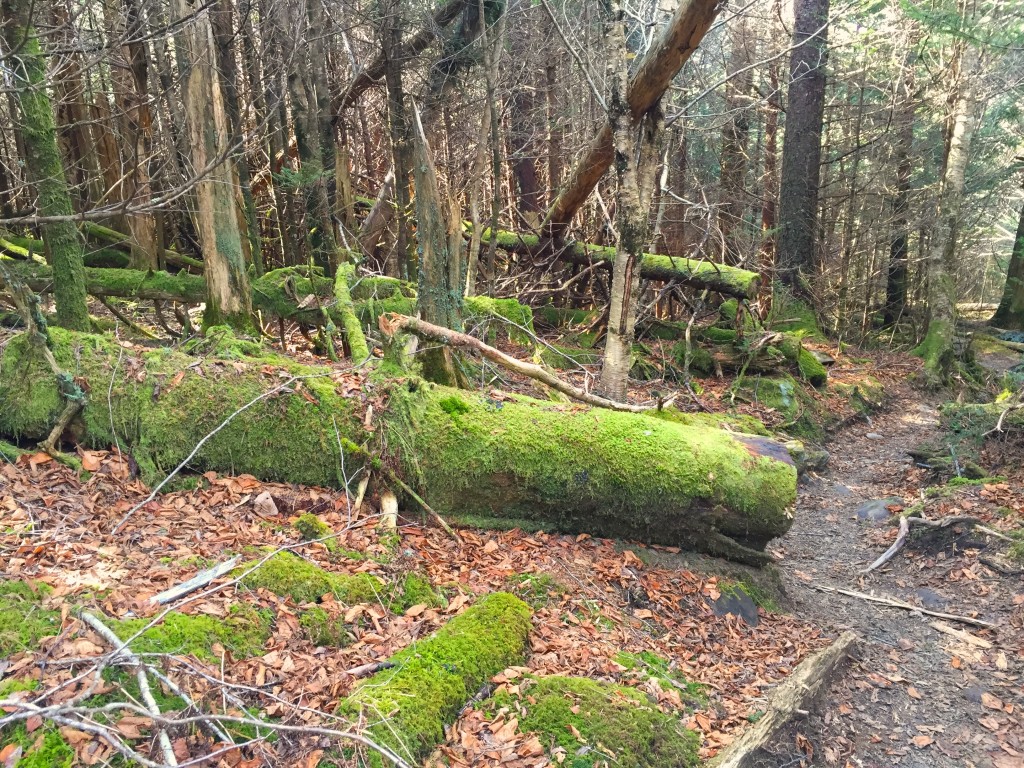 We hiked down to the shelter, which was actually nicer than I was expecting, I mean…primitive, but still nice. 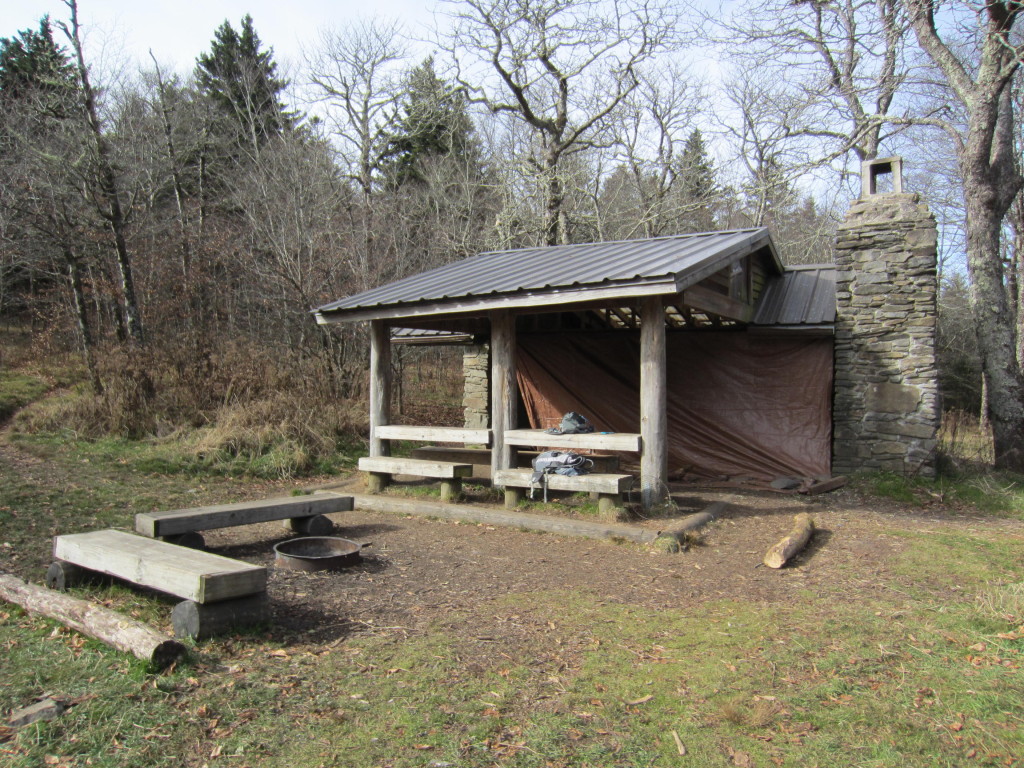 Where thru-hikers get cozy 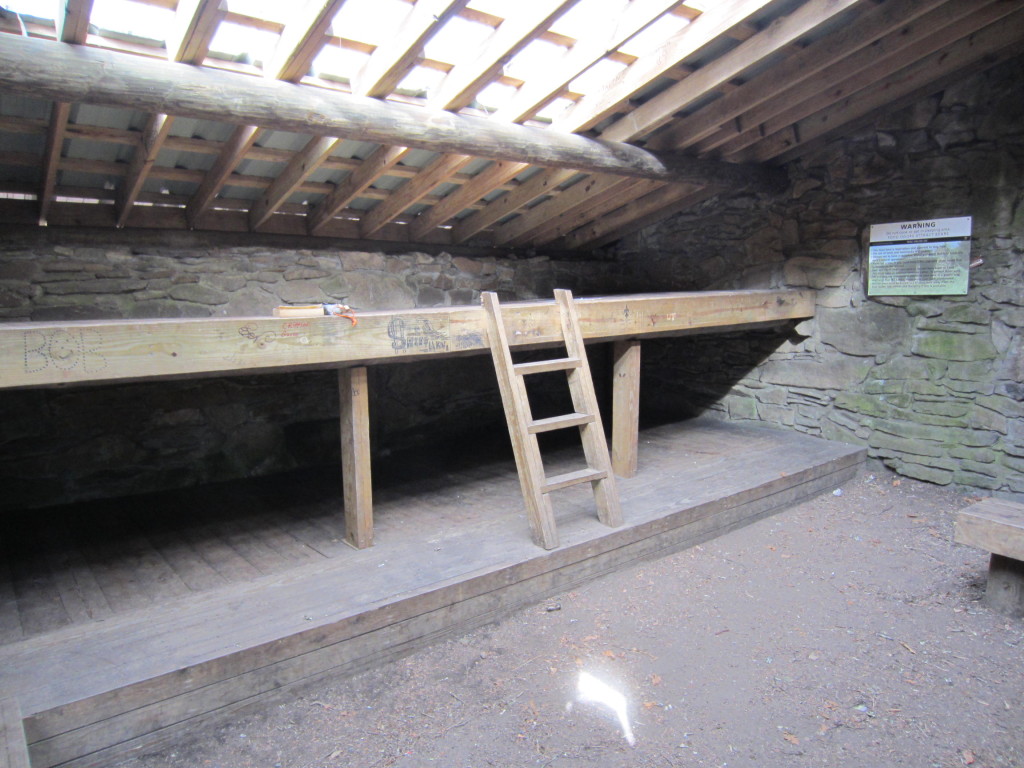 There are SO many rules when hiking through a national park… 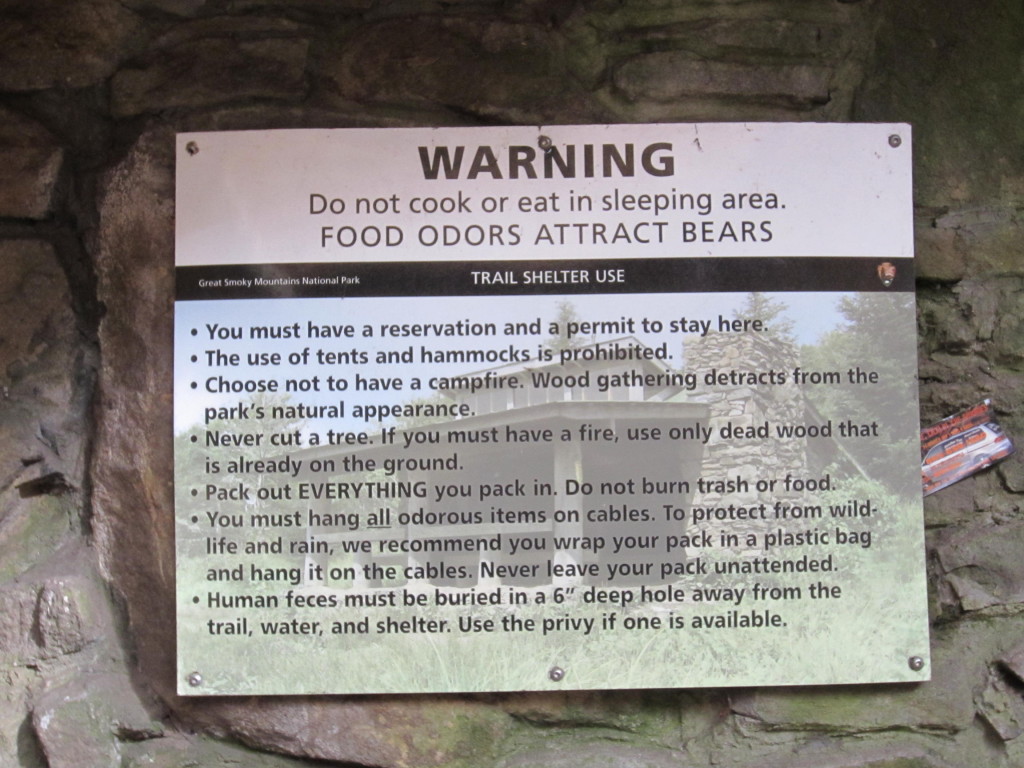 What lonely, depressed hikers read on the trail 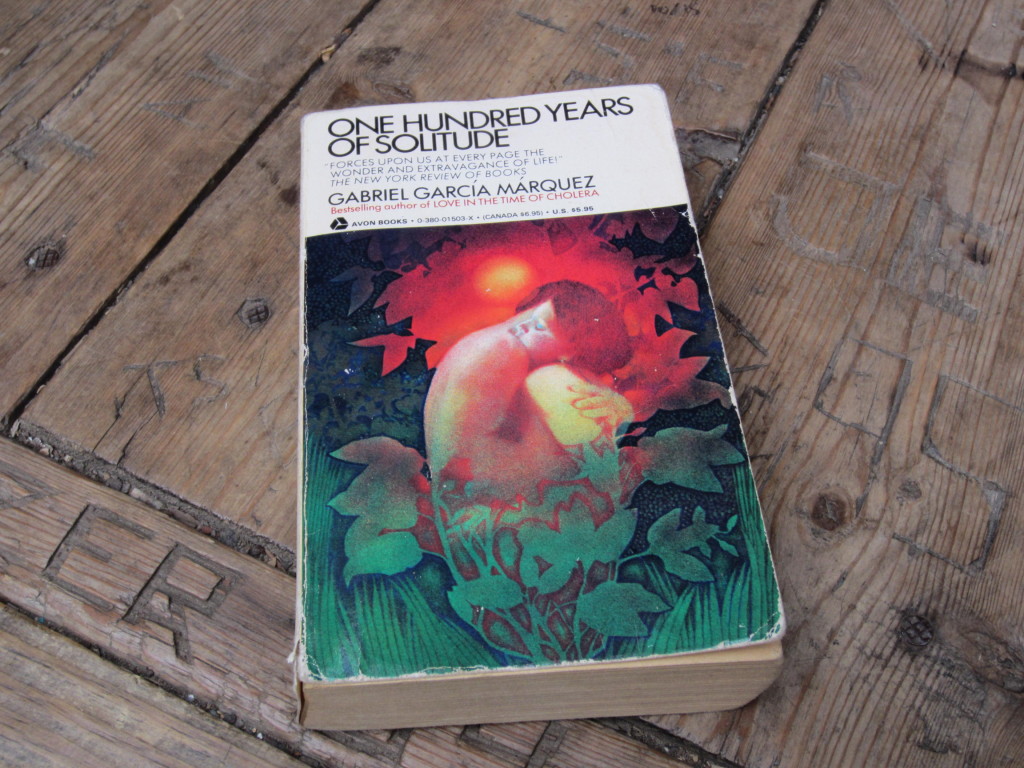 Two thru-hikers were just packing up and getting ready to leave, so I got to pepper these nice young, bearded men with questions before they set off on the continuation of their journey.  While chewing on a mouthful of Clif Bar I learned that they’ve been on the trail for 5 1/2 months and started in Maine.  They are taking illegal amounts of aspirin to deal with the day to day body aches involved with this journey. It was recommended that we quit our jobs and hike this trail and not wait till we’re retired because our bodies will crumble and decay if we do this when we’re old.  Apparently there was an older man who was attempting the 100 mile wilderness at the same time they were and ended up quitting, which, duh, that’s like the hardest portion of the entire trail, so I think that guy was just dumb to start out there.  They were wearing these cool knee supports they found in a hiker box, which I need to order from Amazon immediately because my knees hate me right now.  They also said that going back to normal life is going to be really hard after this, but that if they don’t end up getting jobs that’s ok because there’s always the Pacific Crest Trail and the Continental Divide Trail to tackle.  Yes, they plan to aim for the Triple Crown.  A few days ago they saw some bears on the trail, but the other night it was only 14 degrees and they were really cold trying to sleep.  They packed up and headed on down toward Springer Mountain and became our new heroes. 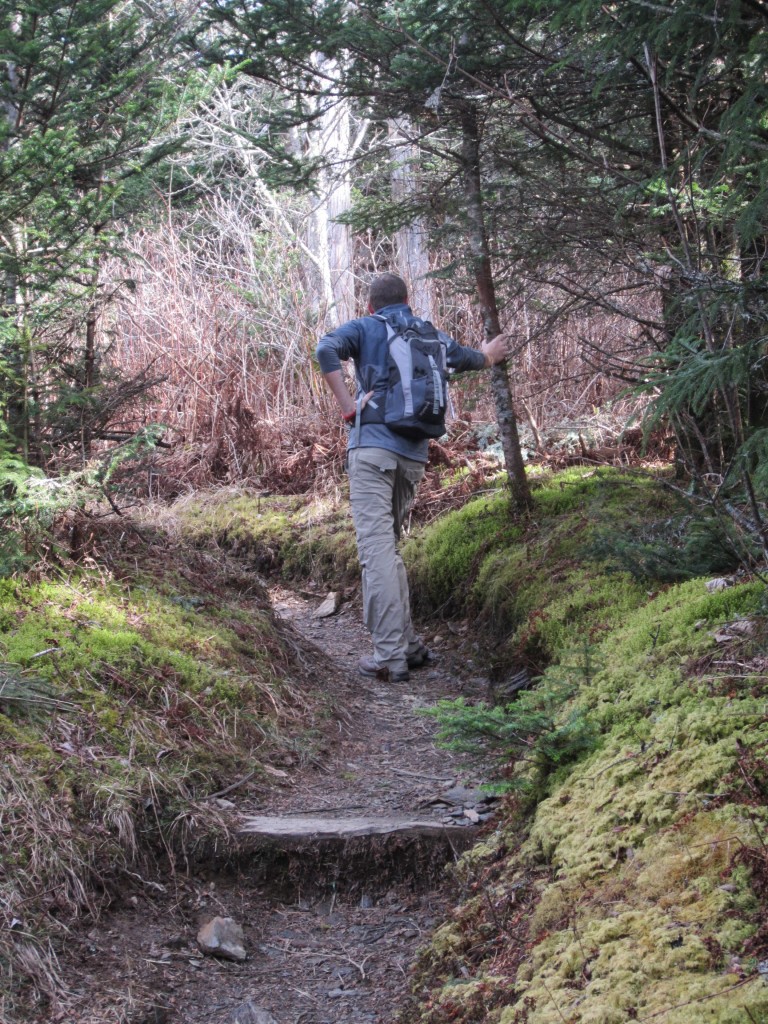 We had to stop several times on the way back up so we didn’t die. 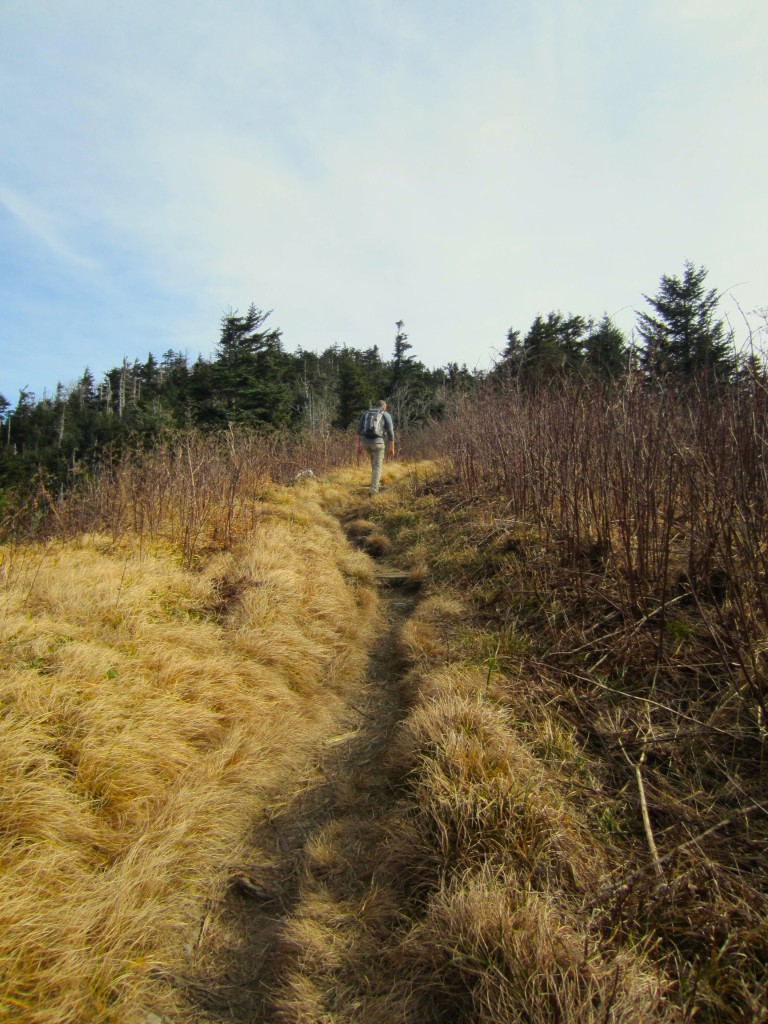 We finished up our snacks, checked out the bear cables at the shelter, and headed back the way we came, which was ALL uphill…no big deal.  We climbed and sweated our way back up to Clingman’s Dome and decided to avoid the lookout altogether because it was crawling with people, so we stopped at the information center and talked to these two badass women who were volunteers and have hiked all over these mountains.  They were amazing and if I could have taken them out for coffee and some moonshine, I would have.  We headed back down the mountain and saw a bear, which I was dying to see, but was thinking there’s no way we could get that lucky, to see TWO bears in one year, but we did.  Here is our second black bear this year.  We crouched down by the side of the road and we watched him forage for acorns without being scared out of our minds because he wasn’t 6 feet away from us, like in Colorado.  This guy was a safe distance and we watched in peaceful awe of the adorableness that is a bear butt.  Bear butts are almost as amazing as cat’s paws. 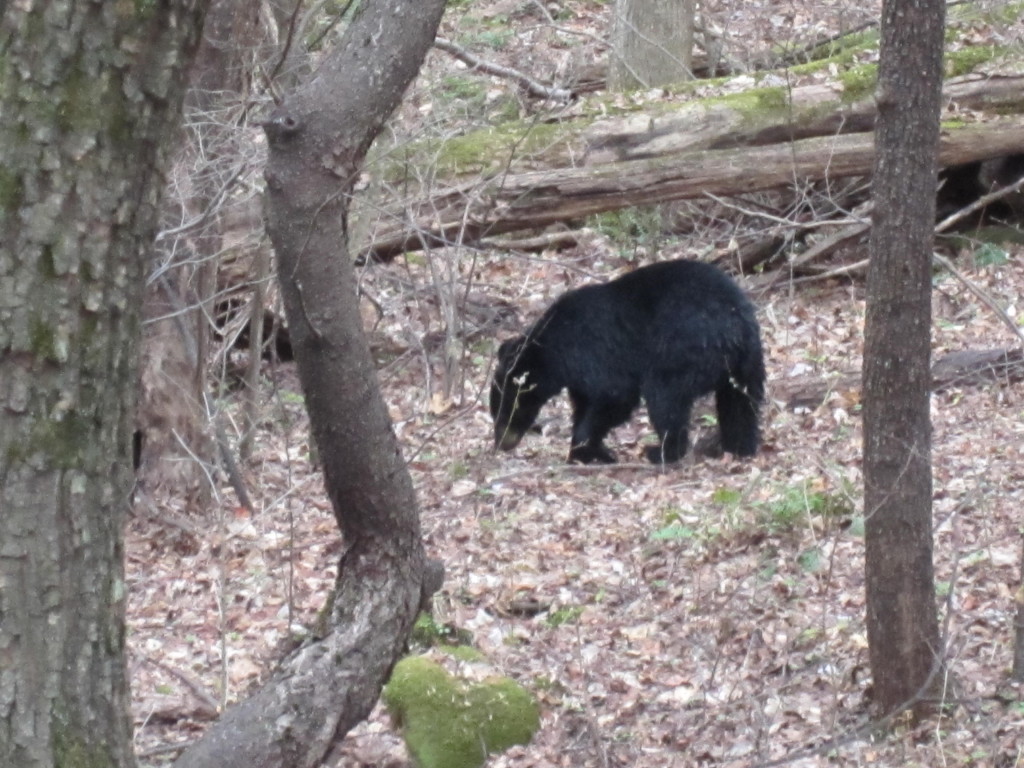 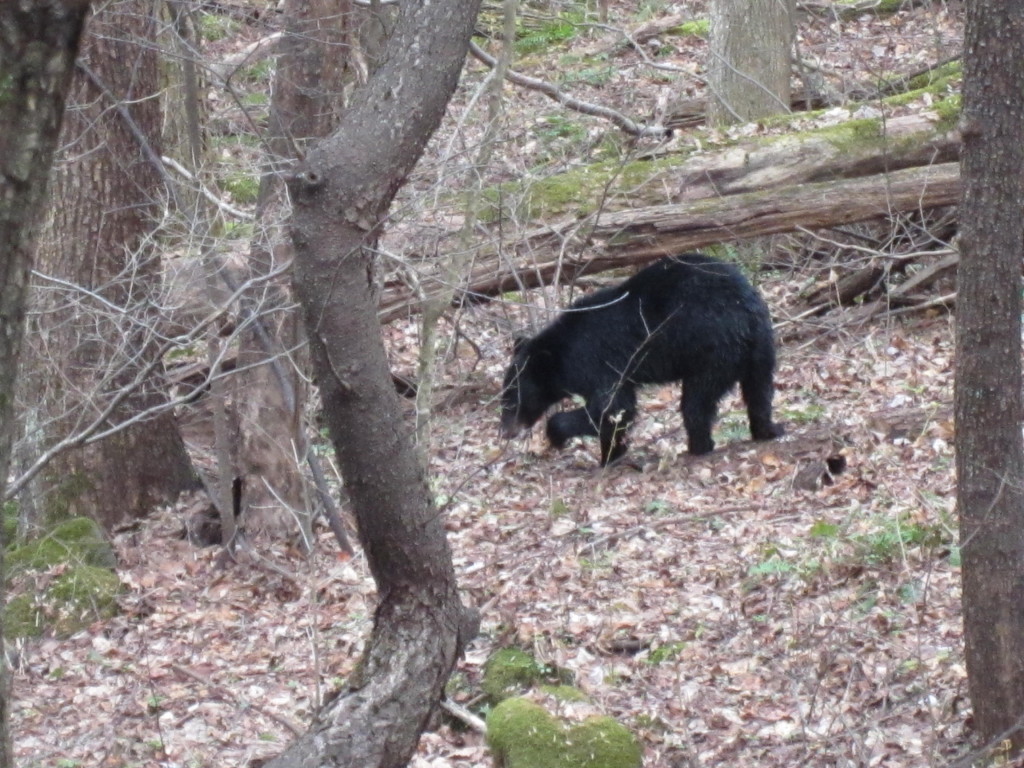 I’m really sore.  Rob is really sore. We went to the Nantahla Outdoor Center (NOC) at the end of town on our way back and were nearly talked into buying a pair of nice trekking poles for $100 smackeroos.  We declined…then as the night wore on and we drank more moonshine, we felt more and more sore.  In fact, my knees and my glutes are so sore, I could die.  I hiked up a mountain using my ass, people.  We thought about those trekking poles and debated the pros and cons, I’m not kidding, we did, even made a list like adulty people.  Finally, we ran to the NOC, arriving 3 minutes before they closed to buy a pair of trekking poles that cost as much as the dress I’m wearing to the GRAMMYs this year.

Tomorrow, we hike to Charlies Bunion, also along the AT, which boasts some of the prettiest views you can see in the park…with trekking poles.