The weekend after Snowpocalypse 2016, we had sunshiny days in the 60s, so Rob and I headed to Sparta, TN for a 9 mile round trip hike to Virgin Falls.  This is one of the state’s most visited natural areas, so I wanted to go there before it got crowded.  We had to drive two miles along one of the worst dirt roads I’ve ever been on to get to the trailhead parking lot.  There were enormous potholes and massive amounts of mud along the sides, which gave our sedan some difficulty.  A logging operation is happening on the property adjacent to the area, so the road is a nightmare.  I would definitely consider trying to go in dry weather when there hasn’t been too much rain.

The trail signs indicated the hike to the falls was 4.5 miles each way, so we brought lunch and plenty of water with us.  The scenery starts to get interesting about 1.25 miles in.  You use a cable to help cross a stream, and then begin the gradual descent into the area where several waterfalls crash into the woods.  One thing we knew about the hike going into it, you go down on the way in and up on the way out.  First small waterfall we came to was a refreshing little spot called Big Branch Falls. 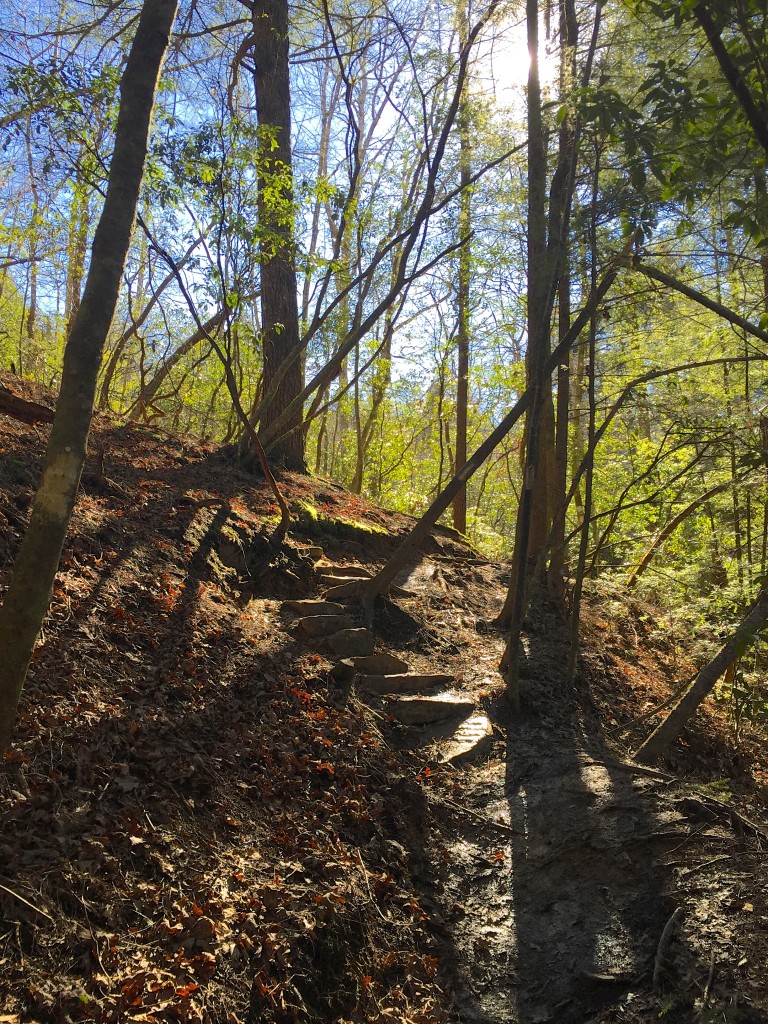 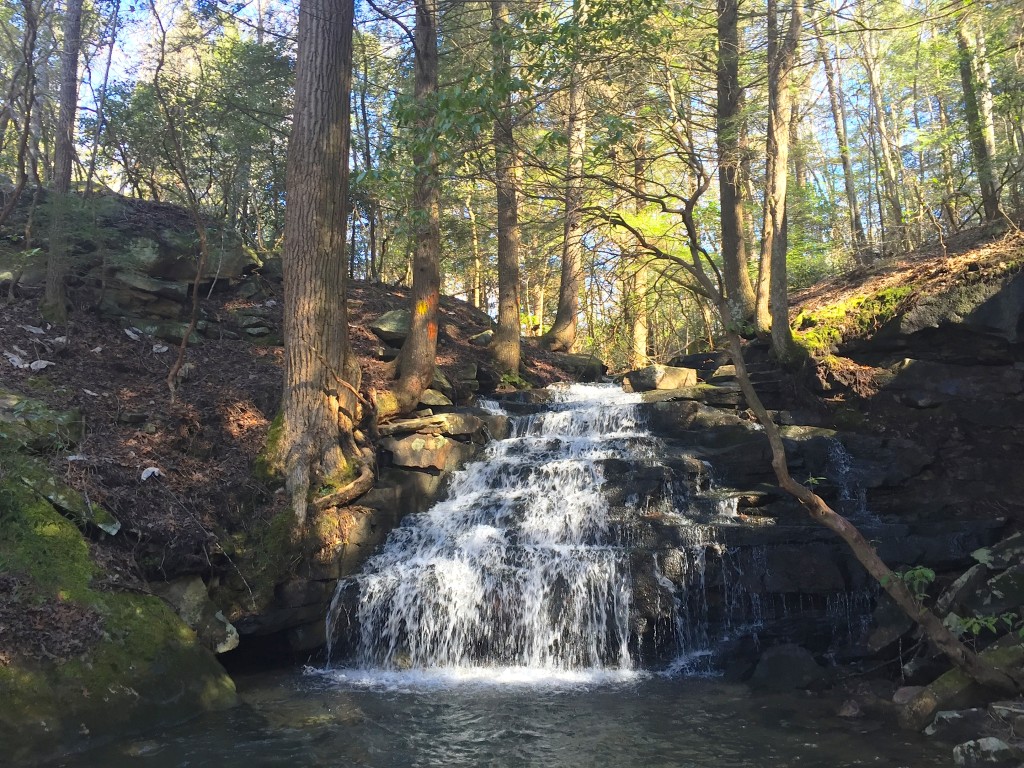 As you continue hiking down, the scenery becomes more vast and the terrain becomes more rocky.  Everything was pretty muddy, so I was thankful the trekking poles saved my from falling a few times.  The next waterfall is Big Laurel Falls, and I must admit this is my favorite of the three.  Mossy green boulders dot the forest floor leading up to the waterfall. 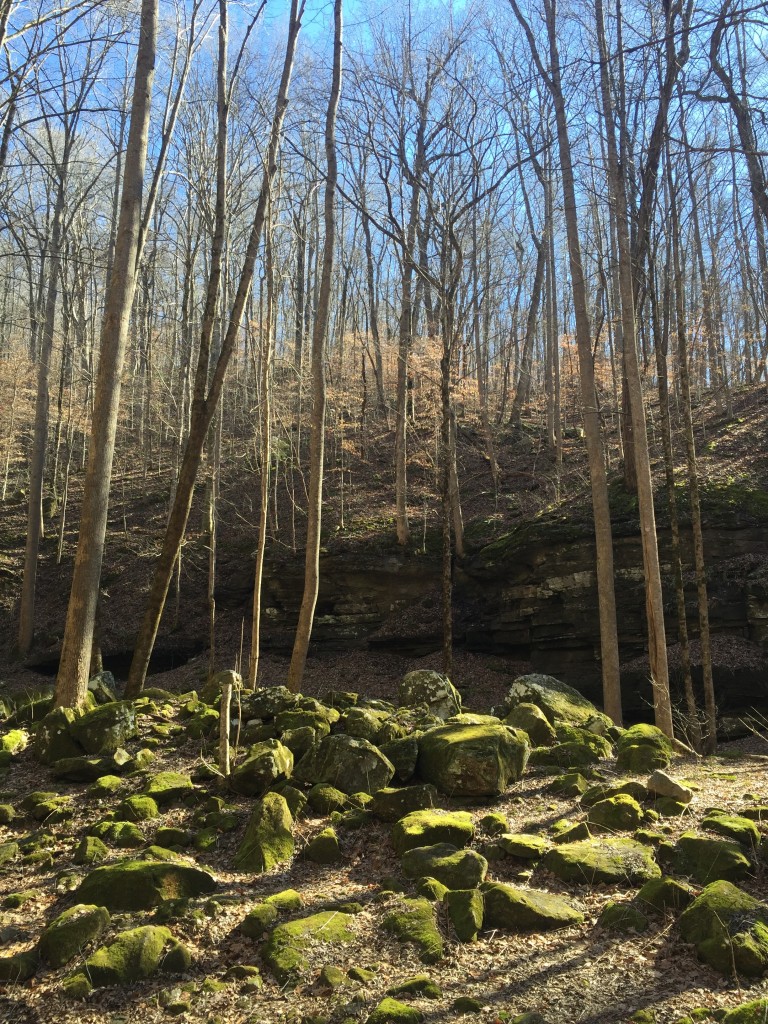 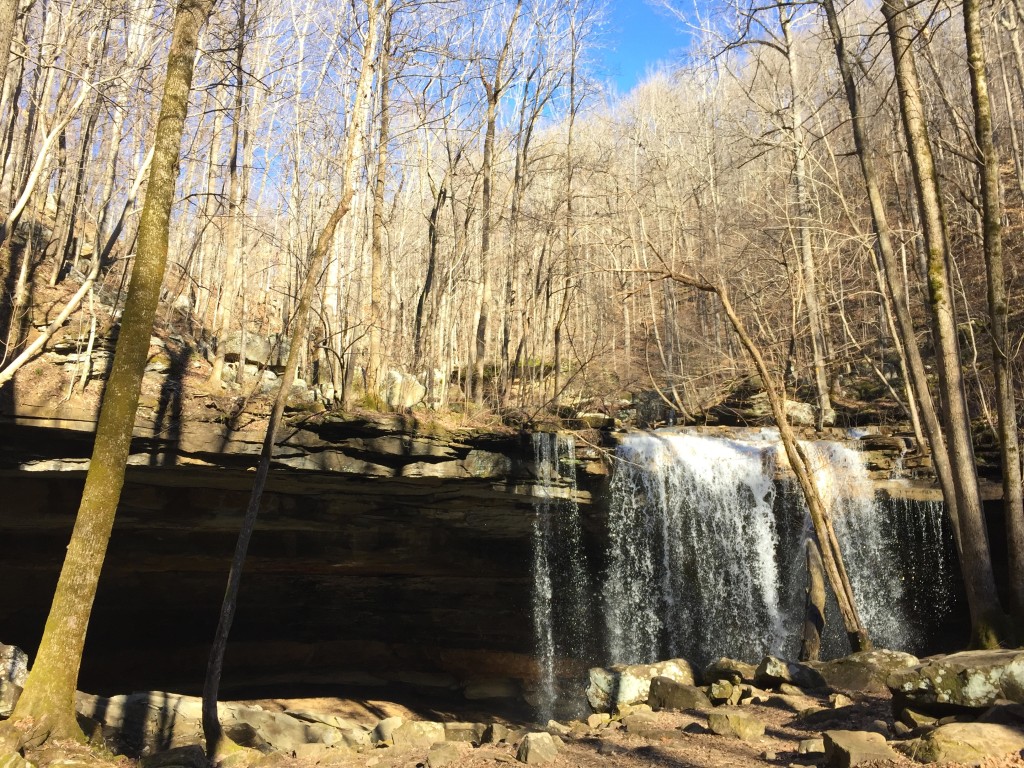 At first impression the fall itself doesn’t seem so big until you get closer and realize there is a massive cave behind it that you can walk into.  The air is musty and crisp all at the same time.  The sun was shining brightly, illuminating the mist rising from the steady stream of water.  Standing in the cave looking out, you felt like you’d entered another world. 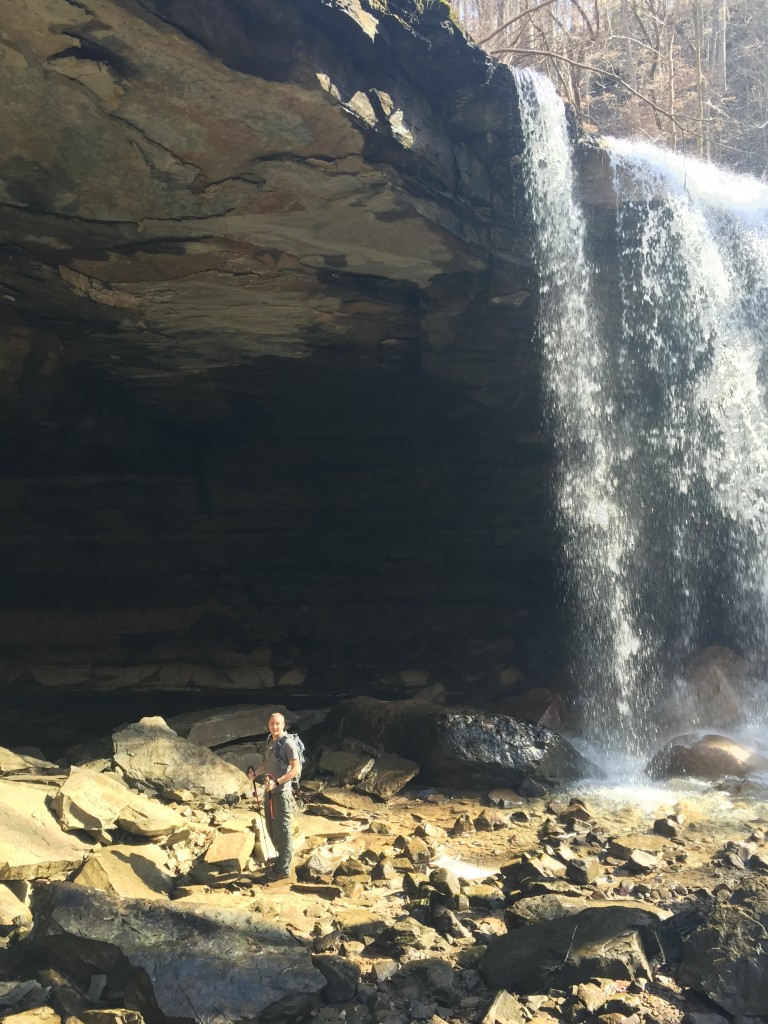 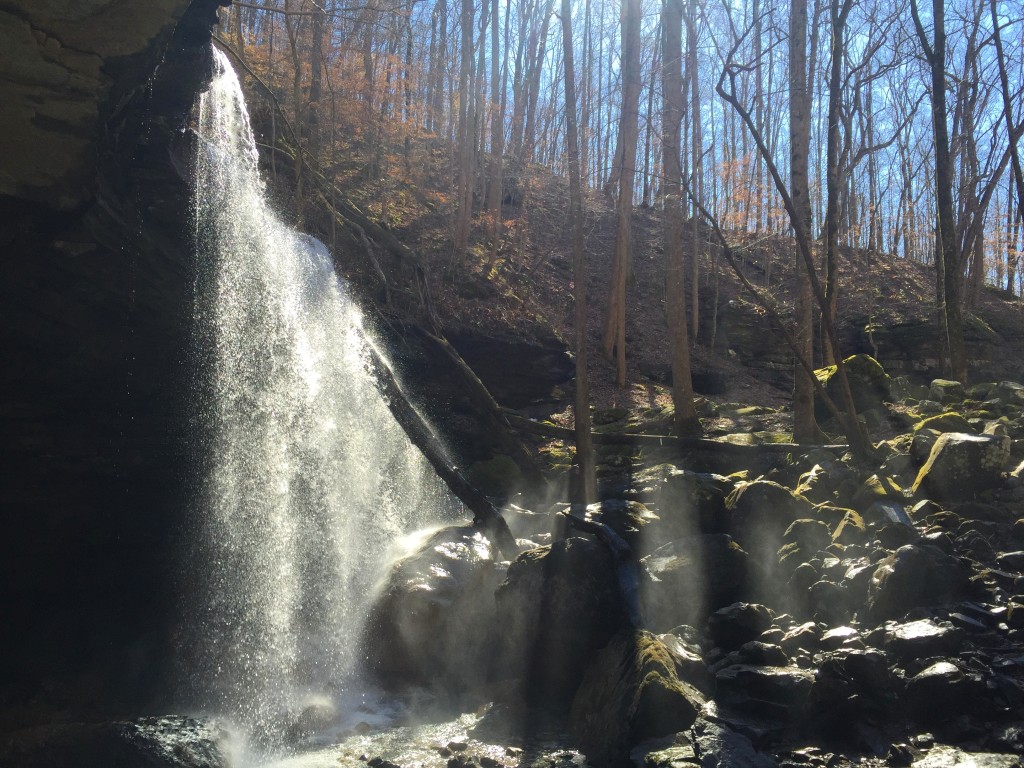 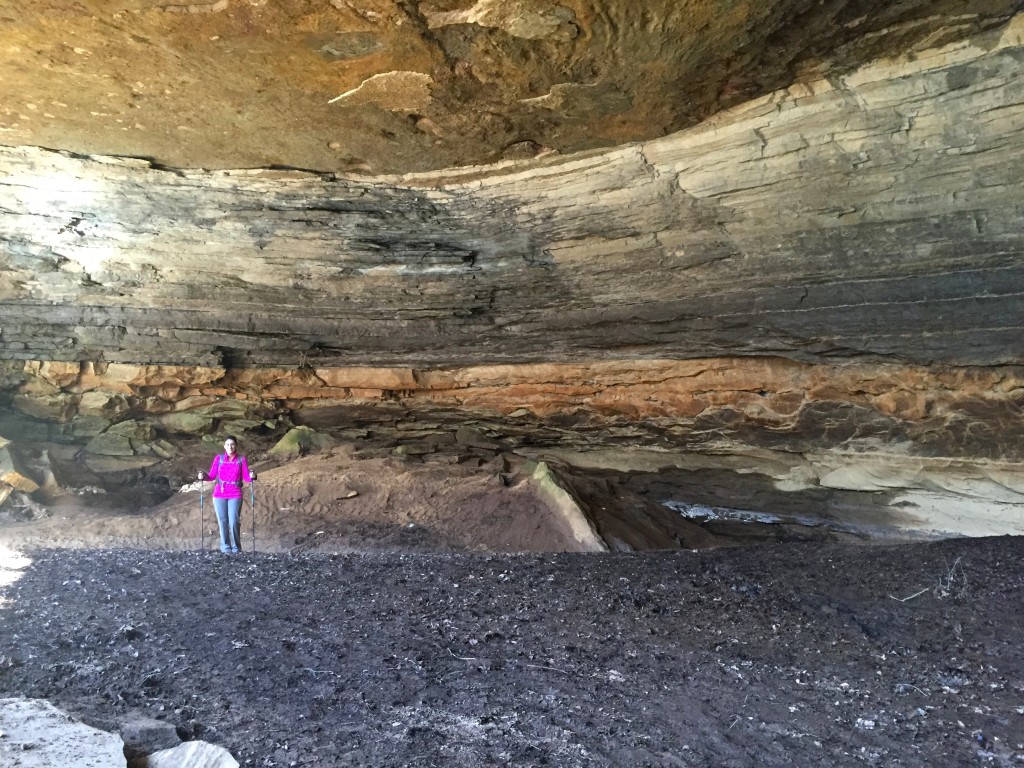 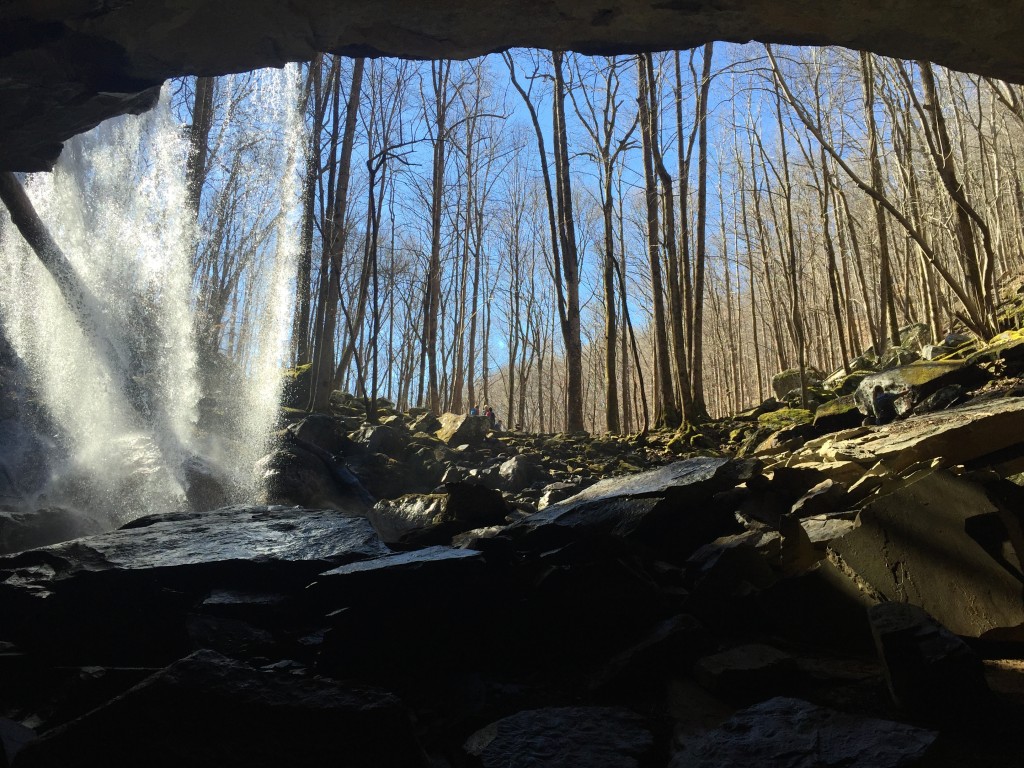 There are also some really awesome campsites right near the falls!  Most looked level with a common fire ring.  We have to come back just to sleep with that as a backdrop, although in the busy season it may be impossible to score a campsite.  The trail had some mile markers along the way which were posted to the trees, a great way to know where the heck we were.  As we came to the fork in the road leading to Sheep Cave or Virgin Falls, we headed up to Sheep Cave to check it out.  Meh…or should I say “Baa.”  We heading on to Virgin Falls and as we approached the waterfall there was a significant drop in temperature.  The cascade was roaring, absolutely huge.  In fact, one hiker said he’d never seen it looking so “formidable” in al his years of hiking there, so we went on a good day. 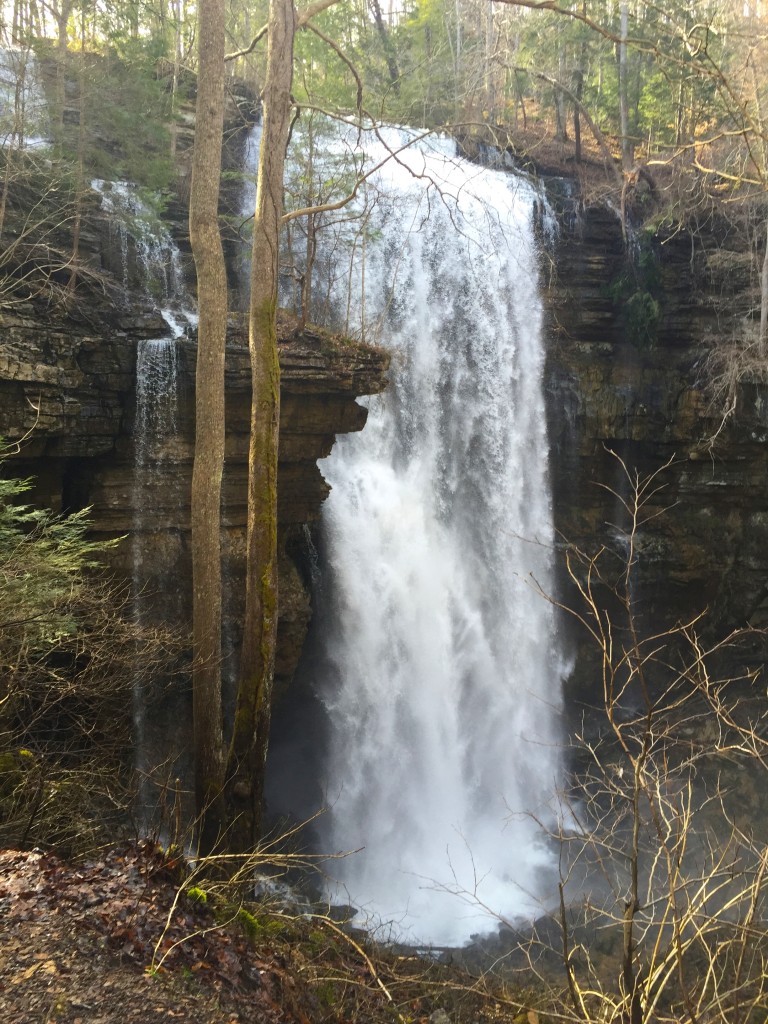 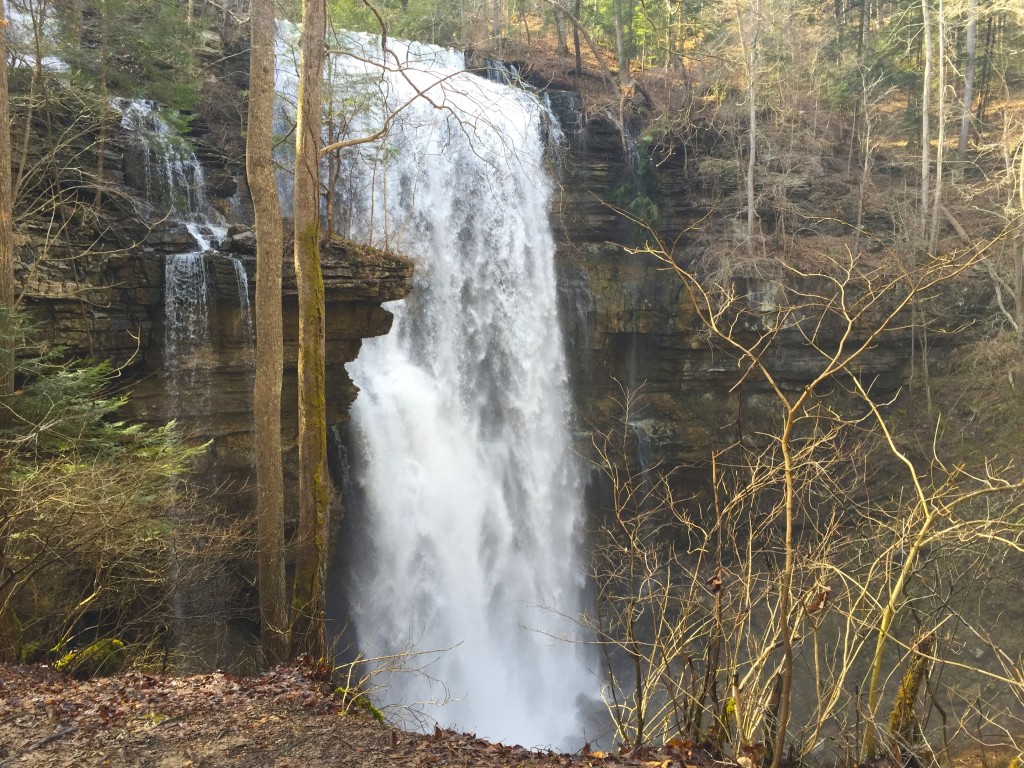 There’s a side trail which leads around the side of the waterfall up to the top so you can see its source.  We could feel the mist as we passed and see rainbows dancing through the trees. 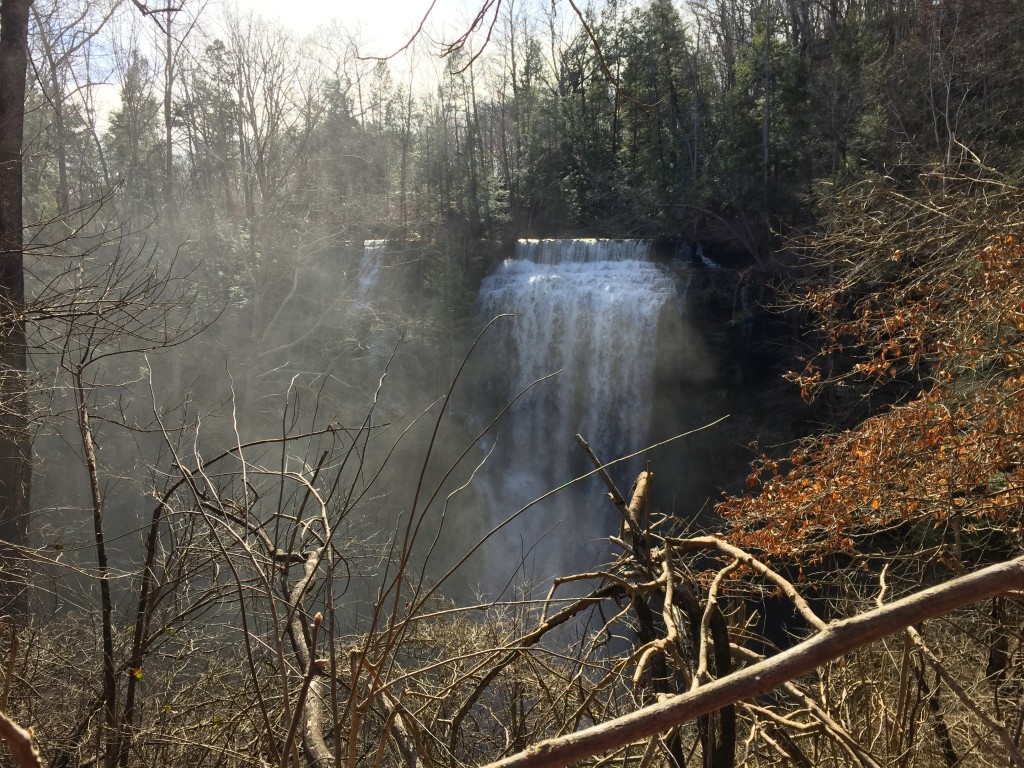 The source of all that power?  A tiny hole in the earth with unknown depths. 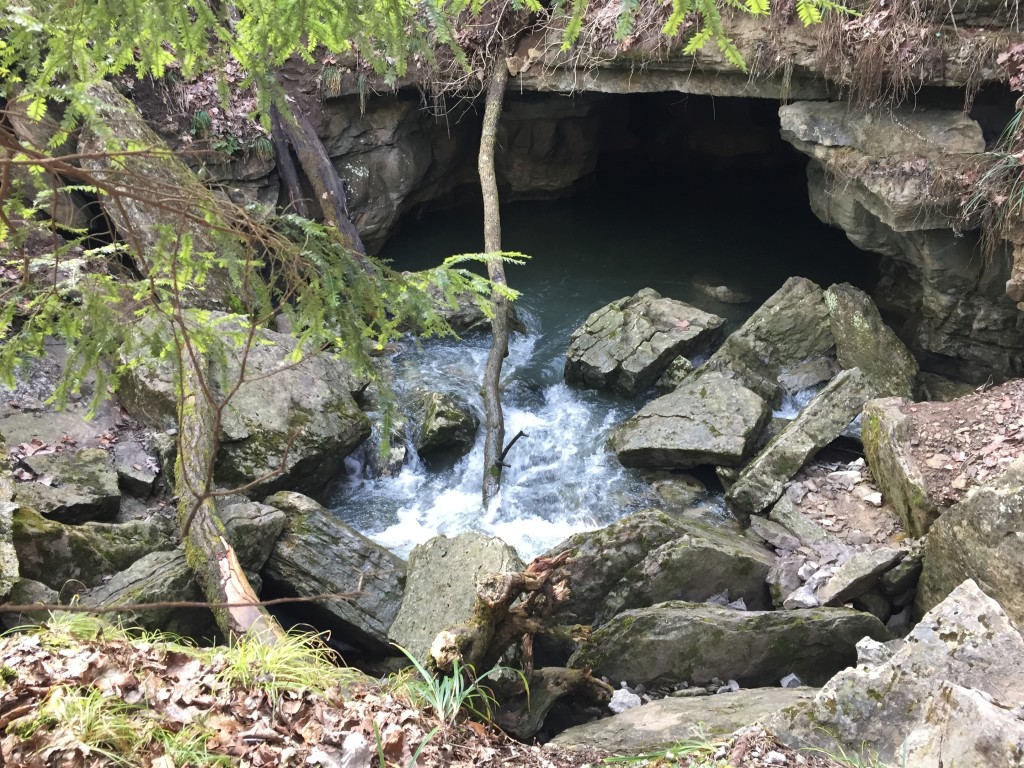 We ate some lunch, gave our knees a rest, and eventually headed back knowing that we’d have our work cut out for us.  We took another break at Big Laurel Falls and then began a 2 mile ascent over boulders and muddy roots, leaving the river behind as the light of day slowly faded. 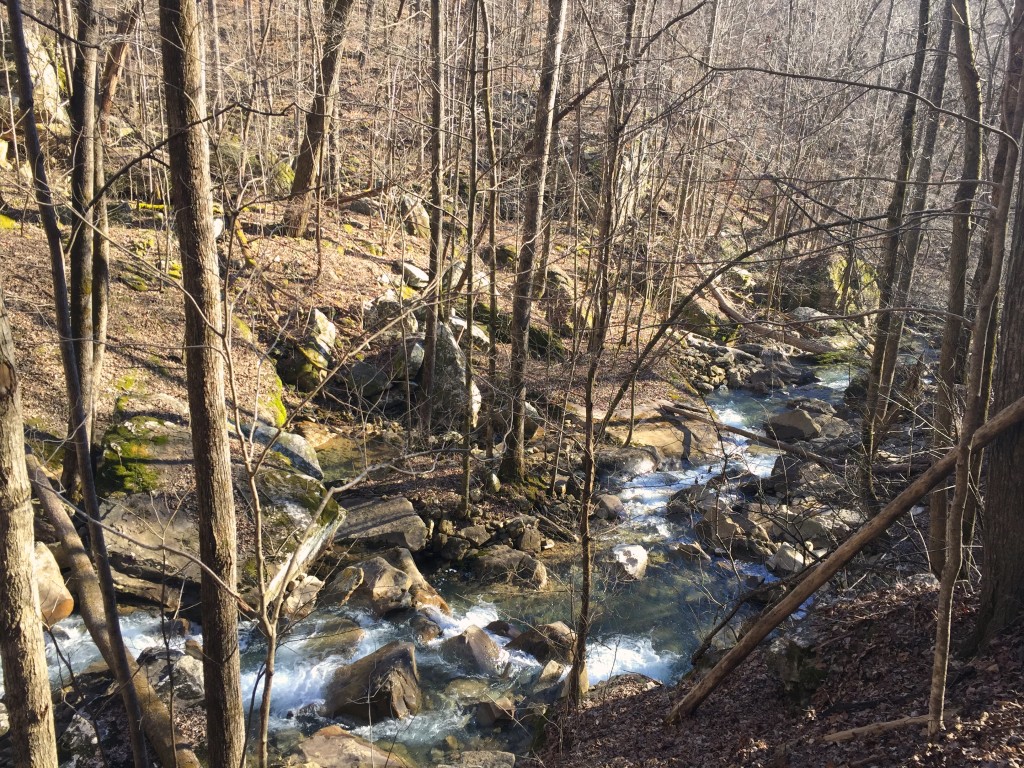 In total, we were back to our car in 5 1/2 hours.  Since this was our first big hike of the year, we were totally exhausted and the back of my left knee was killing me.  It would be really great to backpack in, camp, and then backpack out the next day, this way there’s a bit of rest in between the coming and the going.  This is a difficult trail, but well worth the effort, and such a good way to spend a quiet winter weekend!