The use of seasons as an analogy for what we experience in life is a weary one, worn out from centuries of use by humanity to describe the phases of our lives that ebb and flow.  Relationships, families, jobs, the paths we travel on all have seasons.  The most dramatic seasonal changes that I perceptibly take notice of each year are winter turning to spring and summer turning to fall.  The changes from spring to summer and fall to winter are less visually profound, so they happen unconsciously.  My wardrobe is the main indicator of the subtler seasonal changes, a t-shirt taken out of a drawer, a down coat out of a closet.  In our city/suburban lives, seasons are easily overlooked unless intentionally observed.  In nature though, seasons are as vivid as a rainbow against a dark grey sky.

I have now seen Great Smoky Mountains National Park in all seasons.  Each one is strikingly different.  There is no mistaking the icy fronds of Fraser firs in winter, the bursting forth of formerly quiet streams in spring, the vibrant blooms of flame azaleas and rhododendrons in summer, and the autumnal golds, reds, and oranges of deciduous forests in October.  Every month holds a new experience in the varied landscapes of the mountains once tread upon by pioneers and loggers who struggled to tame the land.

Yosemite is no exception.  The last time I was there, Yosemite falls looked like this. 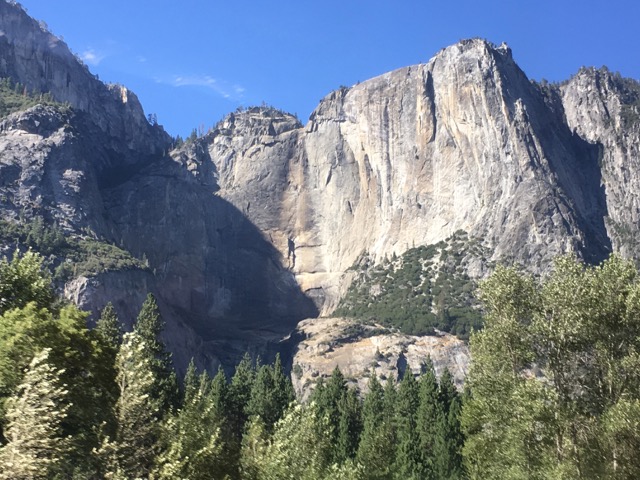 This time its form was as perfect as one could hope for, upper cascading into lower, misting the rocks at its lowest depth while continuing down streams leading to meadows. 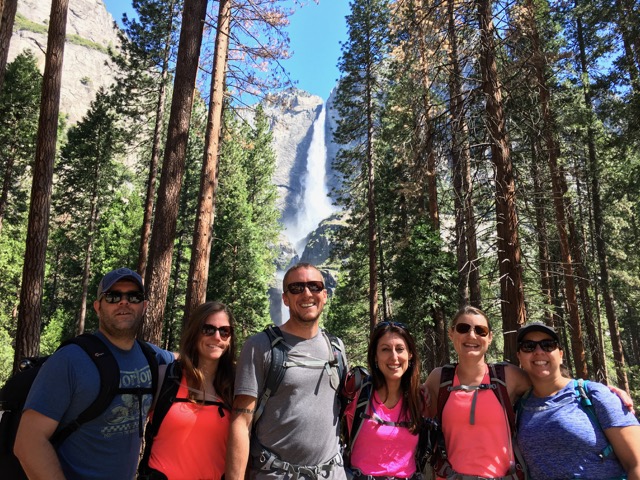 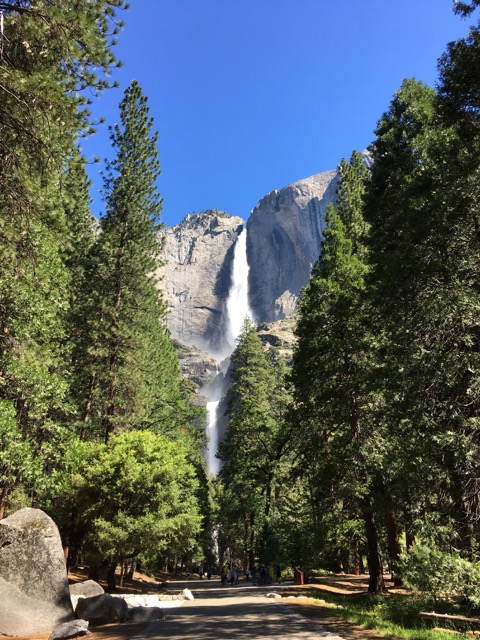 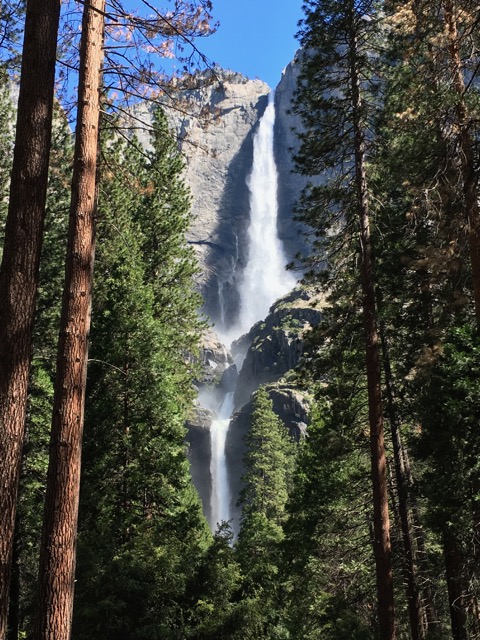 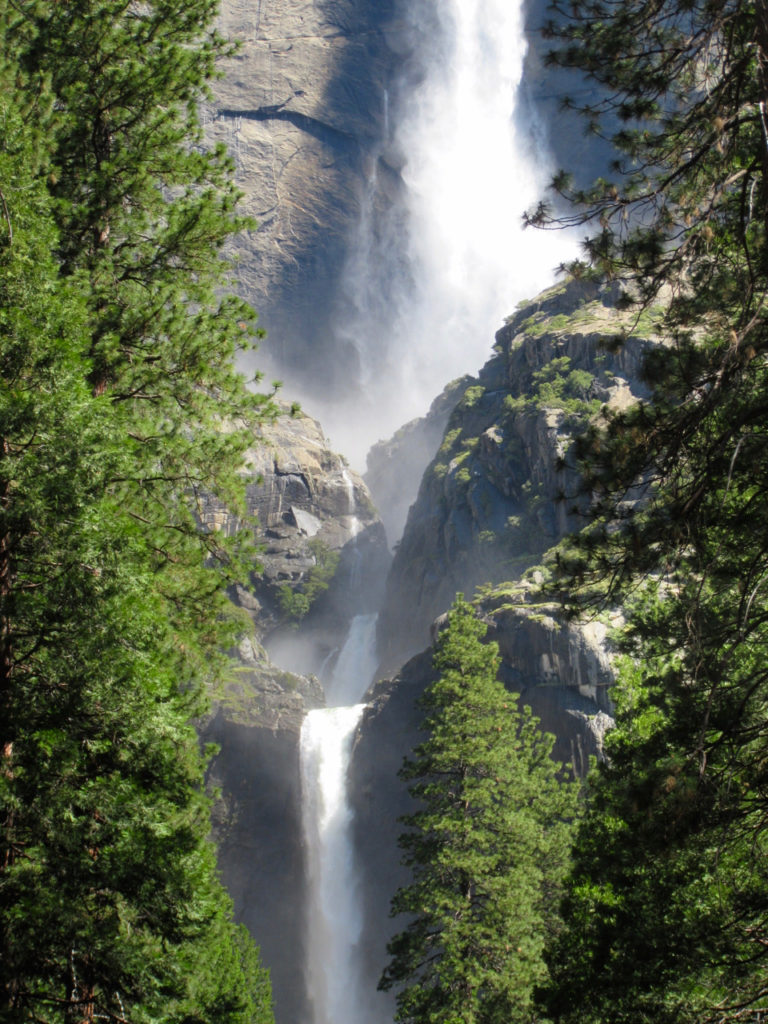 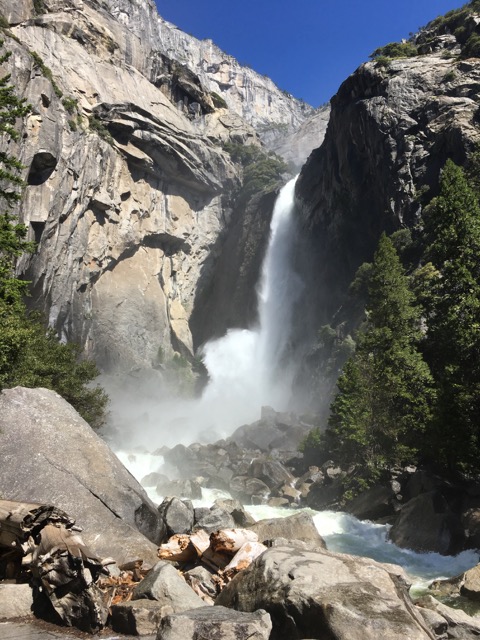 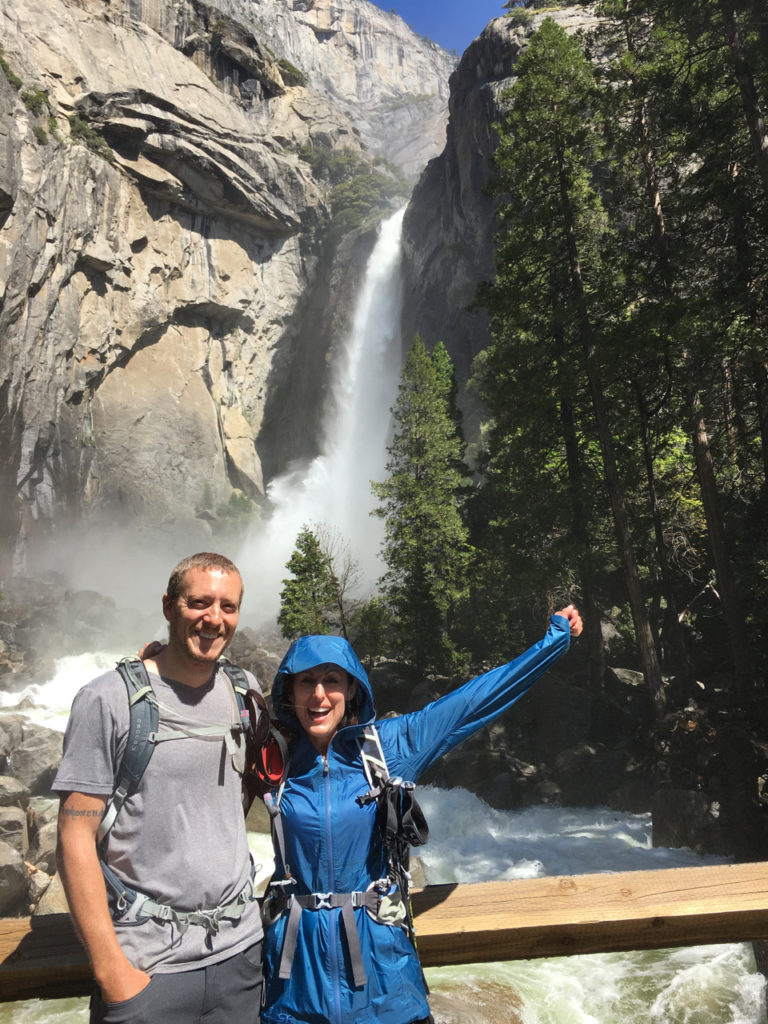 We arrived early at the falls to avoid the major crowds and then headed over to the Upper Yosemite Falls trail to Columbia Rock.  We weren’t planning to hike all the way up to upper falls, but wanted to snag some good views of the valley.  The trail begins at the edge of Camp 4 and heads up numerous switchbacks through dense forest with butterflies called California Sisters, whose host plant is the canyon live oak. 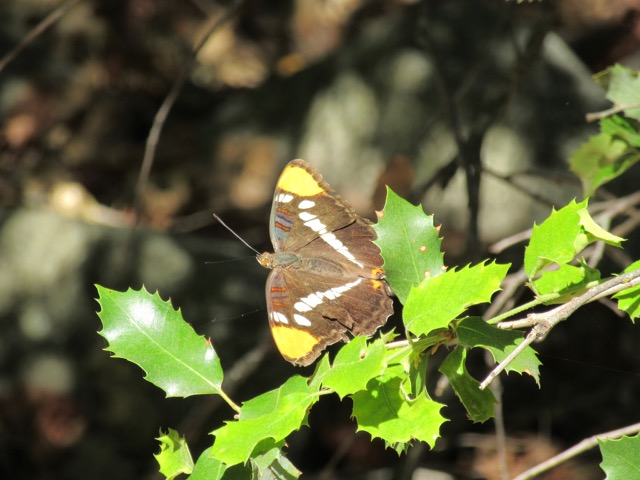 The trail is sandy and rocky, so utmost caution is required on the way down.  The higher we climbed the more the valley opened up to us. 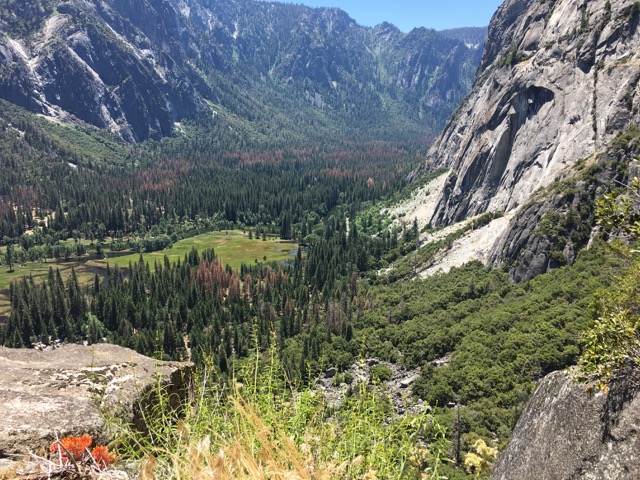 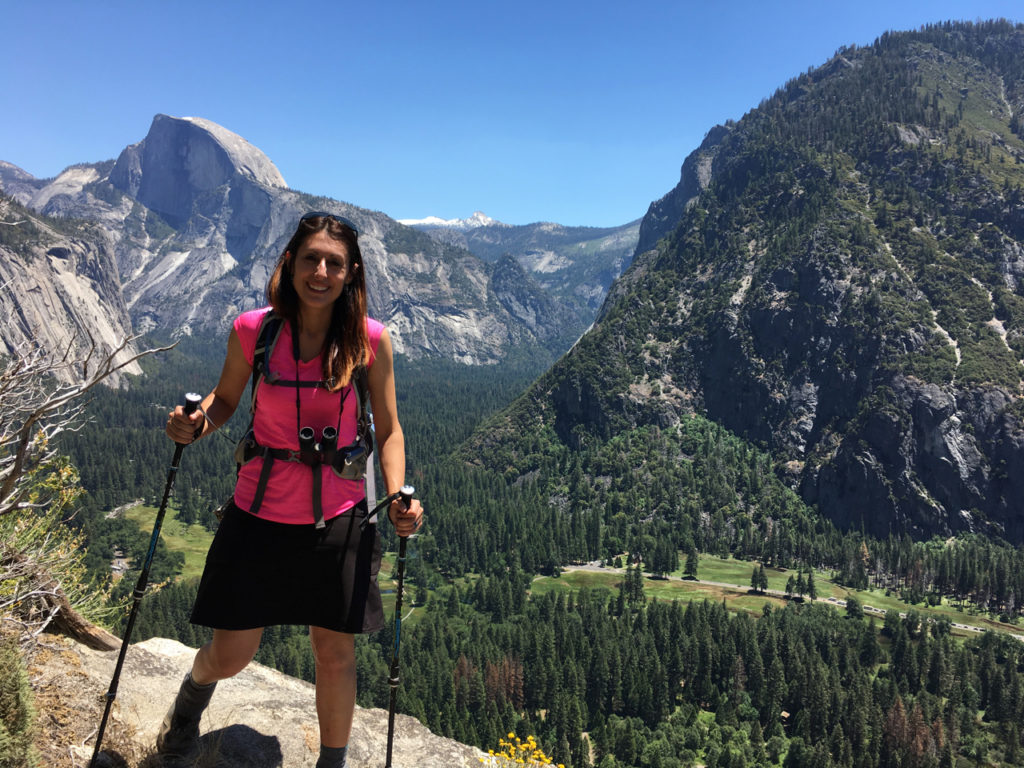 When we reached Columbia Rock, the tiny overlook area was already crowded so we headed back down to a small offshoot we’d seen just below to relax and take pictures. 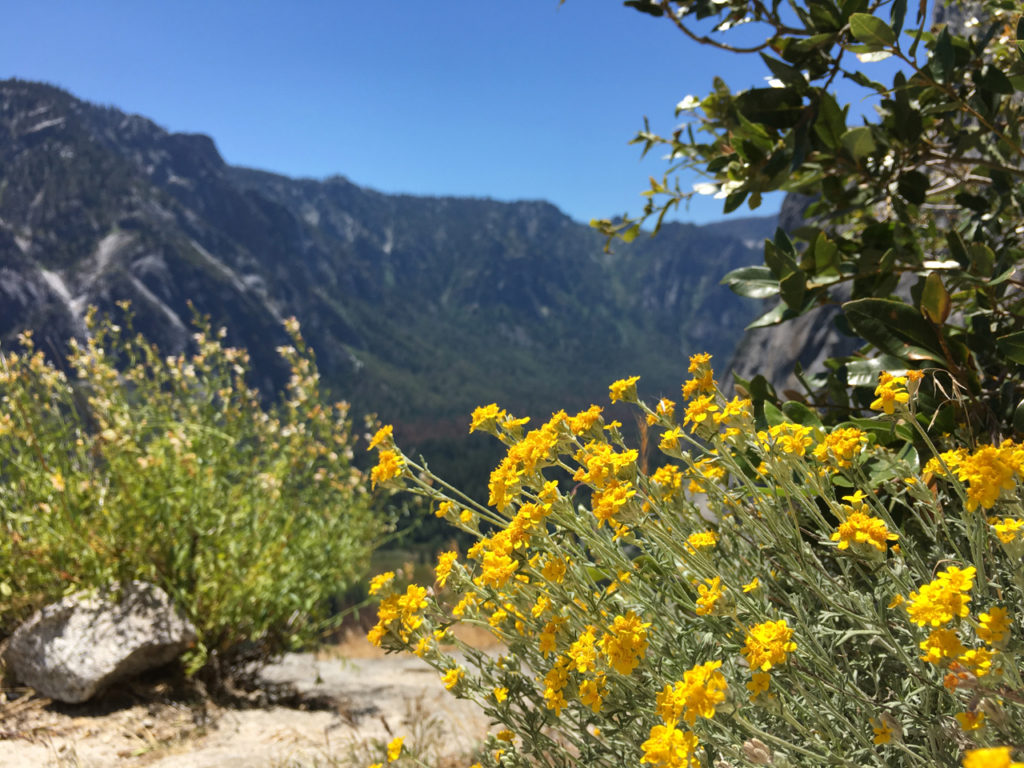 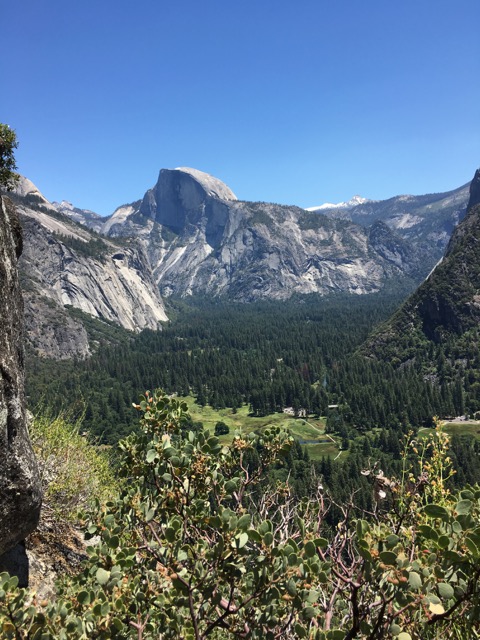 The vastness of Yosemite is difficult for the mind to grasp.  As we stood over the expanse of the valley where we slept below the pines each night, I had the same feeling as when I stand beside the water at home.  Smallness.  The fragility of humanity in perspective to the greatness of the monoliths, the power of the rivers, and the depths carved by glaciers.

I didn’t know it at the time, but we were watching falcons fly through the skies as they dove into the valley below.  My favorite picture from this whole trip is the one where I accidentally captured a falcon in flight.  We saw the birds on several occasions, some flying in pairs in perfect tandem before diving so fast that we lost sight of them as they plummeted. 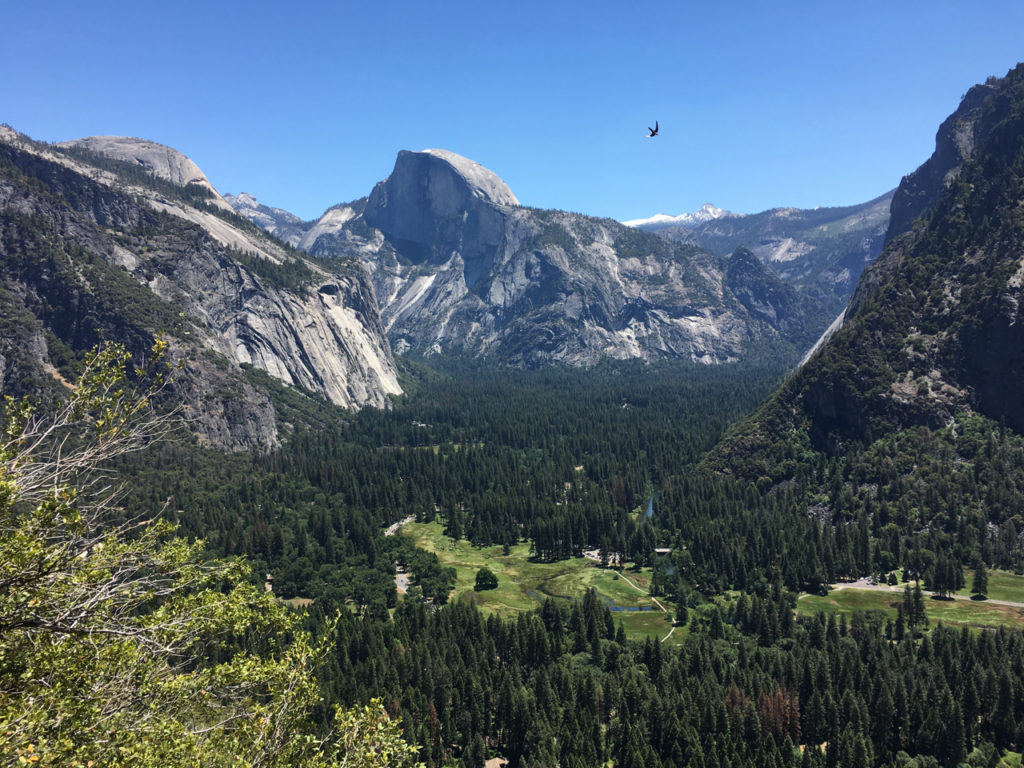 We hiked back down to Camp 4 and refilled our water.  I noticed a memorial in the shade of an immense rock called the Columbia Boulder.  When we got back home I was able to look up some information on Raffi Bedayn.  What an incredible person.  Another hidden treasure we never might have seen if we hadn’t needed water. 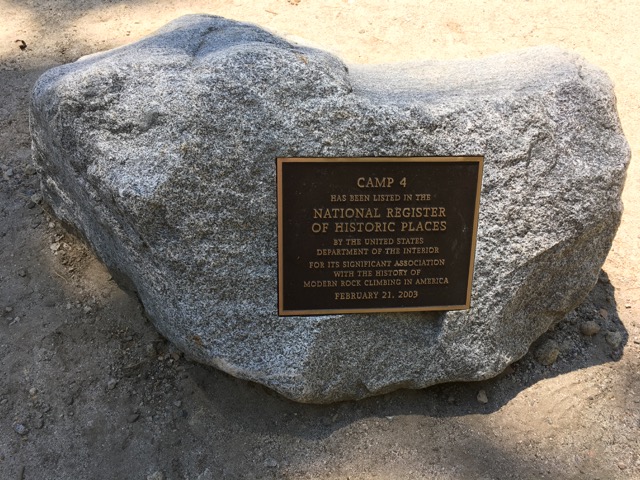 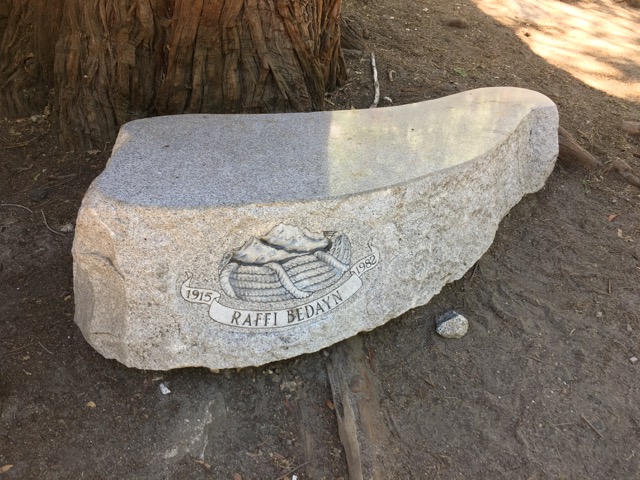 We headed back to lower Yosemite Falls for some misty refreshment and to soak our aching feet in the icy stream at the bottom. 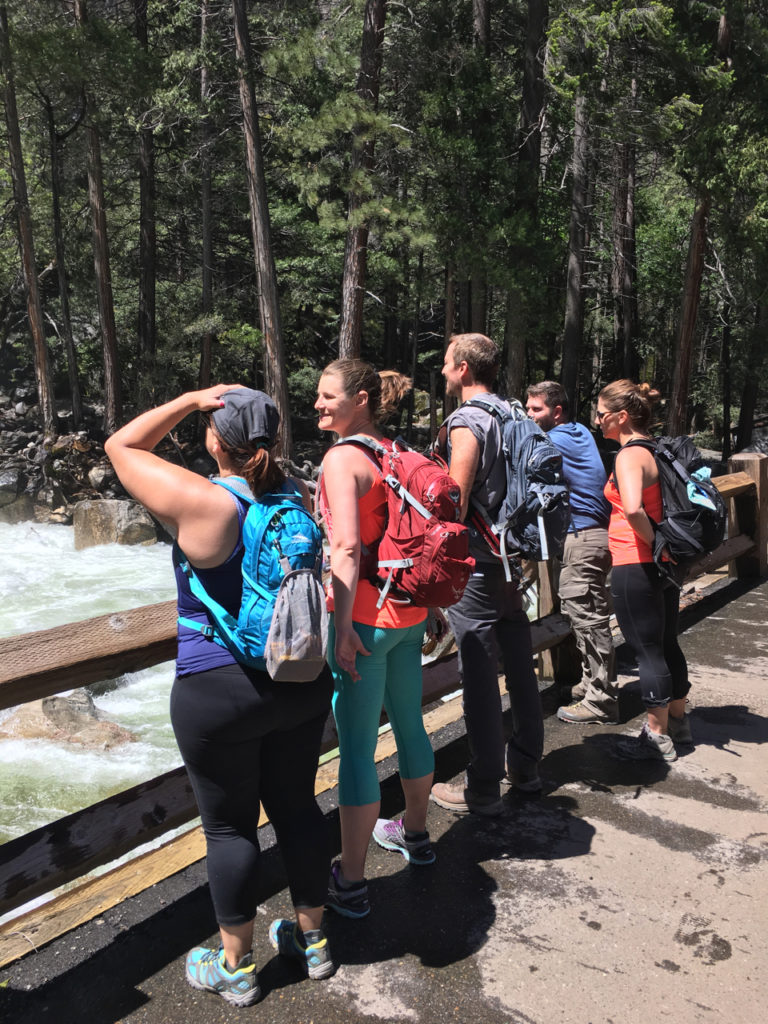 After feeling somewhat revived Alicia, Rob, and I decided we wanted to keep hiking, so we headed up to Sentinel Dome.  On the way there we passed Tunnel View just as the sun was playing color games at the base of Bridalveil Fall. 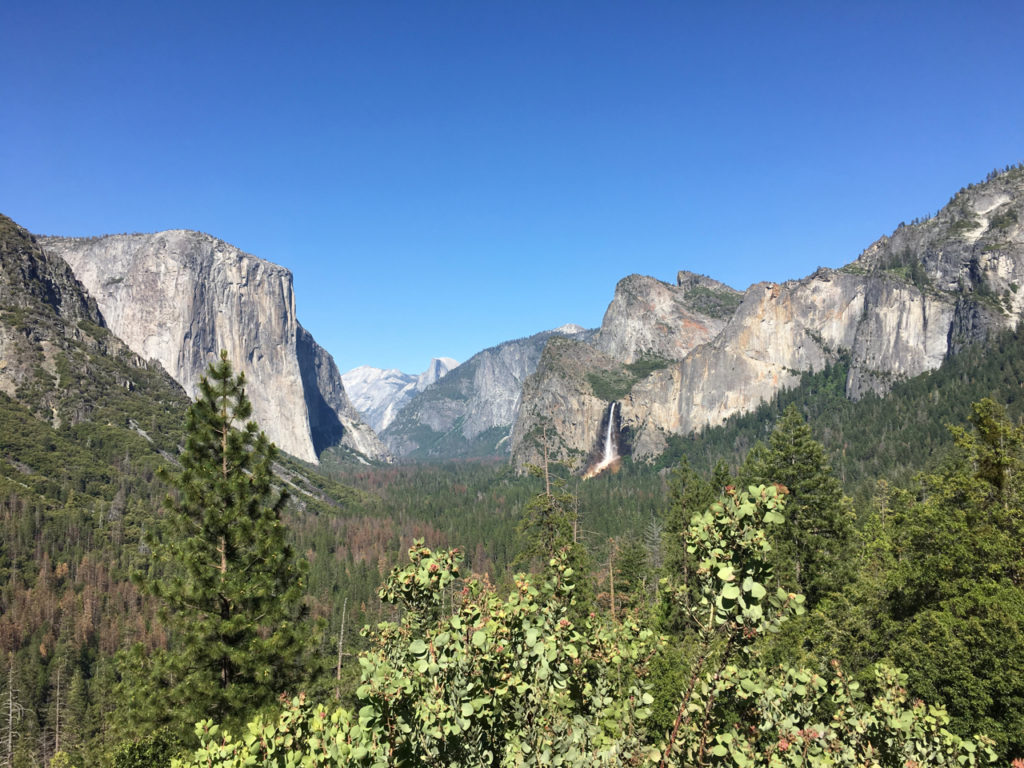 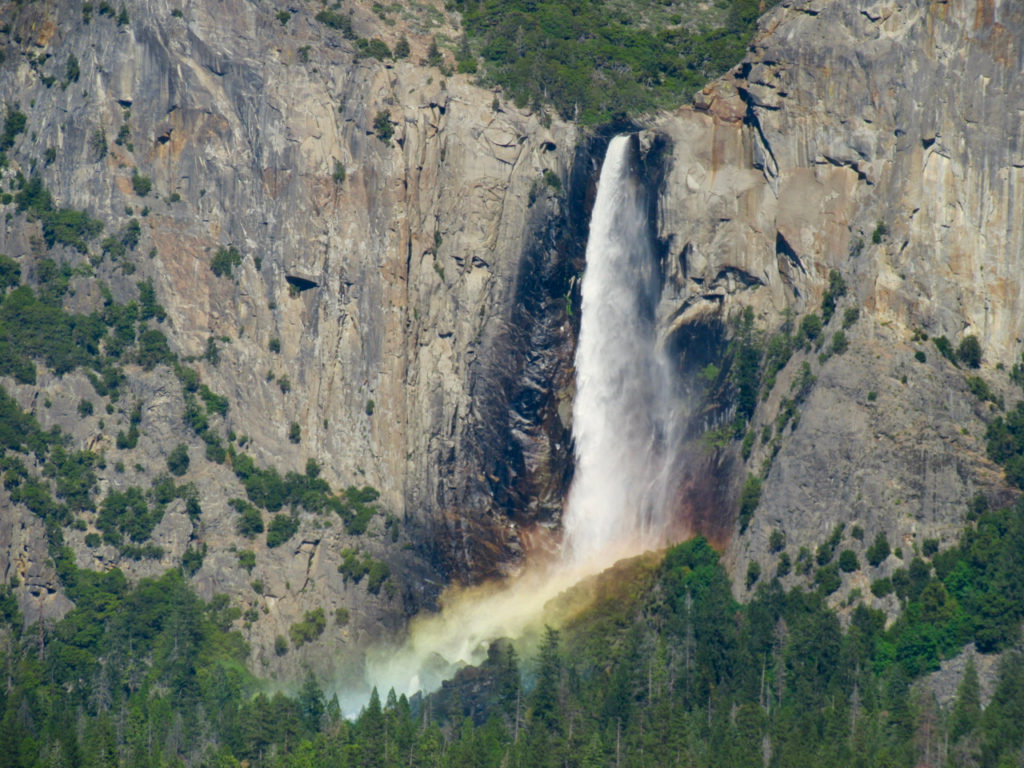 Sentinel Done was a destination for Alicia and I back in September, but we missed a turn-off in the trail coming from Glacier Point, so we never actually reached the dome and walked way past it.  This was a redemption hike for us, and I’m so glad we did the extra couple of miles.  The trail to Sentinel Dome is unimpressive, sandy, boring…about the most exciting thing to see are the tiny lizards darting over sun-warmed rocks.  When we walked up to the back of the dome, again the signage was nonexistent so we weren’t quite sure how to proceed.  To the right, you cross a road and keep going around the side of the dome till you eventually come to a place where you can climb up to the top.  While this was a steep climb, it was by no means treacherous.  There was still snow up there, but the rock was dry and we easily made it to the top. 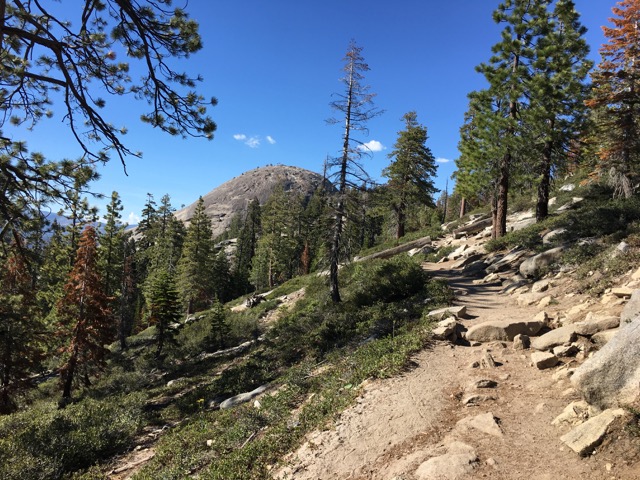 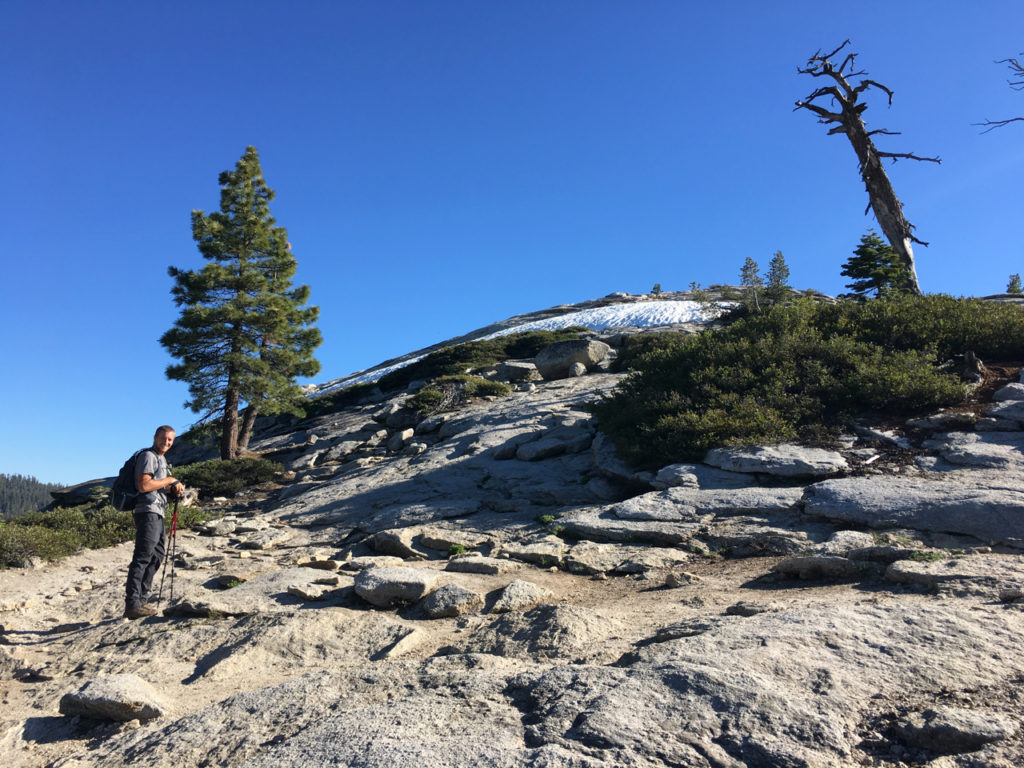 When we crested the dome, I stood there in shock and eventually cried because the scope of breathtaking beauty that exists on top of that oddly shaped rock is something I want to remember forever.  Half Dome’s side faces Sentinel, the snow covered Sierras provide a grand backdrop, Yosemite Falls is on display in full view, and El Capitan looms in the distance on the other side.  It’s the most majestic 360 degree view anyone could hope for. 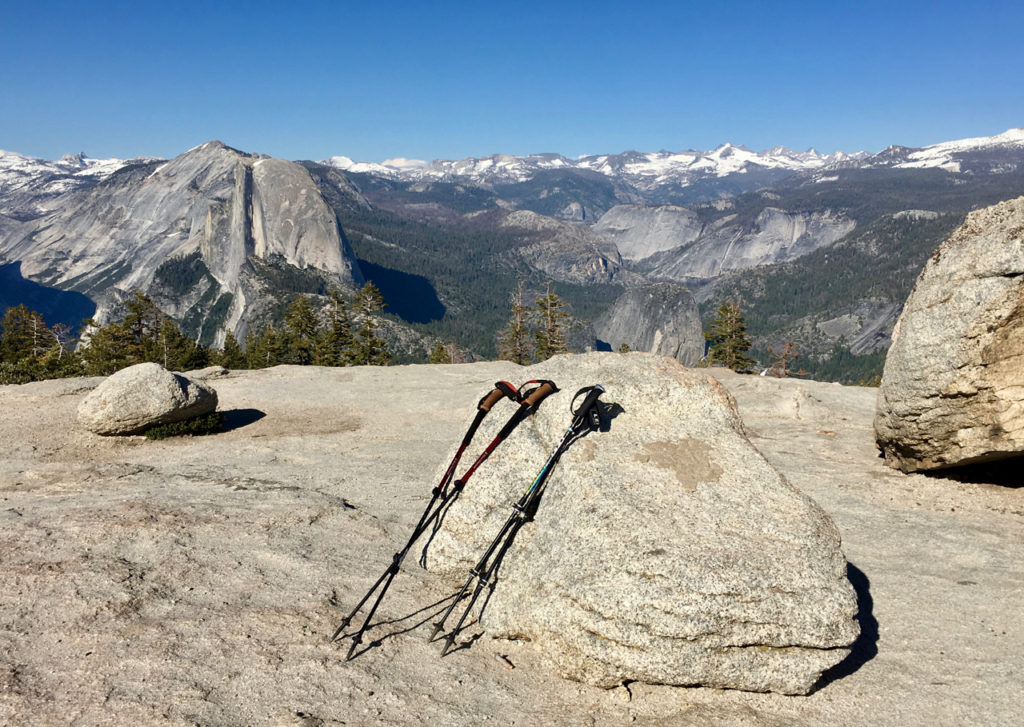 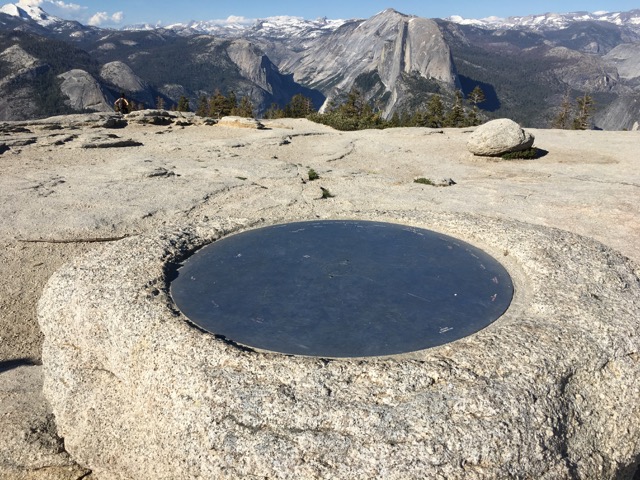 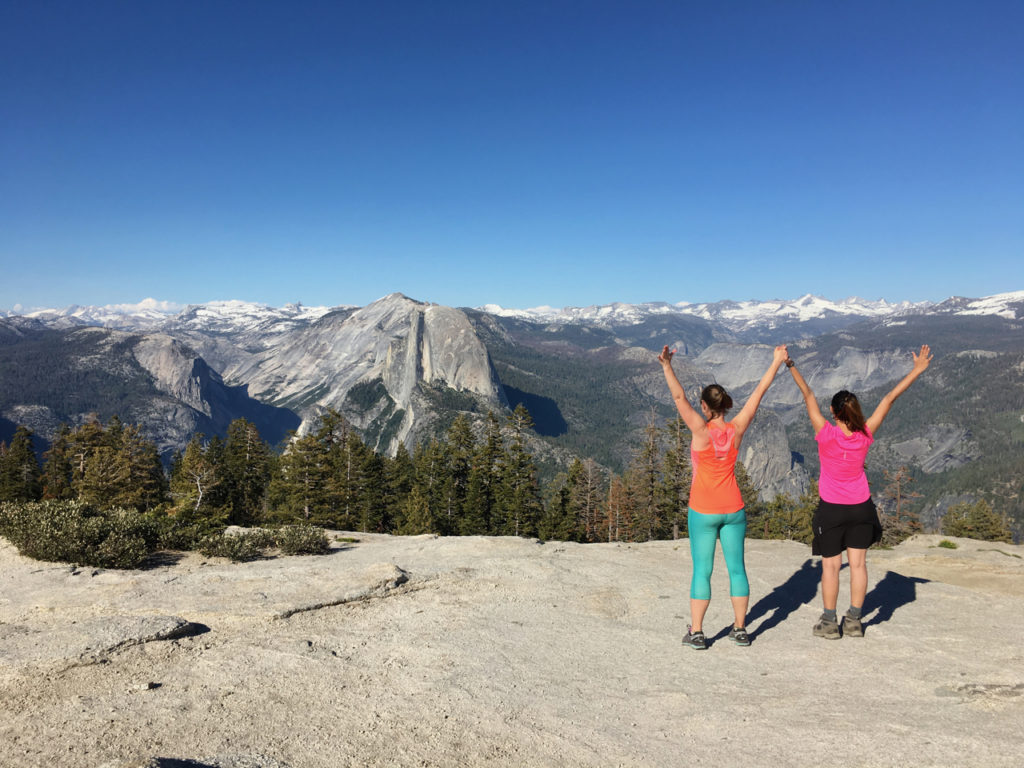 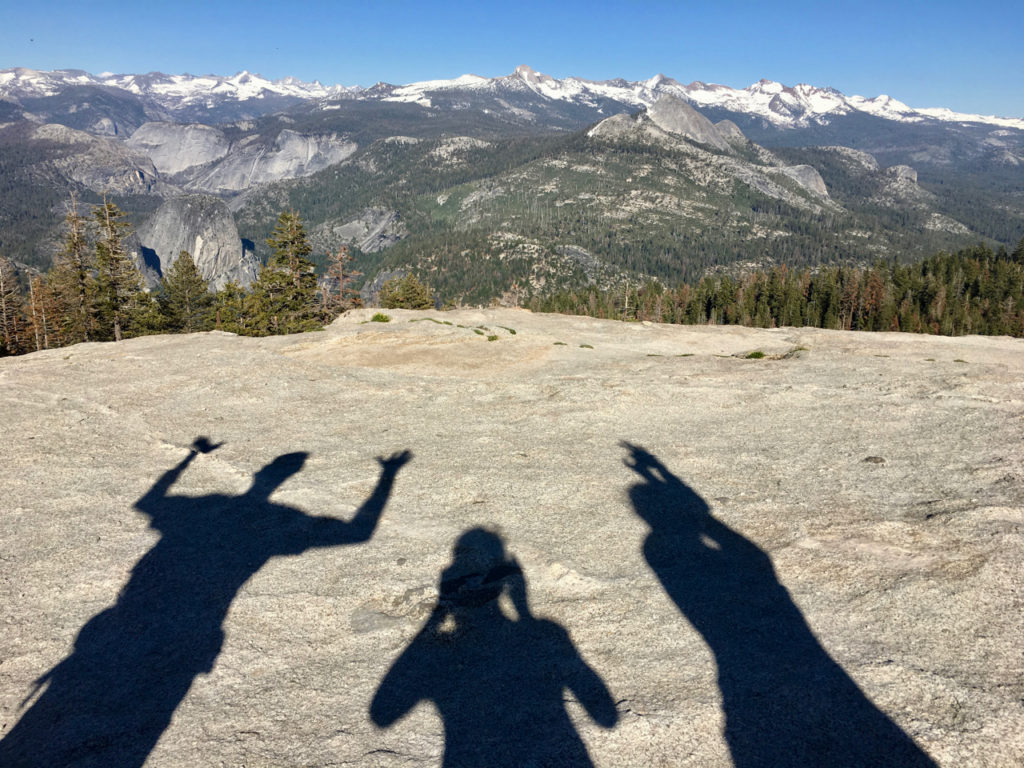 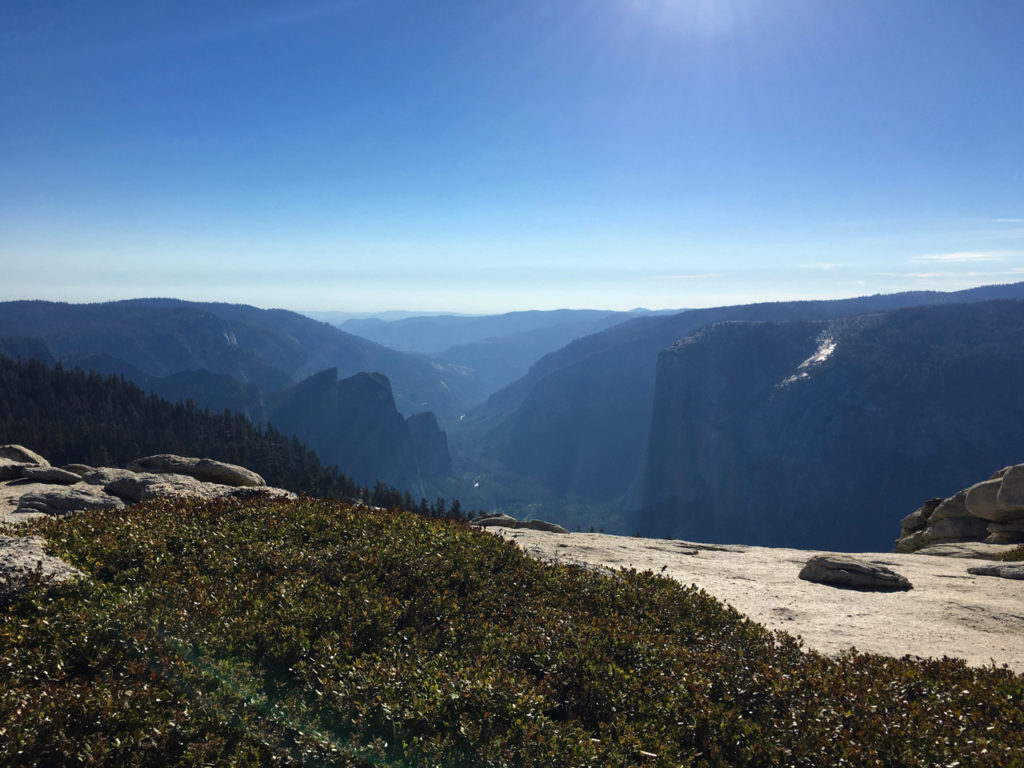 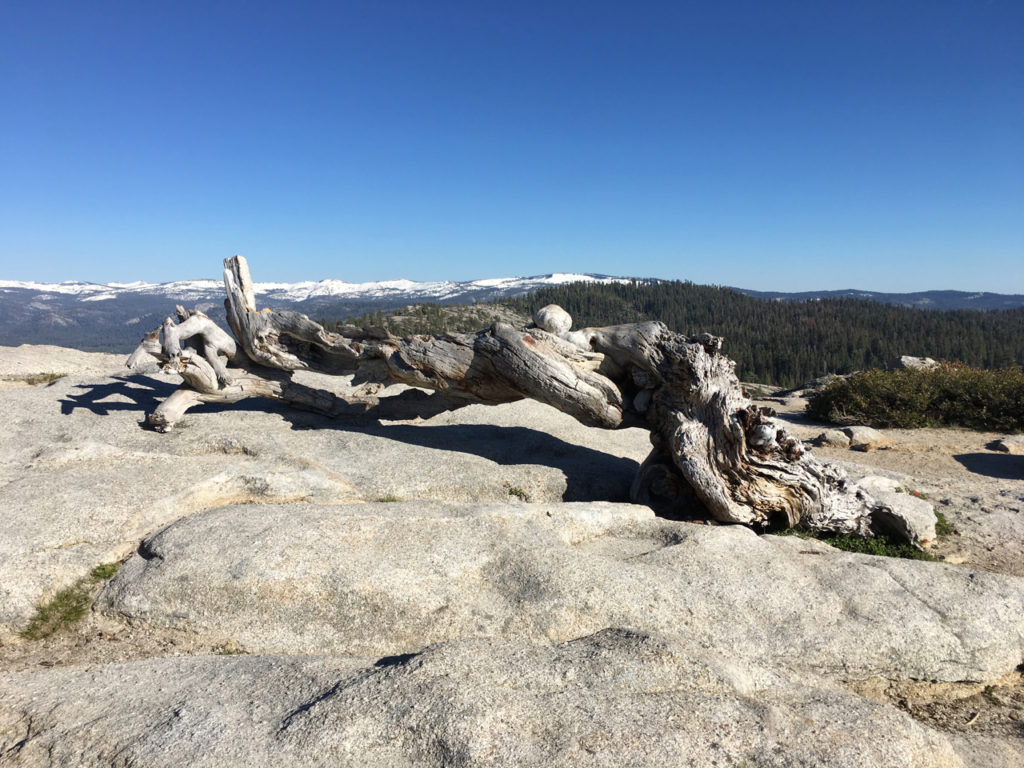 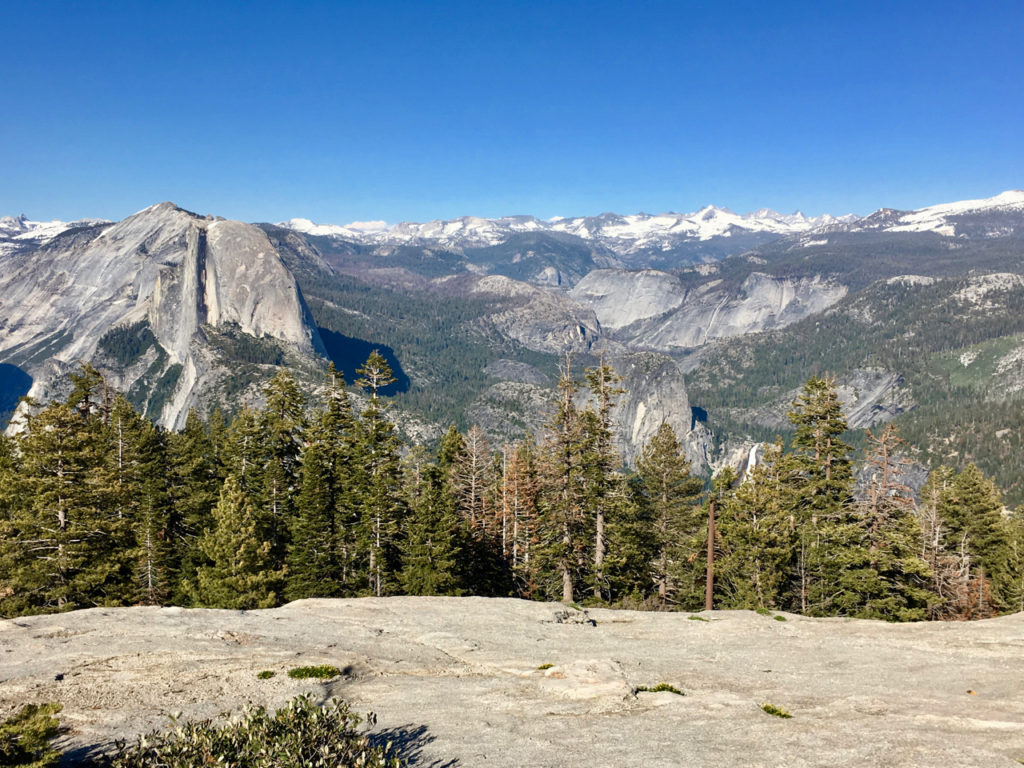 Heading back on Glacier Point Road we passed a traffic jam because there was a huge black bear in a meadow right near the tree line.  This is a terrible picture because I zoomed in a lot and he was moving around, but he was my first brown black bear! 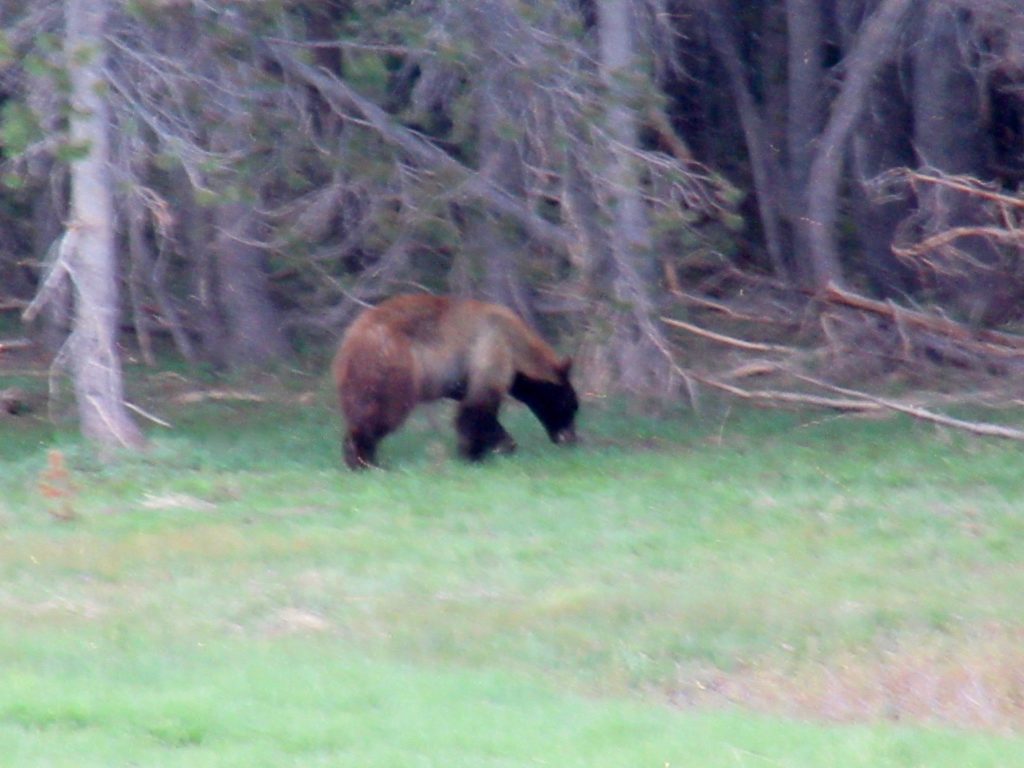 Half Dome bids us good day and good night… 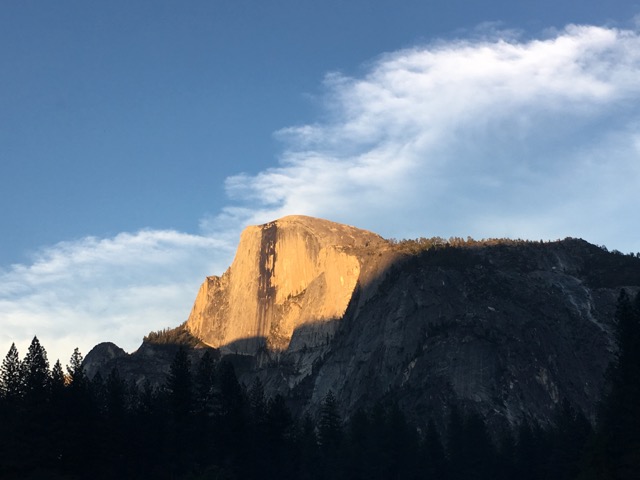