Well guys, today was a total washout…literally. Last night there were insane crazy thunderstorms that sounded like we were gonna fall into the sea. Forget “angels bowling” thunder. This was more like “angels are ticked off” tropical storm thunder. So we woke up to gray skies, but no rain where we were. We got to the harbor, got on the dolphin/whale watching boat, and it started to pour. So before we even left the
harbor, everyone on the boat was huddled under the half of the boat that was covered. At the harbor there was trash and garbage floating everywhere, and yes, it looked like people live in these houses. 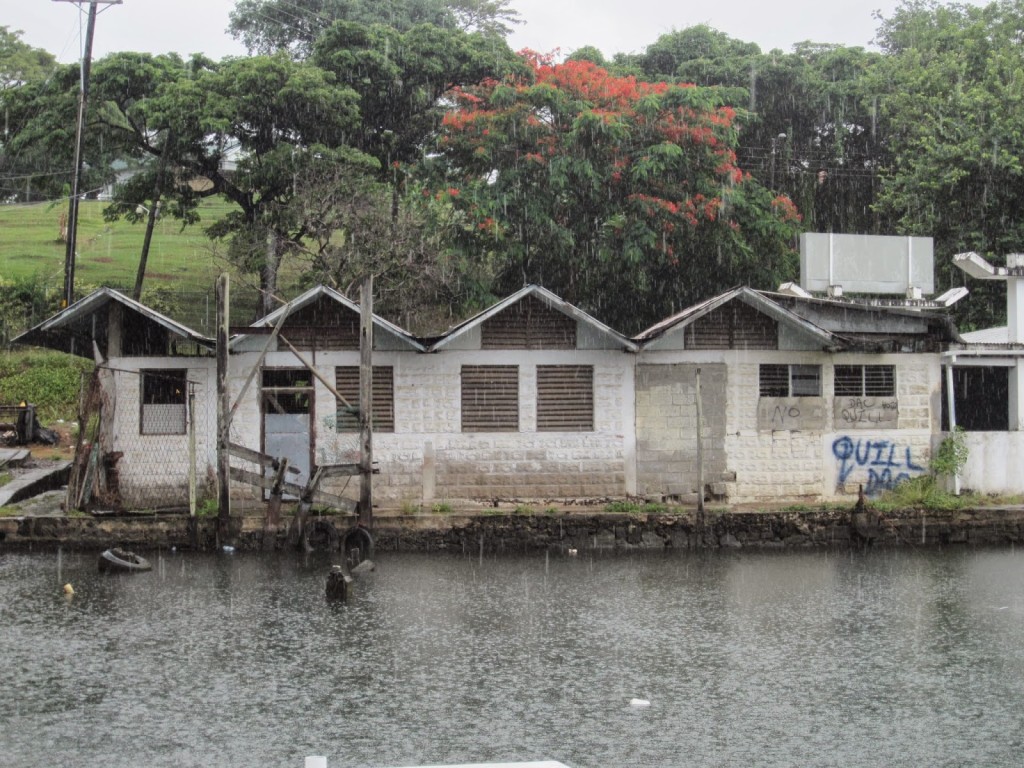 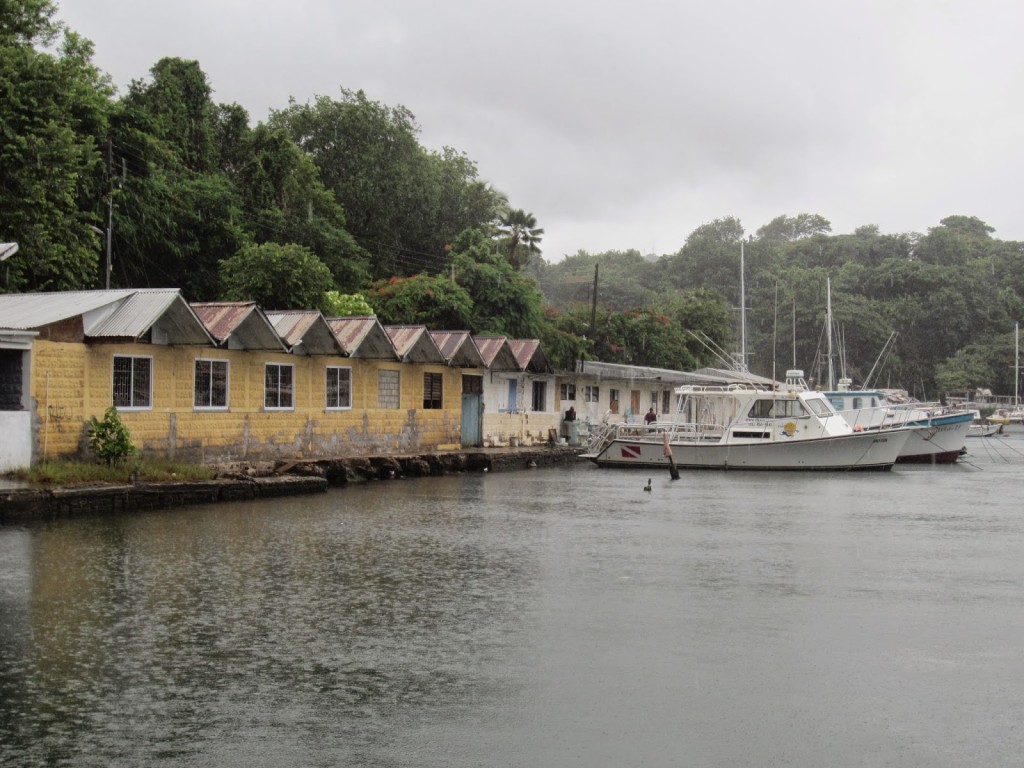 One thing we’ve sadly noticed here is that there is garbage everywhere. It’s very disconcerting. For an island that claims to be extremely concerned with the environment, that message hasn’t quite sunk in. There is trash all over the harbors, trash along every roadside, trash in fields, trash in the rain forest, trash EVERYWHERE. Our boat took us 3-4 miles out to sea today and there was trash floating all over the ocean. My heart was breaking. You know how you always hear people talking about how evil plastic bottles are???  Well, plastic bottles are floating all over the ocean and lining the roads of St. Lucia. I can’t stand to see that kind of disregard for nature. It also appears that the bathrooms on the boats plunge waste into the sea. Don’t swallow when you swimmin’, Mon!!

Ok, so the boat ride took us about 3-4 miles out to sea and down the same side of the island we were on yesterday. Except we could see some major storms brewing on the horizon and, holy crap, we ended up right in the center of one. No joke. We were in the middle of the sea, couldn’t see more than 20 feet, maybe less, on either side of the boat, gale force winds, streaming sheets of rain, crazy waves, all of us holding onto whatever we could grab….here I’m thinking WE’RE ALL GONNA DIE, OH MY GOD, WHAT THE HELL WERE THEY THINKING TAKING US OUT IN THIS?!?!?!? And Rob’s all like, “Well, they don’t seem too concerned, we’ll be fine.” I kept thinking of the story of that couple in Florida whose boat sank like 2 months ago and they floated in the sea for 2 days before being rescued…and I’m like, ok, no prob, I can float in this water…how hard can it be to float to shore, right? What direction was it in again? 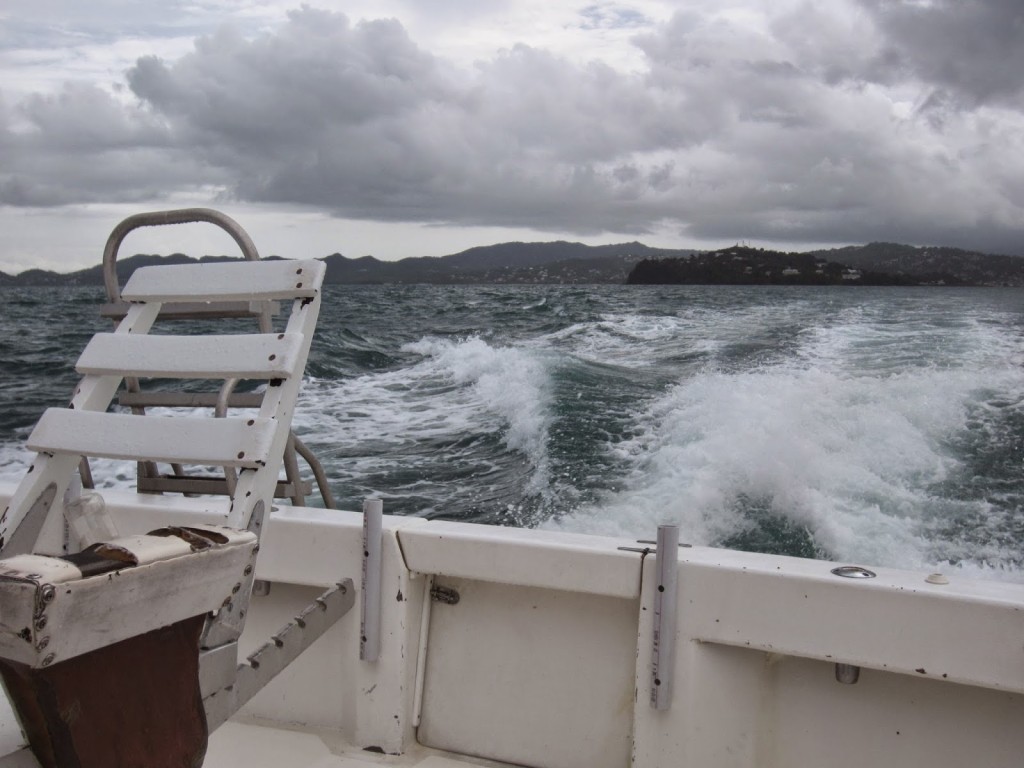 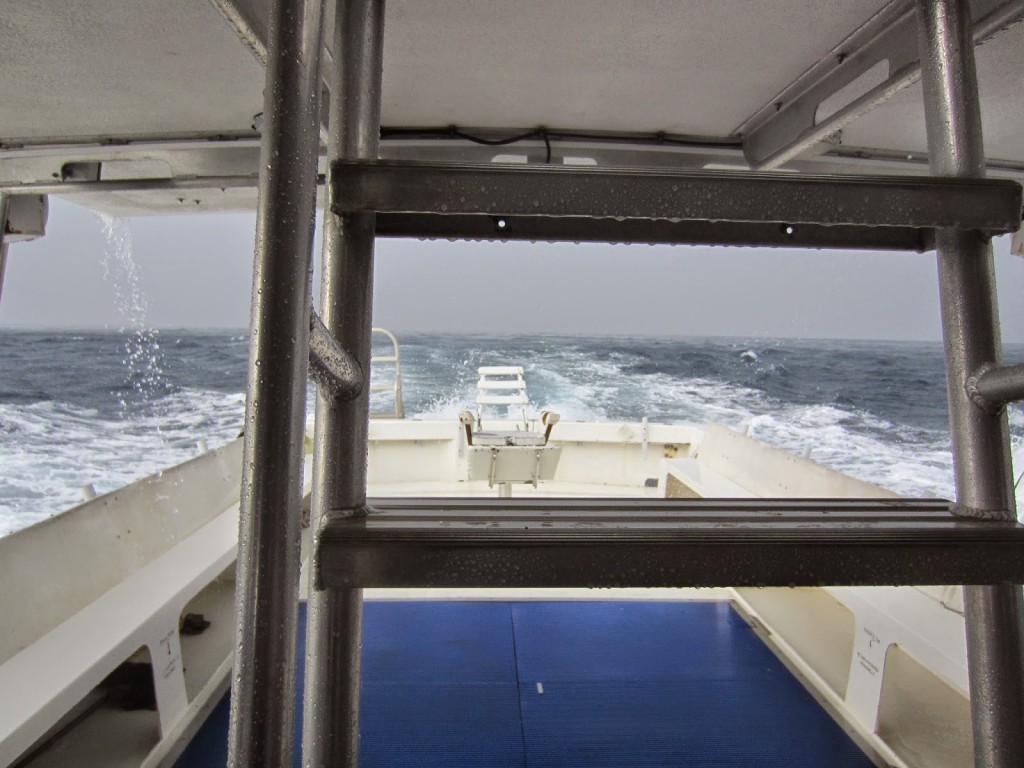 So anyway, we finally got out of the storm into calmer rain, but higher waves…see, a tiny wave in the middle of the ocean feels rather large…and eventually I look out and see a fin and I’m pointing and Rob’s like, what I can’t see anything, and other people are starting to see. It was a small pod of about 4-5 dolphins. Rob was never able to see them, but I kept an eye on them until they faded out of sight, which was pretty fast. We were told they are grampus dolphins who are very unfriendly and don’t interact with humans much at all. The other types of dolphins on the island usually put on a good show. However, we didn’t see any of those. We saw tons more flying fish, which are seriously the coolest things ever. We’d come up on a school and all of them would go flying in different directions. I couldn’t get a picture of them
because they are like the Jack in a Box of the sea, you never know when they’re going to jump up and then go away pretty fast. They are truly beautiful though, watching them glide over the waves like birds. 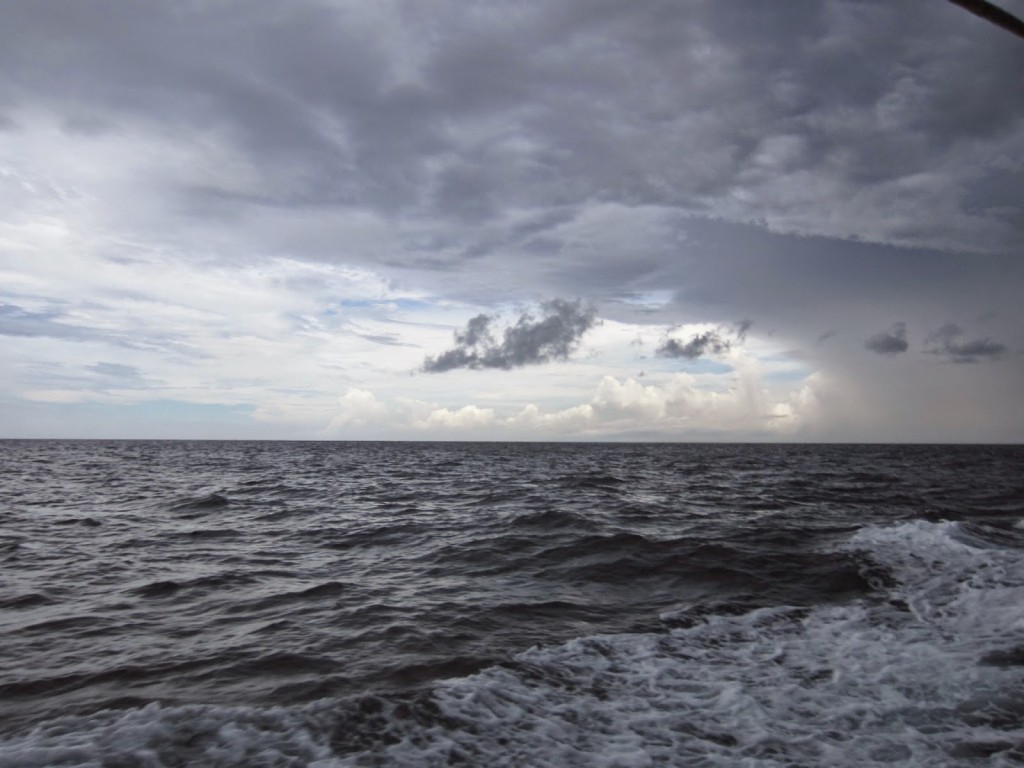 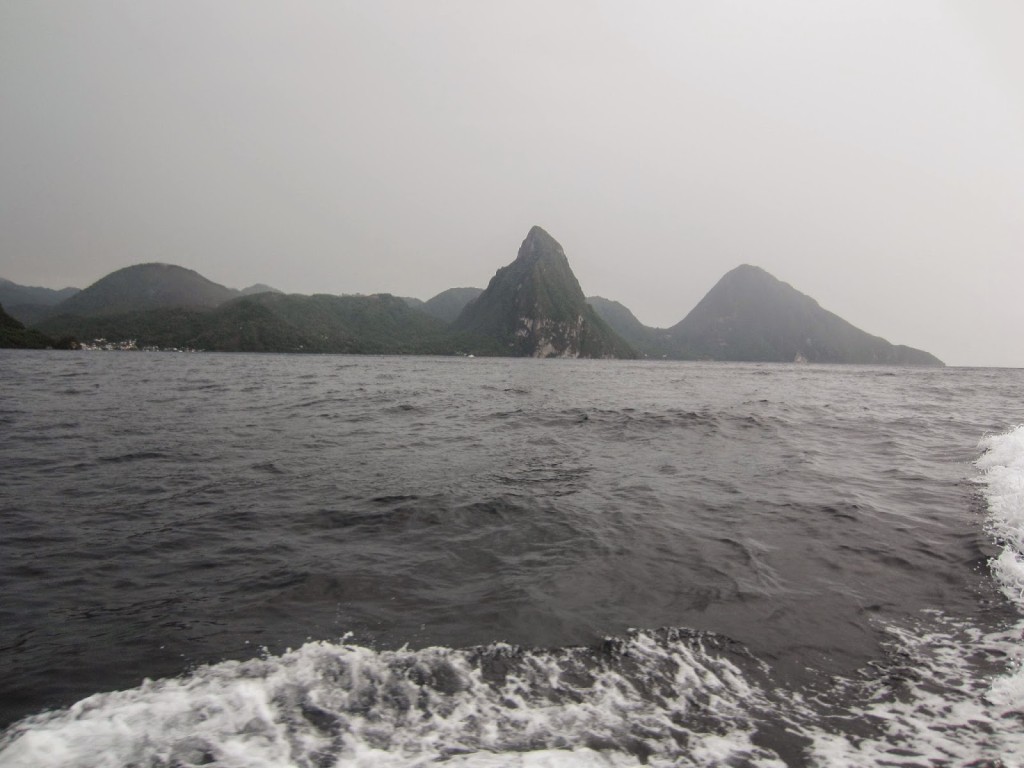 The trip was a total bust. Next time we’re going whale watching off of Montauk. This sucked. The weather made it freezing and miserable and not seeing any big sea life within easy viewing distance was totally
disappointing. The really magical thing about the boat ride that we didn’t see yesterday was the fact that after it rains here, the coast is peppered with waterfalls. They are everywhere. It was so beautiful, and the trees looked so much greener in the fog. It’s everything you’d imagine a rain forest to be. 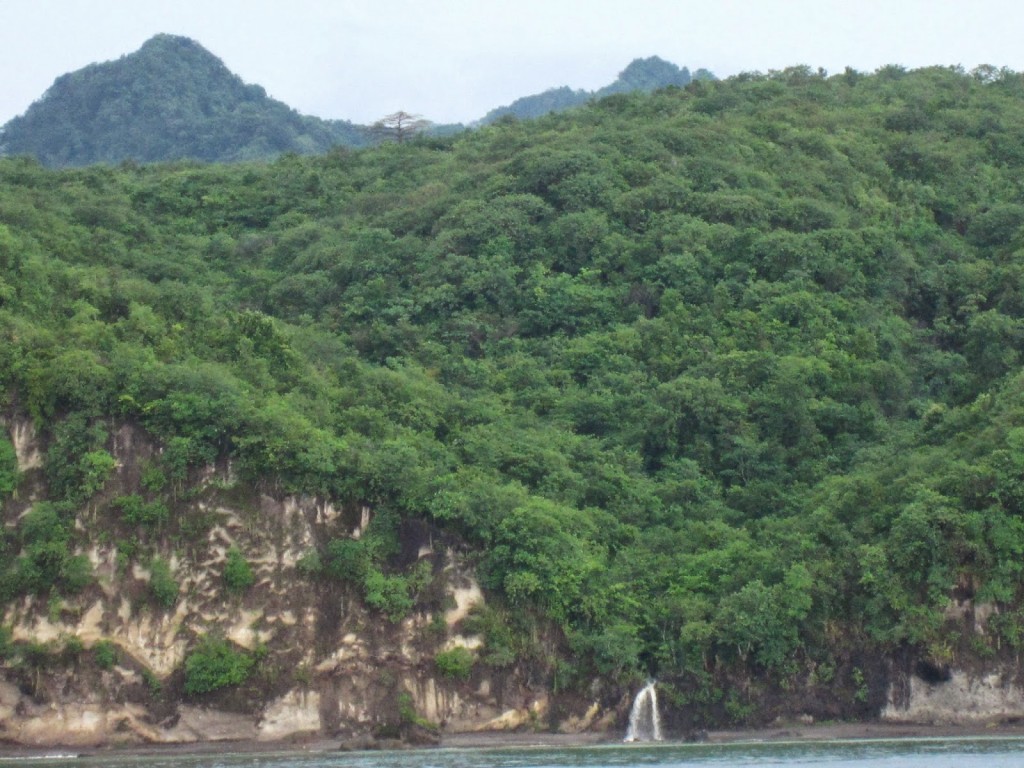 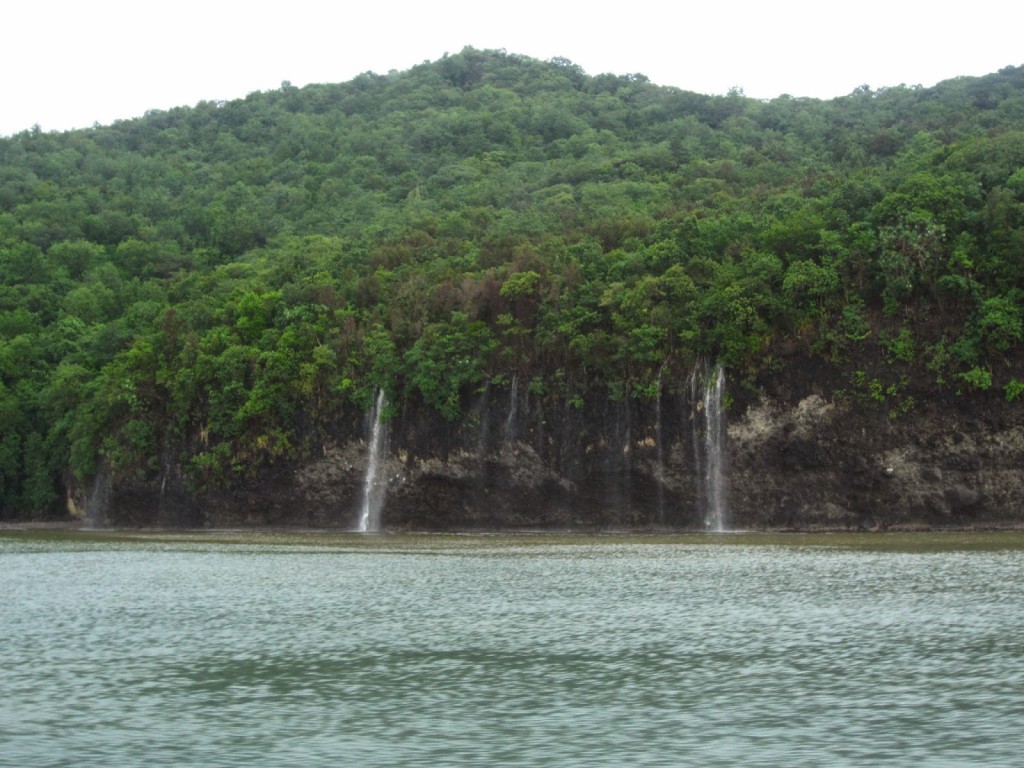 So when we got back we took a walk on the beach and hung out with today’s cats. They are so cute. They like to chase crabs on the beach. So below you can see some very determined kitties sitting next to a crab’s hole, staring down there like Alice and Wonderland, hoping a crab will pop out. The crabs are smart though. They all have an exit strategy, so the poor kitties are all tense and ready to pounce while the crab is like, doo doo doo, scooting out his back door like 10 feet down the beach. You can see this in the pic with the black kitty. 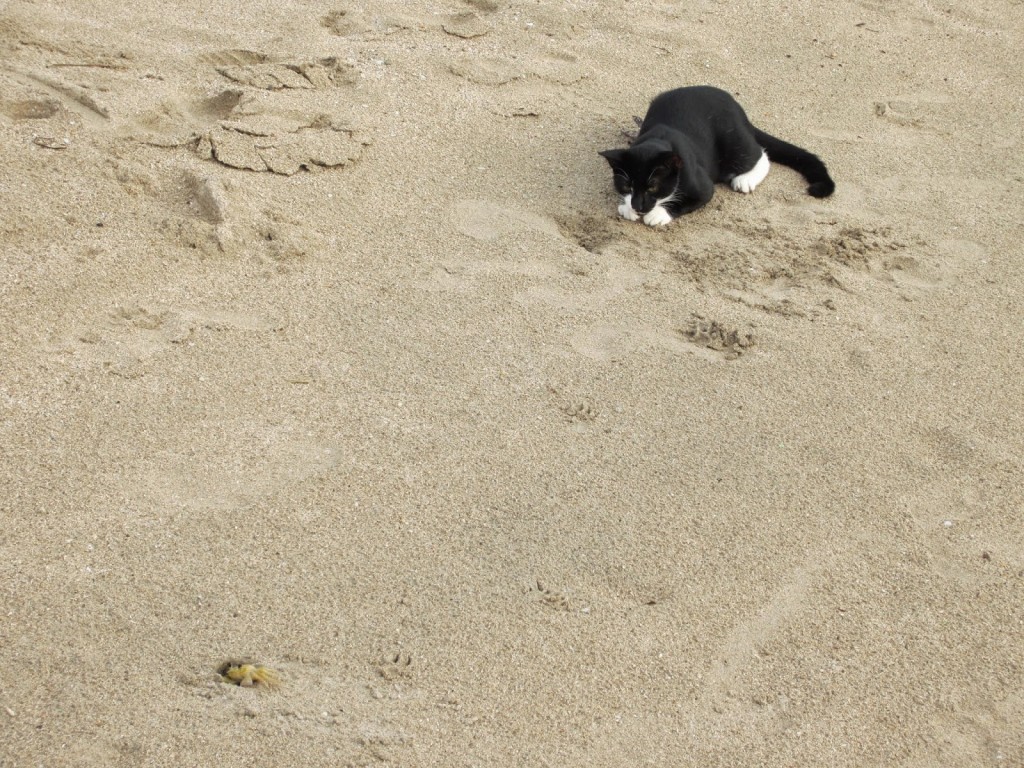 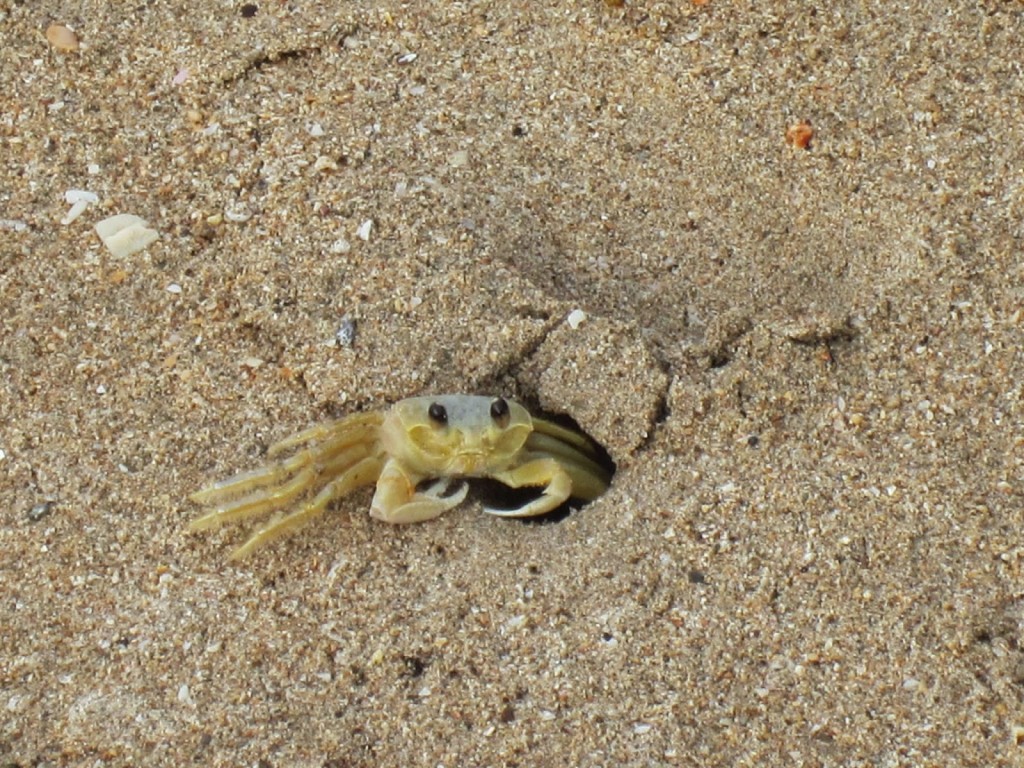 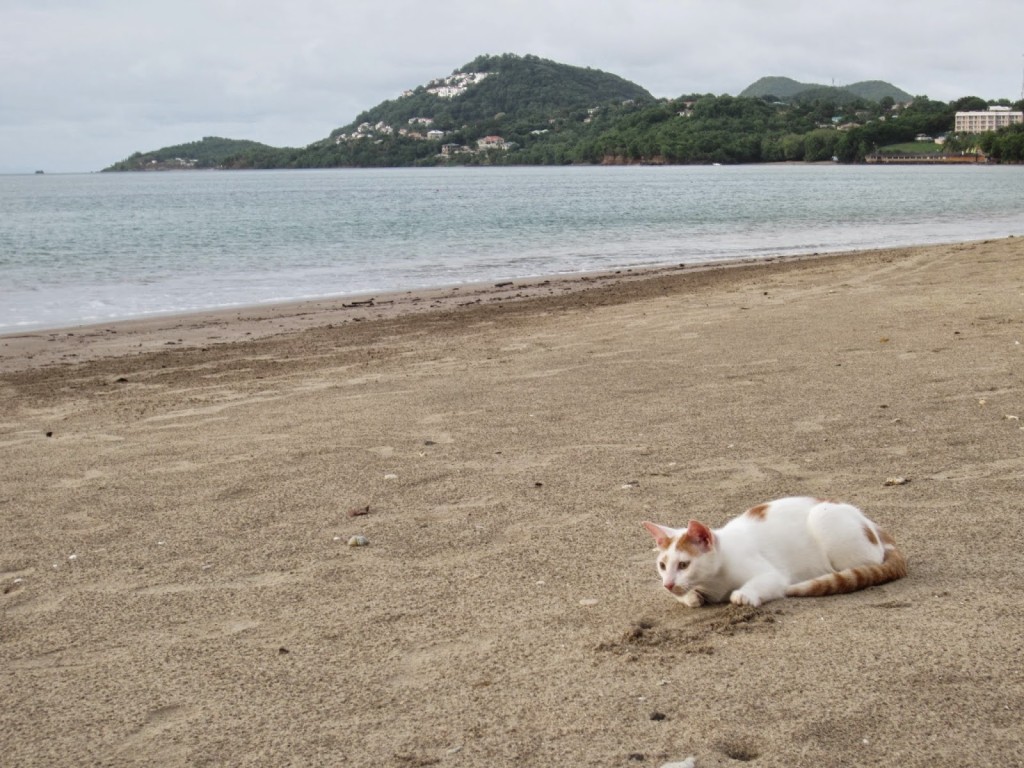 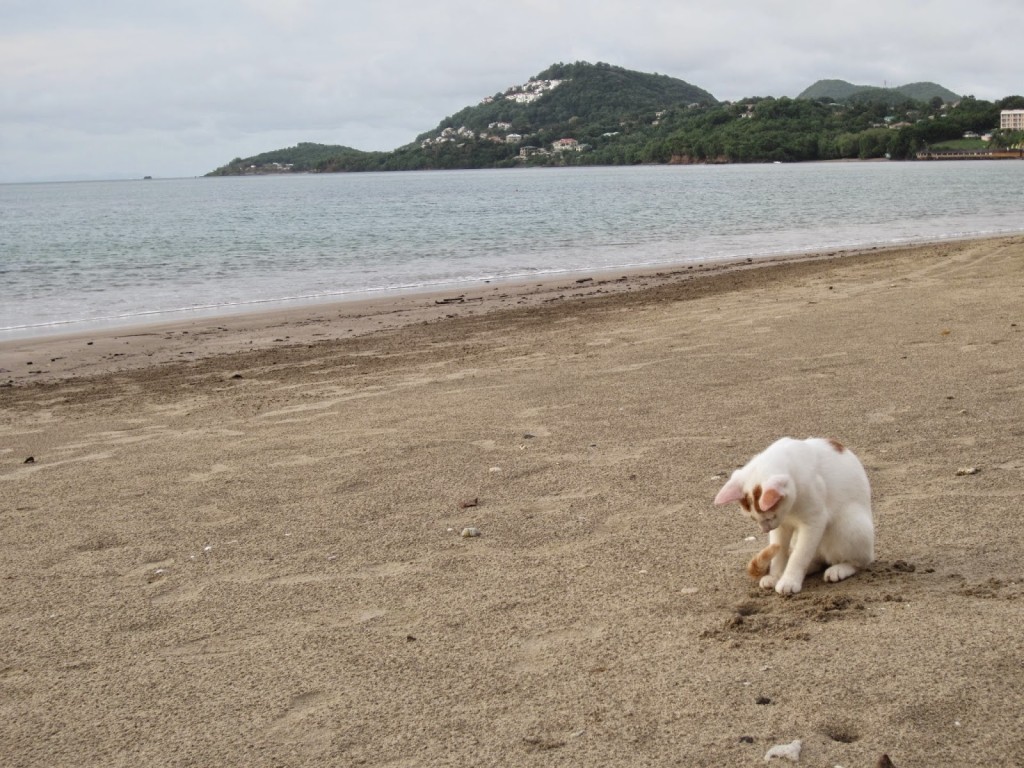 We had dinner at the hibachi grill with some other crazy couples who were trying to get as drunk as possible. The food was great even if the company wasn’t. This poor couple was sitting at our table who were celebrating their 25th anniversary. We’ve been hearing a lot of “happy life, happy wife” around here. Rob knows I hate this phrase. They always say that on all the DIY cable shows when the wife is totally mean. I mean, I’m pretty sure a happy husband counts for something! Happy husband = lots of home improvement 😉

I’m ready to get out of here. It’s pretty, but when we got here I was like, eh, we should have just stayed
in Montauk. The only way for us to see the island was to spend a lot of money on a tour. I did read a brochure on the Sandals Foundation tonight. Guests are able to donate some money from their stay to this organization and they contribute to the community in huge ways, like building schools, sports programs,
gardening lessons, and environmental stewardship. It’s very encouraging to see that Sandals is trying to make a difference in the local life here.

I didn’t even bother putting a picture of us from today.  Just imagine us tired, wet, and grumpy.