It has been a very busy week for the bathroom.  Rob has done such an incredible job getting all the tile down, so let me tell you what’s been going on.  After he pulled up the subfloor and laid down 1/4 inch Hardie backer as a new subfloor, he started the tiling process with the Snow White subway tiles I got from Home Depot.  They were very reasonably priced and came on a 12″x12″ sheet. 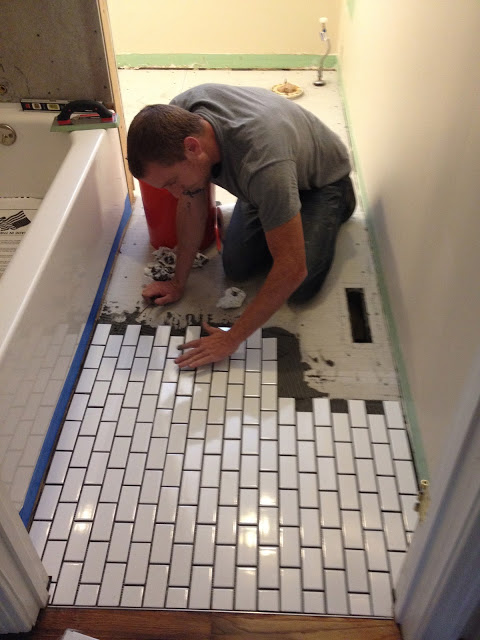 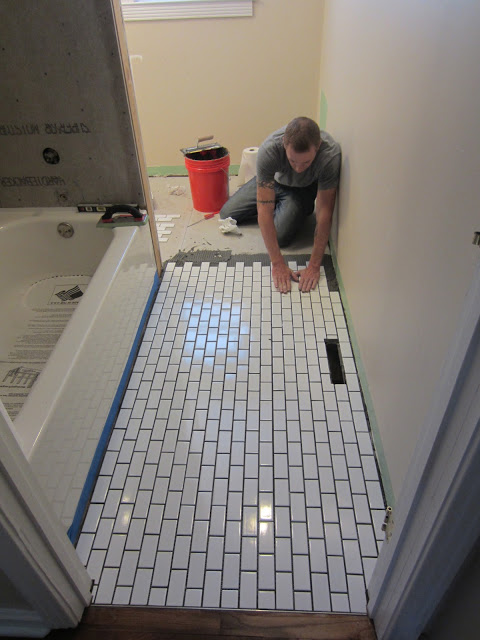 We realized shortly into the process that it would have helped immensely if white mortar had been used instead of gray, but it actually made me realize that I wanted to keep the detail and not use white grout. The second day we grouted and washed…what a process!!! I felt like Jill running up the hill to fetch her pail of water, over and over again.  But it came out so great!  There is a light gray grout in between the white tiles which gives them a subtle definition that looks lovely. 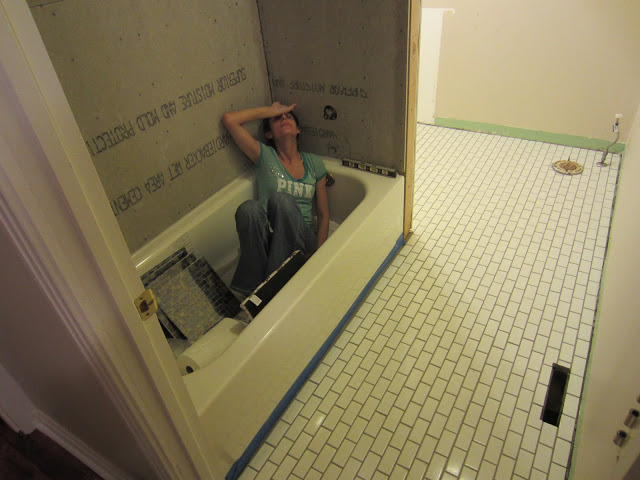 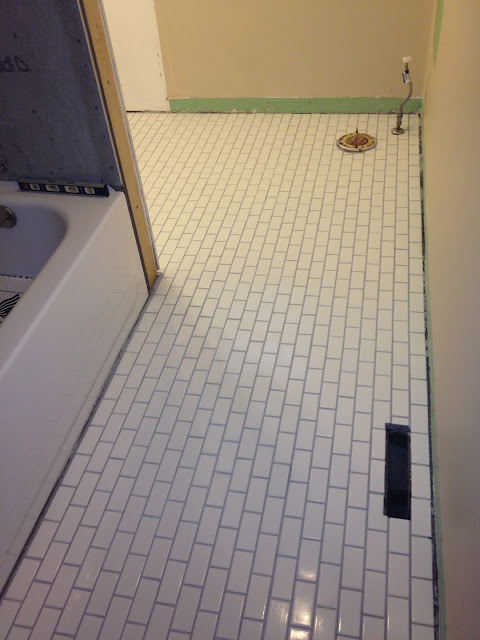 With the floor tile down, we were ready to move onto the tub surround!  I chose a tile called Vineyard Glass by Jeffrey Court, also available online from Home Depot.  I wanted to find glass tile that had blues and greens to create a beachy feel.  What resulted was something Mediterranean that really makes me think of home with the green wine bottles from the different local vineyards.

Here’s what we did.  It was important to tape plastic around the tub so none of the mortar or grout got stuck in the non-slip surface (thank you, Virginia, for that tip).  We used white mortar this time, and didn’t have to worry about cutting any of the tiles. Rob only had to cut one small strip off the end tile for the back wall and the two side walls worked out perfectly as well, thank goodness! 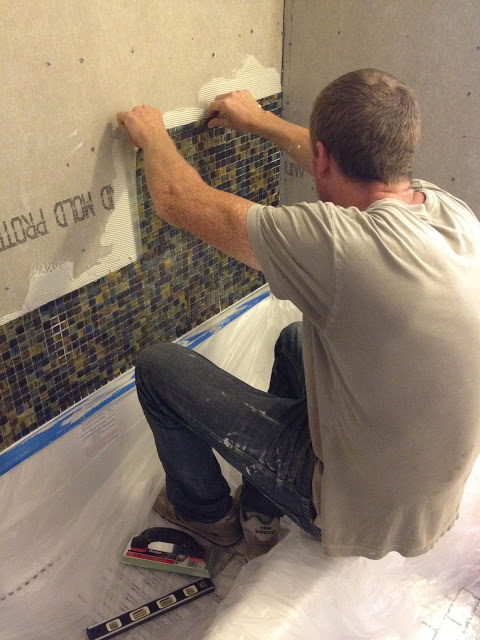 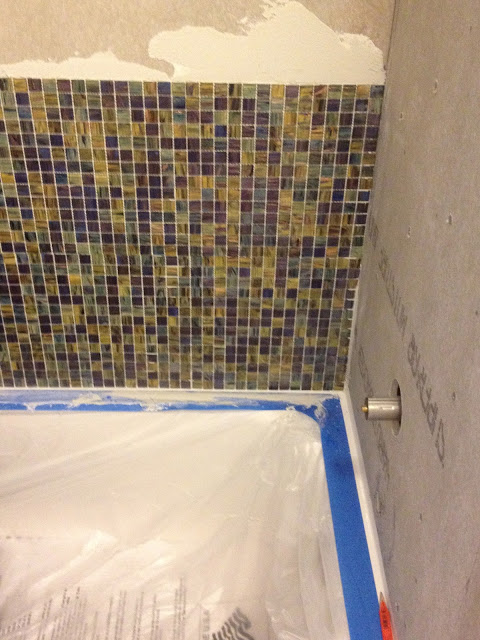 After all the tile was all up, we began the grouting process all over again.  This time using non-sanded grout which Rob compared to cake icing.  It went on very smoothly without the grit of the sand, which worked great for the small tiles.  These glass tiles were rather fragile and some chips were discovered after grouting.  I’m pretty convinced that sanded grout would have destroyed them. 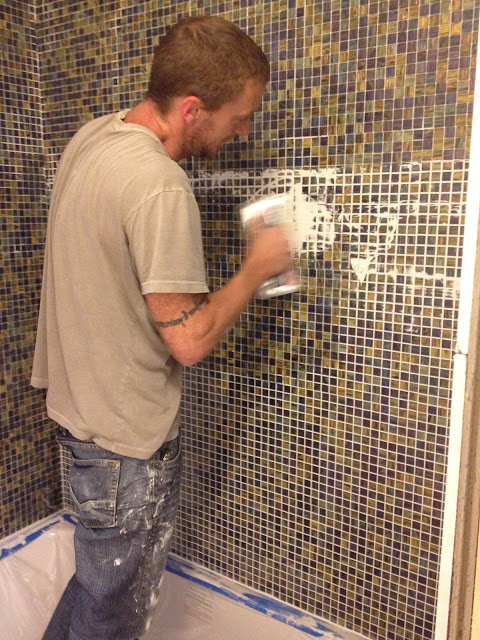 You can see the difference the white grout makes.  I was worried the tile was going to be too dark once a shower curtain was put up, but the white grout lightened it up beautifully and really added some dimension.

Once we got the grout washed off (Jill running up the hill again), it was simply gorgeous.  I could not be happier with the result! 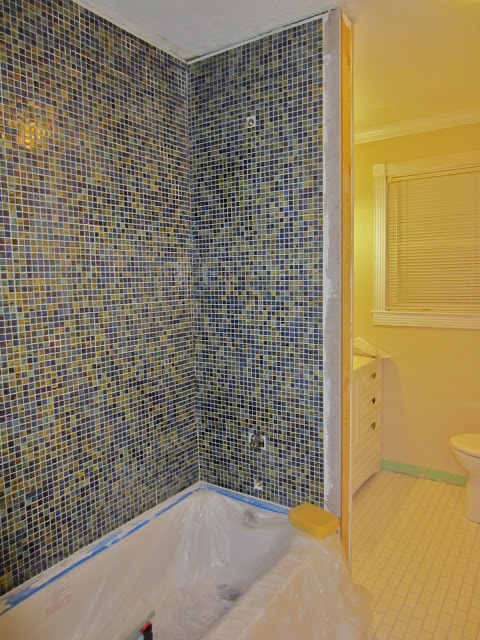