After being in LA for a week of excitement at work and June gloom weather, it was good to return to the nest.  I knew I’d been in LA too long when I found myself contemplating a pair of turquoise skinny jeans at Urban Outfitters.  It was time to go.  I love my job and the people I work with are simply amazing, fabulous, human beings who I feel so blessed to know.  But for the first time in a long time, I wanted to be back in TN taking care of things before the parental units arrived today.  Let me take you on my little journey home.

The bathroom is nearing completion!!!  I have never been so excited to take a shower.  Washing my hair in the kitchen sink was a nightmare, but thank goodness it was short lived.  There are still things to do, but this is what’s happened in the bathroom. 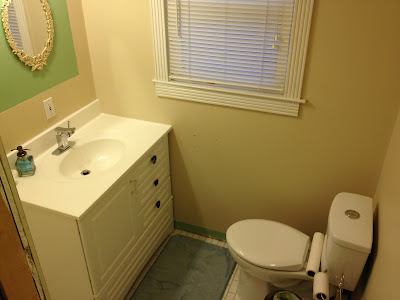 The new vanity is firmly in place, replete with glass hardware from Anthropologie (on sale for $2.99!!!) and a new high efficiency toilet has been installed, purchased from Costco for less than $100.  Don’t worry, a new mirror is coming, the one in the picture is just there to help out right now. 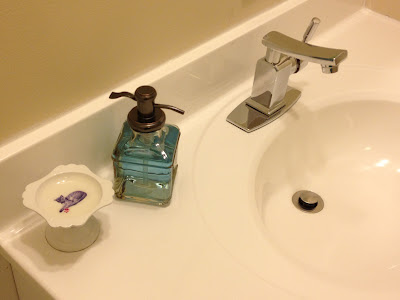 Sink faucets are expensive!!!  This cool looking modern one was listed on Overstock.com for $139.99, so I went on Ebay and ordered the knock-off version for $36.  The only problem was the hoses that came with it weren’t a standard size, so Rob spent some serious time with the plumbing “specialist” at Home Depot figuring that one out.  And who knew Target carried such adorable soap dispensers!  Thanks to a stay with my friends in LA who took me to Target to buy my very own copycat version of theirs 🙂

Here’s a picture of the completed shower tile, but this just can’t do it justice.  There are pretty sparkly parts and it’s all blue and green and sea-glass-ish.  I love it!  If only I could take all my readers in the shower with me to experience the awesomeness that is this tile….but well, that would be all kinds of awkward. 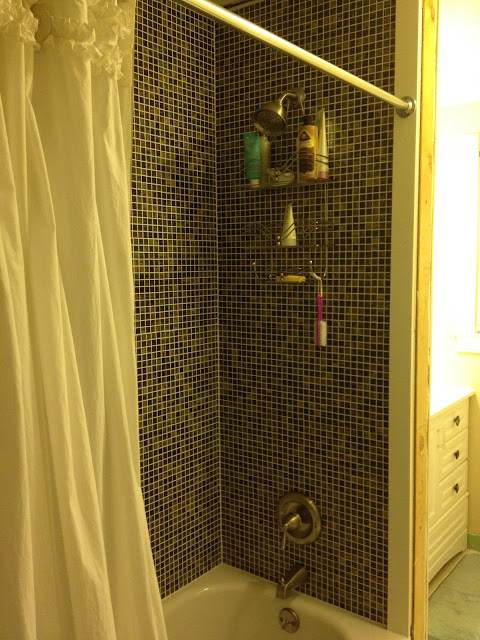 A lot has been happening in the yard as well.  When I was mowing the lawn I noticed that the roof had been knocked clean off the bluebird house.  I looked inside and there were four perfect blue eggs.  Bluebirds and robins are in the same bird family so the eggs look very similar. 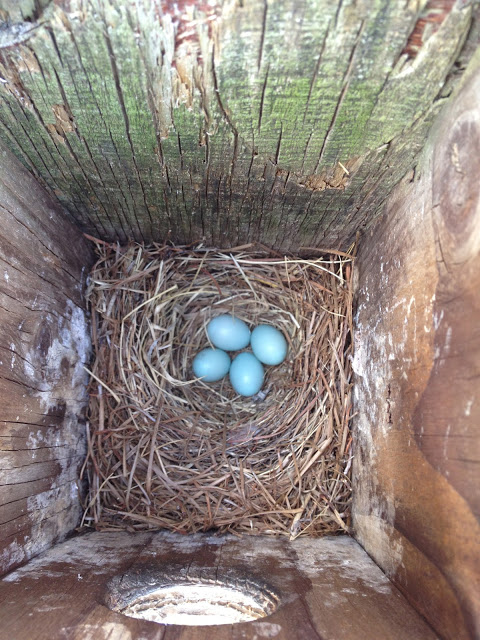 I put the roof back on the house and banged the nails in, but I was very concerned about how long the eggs had been left uncovered.  Today I saw the mama bluebird telling some other bird off and waving her wings around like she was a NYer defending her right to eat hot dogs from a street vendor.  Hopefully the eggs will survive and my little bluebird family will fly happily into the sunset. 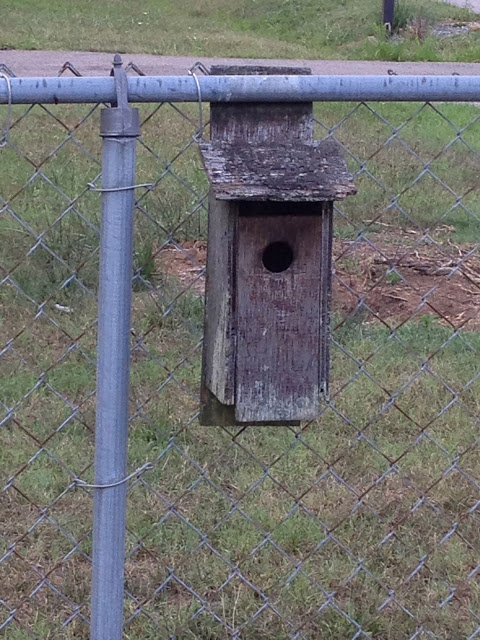 There’s also been some action in the weeping cherry tree on the front lawn.  Those of you who know me well know that I am a total nerd when it comes to butterflies.  I raised them as a kid, then as a teenager, and am still quite obsessed with them.  I love butterflies and moths.  They bring such beauty into the world for a fleeting time.  I think they are magical.  Eventually when I figure out the backyard I want to have a garden with plants that will attract them, but for now, I was thrilled to find this chrysalis.  My caterpillar/chrysalis identification book is buried in a box somewhere, but I’ll eventually be able to tell what it is.  It could be a moth considering the shell is covered with leaves, but moths don’t tend to hang as much as butterflies do while in this phase.  I liken this to finding a Tiffany bag under the Christmas tree! 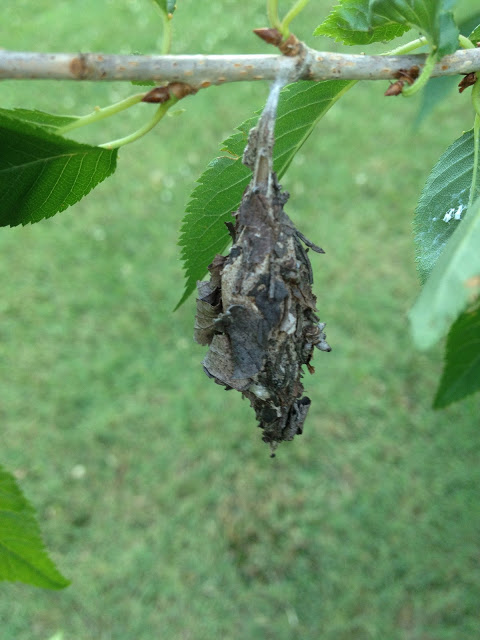 I have some sad news…I think one of my Purple Leaf Plums has some kind of borer in the bark.  The tree has looked weak since I moved here, but half of it is dead and it’s not looking good.  I hope it can survive.  Dad was a horticulturist and used to inspect greenhouses for plant diseases so I need to see what he thinks. 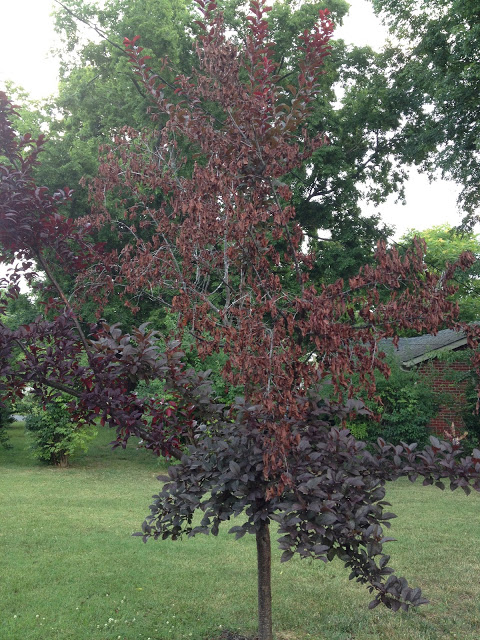 I bought a rug!!!!  The living room rug was super tricky, but after looking at thousands of rugs online, I settled on this “deco inspired” one because it ties in the black of the fireplace with the cream color of the furniture.  The walls will be a pretty light green called “Recycled Glass” and it’ll look much more colorful once it gets painted. 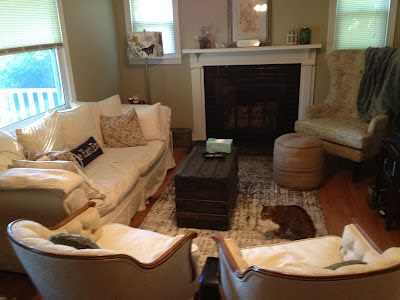 People always ask me about “The East End” pillow.  I bought it at Hildreth’s in Southampton, Long Island.  It’s what the locals call the North and South Forks of the island.  Historically it used to only refer to the South Fork, but everyone on the North Fork says they live on The East End too, so I’m claiming it. 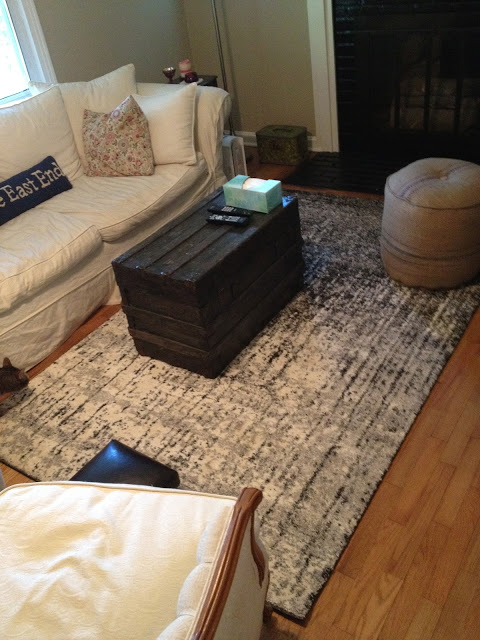 And lastly, I leave you with a flower.  My dad has a way with plants and I can only hope I inherited half of his magical green thumb.  A great pastime of his is hybridizing daylilies, which is creating his own varieties by cross pollinating plants.  I planted several along my front walk and since the first bloom they all sent up second shoots of buds.  This one was open to greet me when I came home.  None of them are named, so perhaps I shall call this one “Welcome Home.” 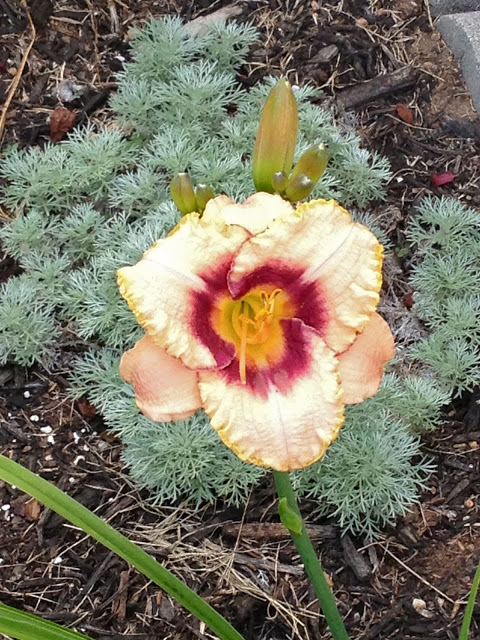