For our our second day in GSMNP, we decided to do the Roaring Fork Motor Nature Trail before heading into the main part of the park.  It’s a six mile loop just outside of town that you can drive through for lovely views of mountains and rocky streams. 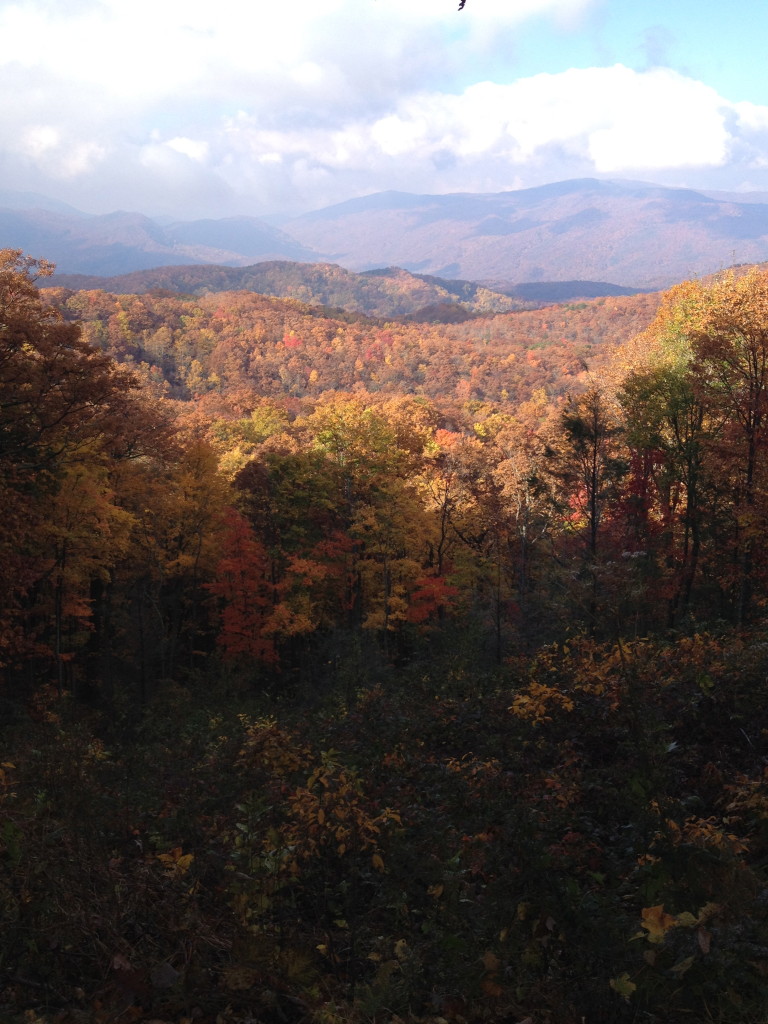 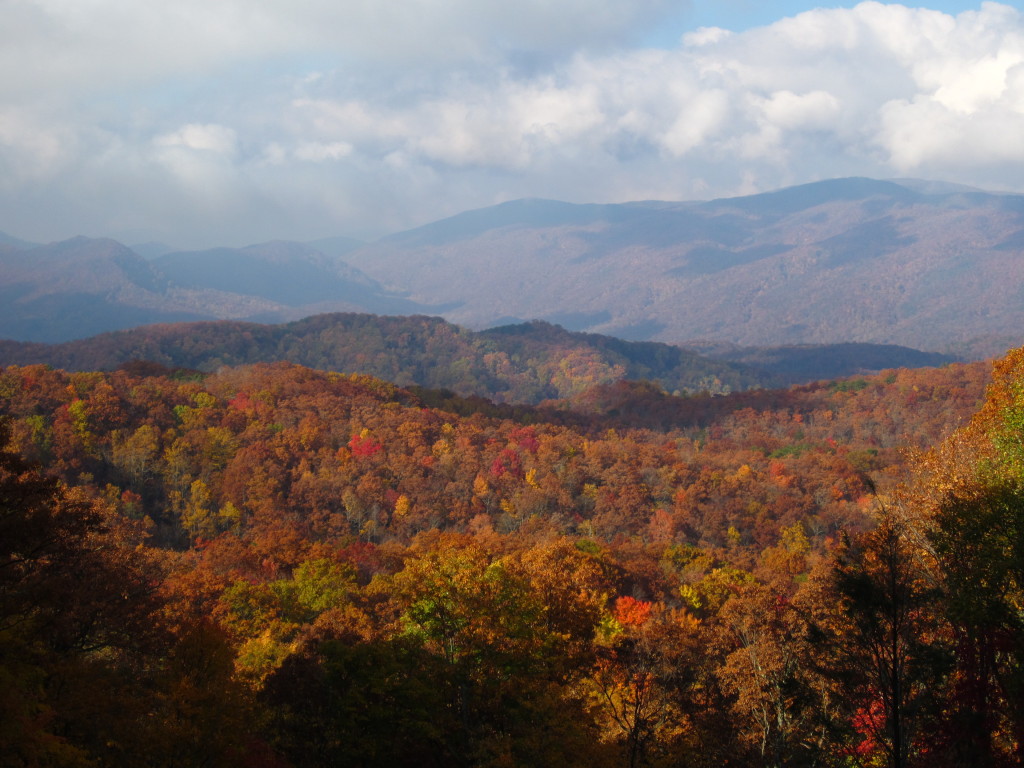 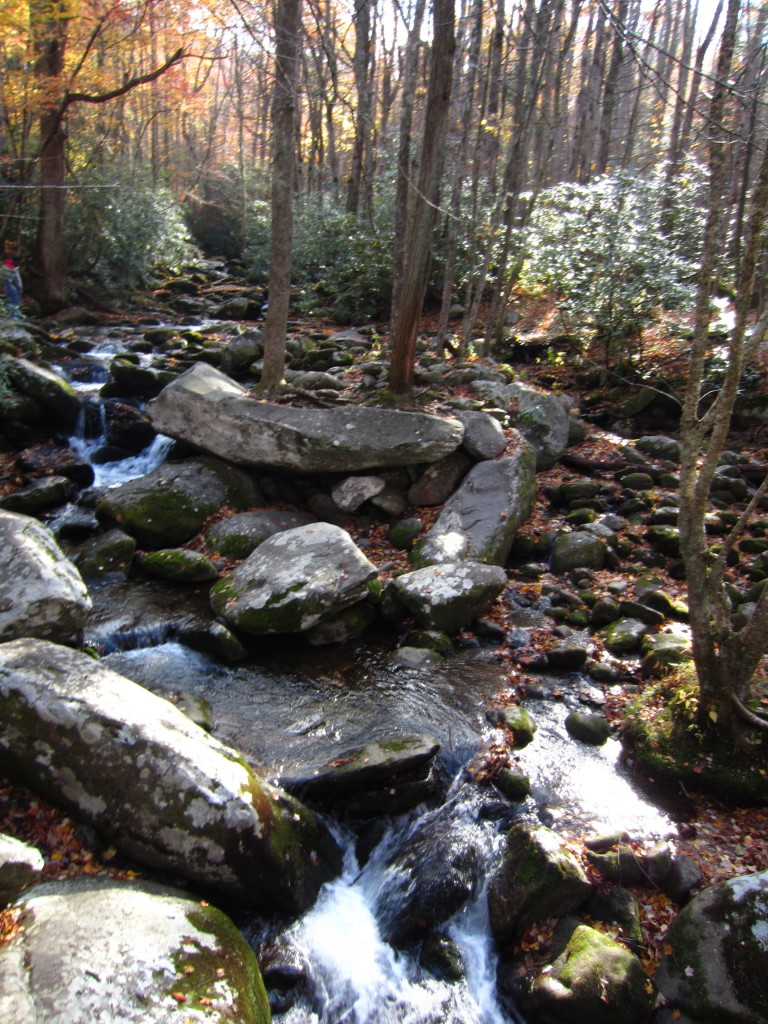 The thing about this motor trail that I didn’t realize is that to see any of the falls you always see in pictures promoting this trail, you have to hike to them.  Be not lulled into the phrase “motor trail” or you will be sorely disappointed that it’s just a very narrow paved driveway through the woods.  As pretty as the woods were, I thought we’d see more.  The speed limit is 10 mph I think, and if you are a New Yorker who gets behind someone who actually drives the 10 mph, you will go mad.

After we ditched the motor trail, we headed straight back into the park for a quick hike to Laurel Falls, as recommended by the nice old man at the visitors center.  Let’s be honest, the Laurel Falls trail is not for anyone who enjoys hiking.  The entire trail is paved.  The people who hike this trail don’t want to hike, they want to throw trash in the woods and let their children careen off the trail, screaming and yelling and throwing Cheetos.  Rob actually started picking up bits of trash on the way back, that’s how bad it was.  In fact, we sped past one poor sod of a dad pushing a double wide stroller up the damn path.  A DOUBLE WIDE!!!!  The trail was quite uphill, so I don’t know how he didn’t perish in the act.

When we got to the falls, it was totally crowded.  There were signs everywhere warning people to be careful because other humans had died from falling, but people still climbed all over the slippery rocks and we actually watched one guy take a nice tumble on some slippery leaves.  The falls themselves were pretty.  I mean, nothing to write home about or anything, especially with the yellow “danger” signs everywhere, but pretty nonetheless. 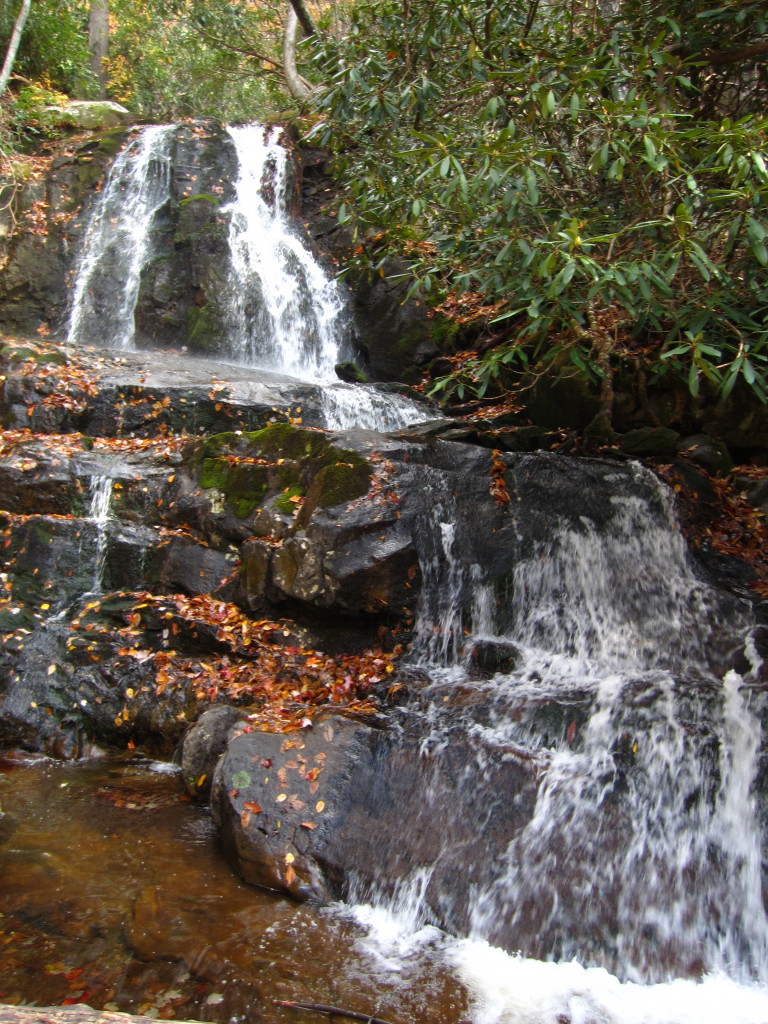 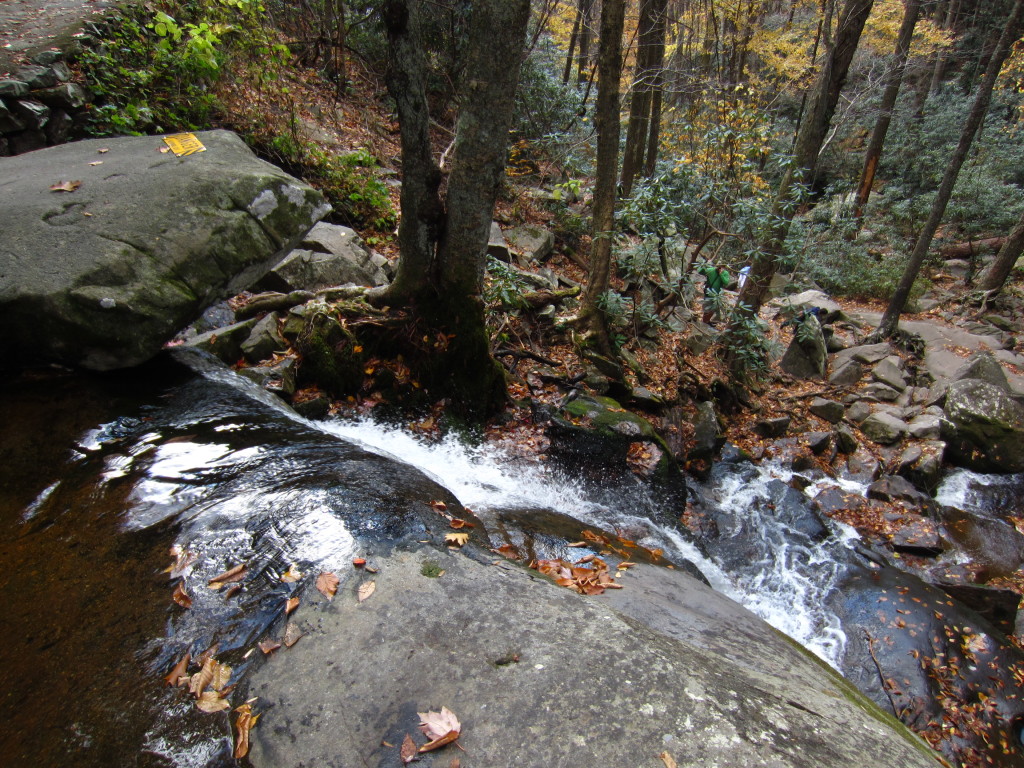 The blatant disrespect people have for nature when they are right smack dab in the middle of it is astounding to me.  If you’re coming to this park and really like to hike on a real trail with less traffic, avoid Laurel Falls.

Ok, onto the next gem in the park that we thoroughly enjoyed, Clingman’s Dome.  This is the highest point in the park and in Tennessee.  If you feel like you could stand to lose a bit of cellulite on the thighs, this is the trail for you. 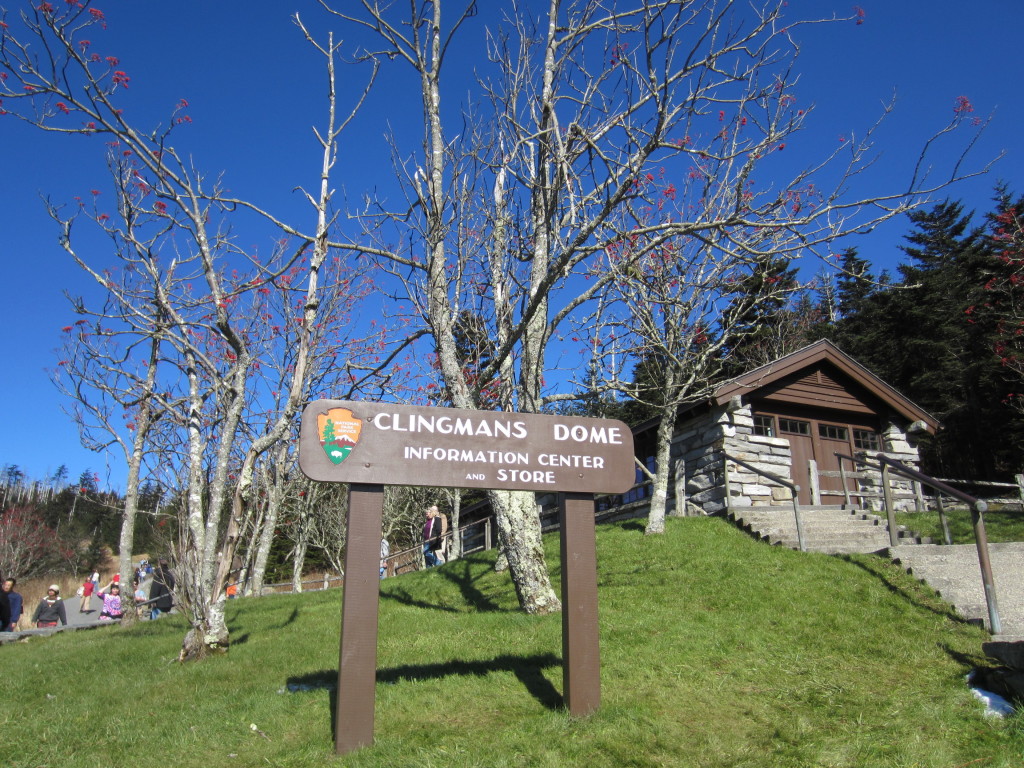 So you drive to the top of the mountain and think it’s going to be a merry little walk to an observation tower.  No.  It’s a brutal incline that will have your legs hating you for days.  But honestly, it was worth every painful step.  The view on the way up is lovely and is worth admiring for minutes at a time every ten feet or so, this way you can catch your breath.  When you get to the top of the hill, you still have an icy winding ramp to navigate up to the tower.  People were hanging on for dear life.  One kind man decided to tell me “that side is slippery” while I was in the middle of sliding my way up.  Oh, thank you, I hadn’t noticed. 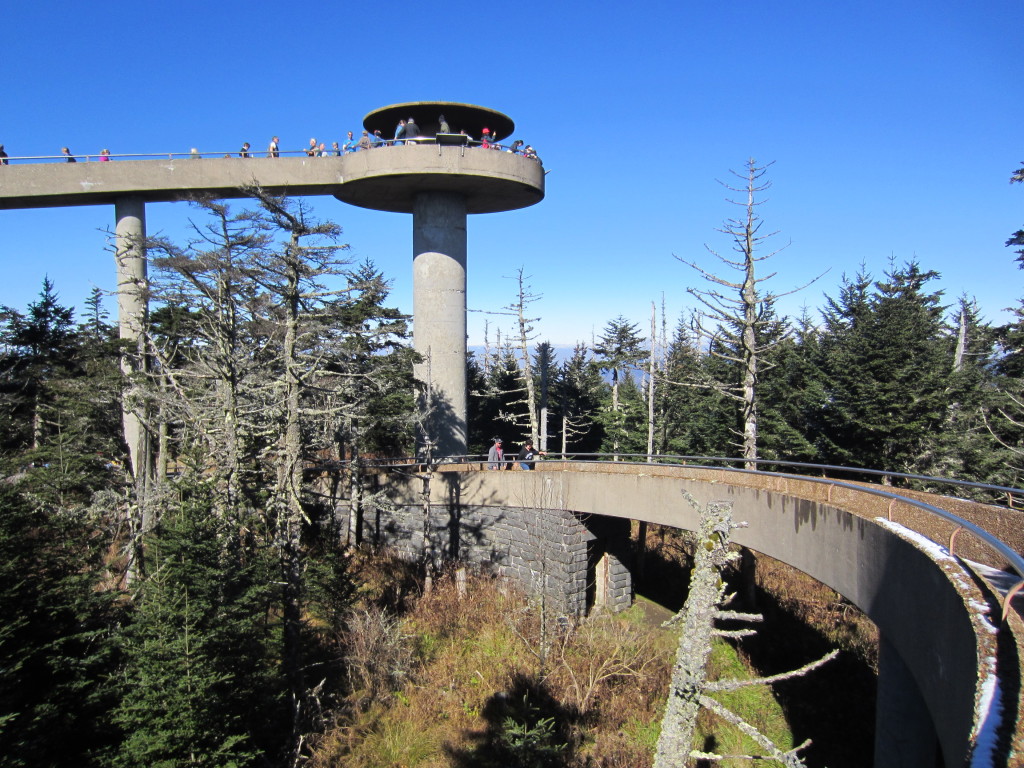 When you get to the tower, your breath is stolen by the view.  360 degrees of rolling mountains and Fraser firs. 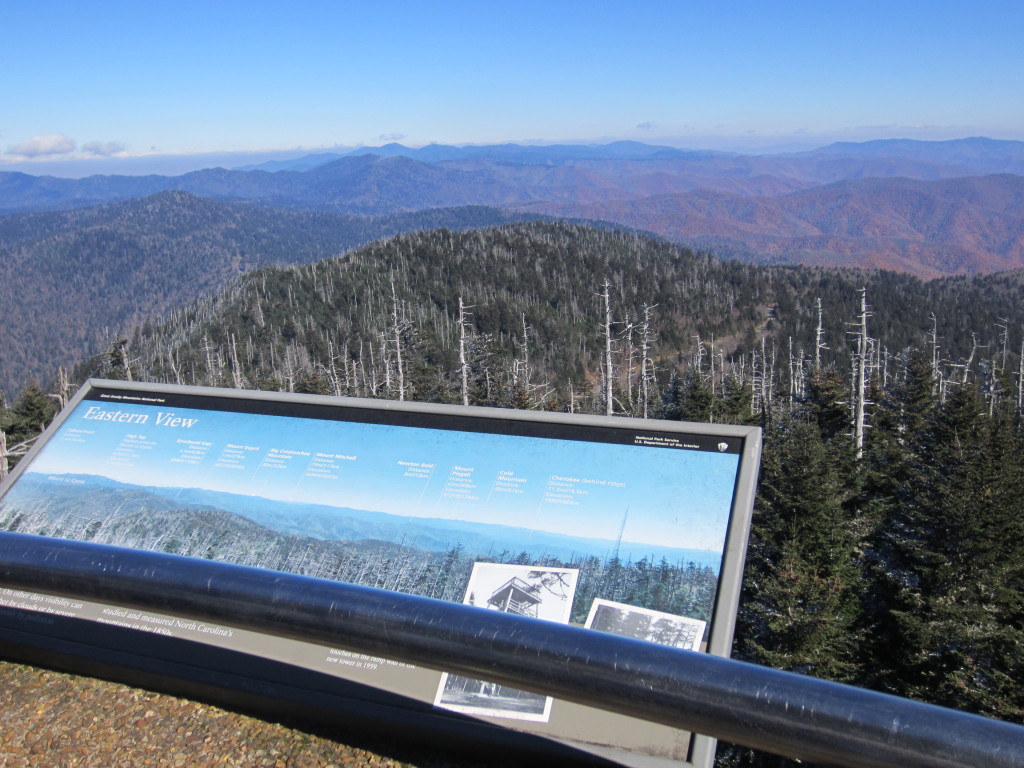 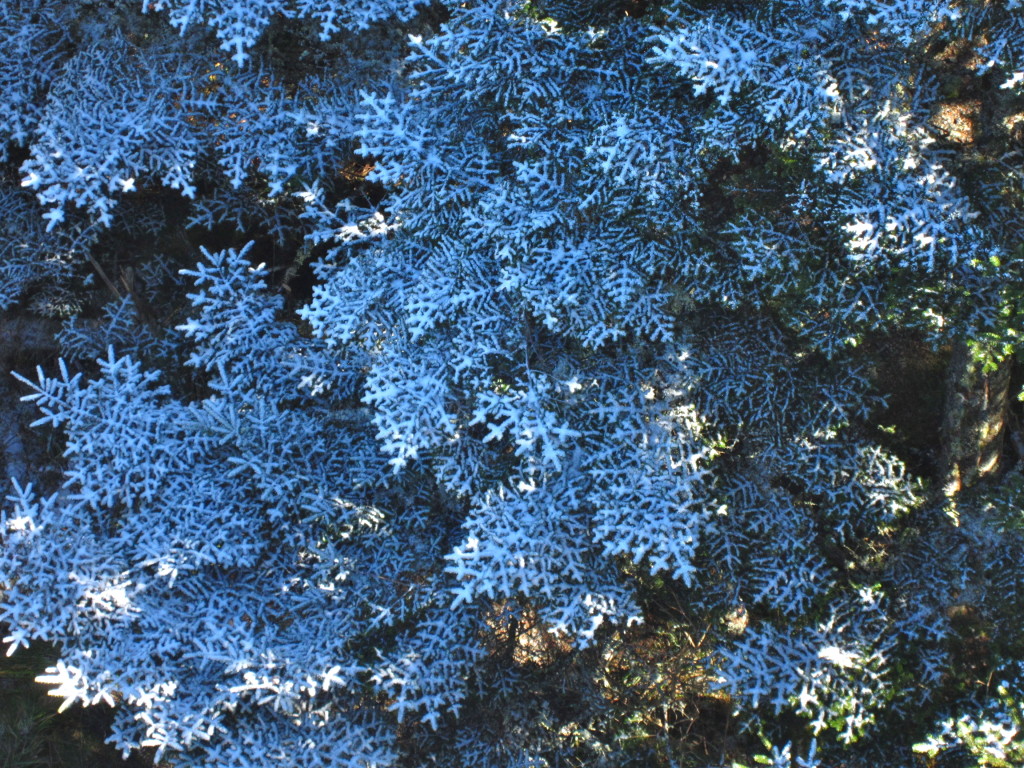 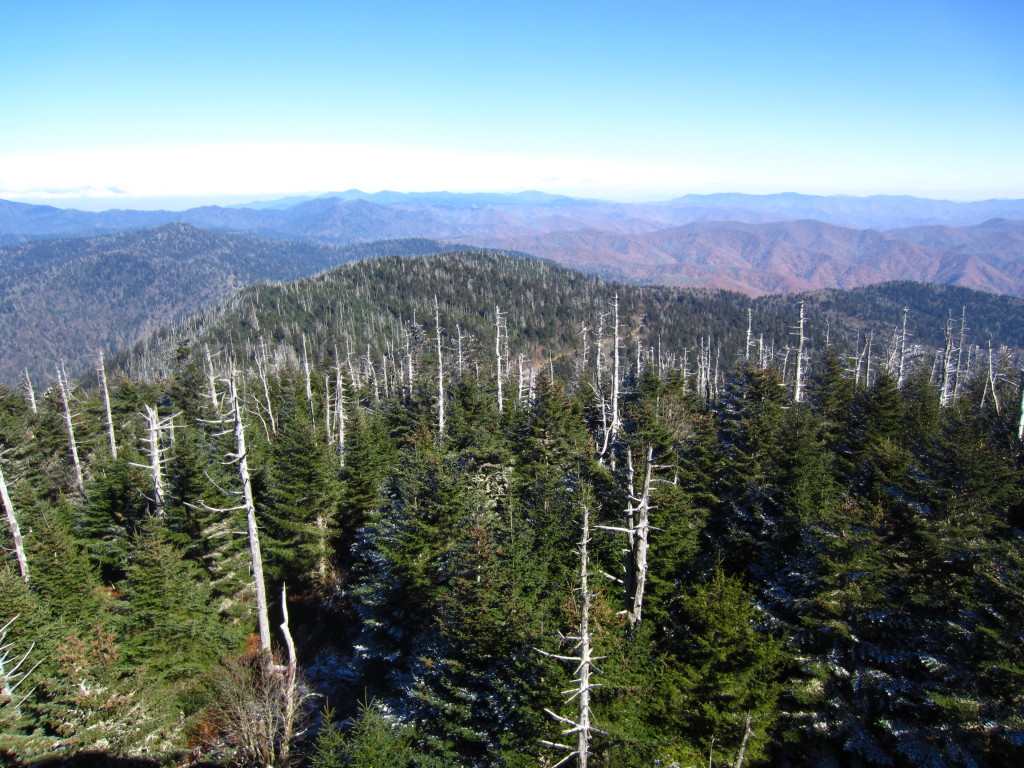 It was like an ocean of mountains.  The horizon stretched into infinity and layers upon layers of smoky blue mountains reached to the edges of the earth.

We slid back down the ramp and came upon a sign for the Appalachian Trail.  Someday I want to hike this trail…well, a decent part of the trail.  I mean, let’s not get crazy.  As awesome as it would be to pull a “Bill Bryson” and write a book about it, there really isn’t anyone at this point who can improve upon A Walk In The Woods.  Rob and I walked onto the trail a bit.  It was very exciting.  There is something incredible about the Appalachian Trail that demands respect and inspires awe.  The trail stretches 2,180 miles from Georgia to Maine, and to see this small piece of it in the middle of these magnificent mountains was really thrilling.  Of course if I am ever going to really have a go at this I need to hit REI for some real shoes and leave the Betsey Johnson boots at home. 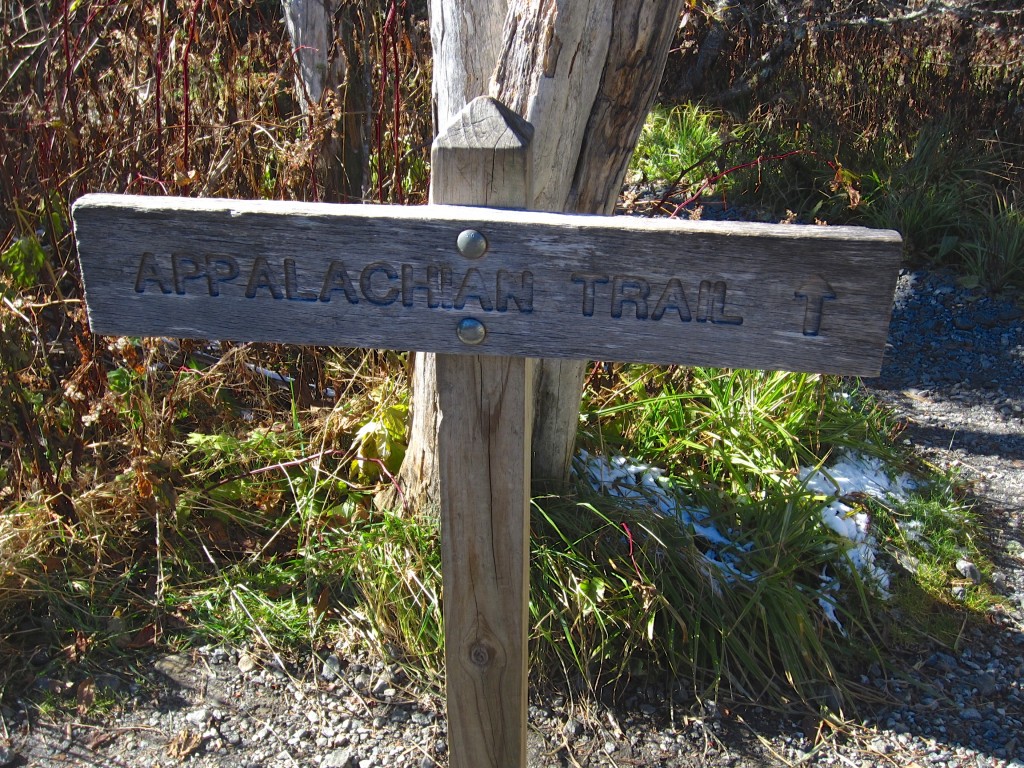 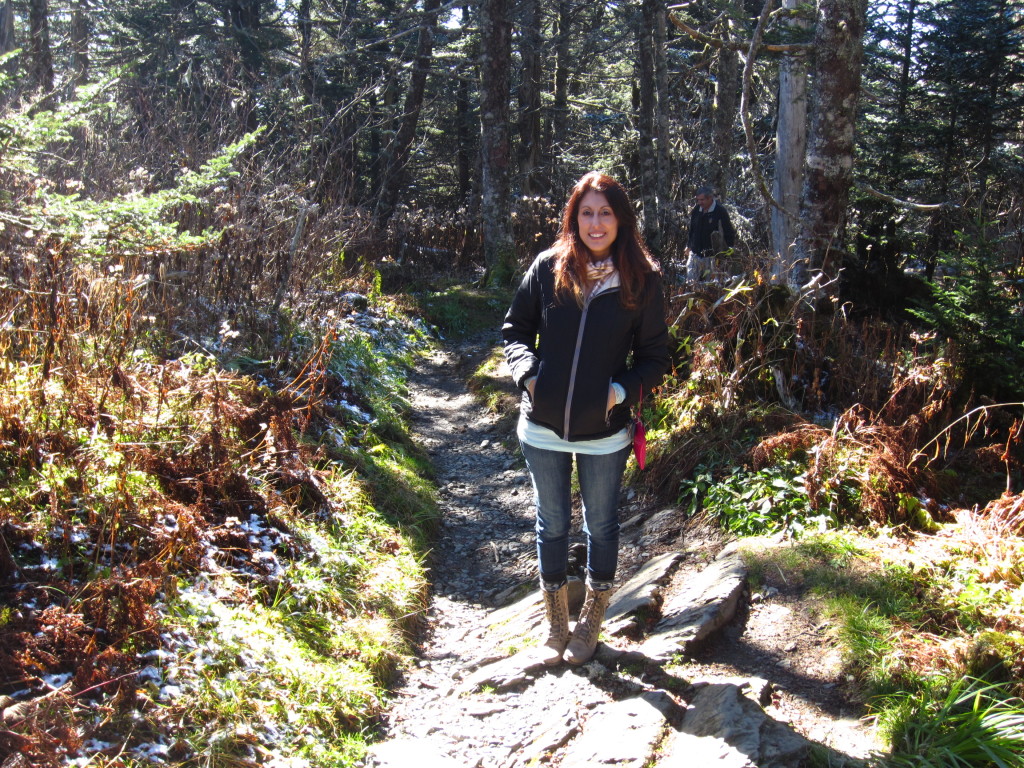 We took one last look at the view and began our descent on fumes.  The gas light came on just as we were heading down, so we tried to coast a bit. 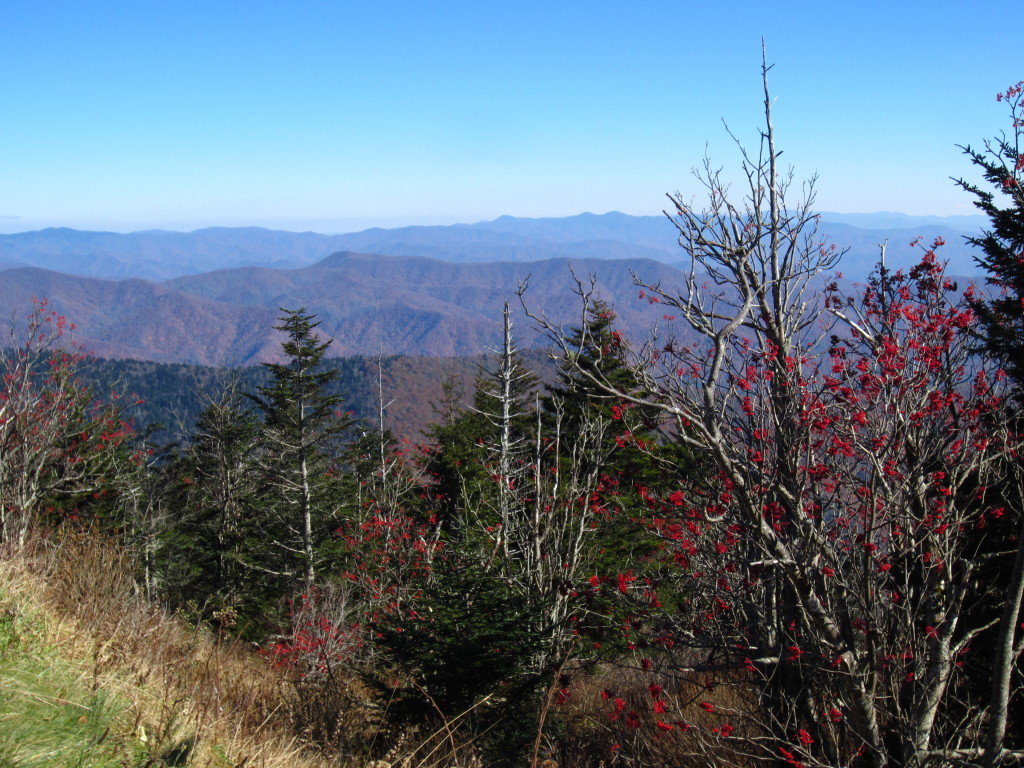 There was one more stop we wanted to make at the Newfoundland Gap overlook at the state line.  At this stop there were plaques explaining how the Smokies got their name.  Apparently the vegetation lets off a smoky blue gas into the atmosphere.  Over the years, pollution has contributed to the haze one can see over the range, and as nice as a perfectly clear day would be, it was much more mysterious to see the blue peaks in the distance. 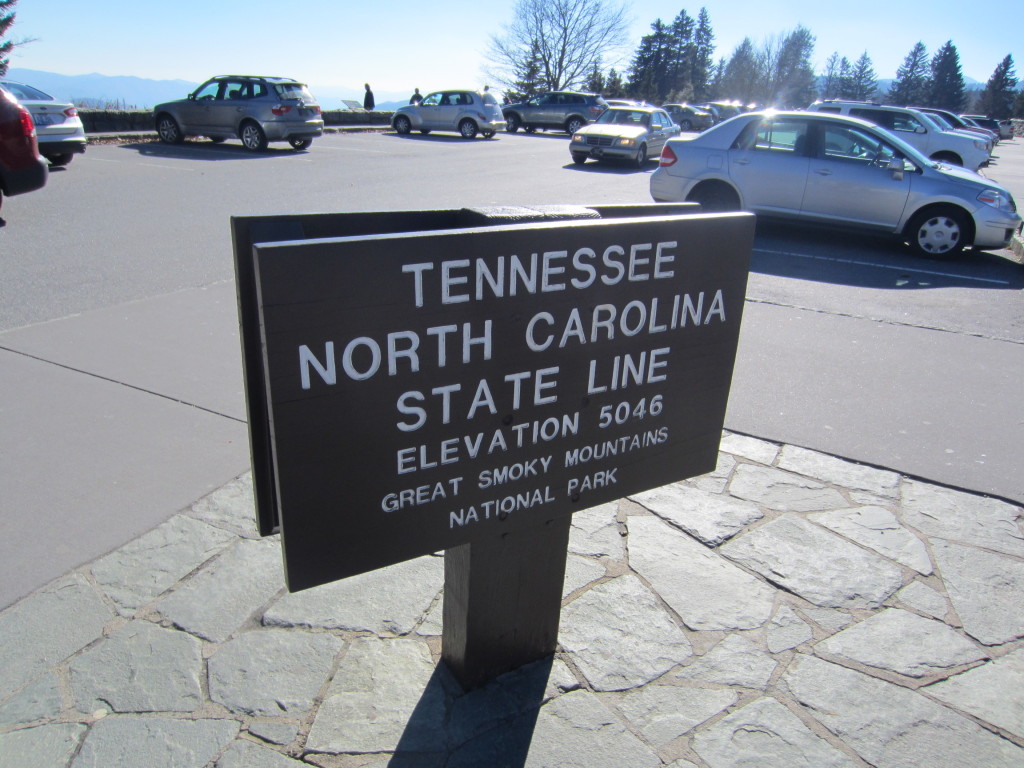 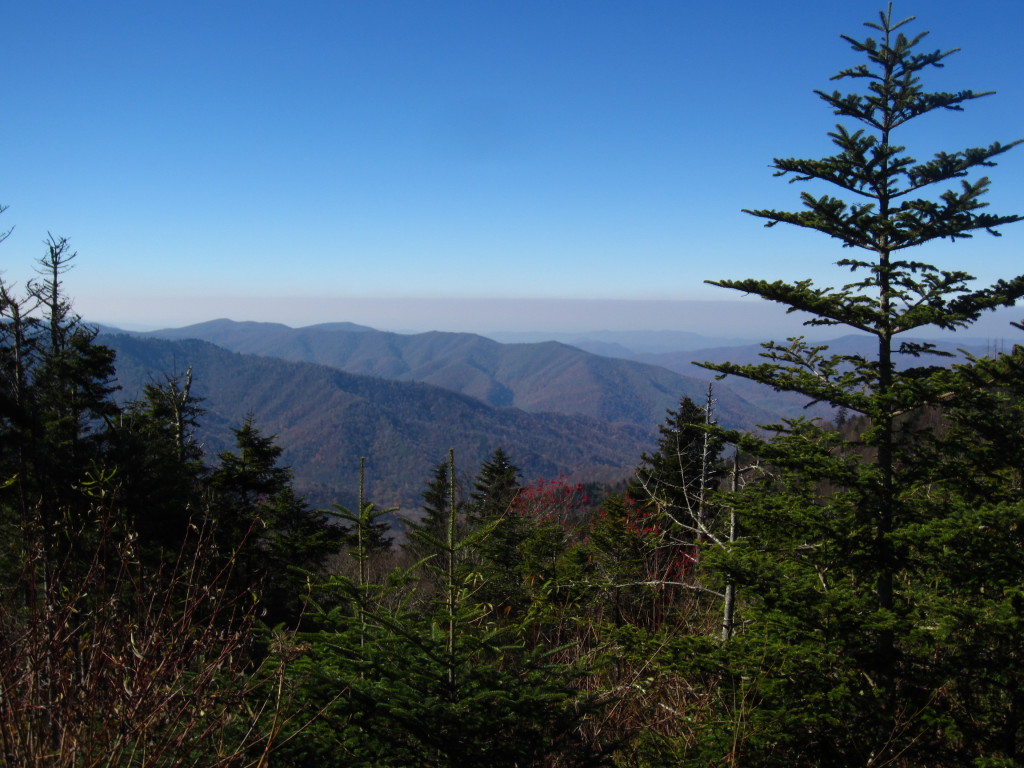 We didn’t see a black bear.  I was dying to see a bear.  Everywhere we went we overheard people talking about seeing bears and showing friends their cell phone pics of the bear that was 6 feet away from them.  I can’t complain though.  We had such a lovely time in the mountains and it was beyond refreshing to get out of town and feel like we were in another world for a while.  Hopefully someday we’ll come back here and explore some more of the trails.  After all, there are 800 miles of them.

Previous Post: « Great Smoky Mountains National Park: Getting Out Of Tackytown And Into The Woods
Next Post: Another East End Sunset: A Sky On Fire »