Don’t ever let anyone tell you a plant won’t break your heart.  You know how sometimes therapists recommend starting with a plant for people who are getting over a bad relationship or trying to move on?  I think they do that to be cruel.  Because plants will break you.  You will pour your heart and soul into them, fill yourself with hope that they will thrive, and just like that they’re dead and you’re alone.  The thought is that if you can keep a plant alive, you’re ready for a relationship again, but that is crap.  Get a cat.  If you can make a cat love you, you’re ready for a relationship.

I love posting pictures of my vegetable garden online.  It’s fun to show the harvest we get and then have people over the house to cook meals for them with the food we grew.  But there is an ugly side to gardening that every person who’s gotten their hands dirty has experienced.  Sometimes there are circumstances beyond your control that cause things to go awry.  While it’s great to show the happy successes of the garden each year, I think it’s also important to acknowledge the utter failures and frustrations that sometimes go along with the effort of planting.

This year in middle Tennessee the rain has been relentless.  Monsoon levels of rain have poured onto our little garden.  While this might sound like a good thing in summer when water from the sky can be hard to come by, the principle of “everything in moderation” definitely applies here.  The humidity has been off the charts, and with days and days of downpours (long ones and short ones) that have lasted for weeks/months, my plants have stuck their middle finger high in the air and said, “F this!!!”

After being away on a trip, I came home last night to a graveyard.  Rob tried to warn me how bad it was after all the rain, but I thought, “How bad can it be?” Rotten cucumbers that didn’t even have a chance to mature.  Peppers on the ground that literally fell off the plant because they rotted off.  Basil that had dropped all its leaves (Why???  Why did you let go?!).  Tomatoes covered in blight valiantly trying to hang on.  And squash that has succumbed to vine borer.  I planted the squash later this year after getting some advice from a farmer that planting later helps avoid vine borer.  Liar.  I have not had a worse year of planting and it broke my heart to see so much effort drowned out by relentless rainy days. 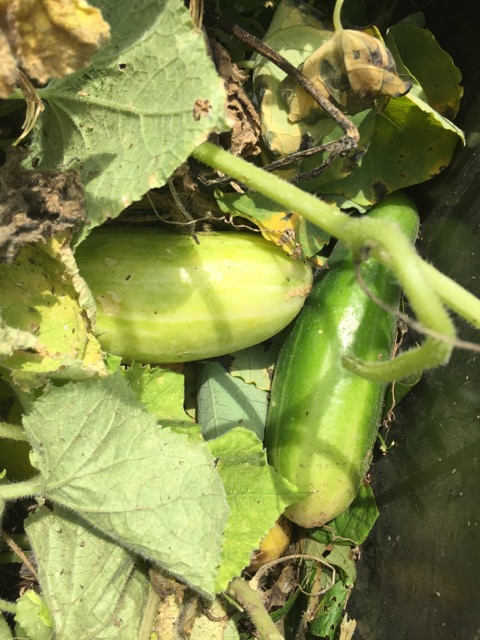 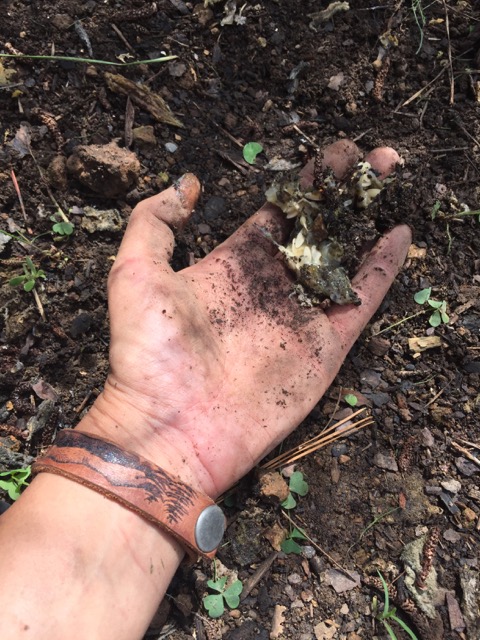 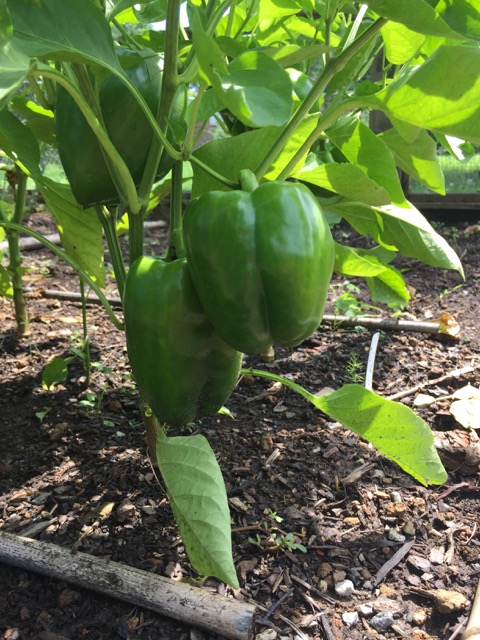 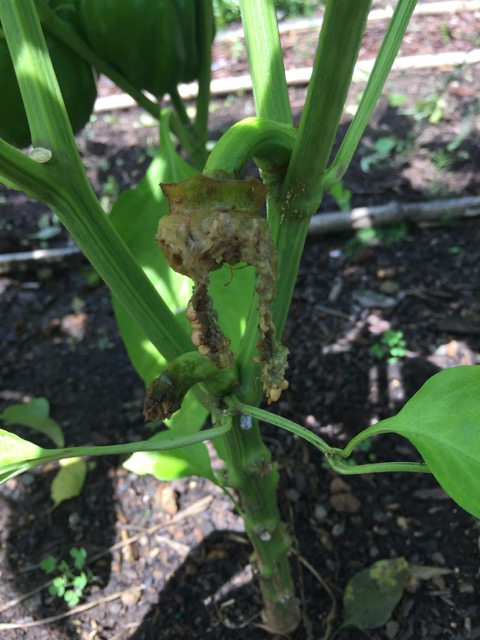 It looks like a war zone in there…tomato juice everywhere, skin barely hanging on, guts splayed all over the ground. I’ll never be the same. 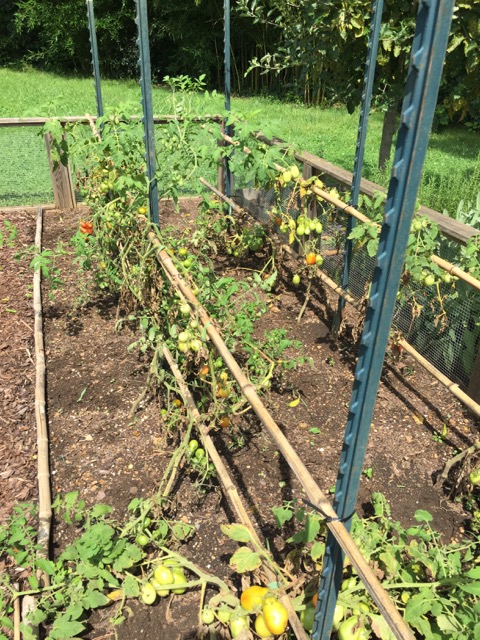 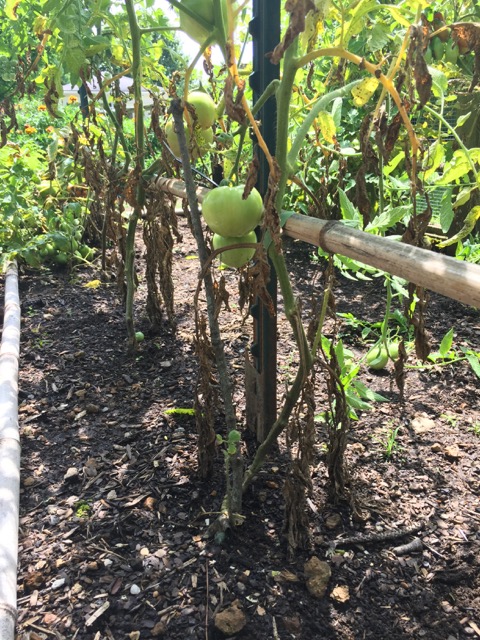 The thing I have noticed in my garden over the years is that some stuff works and some stuff doesn’t.  And every year is different.  Something that worked great one year might fail miserably the next.  It’s enough to make a person want to throw in the towel and stomp around in the dirt, but this morning, I rolled up my sleeves, put on my big girl sunhat and got down to business.  I pulled up all the old beans that were finished, all the rotting cucumbers, all the leafless basil, and most of the weeds that were slowly creeping into every available free space.  As for the tomatoes, I’m going to let them ripen and harvest as many as I can before I pull them out. 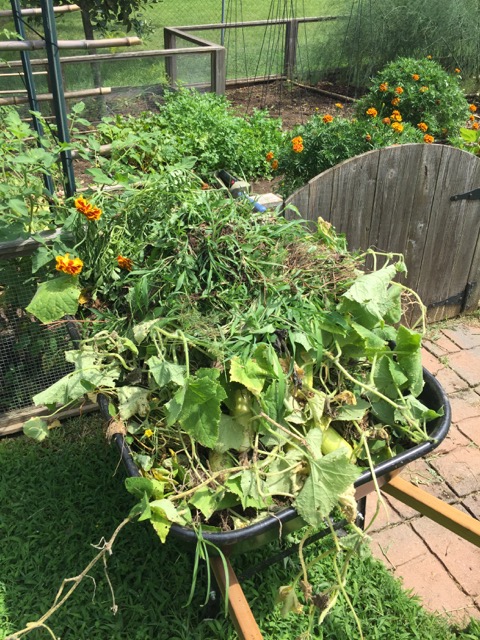 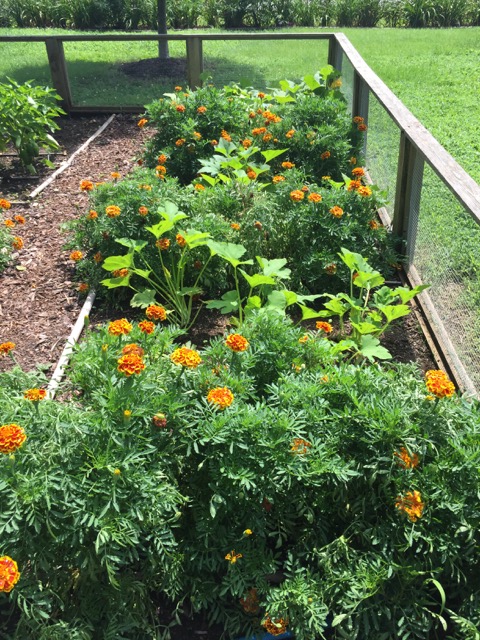 The beauty of plants is that they can be grown again.  I planted some Purple Hyacinth Beans since the hummingbirds love the flowers.  Then I planted a different variety of cucumbers that worked well last year.  This year I tried a burpless variety and could not have had worse luck with them.  I am also re-starting basil, zinnias, and 18 more Martino’s Roma tomatoes under the grow light to see if I can have a second crop that might survive.  The weather here is very warm through September so it could work.  Again, it’s all an experiment.  The flowers in the garden have been thriving with the extra rain, so I’m going to throw some color out there and enjoy the beauty even if it can’t feed us.  Sometimes that’s all we can do, take the good with the bad, and know that the sun will keep on shining. 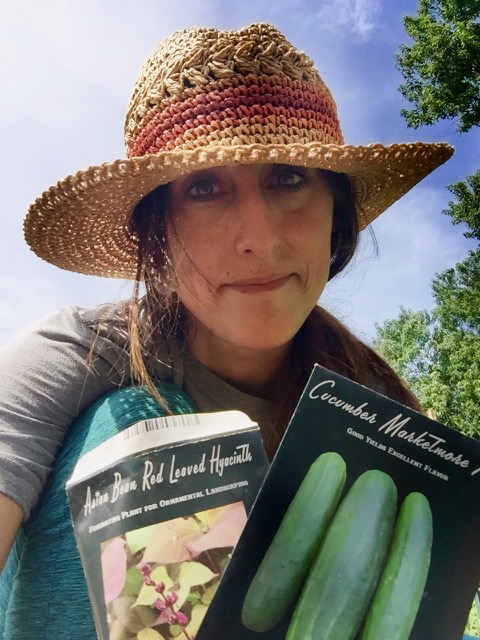